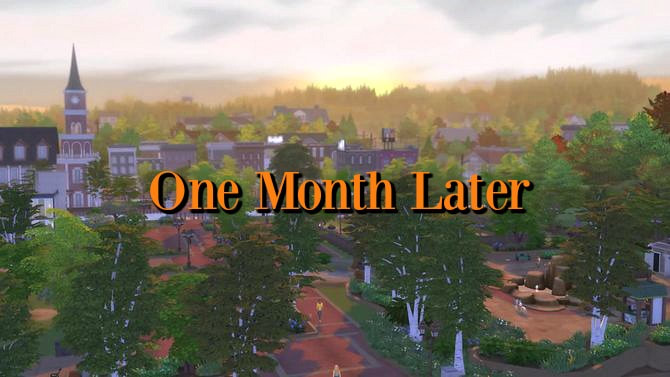 I'd been looking forward to this night for a while. Every late September, Wilder Roberts, son of the famous actor, Sean Roberts, threw a hellacious bash unbeknownst to his parents. They celebrated their anniversary in the UK, and Wilder would have the huge mansion to himself and his friends. I was never important enough to be on that guest list, though. Wilder was four years older than me, but this year, I was dating his younger brother, so yeah, finally, I was in. I'd always heard about it from Briar since she'd go with her boyfriend, Daniel, Wilder's best friend.

You'd think I'd get an invitation anyway, but that's not how Daniel rolled. He liked me at a certain distance. A safe one. Well, I decided I'd get back at him by inviting all our friends anyway. Wilder was nice to a fault and wouldn't balk at it. I wanted to get a rise out of Daniel, but as usual, he said nothing to me--not even a hello.

​The fountains trickled behind me as Ethan and I walked around from the back. I was a little disappointed I couldn't go with August. We hadn't seen each other much since that day I spent the night at his house. We didn't have any classes together, and I had football practice every day after school. And with working two jobs on the weekends, I was lucky to get done at the cafe tonight by 9 so I could show. Ethan waited for me. August wouldn't.

Pointing, Ethan said, "There he is, so you can stop pining away."

I snorted. "I'm not pining away. We just haven't seen much of each other is all. I'm glad he made it."

"Yeah...and it looks like he's having fun with Chase already." He said it with a tone that sounded like they were together. 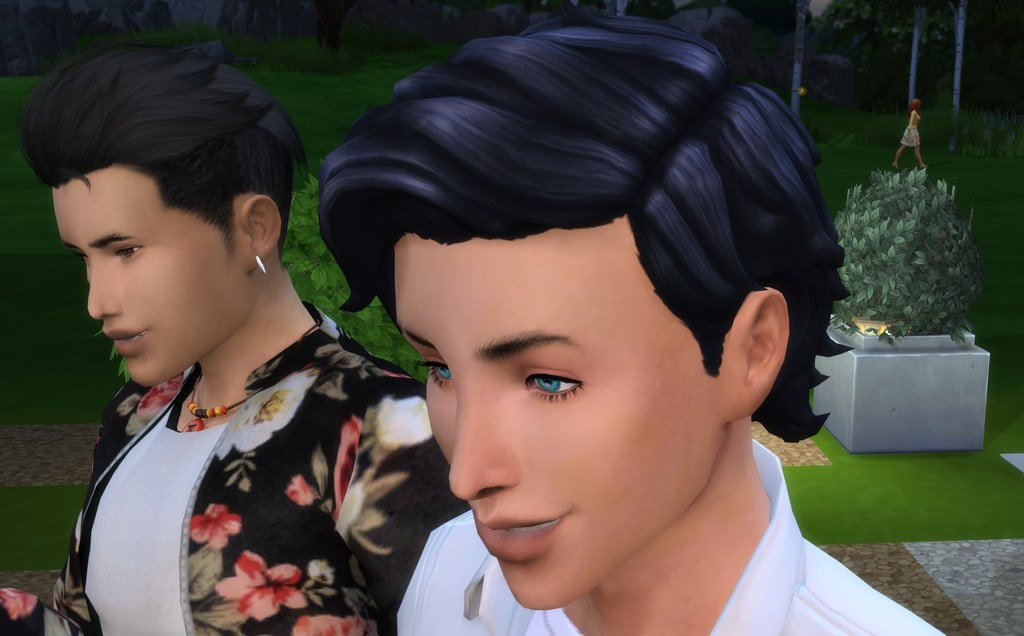 "They're just friends, Ethan. God. Just because a guy is friends with a gay guy, doesn't mean he's gay. You should know that better than anyone. I know August, and I can tell you this. He's as straight as you are."
​ 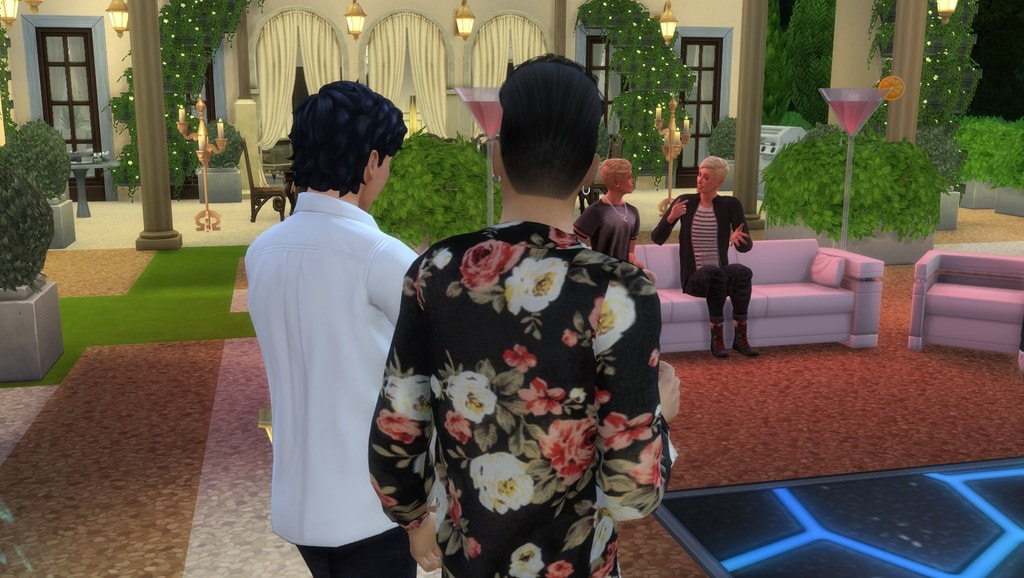 His eyebrow arched. "Then why is his arm around him?"

The hairs on the back of my neck froze, watching them. "H-He's always like that. August is just super friendly. That's a bro move." But I wasn't sure. They were too close for my comfort. Inside I was thinking, "Hey! That's MY best friend. Only I can be that close with him." Shit. Why was I so jealous? I had a boyfriend and a great best friend. What was it about August that yanked me around? 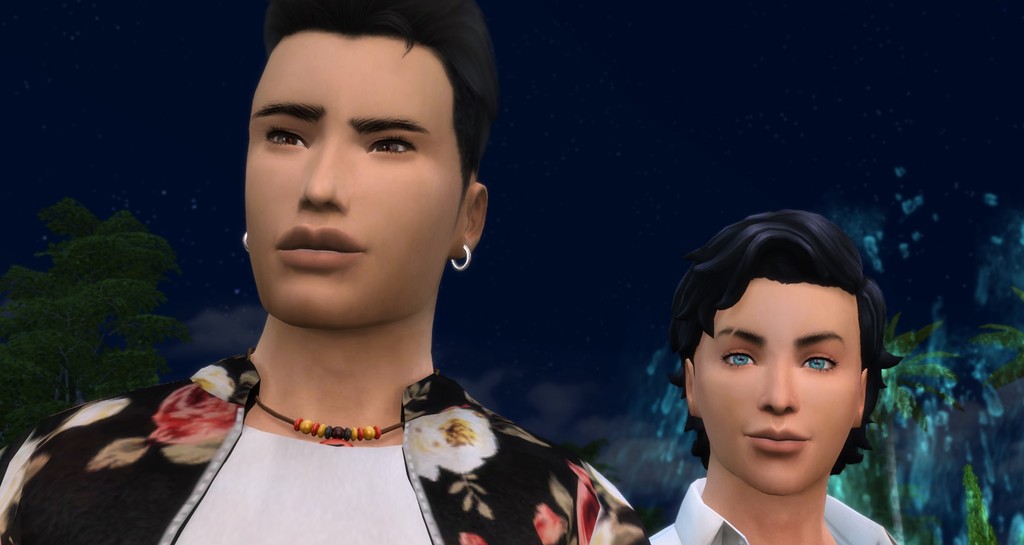 "Okay, dude, but my gaydar is going off on high alert," Ethan joked. I knew he wasn't serious, but a part of me thought he might be right. What if August was gay? But why would he hide it from me? Is it because he's not attracted?
​

"Wait," Ethan tugged at my arm. "Let's get a drink. That'll make you feel better." 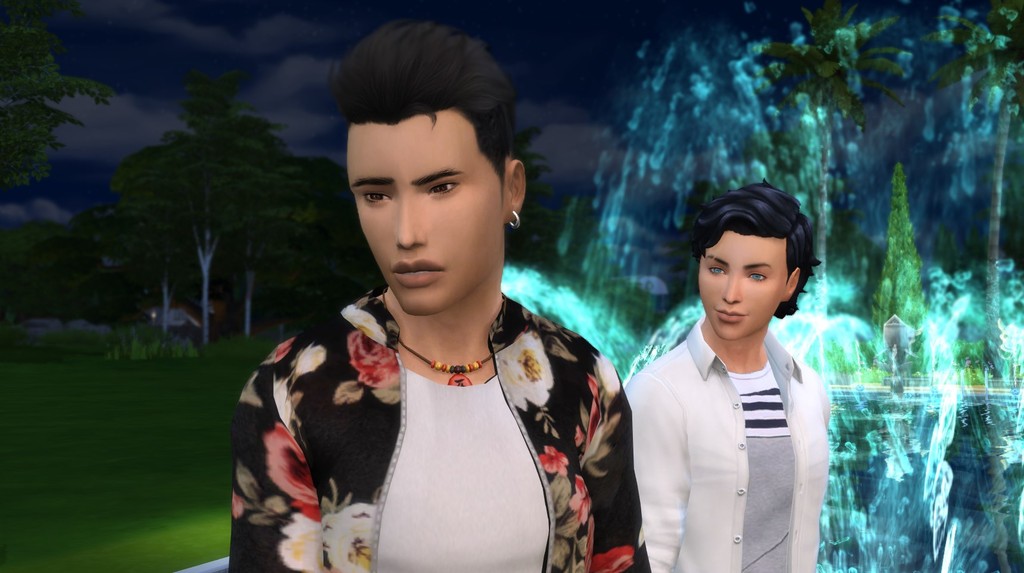 I should have wanted to see Ashton. He was sweet and beautiful and I thought perfect until August blasted into Brindleton Bay and messed with my mind. It wasn't August's fault. He didn't do anything to make me think we should be more than friends. It was just this huge crush I had on him when we were kids that wasn't going away. And seeing him with Chase made it worse.

Coming up from behind Ashton, I bear hugged him and growled in his ear.

He jumped a mile. "Shit! What are you doing, Beau?" he screeched. 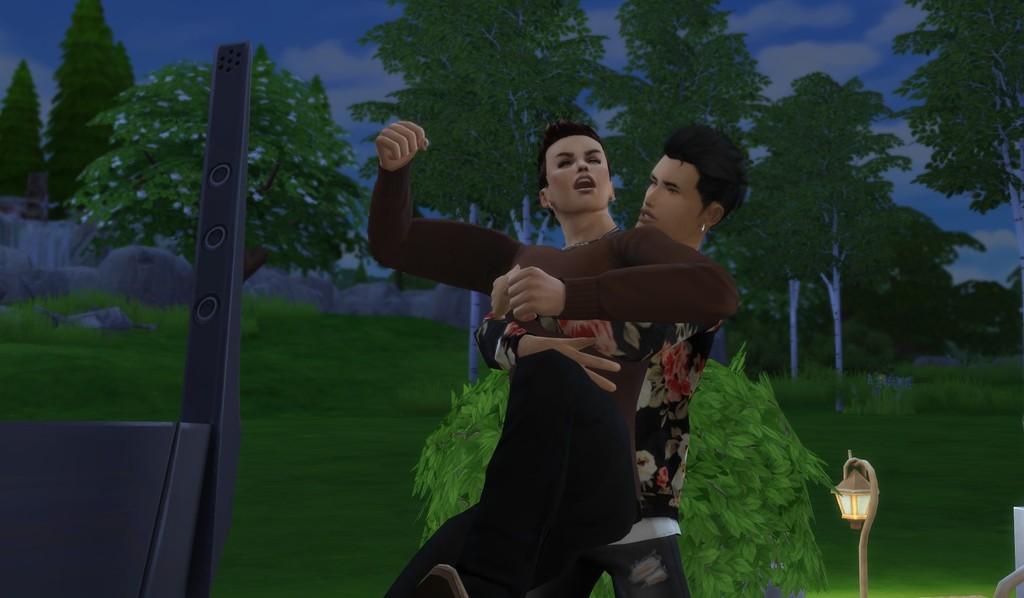 Squeezing him, I said, "Saying hello to my boyfriend. Is that a crime?"

"It is when you waited thirty minutes after you got here."

Ashton was a super jealous guy. I actually thought it was cute, but tonight it was just irritating. "You could have come and found me, you know."
​ 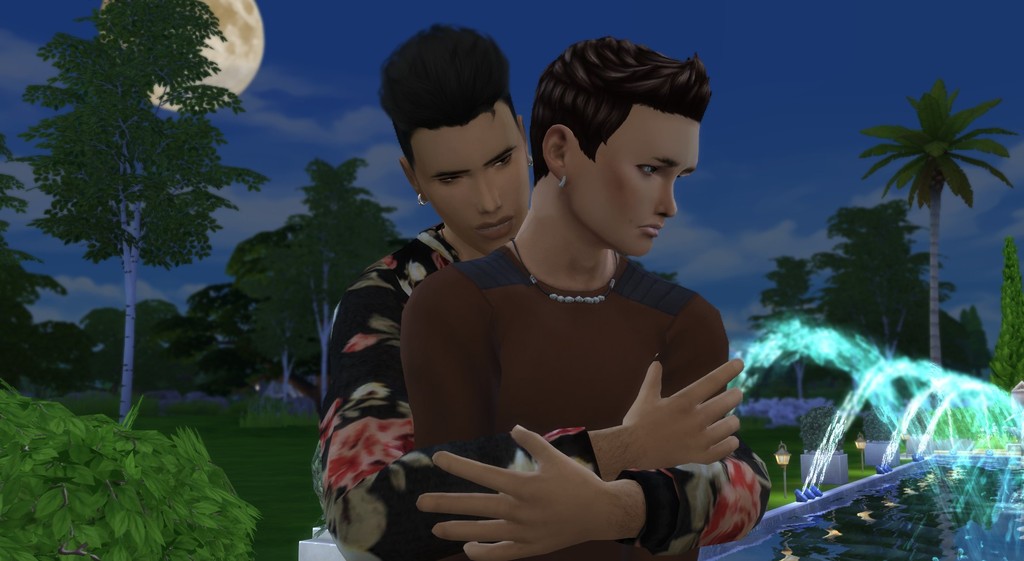 "I live here. You're supposed to find out where I am. Instead, you just want to hang out with your friends."

I blew in his ear, knowing that would melt him. "I'm sorry, babe. I'll make it up to you." 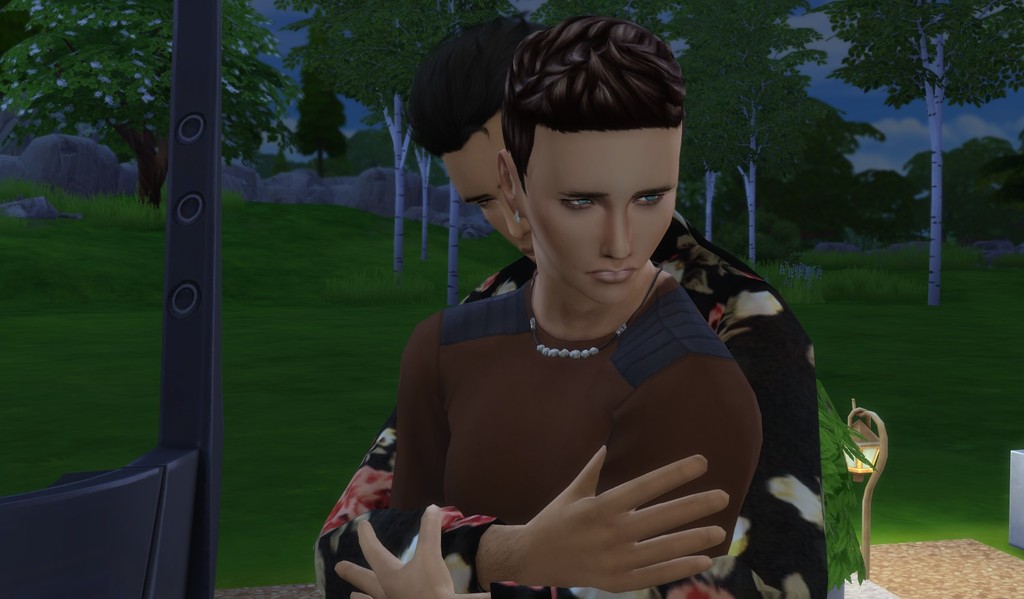 Turning him around, I said, "Really? Then you wouldn't want me to kiss you."

He giggled, trying to play like he was pulling away, but I could feel his response.
​ 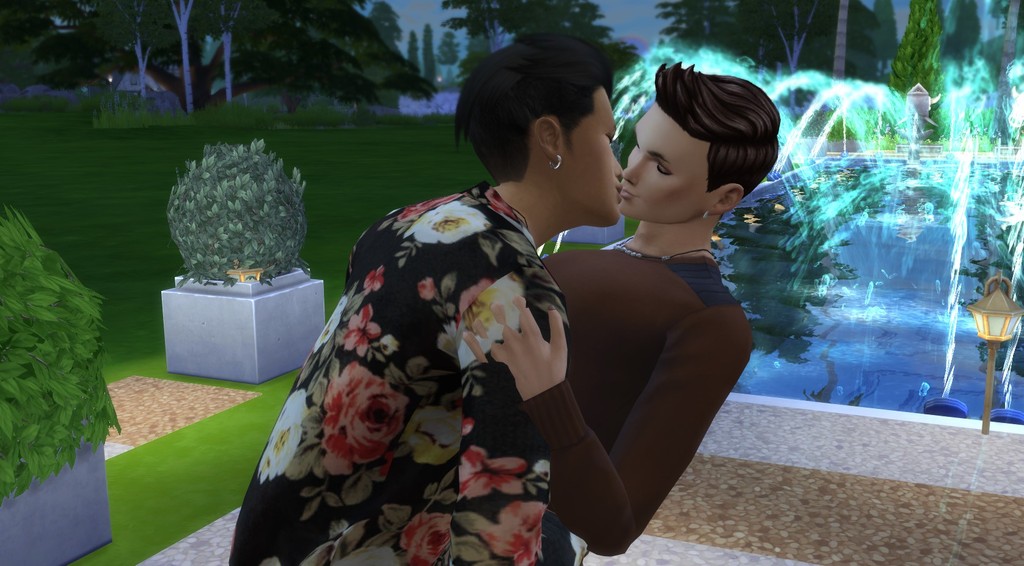 Finally, he gave in, rubbing my cheeks and slipping his tongue hungrily in my mouth. In between kisses, I said, "That's better." I was determined not to think about August for the rest of the night.
​

I was totally nervous about coming to this party tonight simply because I knew Briar would be there with her boyfriend and although I'd been curious about him, I also knew I wouldn't like it.

Chase was such a great friend and confidant about it, too. We had almost every class together and made fast friends. He was someone I could talk to about my feelings for Briar without judgement or worry. I couldn't do that with Beau. I mean, Briar was his sister and really, I didn't want him to know about my feelings for her.

And then it happened. I spotted Briar mugging down with that bastard on the dance floor. Chase and I had been joking around about school, but when I saw them, I bolted to my feet and said, "Fuck."

Pulling him closer so no one could hear, I flicked my hand toward them. "Over there." 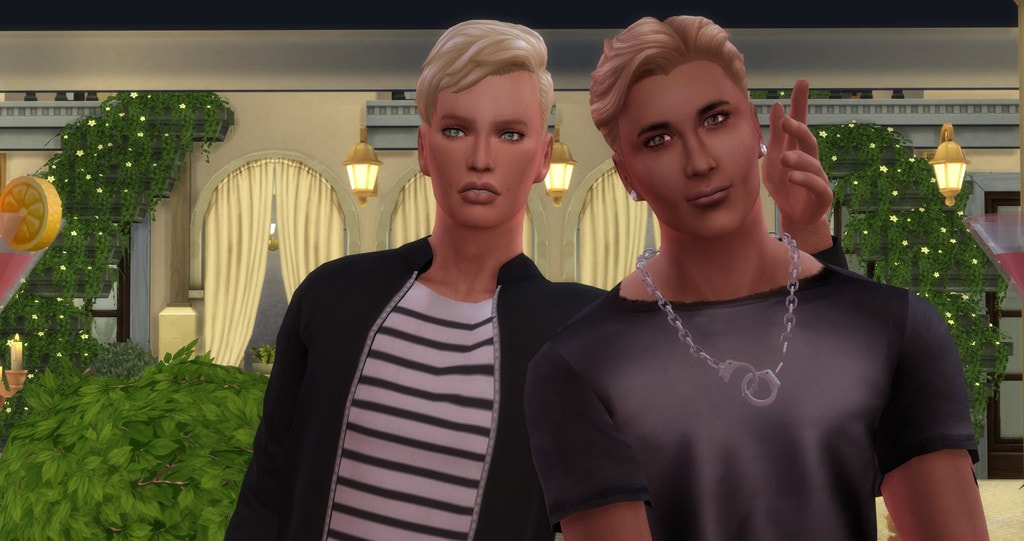 With a sultry smile on her face, Briar and her boyfriend might as well have been doing it right in front of everyone. It made me sick. 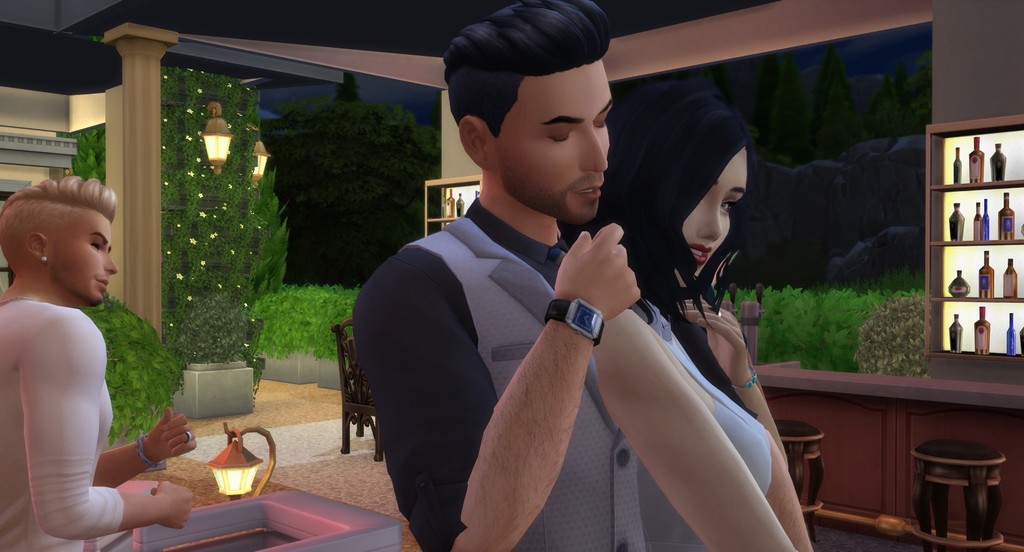 Putting his arm around me, Chase said, "There's a keg downstairs and a cool throwback gaming system. Let's go. It'll take your mind off things."

Chase was such a great friend. He always knew the best things to say. "I'd like to, but...I don't know. I think I'm gonna find a girl to talk to, you know?" 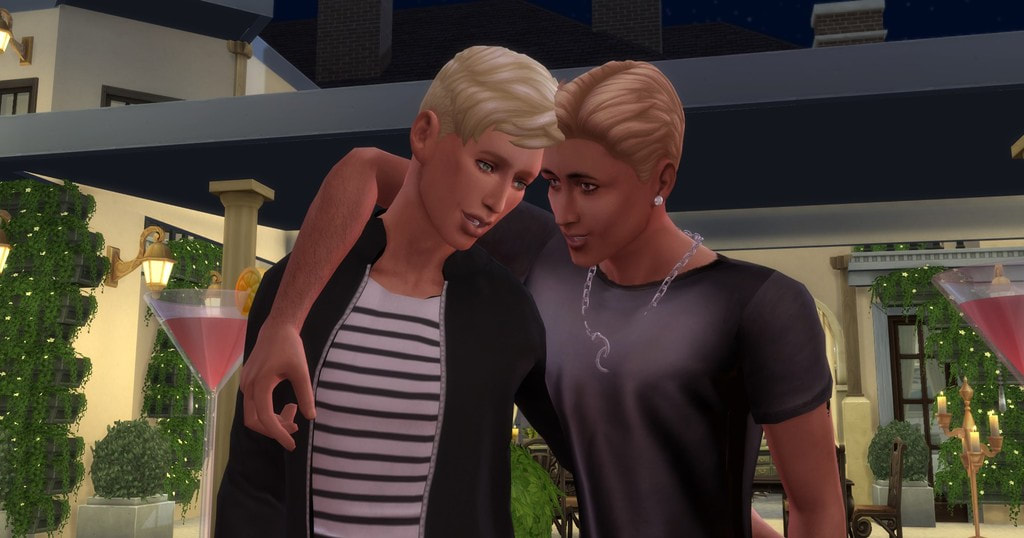 Chase told me both Amber Coleson and Etoile Amari might be in the mood to show me a good time. So, I searched the grounds for them, until I finally went inside and found them chatting on one of the many couches. The mansion was so enormous, it dwarfed any home I'd ever been in. Even though people thought my family was rich, it was nothing like the spread laid out here. There was rich and then there was the fucking, ungodly rich. Chase explained that the Roberts' owned most of Brindleton Bay and came from the aristocracy of England. I guess you could say that was as old money as you could get.

I moved toward them, hoping they'd be receptive to me. 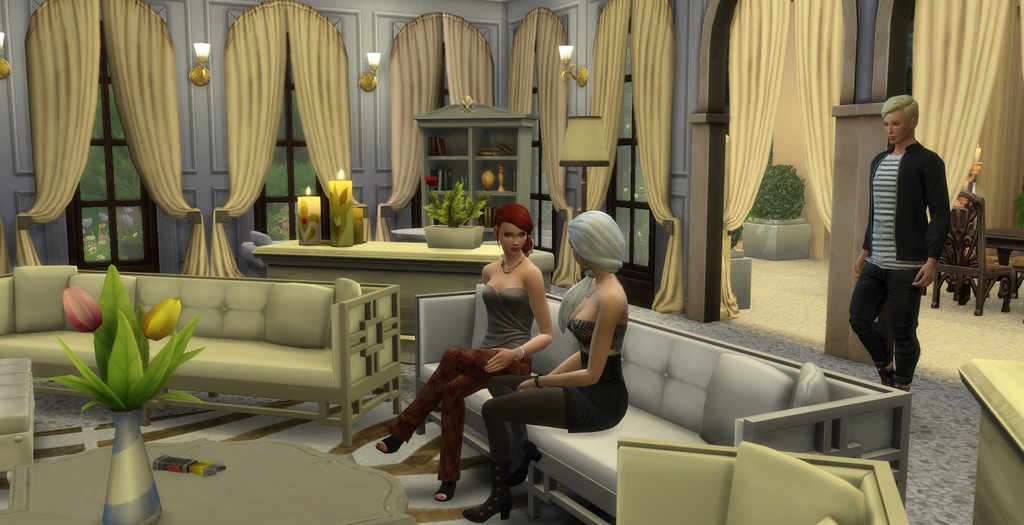 Hopping over the couch, I said, "Excuse me, ladies."
​ 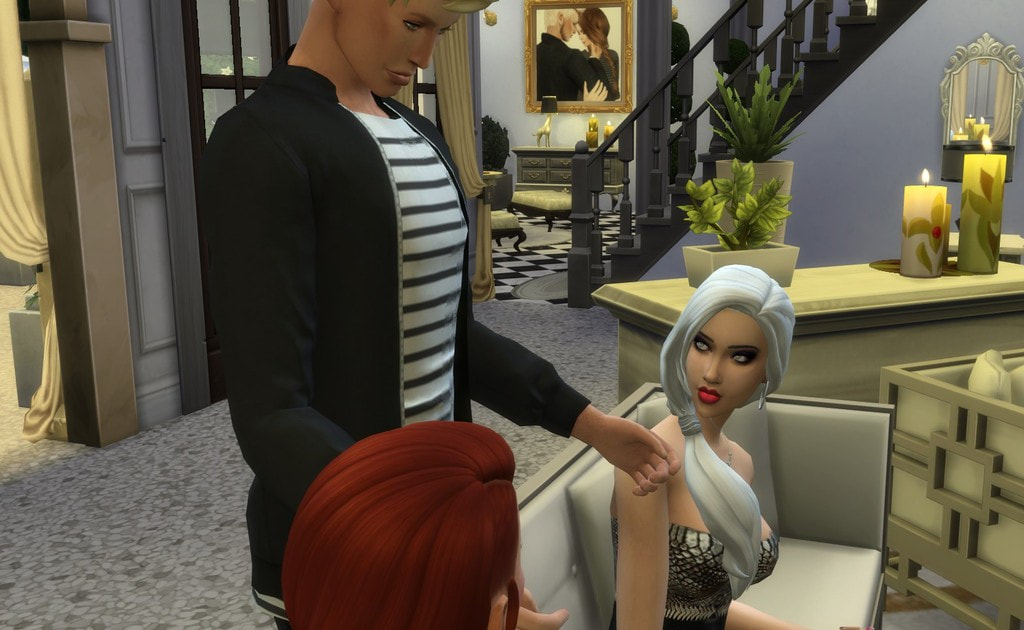 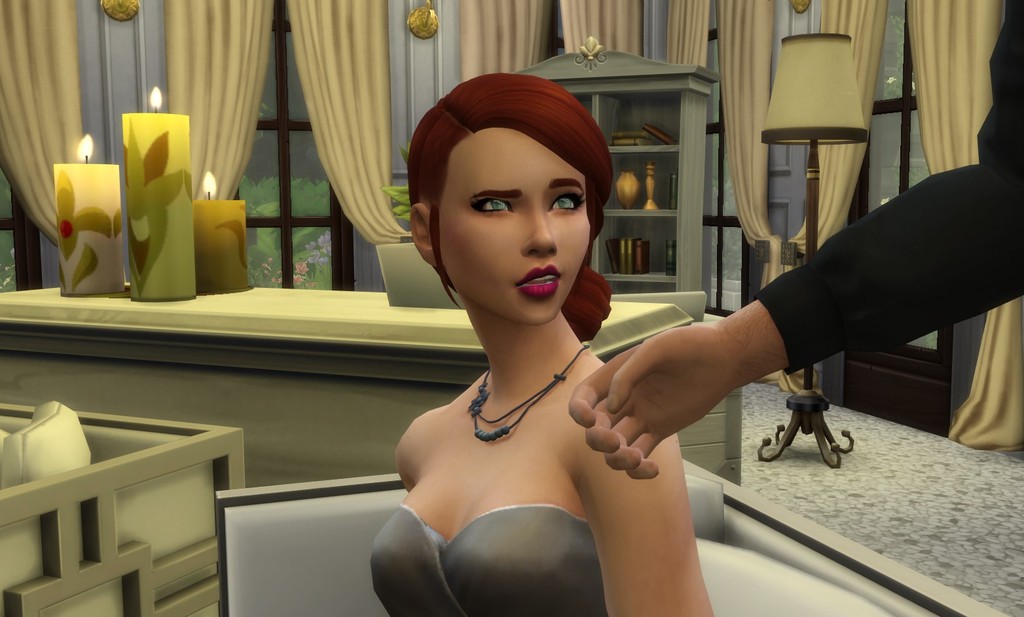 That didn't sound very nice, so I turned to the one who always had a flirt on her lips. "Do you mind if we talked, Etoile?"
​ 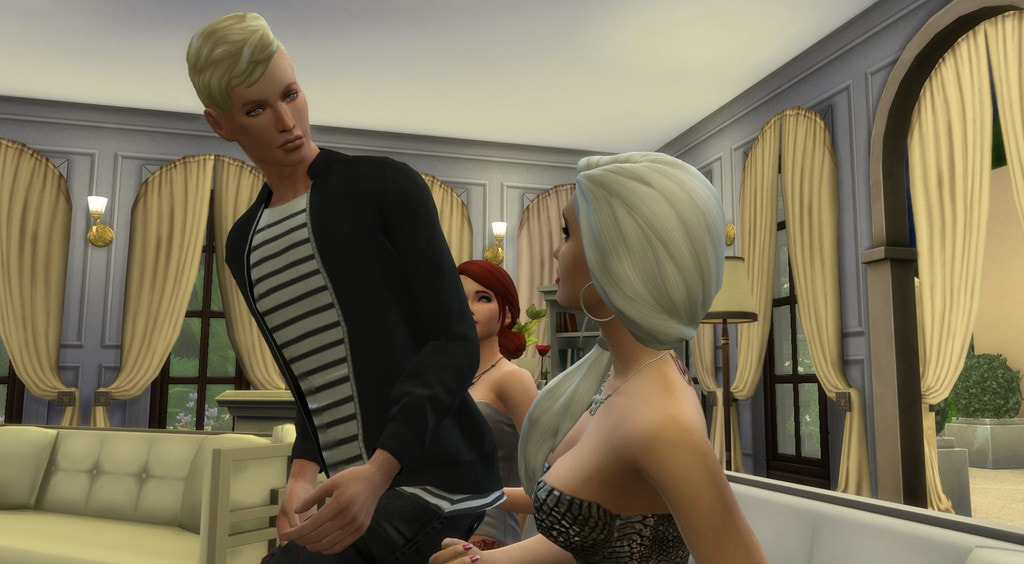 I squeezed in between them and Amber huffed, making room for me.

"I don't mind," Etoile said, looking surprised. This was different. Usually, she loved to spray out all kinds of sexual innuendos at me. Maybe this wasn't going to be my night.
​ 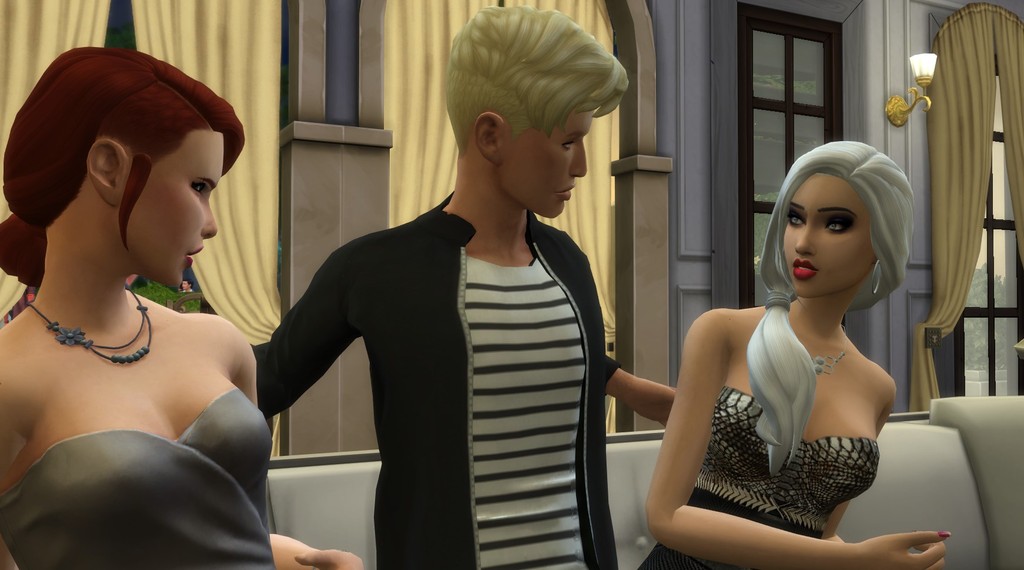 "Hey, what's your deal, August? We were having a private conversaition," Amber spat. "Now if you don't mind, you can go."
​
Yep. I was sunk, but I wasn't moving until Etoile kicked me out.
​ 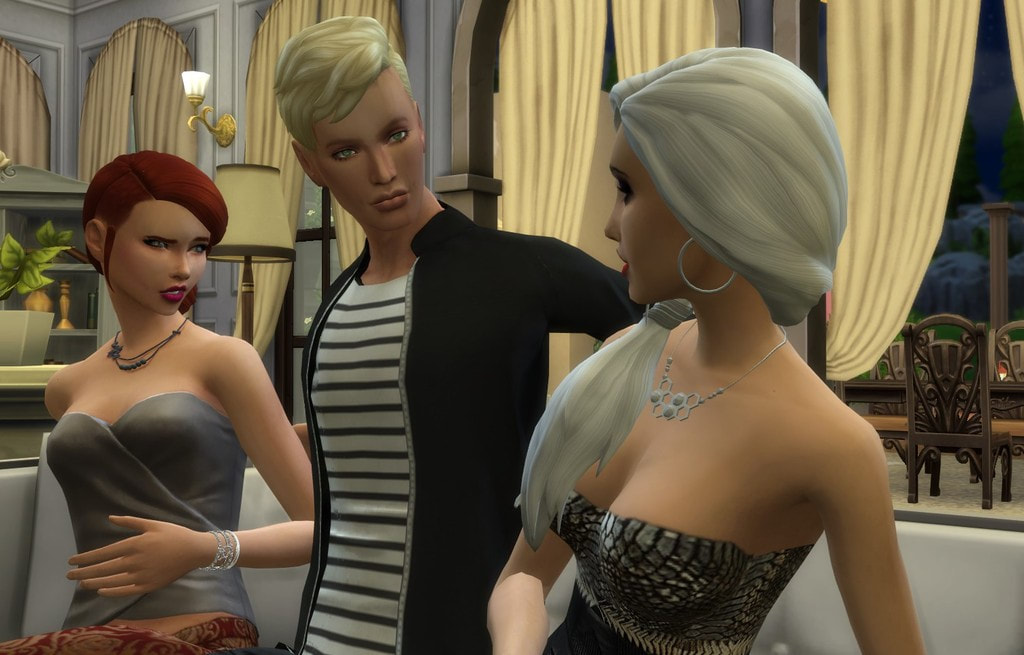 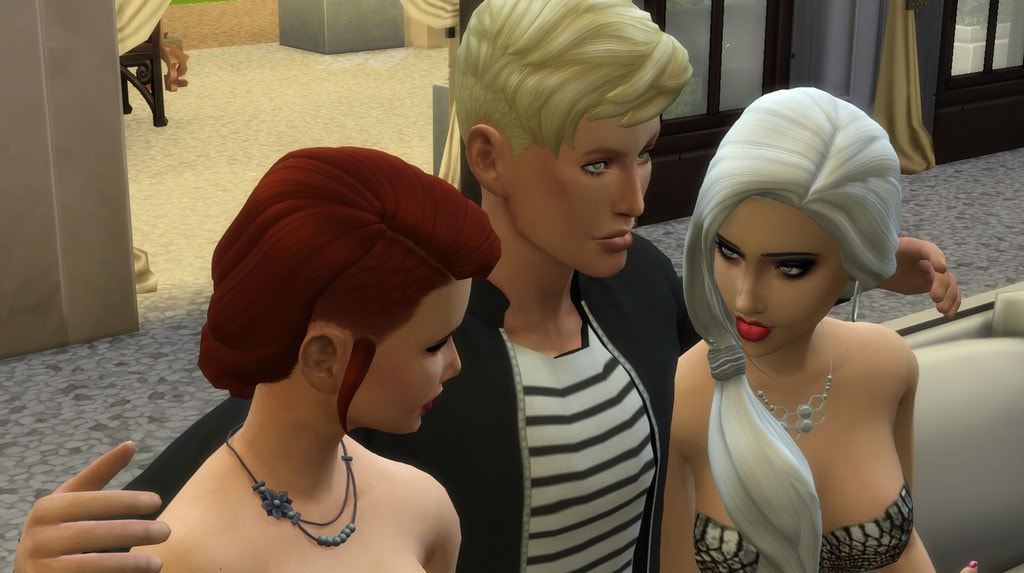 "Fine," Amber said. She telepathically spoke a bunch of messages to Etoile that I couldn't understand nor did I care. I had my quarry in the palm of my hand. 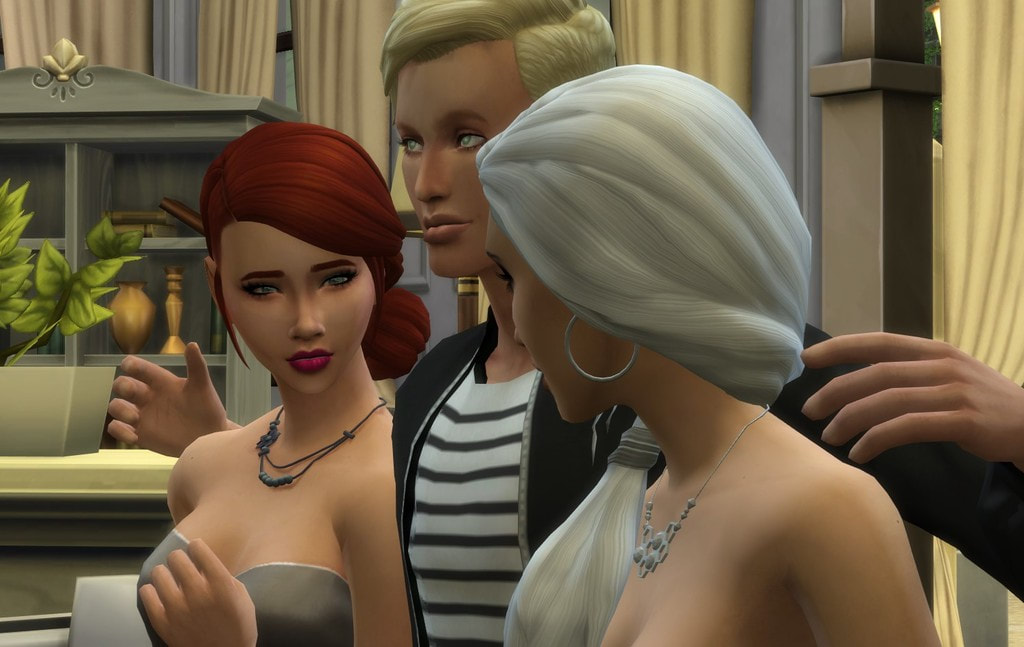 When Amber got up, she glared at me and said, "You're such a fucking jerk." Then marched away.

Wow. I didn't expect that response. "God, I'm sorry if I made her mad." I didn't know Amber very well at all, but it looked like I'd just made an enemy.

Like a cat creeping up on a mouse, Etoile said in a husky voice, "Don't mind her, handsome. She'll forgive us." The way she scratched the bottom of my lip shot fireworks through me. God she was good. I mentally made a note to thank Chase. My night was gonna fly. 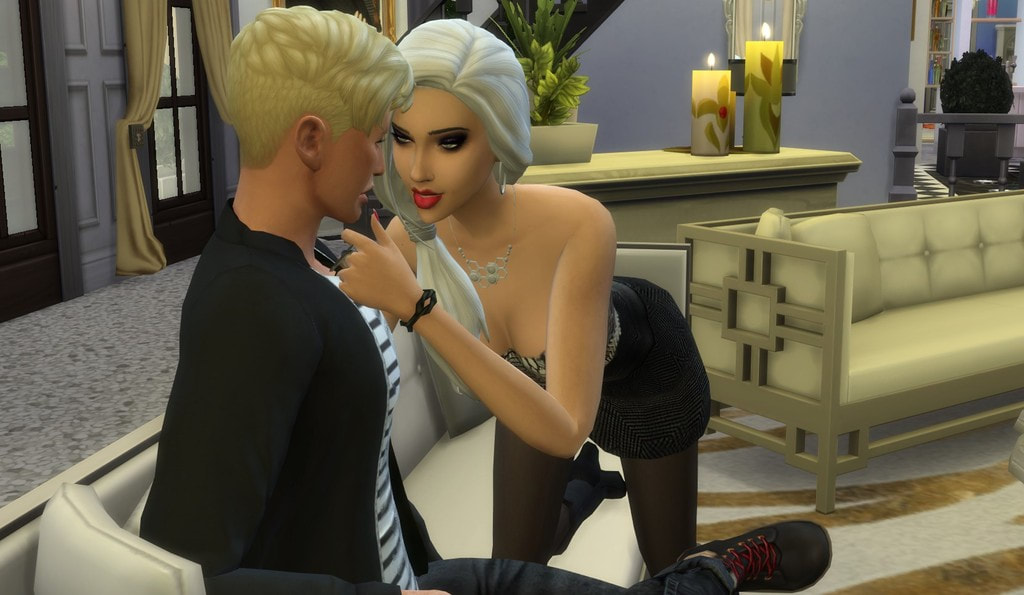 Without another word, she climbed on top of me, kissing me softly at first.
​

Then she deepened it, placing her hand on my dick as it hardened in response.

She definitely knew what she was doing.
​ 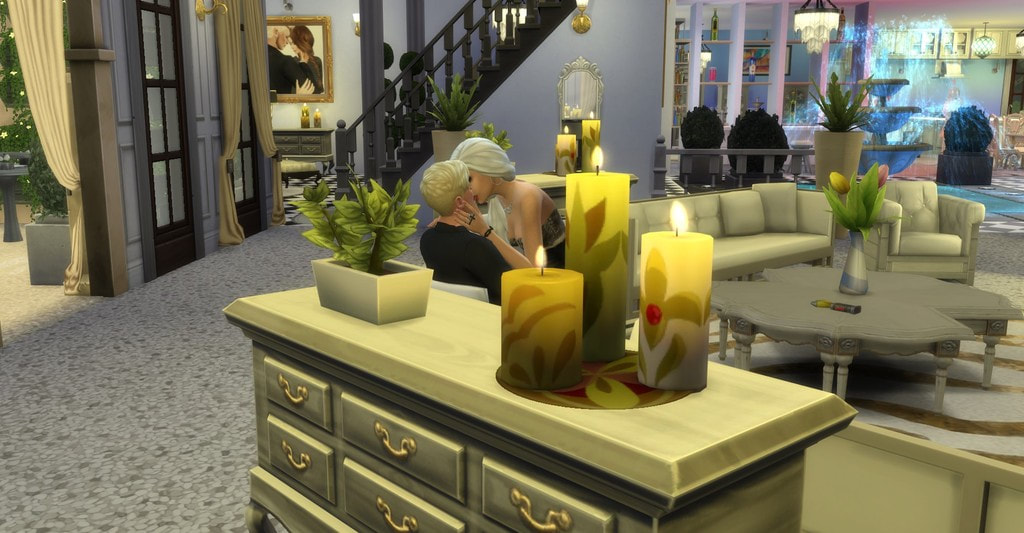