Knight’s deep voice reverberated through the gym. “We’ve discussed this, Alex, and you’re still going behind my back, teaching him to fight?”
​ 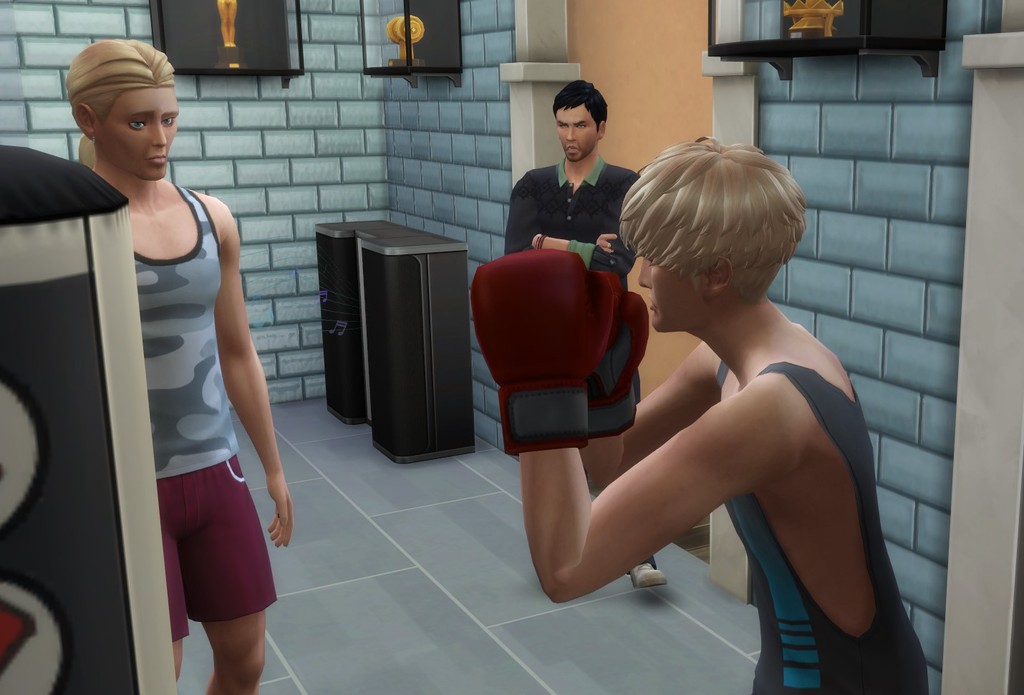 Not wanting to argue in front of Jackson, I said, “We’re done here. Shower up. I need you to take your sister to ballet.”

“But I’m meeting the guys later. We’re shooting hoops in the city tonight.”

Muttering under his breath, he stomped away from us.

“Let’s go to our bedroom, Knight. I don’t want to talk about it out here.”

Once we got into our room, I flopped on the bed, arms crossed. “Boxing is not fighting, Knight. He’s not joining the MMA. I’m not teaching him how to knock someone out. It’s just exercise.”

“I heard you in there. You said he needed to keep his feet light while punching. How is that not teaching him how to knock someone out?”
​ 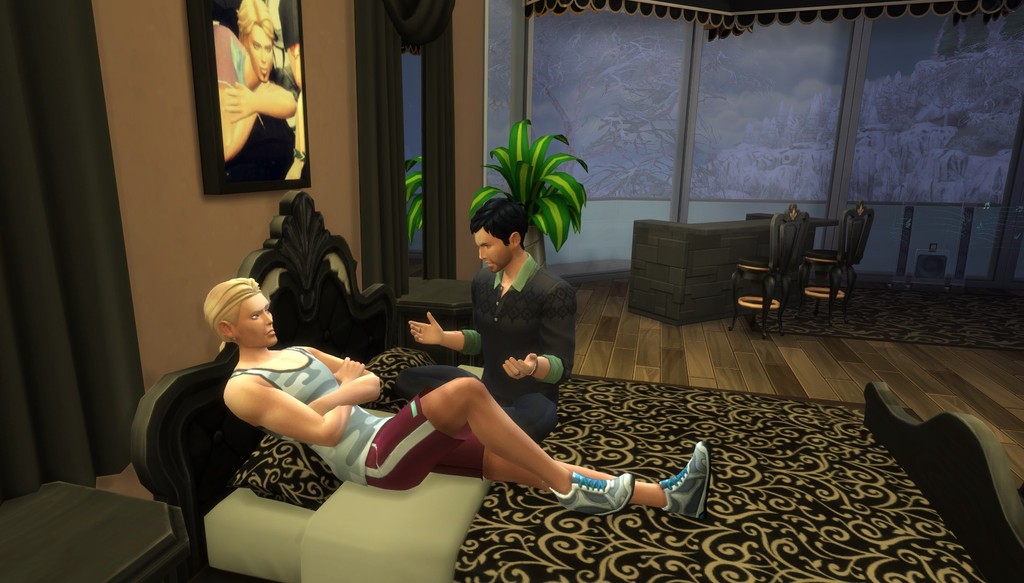 “He’s punching a bag, not a man. It’s totally different. I trained with other sparring partners. He’s not. He asked me to teach him, and I thought it’d be good for him. We have a bag in there for training. If you didn’t want me to use it then get rid of it.”

“That’s for you, Alex, and you know it. I’m not going to take your boxing bag away from you.”
​ 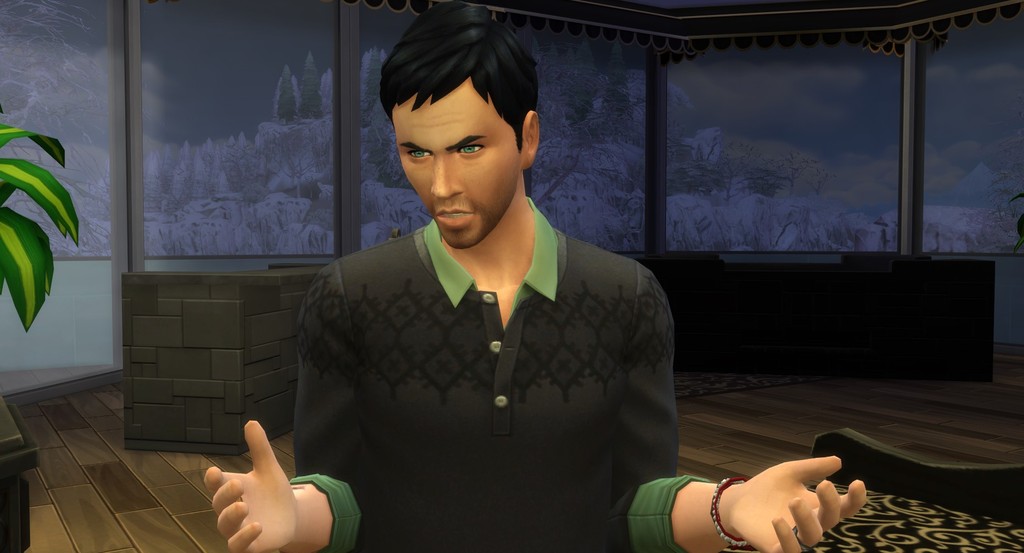 Shaking my head, I said, “You’re not making sense. You’ve never ever told me Jackson couldn’t use the bag. We’ve only agreed that I wouldn’t teach him my MMA stuff. What’s wrong with you?”
​ 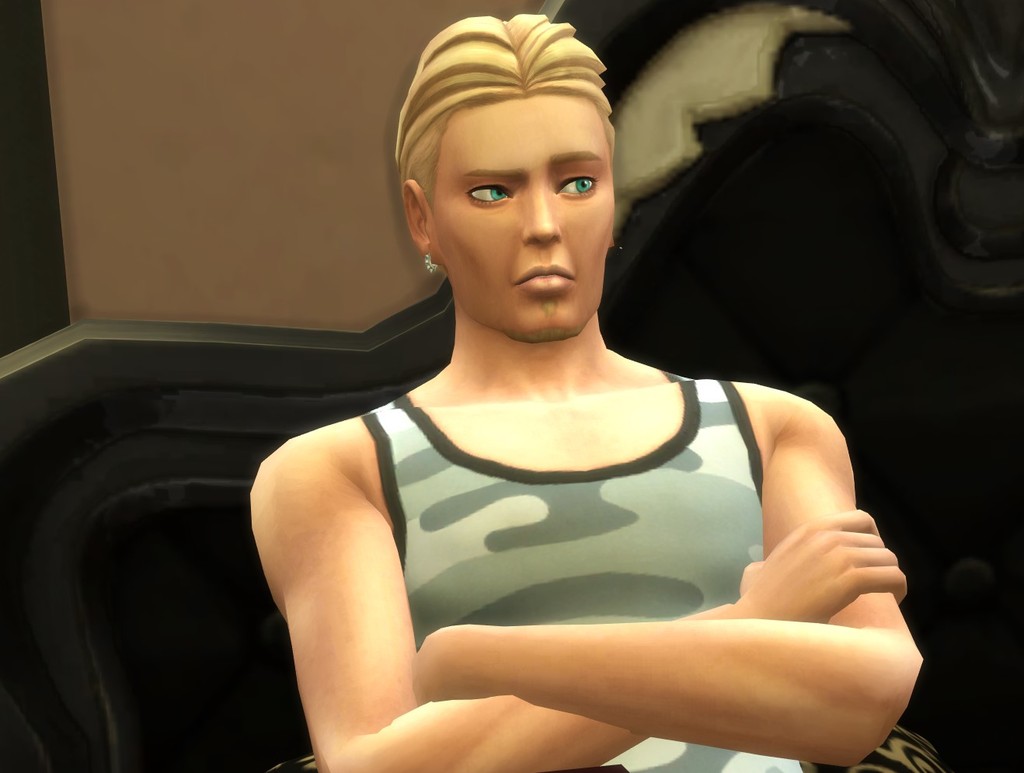 “Nothing’s wrong. It’s just I don’t see the difference between you teaching him how to punch whether it’s on a bag or a jaw, it’ll still do damage to someone. It’s not right.”

“Knight, there’s nothing wrong with being able to take care of yourself if something were to ever happen. He does need to be able to defend himself. Can you honestly say you’ve never gotten into a fight when you were his age?”

When he didn’t say anything, I added, “You’re not acting like yourself. What the hell is the matter with you?” 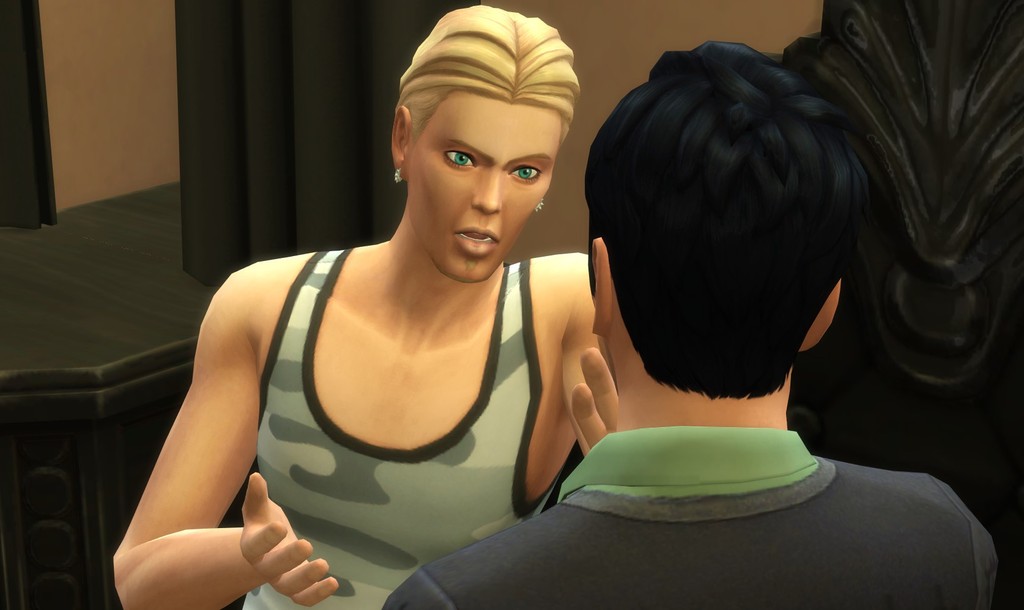 For a long moment, Knight didn’t say anything. He just stared at our comforter. His silence made me uneasy. I was preparing for the worst.

“I...I’ve made some bad investments, Alex. W-We could lose everything. The hotels, bars, restaurants...even our house.” He stuck his thumbs in his eyes like he was trying to ward off tears.

I breathed a sigh of relief. I thought he was going to tell me he was having an affair. Taking him by the arms, I said, “Is that all, baby? You know I don’t care about money. Just as long as we have our family, everything will be okay.” 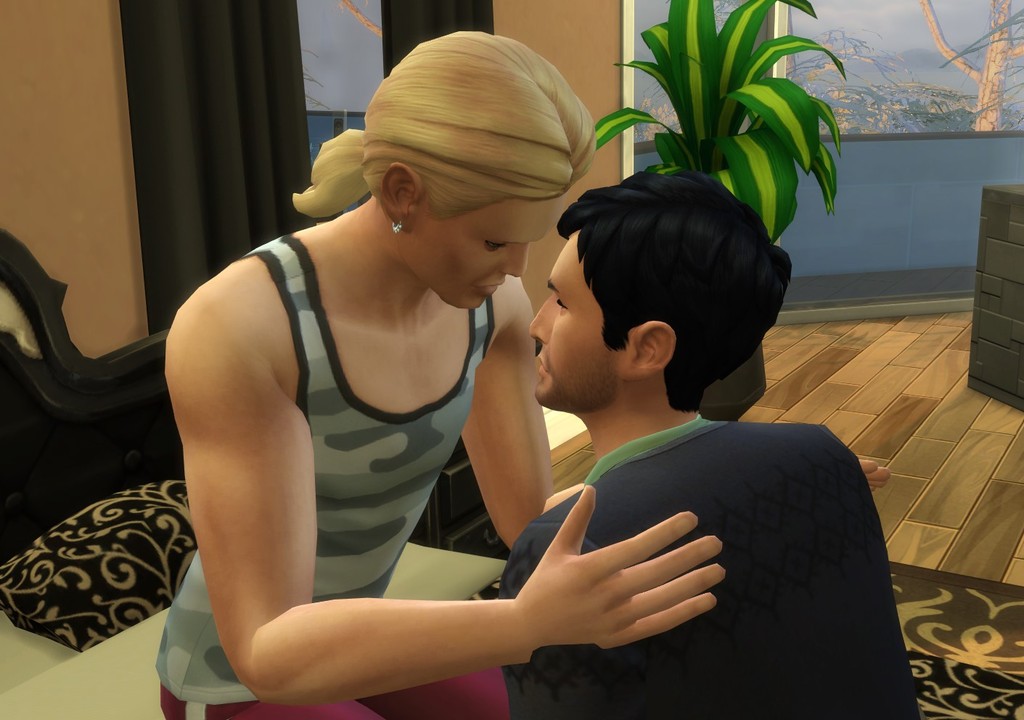 “Come here,” I said, gently. Kissing the top of his head, smelling the musky scent of his cologne, I breathed, “We’ll get through this together. Okay? No one is going to take our house. It’ll be fine. I’ve got money that’s separate from the legacy. You know that. Right?”

I knew what the legacy meant to the Richardsons. It was more than just money. It was decades of building an empire that connected all of these generations of heirs. And for the whole thing to come crashing down would kill Knight. Wrapping my arms around my husband, I ached for him, wanting to make everything better, but I knew I couldn’t. All I could do was love him.
​ 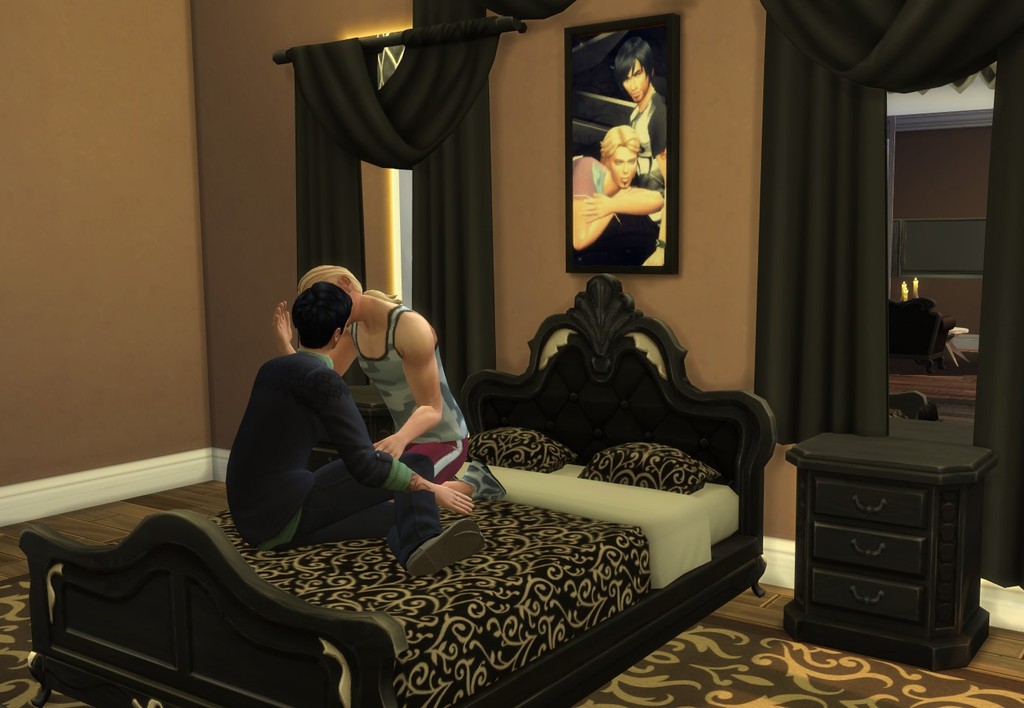 After I got ready, I glanced at my phone again, so happy Ro was talking to me.
​ 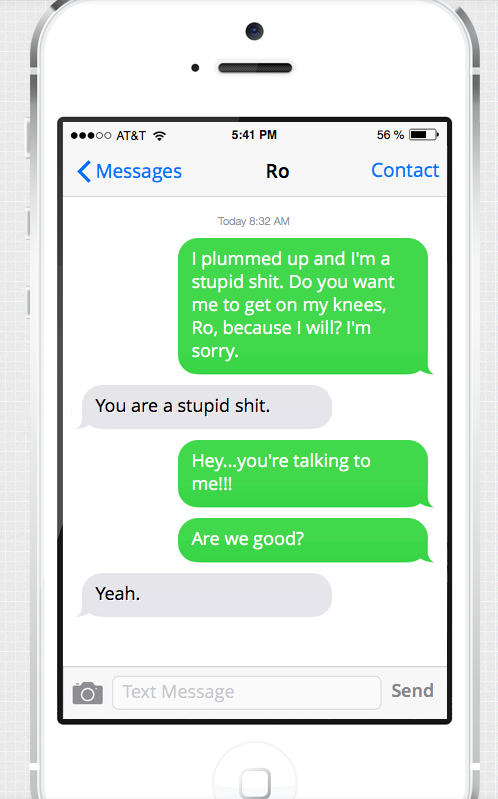 “Are Daddy and Pops going to get a divorce? I heard Pops yelling at Daddy.”
​ 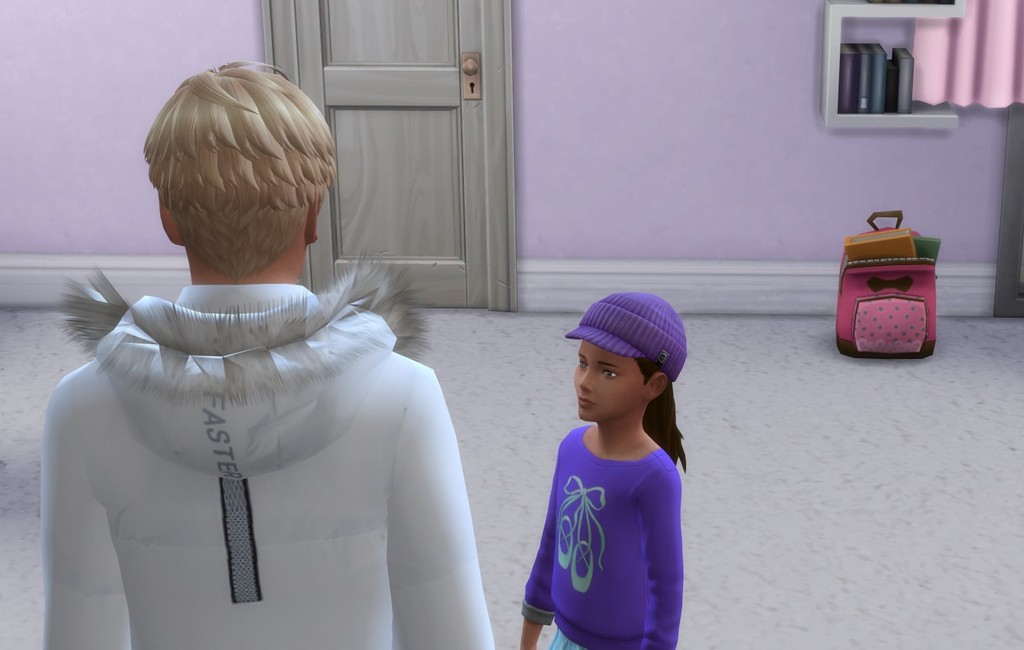 “No, Monkey, that’s just what parents do sometimes. They discuss things.”

“They weren’t discussing. They were yelling. And my friend, Jenebre Parker said her parents yelled at each other, and then they got a divorce.”

Putting my arm around her, I said, “Well, Jenebre Parker doesn’t know everything. Our fathers love each other very much. More than any other parents I know, so you don’t ever have to worry about that.”

“It is. We’re very lucky, you know.” I didn’t add that they loved each other so much it kind of got embarrassing at times. But I’d take embarrassment over what happened to poor Jenebre Parker any day.
​ 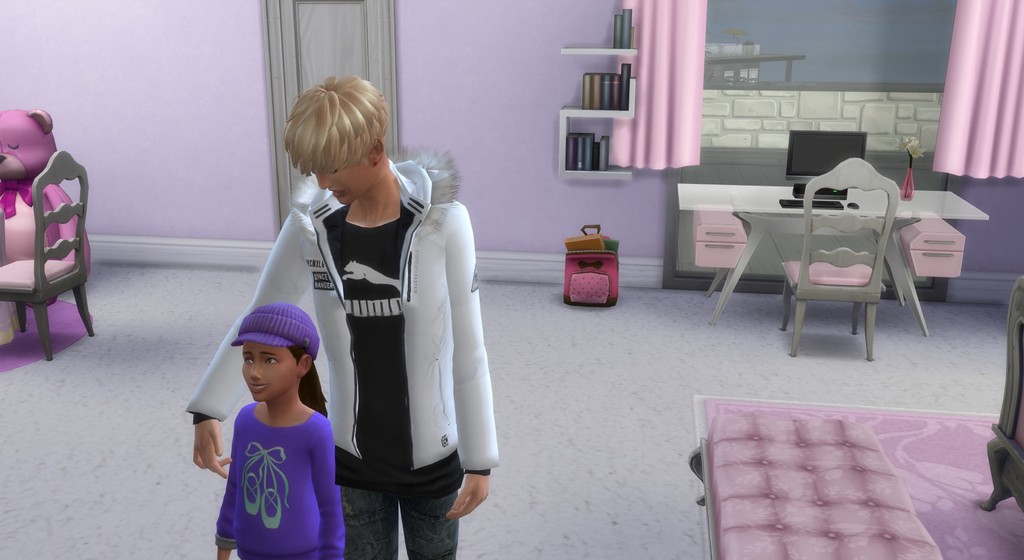 “Why isn’t Daddy taking me to ballet?”

“Because Daddy’s still discussing things with Pops. He’s going to pick you up.”

Looking up at me with her big brown eyes, she said, “I want you to pick me up. You drive faster than Daddy.”
​ 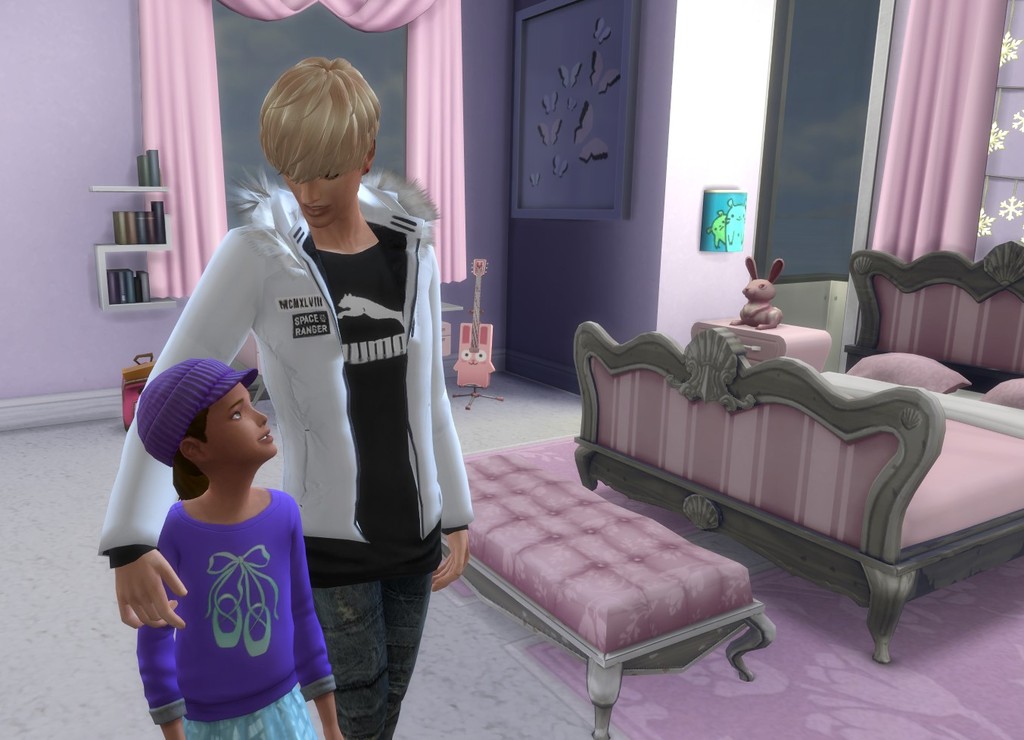 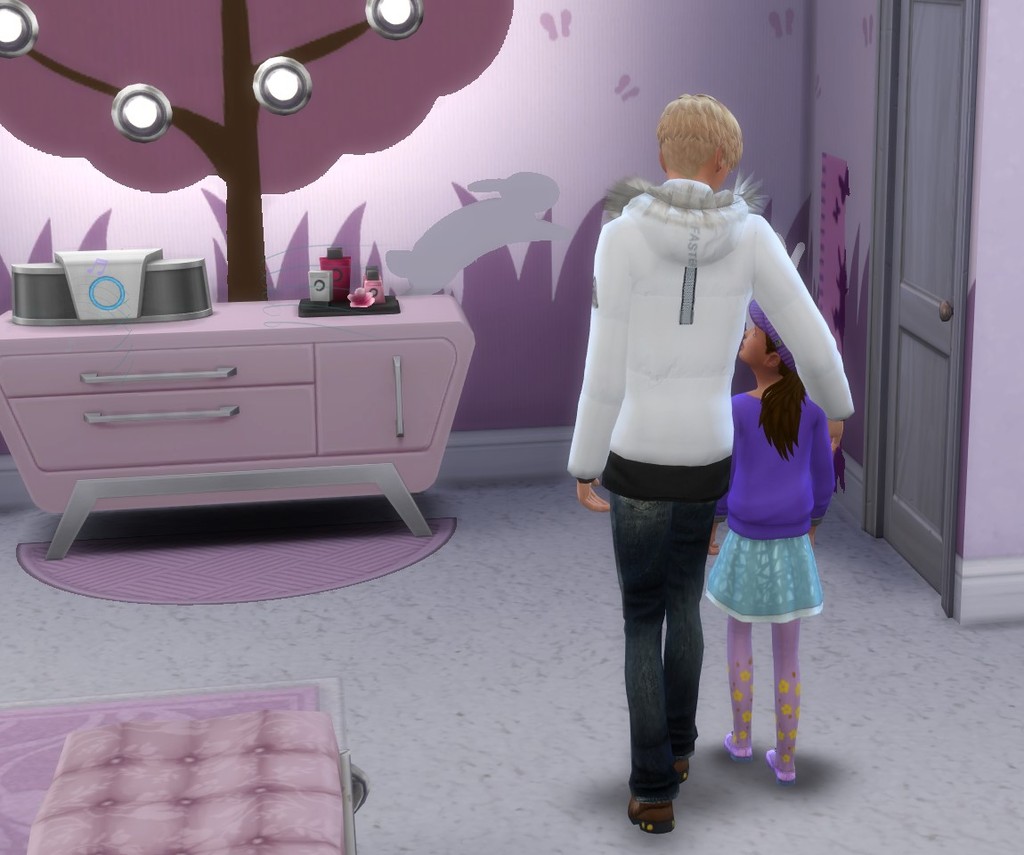 I arrived a little late since I had to drop off Dakota. San Myshuno was in full on traffic by the time I entered the city.

The guys were already shooting. I saw Ro and my stomach jolted. I hoped he wasn’t still a little mad.

“Hey, loser,” he said, smiling. “Ready to get severely squashed? You were always a glutton for punishment.” 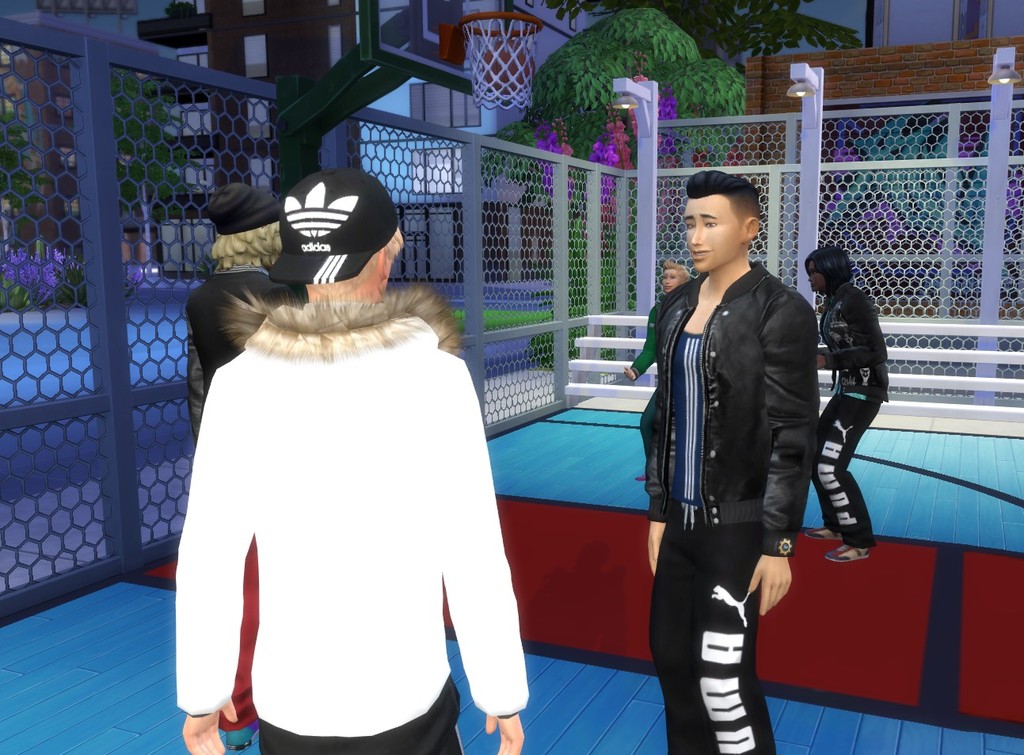 He threw me a ball.

I said, “Watch and learn, padawan. Just because you’re taller, doesn’t mean you’re better. Think about Yoda. The dude was tiny and ancient, but he had it going on once you put a light saber in his hand.”
​ 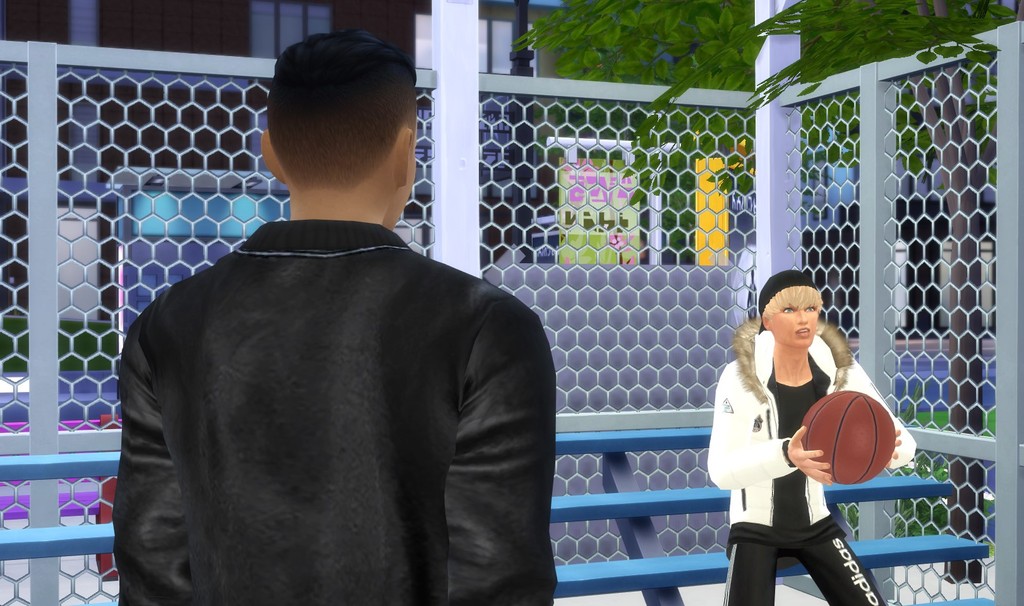 I shot. The stupid ball rimmed out.

Ro laughed. “And you were saying, Master?” 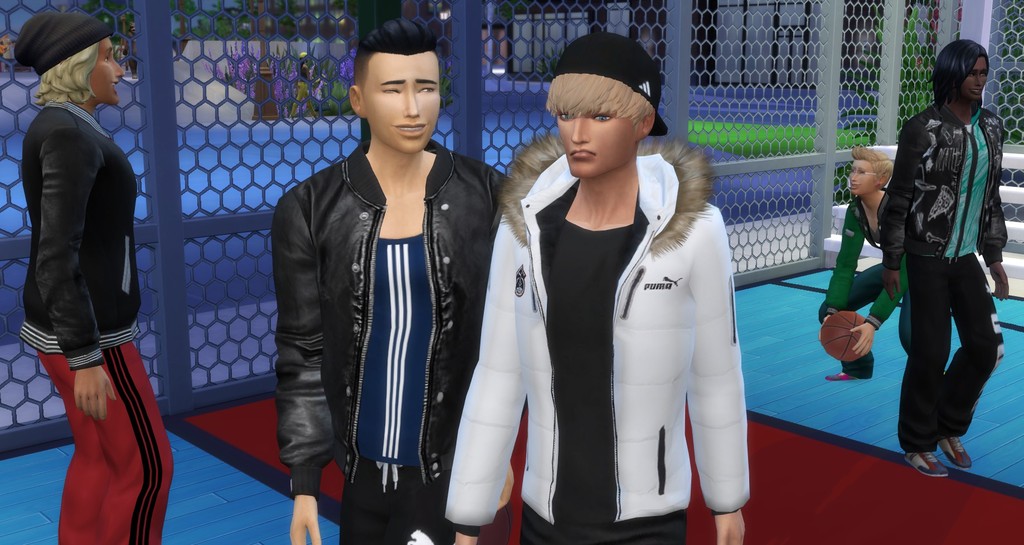 Even Pax, who was by far the worst player of us all, was beating me. 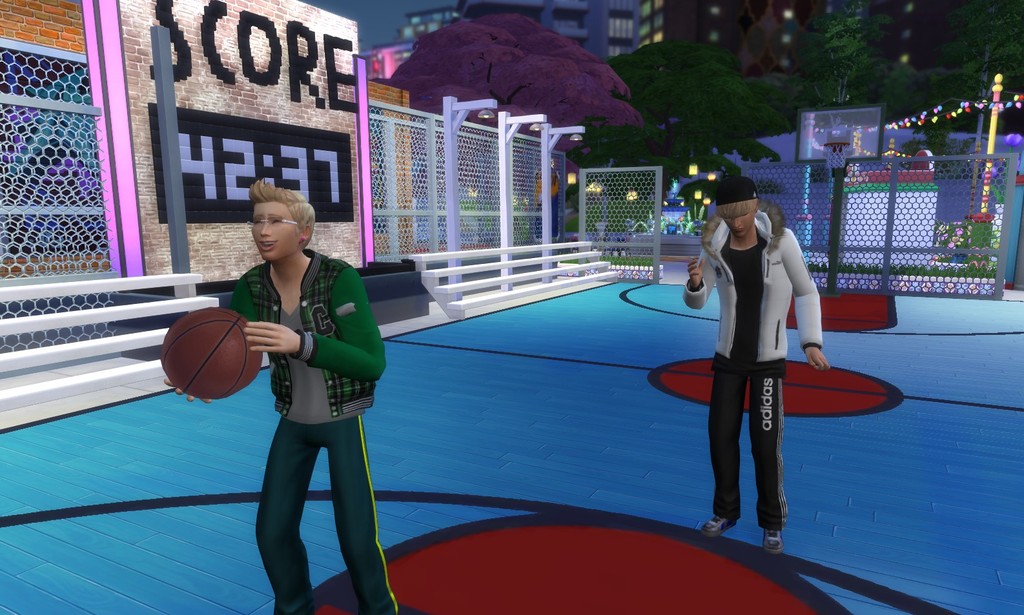 The thing swished, not even touching the rim.

“Unfair,” I moaned. “Did all of you collectively poke a voodoo doll in my honor before I got here?”

“It’s called skills, Jacky boy. Just some of us got ‘em and some of us don’t.” 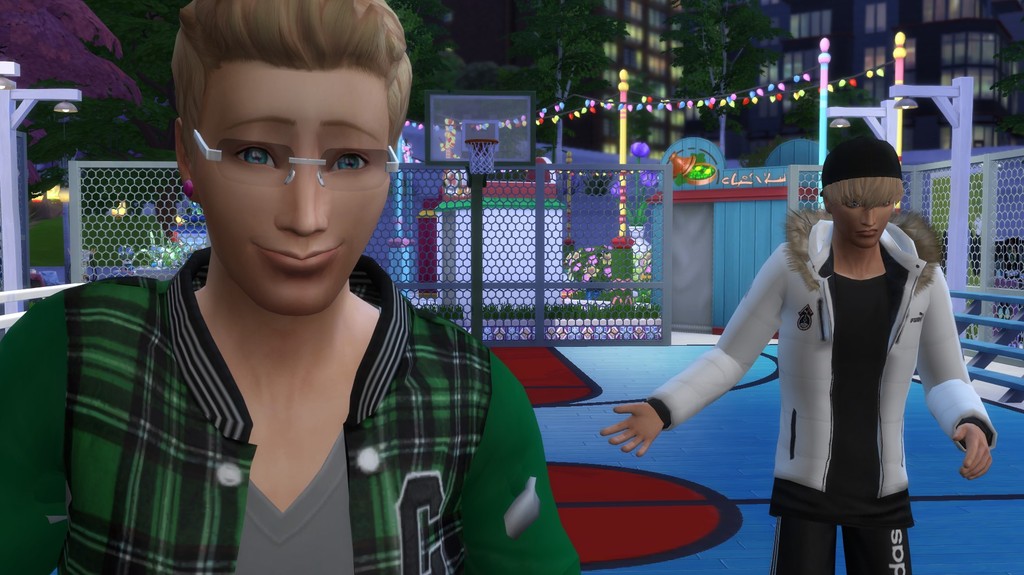 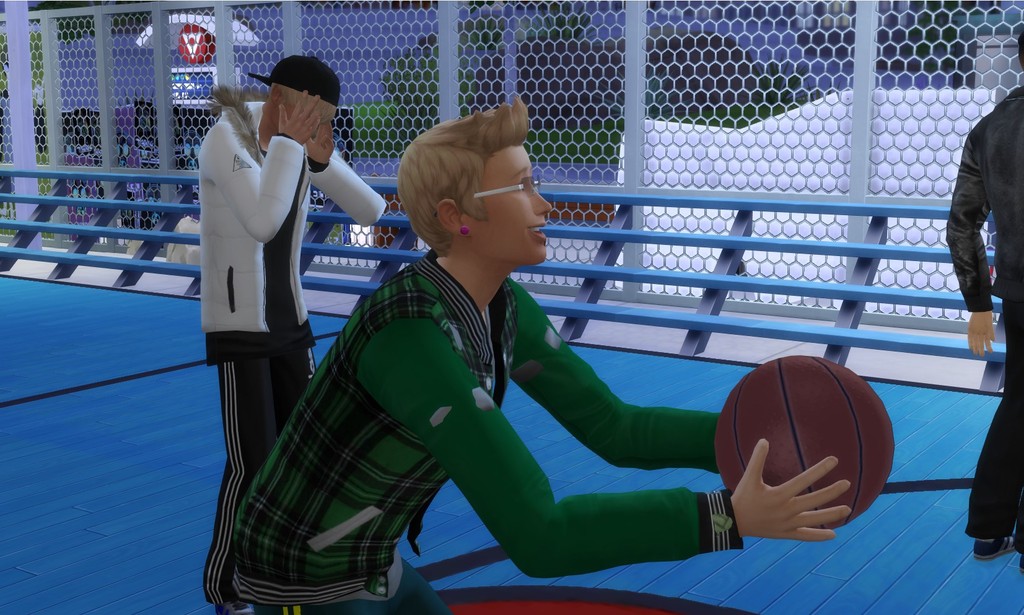 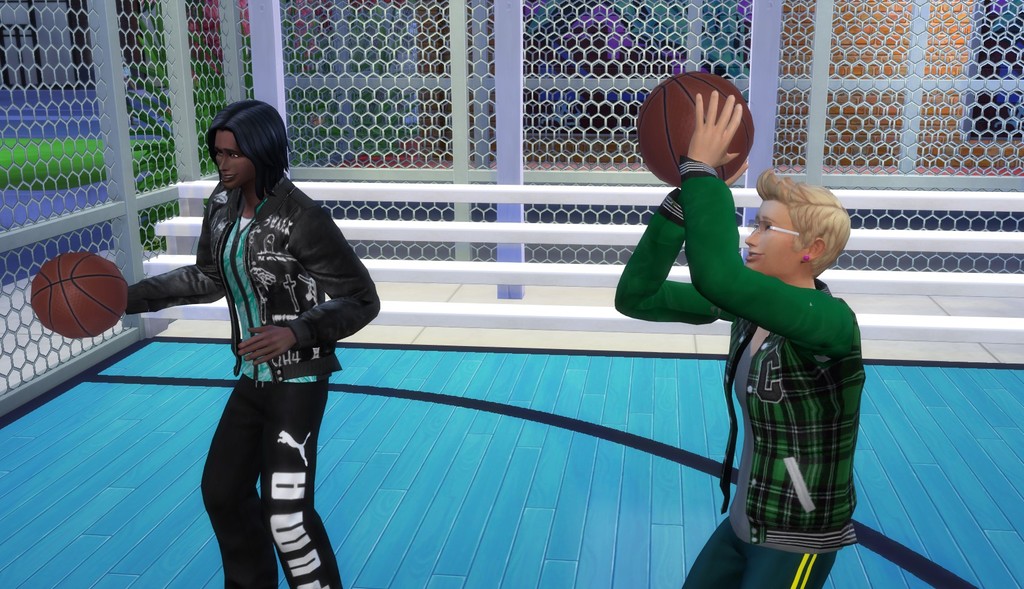 I gave up. It just wasn’t going to be my night. 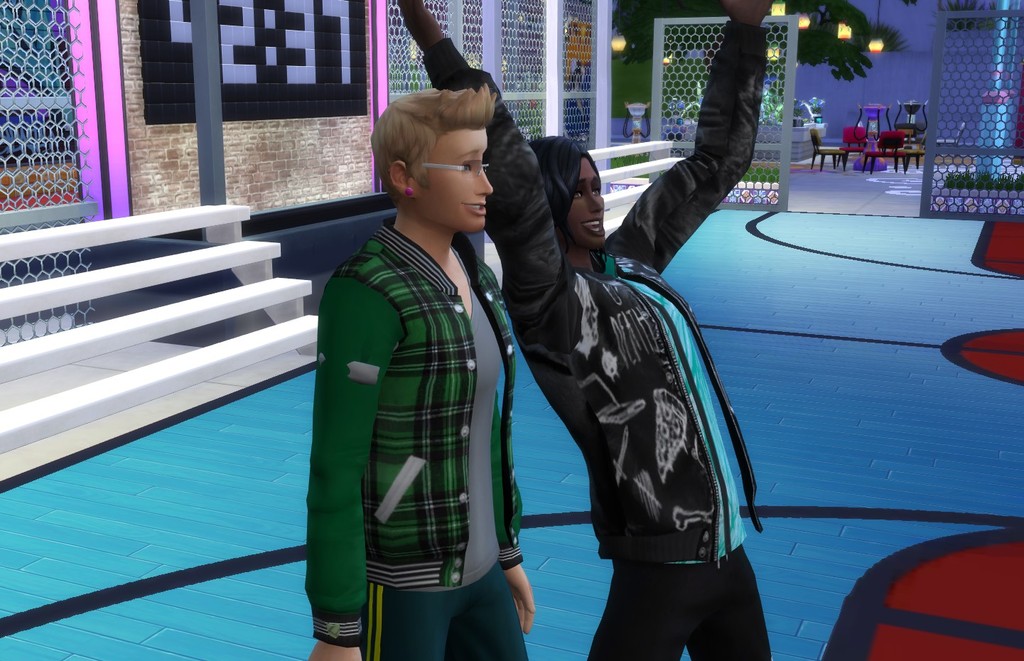 After a while, Clarke and Ro joined me on the sidelines.

“Dude, is that jerk really thinking we’re going to let him in on our game?” Clarke asked.

I put my hands in my pockets. “Looks like he just wants to talk to Pax.” 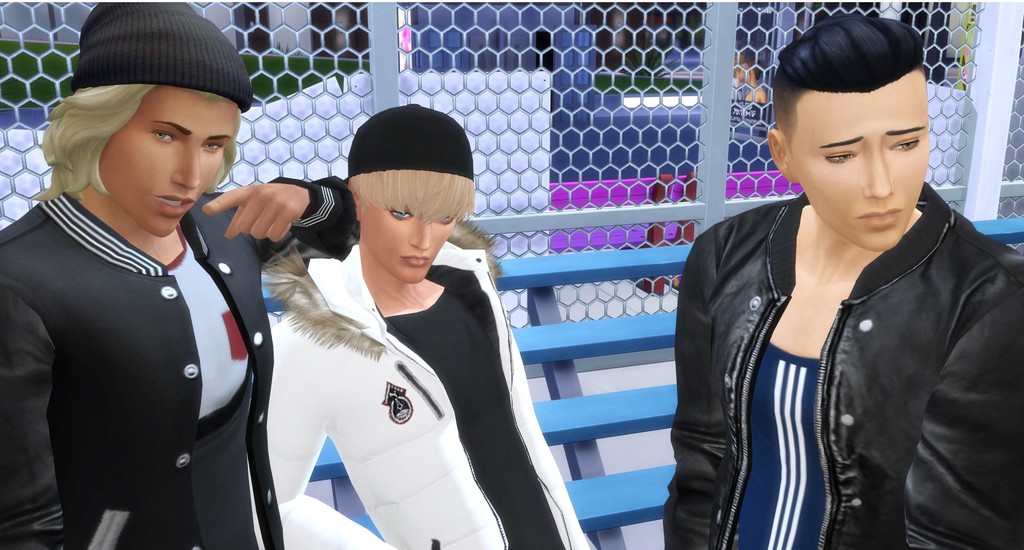 Mickey Watts never showed his face near us ever since he got Pax in trouble for skipping classes and nearly failing out in his 9th grade year. Doing drugs and God knew what else, we ganged up on Mickey and told him to clean it up or get the h*ll away. Afraid, the guy didn’t have the balls to cross us, but now...it was clear he was making a statement. My hands itched to pull him away from our friend.
​ 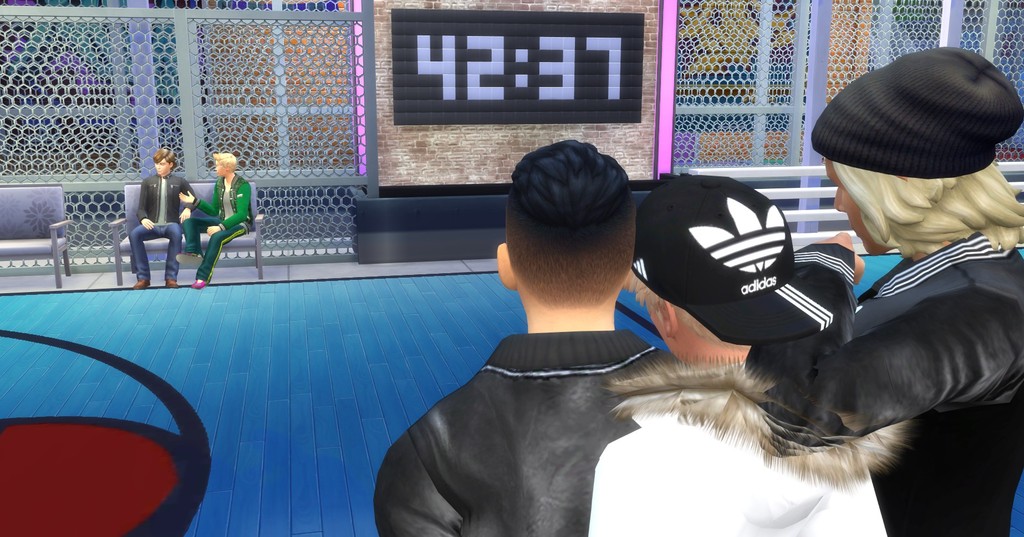