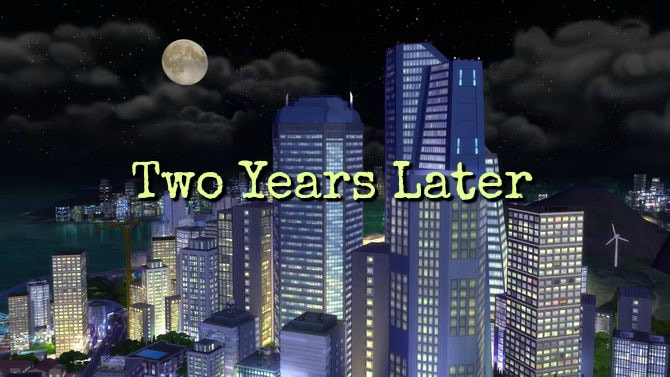 Wow. I couldn't believe the day was finally here. What Theo and I had worked for over two years was happening. Hot Bod's grand opening was today and my stomach was all tied up in nervous knots. I had no idea why. As soon as the press heard about this idea, we'd gotten so much support from the community, and instantly signed up memberships even before the building was finished. I hired the best of the best in every field--hairdressers, personal trainers, aerobic instructors, tattoo artists, masseurs, etc. 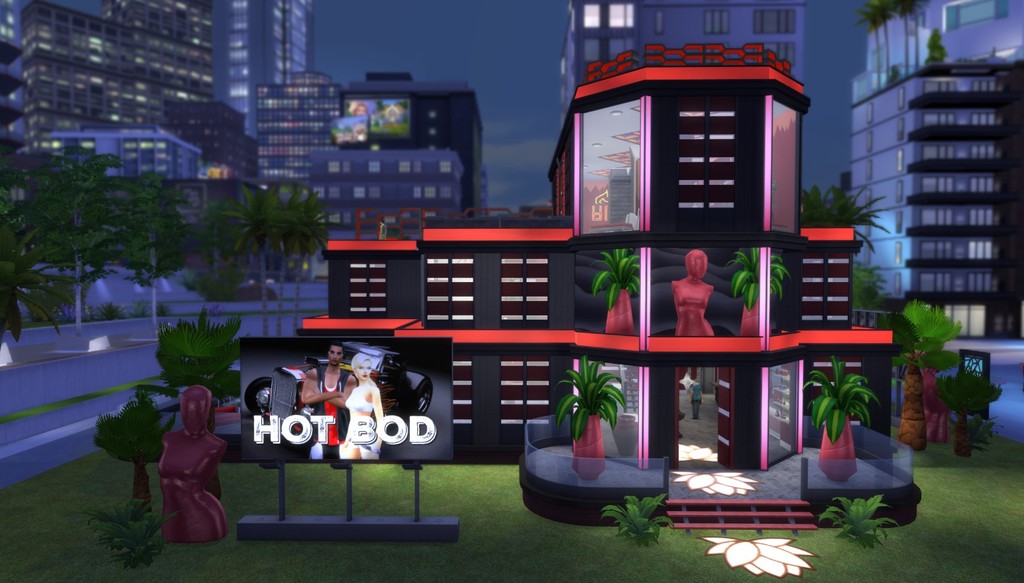 And the building itself was even more beautiful than Theo and I had first imagined.

All was going according to plan.

Today, I was meeting with my managers of each station to make sure they knew how to handle the press. Under no condition were they to talk about me or my family in any way. If they were questioned inappropriately, they were to terminate the interview. I always found journalists to be oportunists to find out a juicy piece of gossip about me or the people in my life. They couldn't wait to unearth some sort of skeleton about Jackson Day's "troubled daughter".

"I really don't think you have anything to worry about, Ms. Day," Treyvon, my gym manager assured me. "We got your back."

"I don't know, Trey," the manager of the tattoo artists, Journey Mitchell, said. "I found a pap trying to take pictures of my area. I had to shoo him out."

"Yeah, but we got a list of the journalists names, don't we?" Treyvon countered. "They should know better." 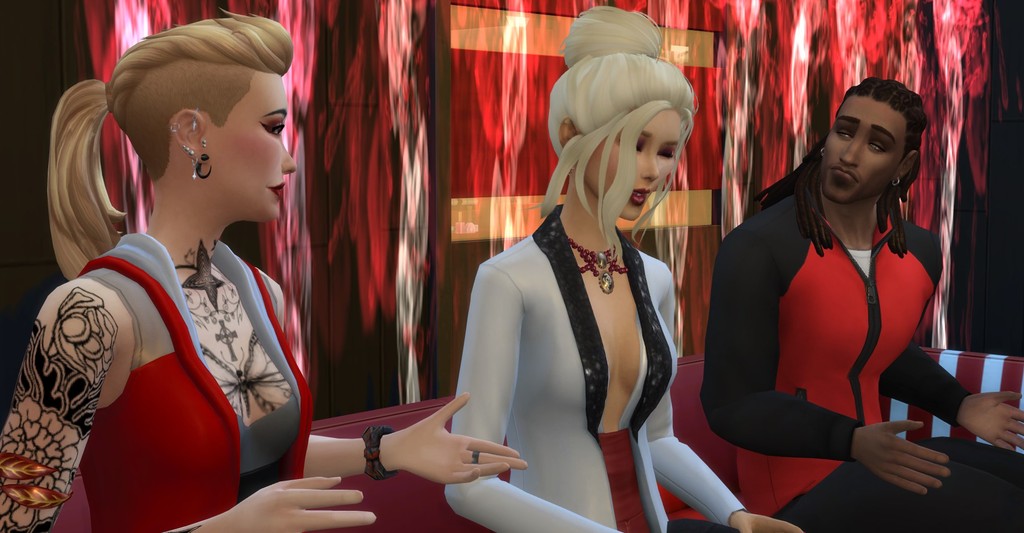 "Just let them try to take pictures of my area. I've got a hot iron waiting for them," Claudette Laurent, my hair salon manager said with a smirk.
​ 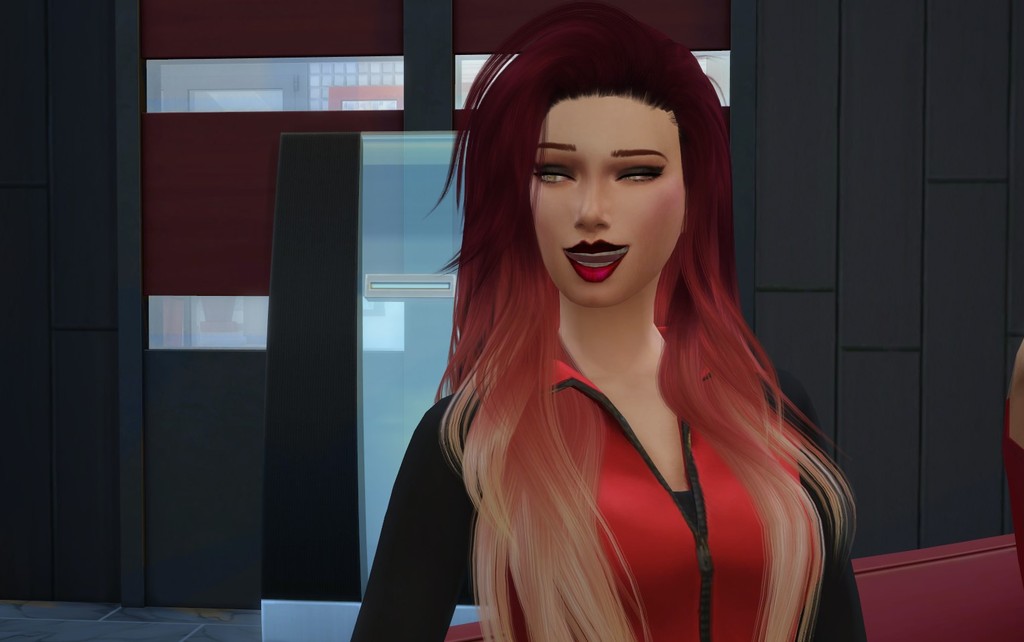 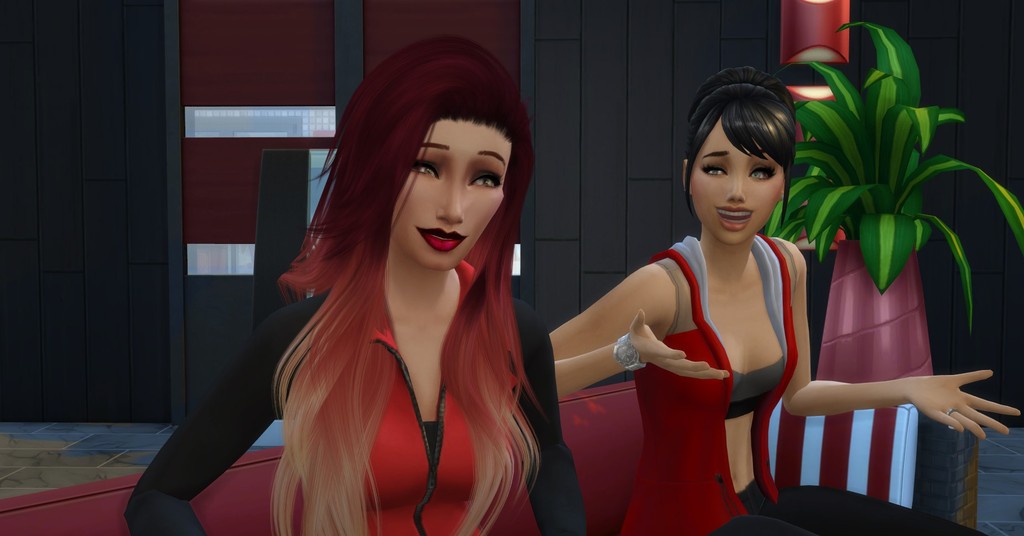 "I appreciate all your boldness," I said, amused, "but if you see paparazzi, just call the police. I don't need bad press against my staff. Is that clear?" 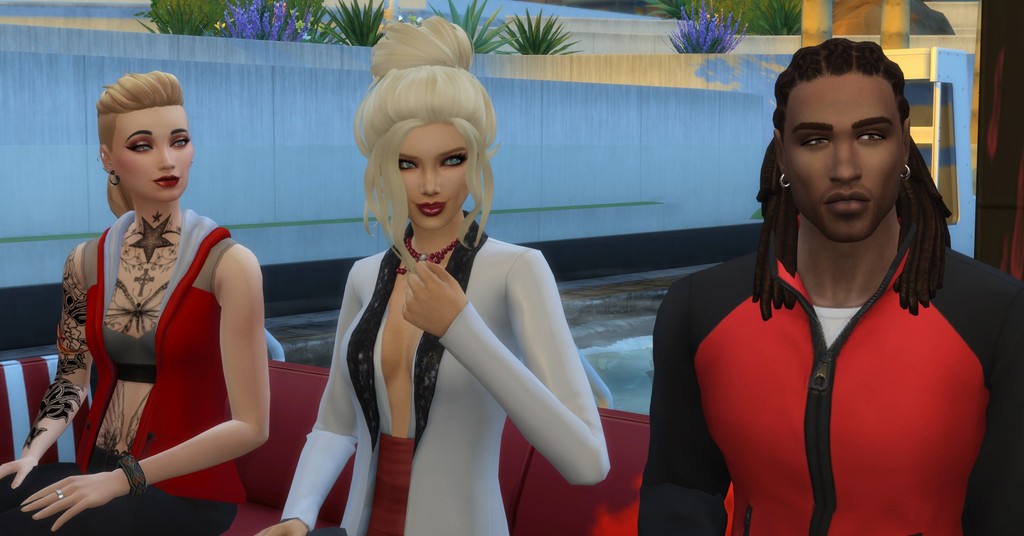 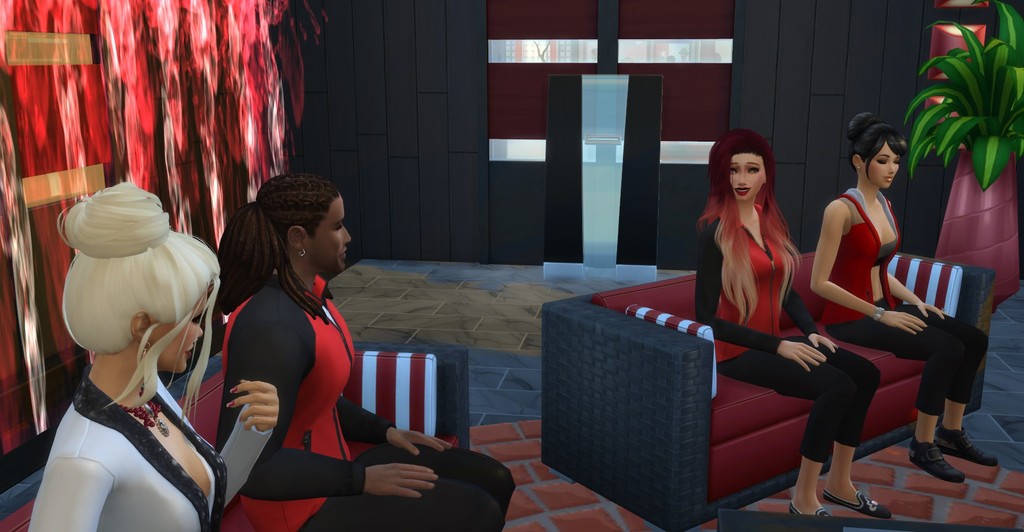 The grand opening. I smiled broadly at how fine the place looked. And it was all birthed a few years ago in a senior level business class. Who would have guessed? People were streaming in and out the doors already, and we'd met our membership quota months ago. This was really taking off. 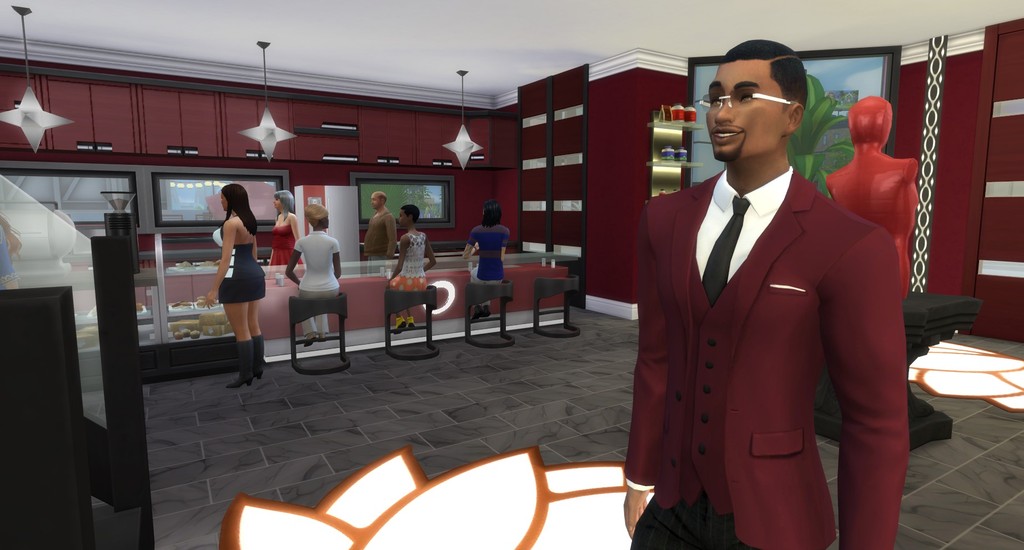 I saw my girl come toward me. She wasn't going to like what I was about to say, but I couldn't help it. Being the lowest lawyer on staff at a major law firm meant I had no time for anything else. She was sick of how it seemed as if my bosses took advantage of my work ethic, but hopefully, she'd understand.
​ 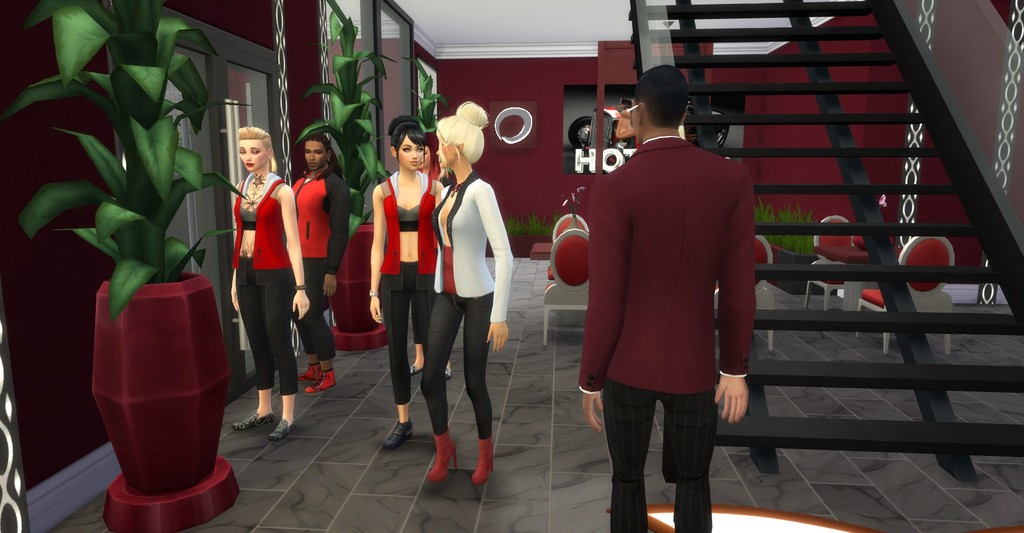 Giving her a kiss on the cheek, I said, "Hey, can I talk to you alone?"

Pulling her aside behind the counter, I said, "Jensen ordered me to attend the meeting today. It's for one of our biggest clients. A merger. You know I can't tell my boss no. I'm sorry, baby. I really wanted to be here."
​ 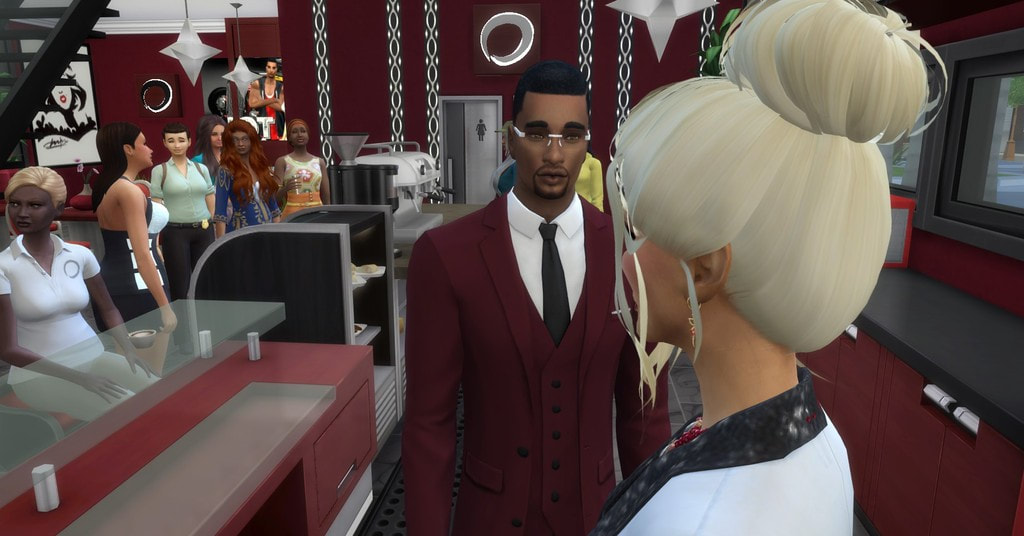 "You always say that. I thought you asked off for this months ago. Why can't you stand up for yourself?"

God. She just didn't get it. If I paid my dues now, then I could set my schedule later. I couldn't do that in the future if I didn't work my ass off now. But telling her that would just bring on a huge fight that I didn't want to deal with.
​ 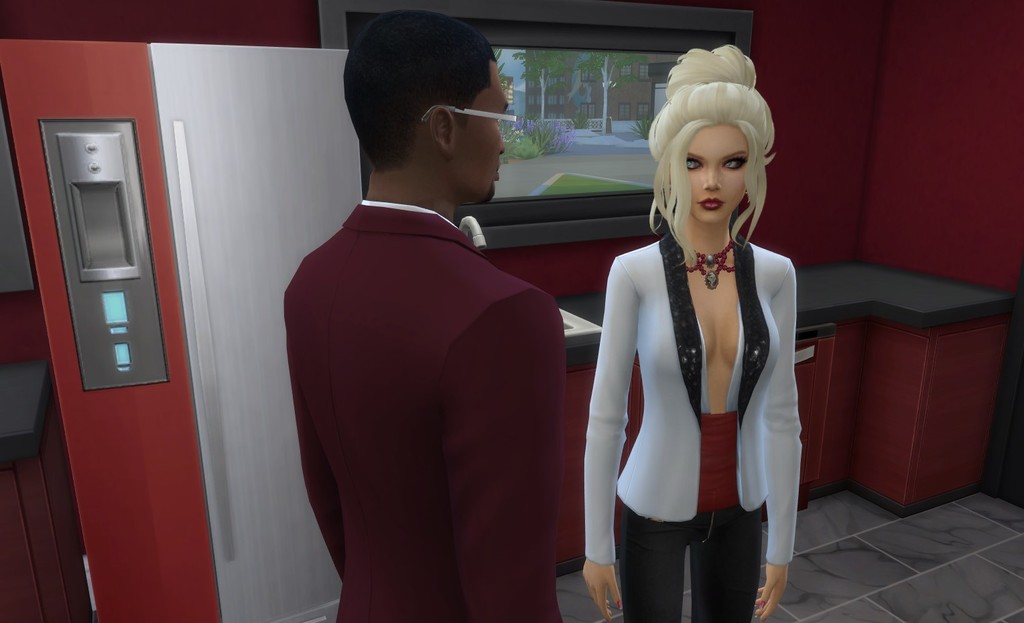 "I'll make it up to you," I said, not knowing what else to do. I was in deep shit with her. Work had been piling it on lately. And missing the grand opening sucked. I hated my job sometimes.

Then I noticed dark circles hanging under her eyes. "Are you okay? You ate today, didn't you?"

Shaking her head, she said, "I haven't had time. I'll get something later and with you gone, I have to put out all the fires by myself."

That stung. I knew I shouldn't leave her with all this pressure by herself. Especially with the interviews of the press today. "Make sure you eat. You've lost a ton of weight. That couldn't be good for you." 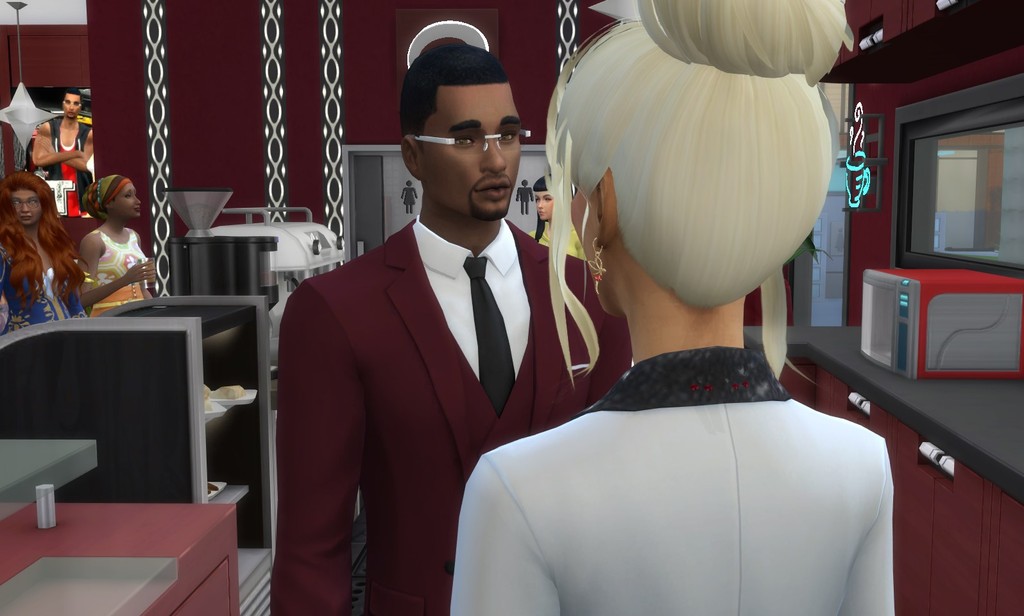 "Let me worry about that. It's not like you care all that much."

This angered me. She knew she was the most important person in the world to me. "That's not fair."

"Leaving me on our grand opening isn't fair."
​ 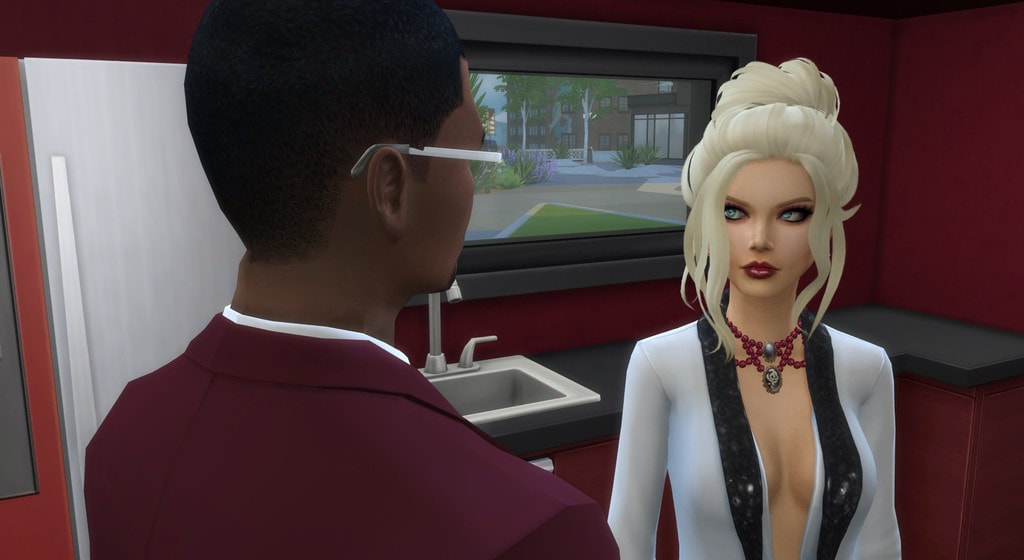 "So that's how it's going to be. You're not going to be understanding. It's not like I wanted this, you know. If I could change it, I would."

She didn't respond. I could tell she was fuming. 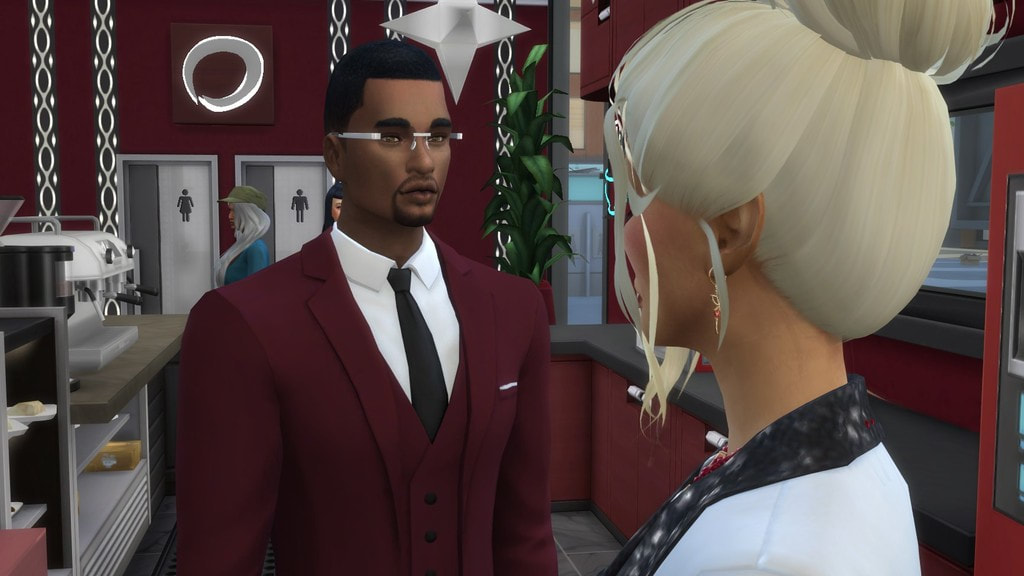 I left her there so angry she wouldn't speak. I could only hope she'd cool off by the weekend. I had a special night planned for us on Saturday.

Walking toward the doors, I spotted Gabrielle Cason, one of Cam's wife's friends. I got her the job as head masseurs. I'd heard great things about her massages although I was too busy to get one, and I doubted Siobhan would have appreciated a beautiful woman massaging my body anyway. "What's up, Gabby? Are you all ready for the opening?"
​ 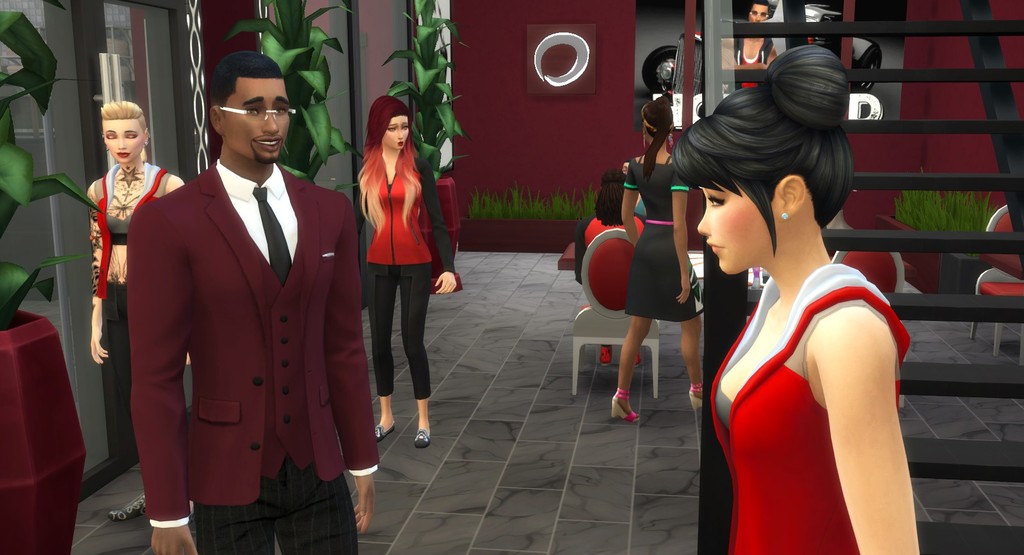 "As ready as I'll ever be, Theo." She fluttered her eyelashes at me. If I didn't know better, I'd say she was flirting. But that's  how she was. Just a nice girl with a sweet smile.
​ 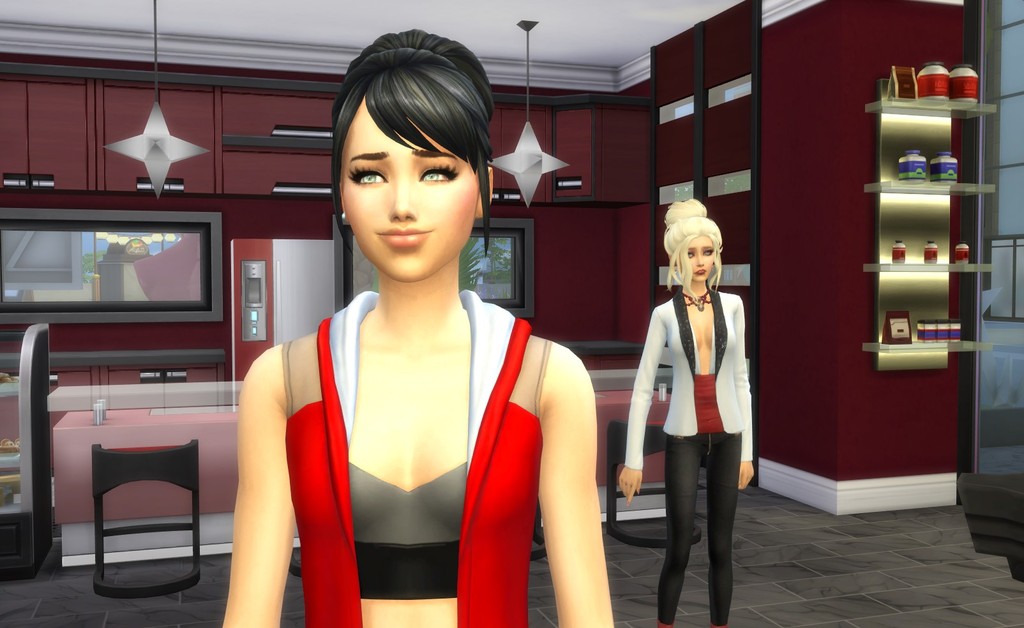 I knew there were going to be hiccups today. There always were with a business I'd found, but I wouldn't have guessed Theo wouldn't be here. Never. Was this how my mother felt when my father left on tour? I now held more sympathy for her with each passing day in my relationship with Theo. It seemed to me that he put work first, me and everything else second. He was driven to a fault. Now I understood how resentment could build when you're forced to take a backseat to their first love: work.

And to top it off, on Theo's way out, he found a bit of time to laugh with one of our staff. The prettiest one, too. 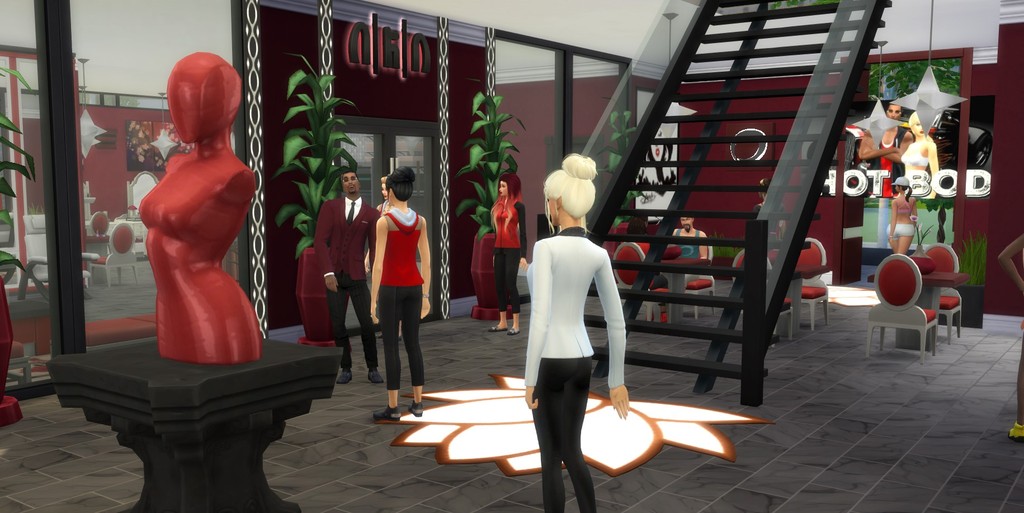 I didn't like how ugly I felt at that moment. I didn't want to turn into my mother.

But I was upset and the gloominess that tried to swallow me whole was hovering, waiting with an open maw.
​ 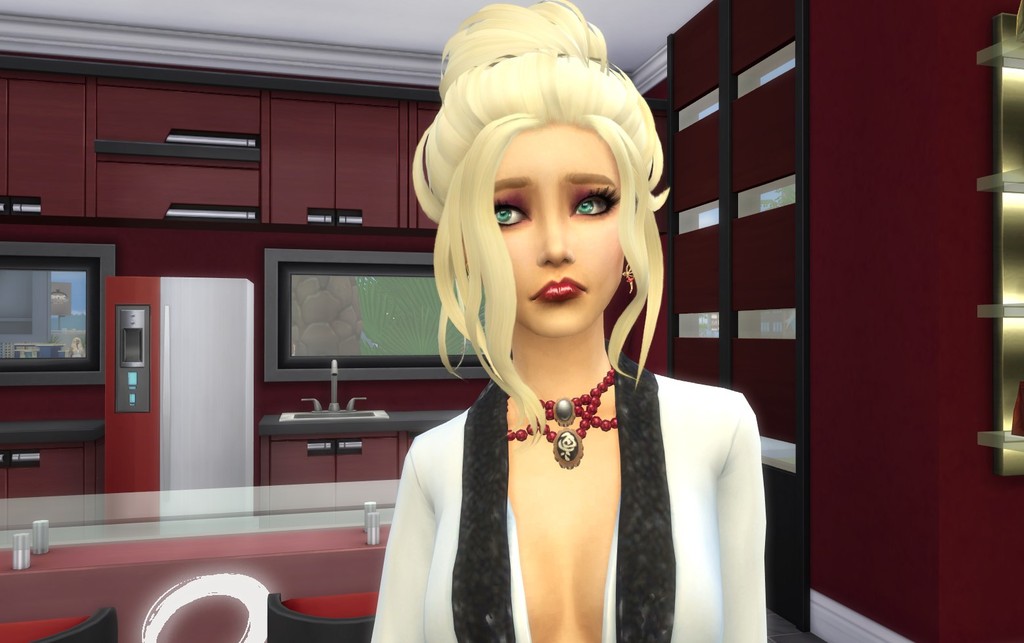 Anyone could witness that our bosses were fighting. I'd barely seen Theo Wolff, the business partner and boyfriend of Siobhan Day. He was an upwardly mobile lawyer at a huge law firm. Success oozed from his Italian suit to his alligator shoes. But if he didn't watch it, someone else was going to steal his pretty blonde away from him. And I wouldn't mind if that someone was me.

She deserved better than the cold fries he left for her all the time. She looked on the verge of tears as she watched Wolff play around with Gabby.

It was time for me to help her out.

"Ms. Day, could I have you take a look at one of the climbing walls upstairs? It's stuttering again." 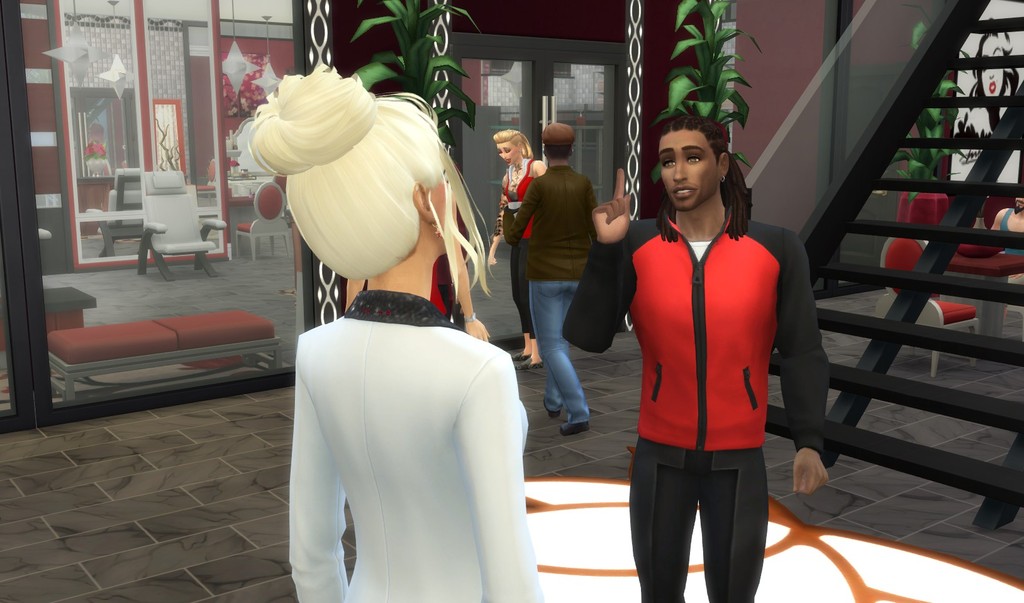 She winced. "Not again. I'm beginning to loathe that I ever put those monsters in. We've had nothing but trouble ever since they were installed."
​ 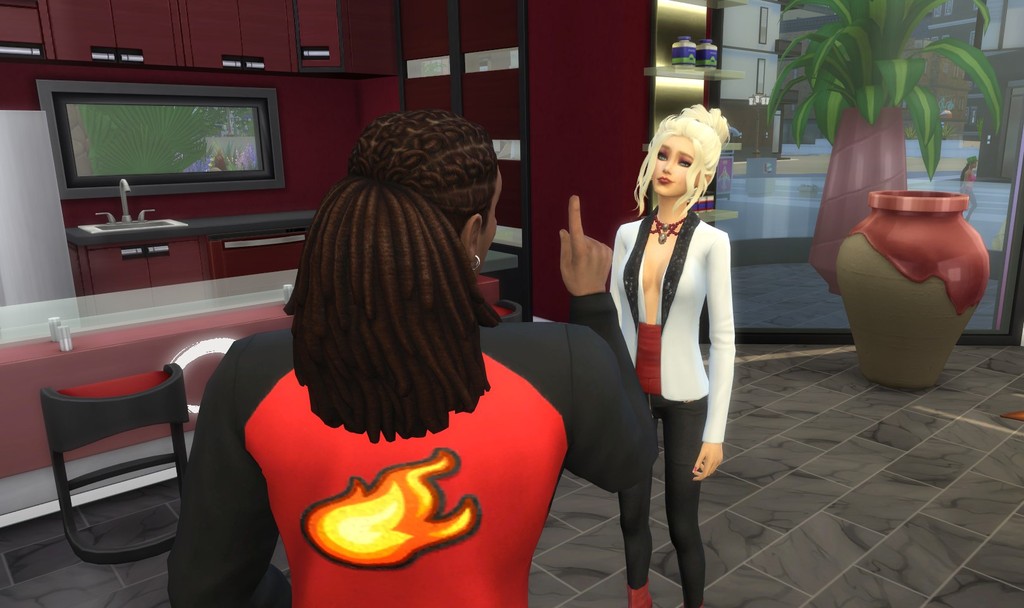 "Hey, now, I think they're a great idea. All we might need to do is have it replaced. It is under warranty. I could just put up an out of order sign for you."
​ 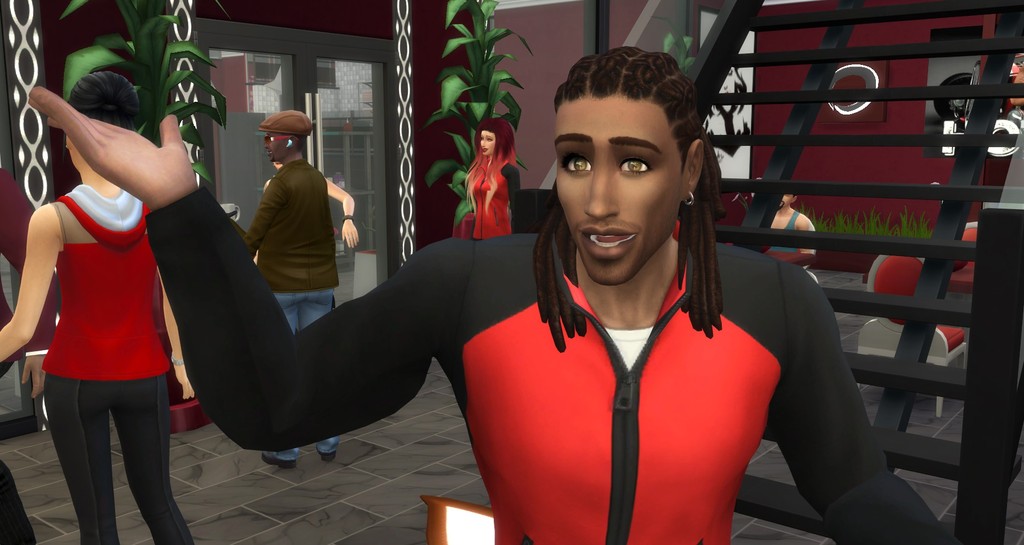 "No...I'll look at it. Thanks, Treyvon." She sighed then watched as Wolff left through the front door without so much as a glance back at her. 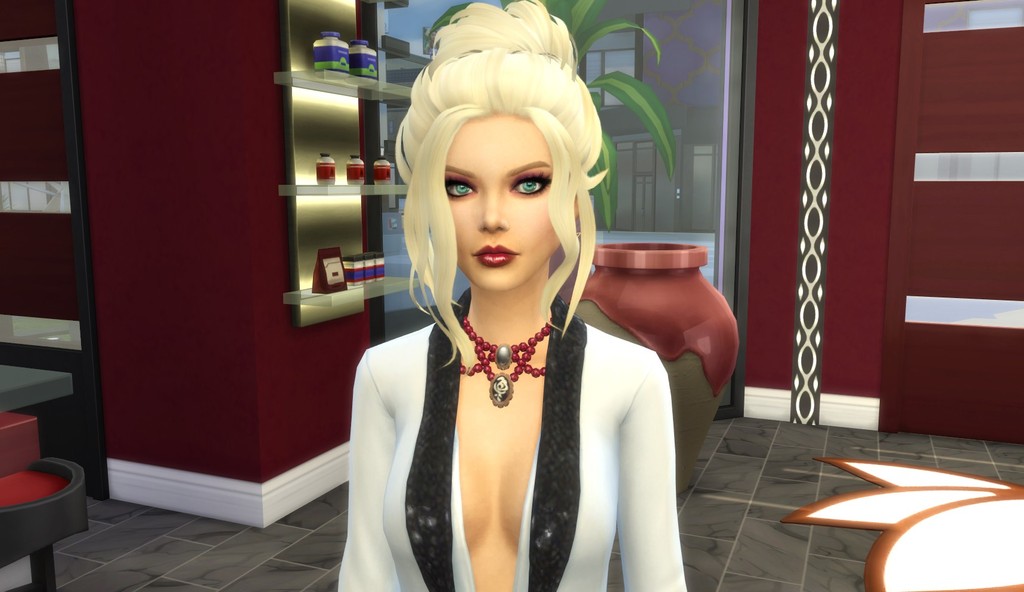 "Want me to get you a coffee or something?" I asked. "You look a little pale, if you don't mind me saying." 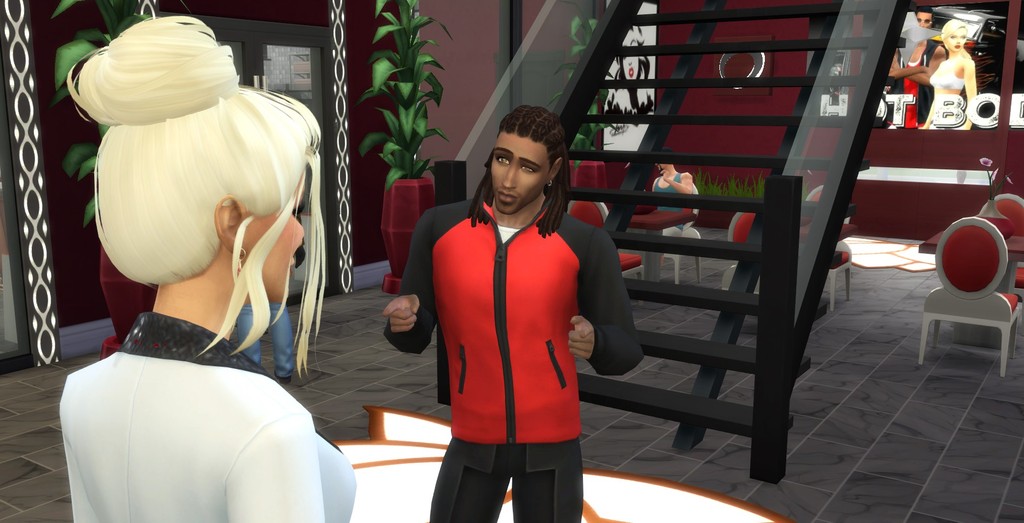 Putting a hand to her head, she said, "I-I'm not feeling so hot. Maybe a coffee would do me good. I'll have a look at that climbing wall. You can bring it up there. Thank you." She tried to smile but it ended up looking pained. I felt so bad for her. She needed a nap, it seemed.

But when I went upstairs, I found her collasped on the floor!

But she was unmoving.
​ 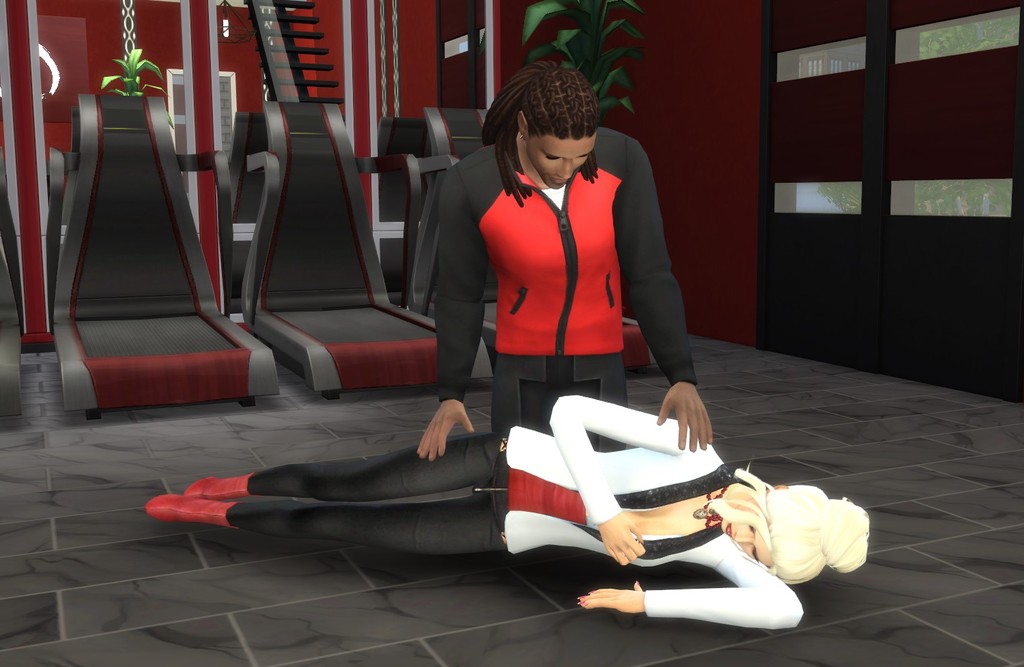 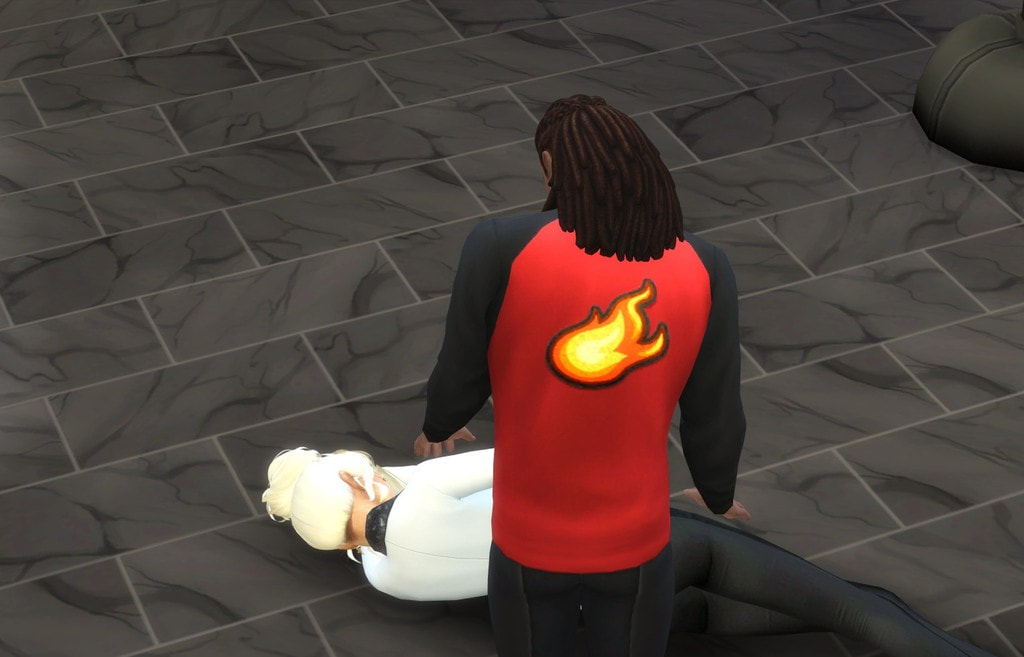 Wanted to thank the talented RABOOSKI for making this spa/salon/gym/coffee shop. So awesome and gorgeous. If you want to play in it, go here: HOT BOD GYM