Through the window of my office, Paxton and I were witnessing the dressing down of the most hated doctor at SM General, Dr. Tiara Angelista. Well, most hated, in my opinion, by the other doctors and staff. She was the sole reason I wasn't allowed to move into the head children's position in the first place. I watched as Dr. Benton Landis, Jackson's uncle, gave it to her in the middle of the hallway. Not very smart to get on the bad side of the Medical Director. 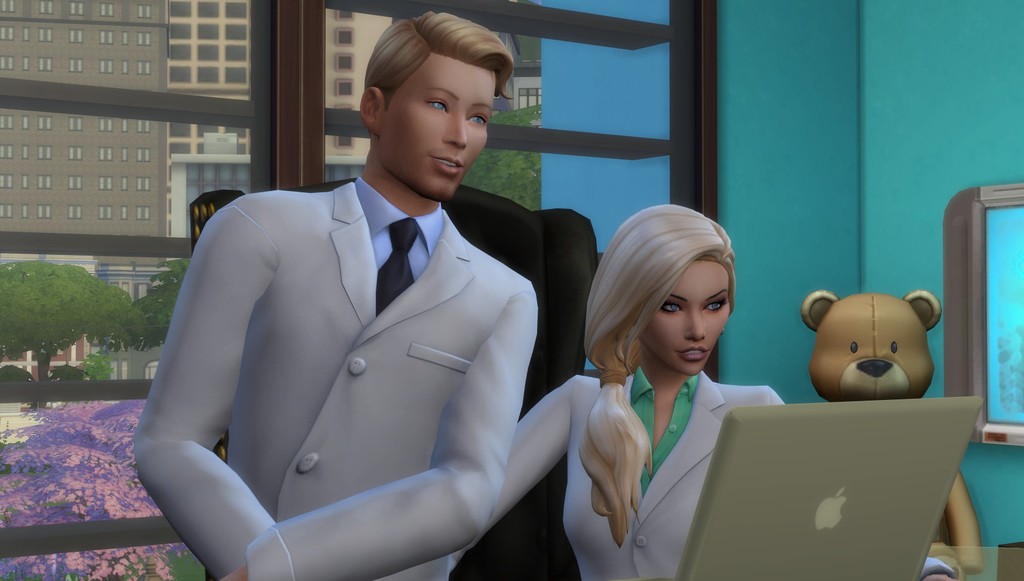 Paxton smirked. "She deserved it."

I heard a note of pride in his voice. "You didn't have anything to do with this, did you, Pax?" I asked.

"I may have mentioned while telling him how she blocked you that she also joked with a nurse that a patient was about to be discharged up." A smile slithered over his face. "In front of the patient's family."

I gasped. "She did that?" A patient who was about to be discharged up was about to die. The woman was an unethical bitch.

I shook my head, getting back to my paperwork online. "Geeze. Remind me never to get on your bad side."

"You don't have to worry about that. You're my best friend's wife...Speaking of which. How is Jackson?"
​ 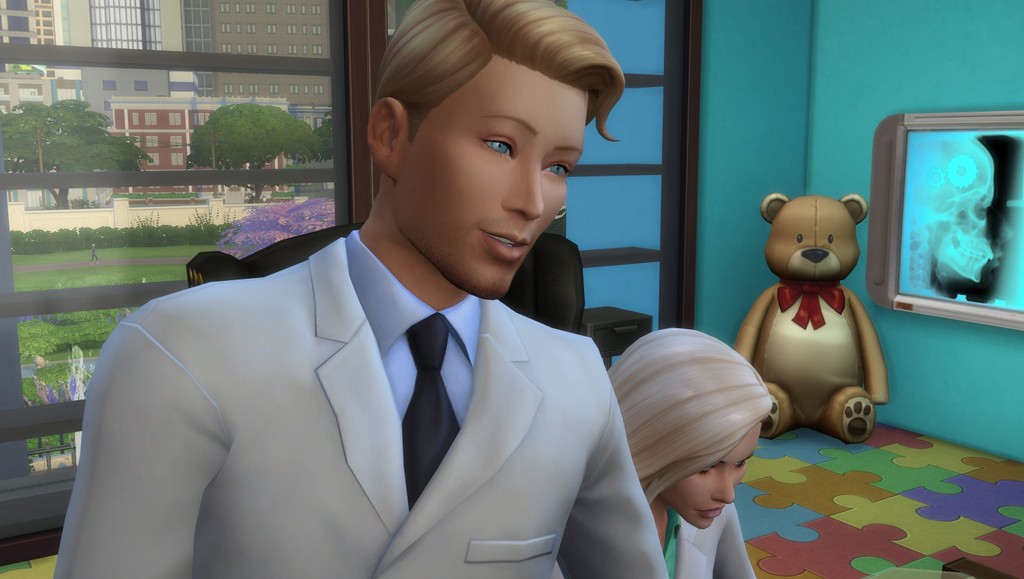 ​I shrugged. Jackson was on a breakneck tour and told me he'd be out of pocket mostly. I hadn't spoken to him in five days, but he was supposed to call me tonight. "Same, I guess. Loved by the world." I could almost hear the raucous applause and cheers by thousands of his fans that filled stadiums night after night.

Pax looked at what I was working on and pointed. "You really should allow the admin to do that. Budget stuff is his forte. You just need to concentrate on goals and maybe hiring some new staff for the department. That's what he'll want to hear about at our meeting."

I sighed. Who would have guessed being a department head would be more work, not less? I was getting home later and later with all the duties and meetings I had to fulfill. Plus, I still had a full patient workload. The only benefit was a raise and I didn't have to be on call. We didn't need the money, so not being on call, I guess was worth it. I wasn't sure yet.
​ 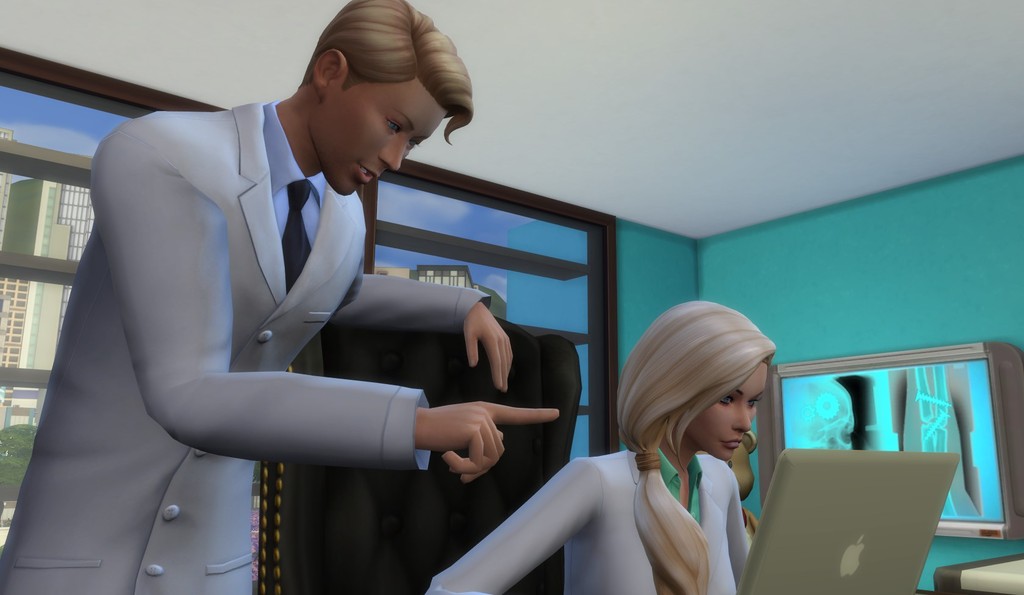 Pax seemed to sense my frustration. "Want to break for lunch? There's a cool brewery down the street I'm dying to check out."

Sinking back into my chair, I said, "I'd adore a beer at the moment, but I have to make my rounds in a few hours."

Eyebrow lifting, he asked, "How about we make it root beer then?"

I laughed. "You've convinced me." I shut my laptop and all that work waiting for me, took off my lab coat, and pulled him with me. I couldn't wait to get out of that office.

When I saw the brewery, I'd recognized it. Jackson and I had talked about going here. It was fairly new and contained a lot of different craft brew. I was a bit disappointed I couldn't try anything alcoholic, but the ambiance looked fun. "Come on, Pax. What's the hold up?" I teased. He walked as slow as Jackson only Jackson had an excuse since his accident made it hard for him to walk fast. 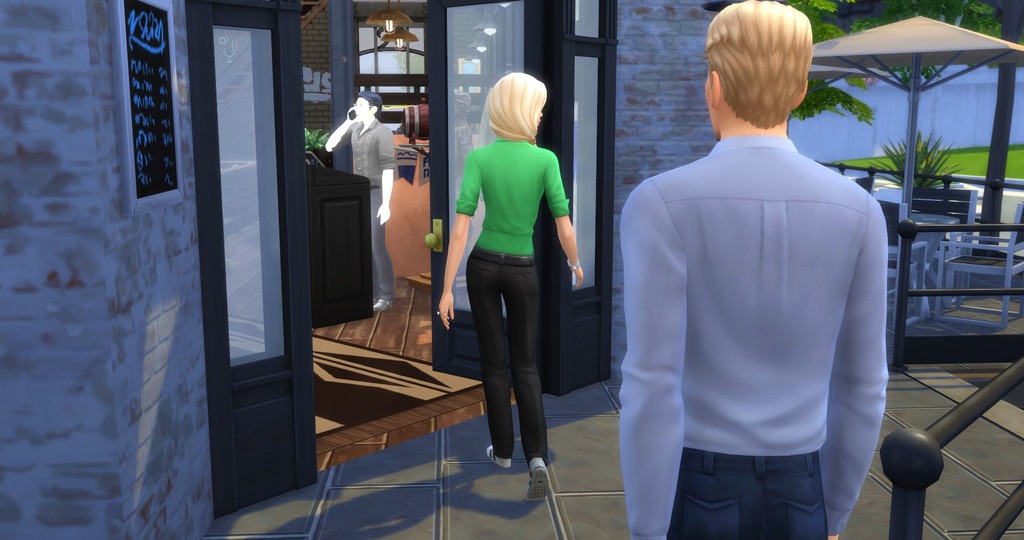 Once we entered, I asked, "You want to sit outside since it's a lovely day? I agree. It's too beautiful to be trapped in a bar."

He grinned in agreement.
​ 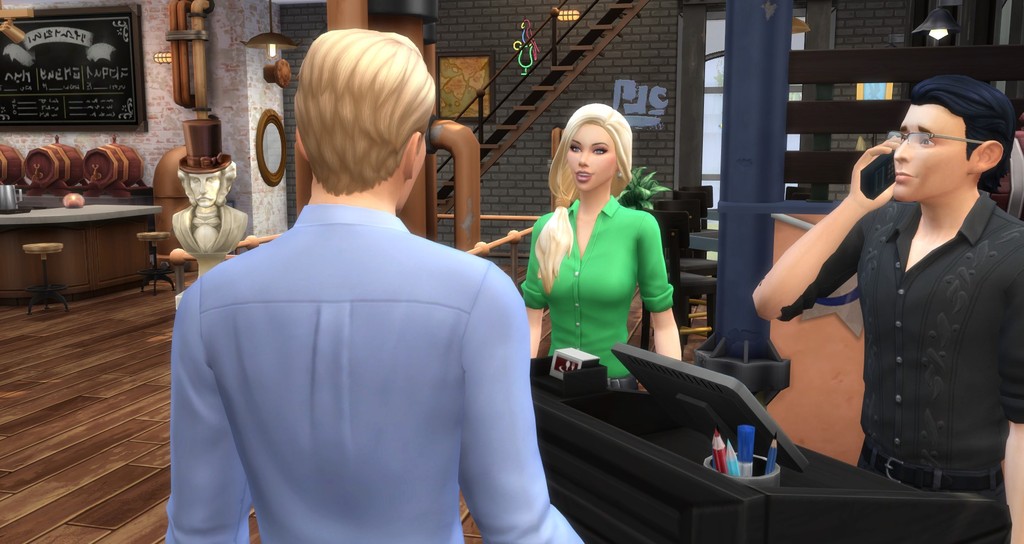 We settled into our seats and I breathed in the sweet spring air. There was nothing like San Myshuno in April. People always criticized it as being a concrete jungle, but the shops and restaurants tried to plant an array of flowers and trees blooming everywhere. I loved to gaze at the skyscrapers. It was home to me now. Better than Newcrest.

Starving, I ordered for both of us--roast chicken with vegetables and a rootbeer float. I'd have to run a few more miles on the treadmill tonight in payment, but it was worth it. After having two kids, the pounds seemed to cling like barnacles on a whale. I refused to let them. 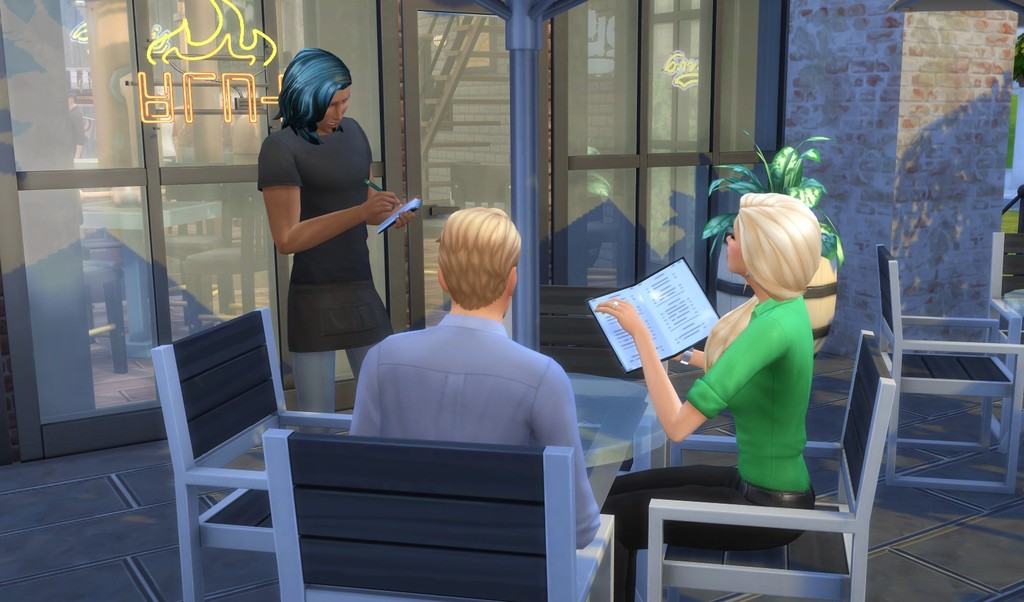 Silence settled on us, and I noticed Paxton gazing at me. "What?" I asked. "Do I have something stuck on my face?"

He smiled. "No...it's just...you seem to have everything together. Well adjusted kids, a happy husband, and you're killing it in our job. What's your secret?" 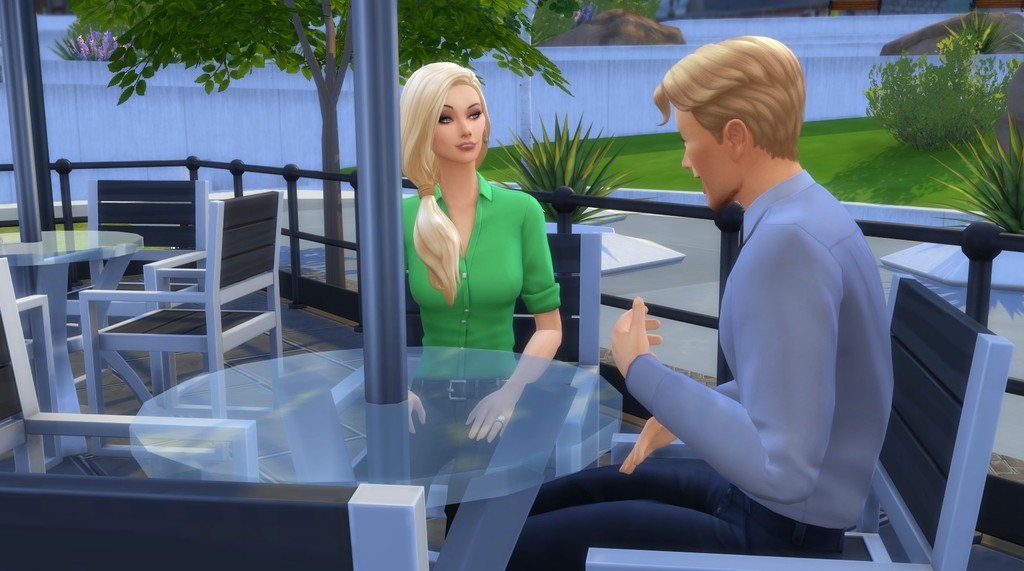 This was out of the blue. Did he not have all those things? Luci never mentioned any trouble at home. But then Luci always seemed to have a smile on her face even when it was pouring rain outside. It was just the way she was made. Maybe she hid some deep dark secrets. I knew their daughter, Crystal, was a beast in children's clothing. My poor, sweet Siobhan was so patient with her. But the girl probably had issues with narcissistic personality disorder among other things.

Cocking my head, I asked, "Is...everything all right at home, Paxton?"

Hesitating, he finally sighed loudly, like a pressure cooker hissing. "I'm not going to lie. It's been rough for us these past few years. Crystal is a handful and I see things in her that aren't right, but Luci refuses to get her tested. This leads to us fighting. A lot. Plus, you know she's pregnant, and she hates it. And somehow, I feel like she hates me, too. Like I did this to her." 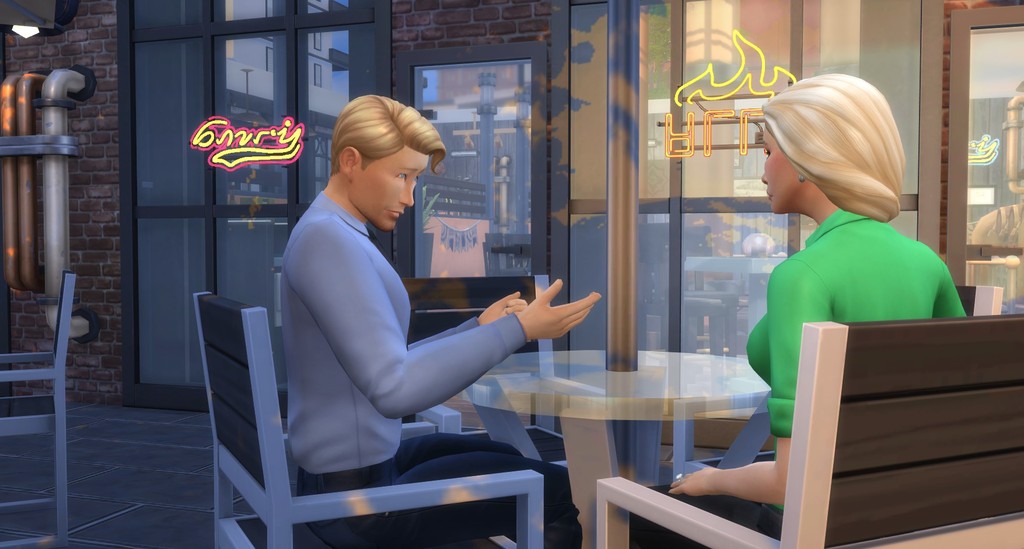 My heart ached for him. Luci never hinted that she was anything but contented. But come to think of it, she didn't talk about Paxton. It was always about what news feature she was working on or the normal issues she was having with the kids. But nothing about her marriage. It was strange now that I thought about it. I'd always said good things about Jackson. I was so happy with him. He was the best husband, even if I didn't really like him being away so much.

But what could I say to Paxton about this? I decided to commiserate. Didn't all marriages hit rocks sometimes? "You know, Paxton, everything isn't always cupcakes and butterflies with Jackson and I. That's just the normal way of life."

"They aren't? You could have fooled me. Jackson is always so happy. He doesn't mention trouble."

"Well, Luci never tells me about yours."

Just then the food arrived. 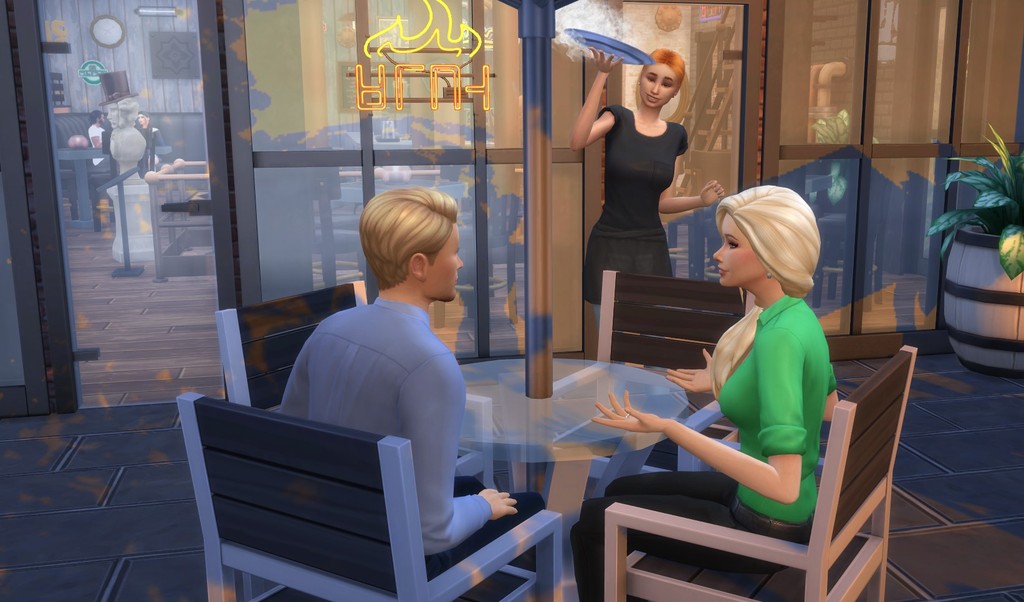 I went on, "Look, all I'm saying is don't make mountains out of molehills here. A pregnant woman is an emotional creature. Believe me. Sometimes, Jackson would want sex, and I didn't even want him to touch me because I was so sick."

He winced. "Really? That does sound like my wife. We haven't done it since she found out."
​ 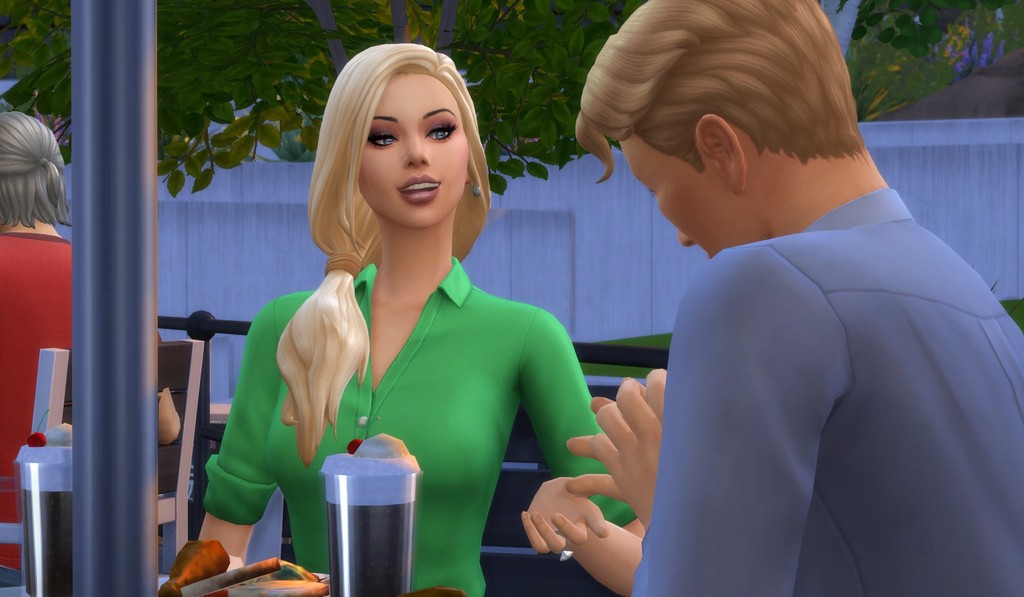 Wow. Well, I would never want to do that even when I was pregnant. It would only happen sometimes. There was something wrong. "Are you sure you're giving her enough attention? Like do you cuddle and tell her how beautiful she is?" Jackson always made me feel special. I missed him so much.

Picking up his drink, he said, "She doesn't want me to touch her. Says she's not in the mood. She thinks if I want to get close to her, it will lead to sex. So, basically, when I get home, I make sure the kids are fed, have gotten baths and I tuck them into bed. Once that's finished, I go to my study. If she wants to be left alone, who am I to make her uncomfortable?"
​ 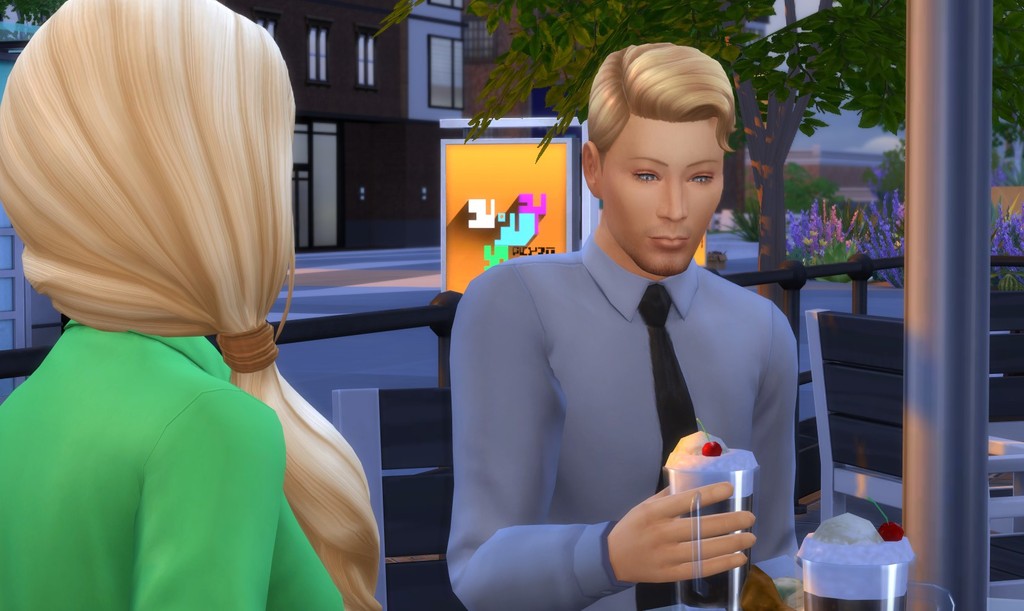 God. Their marriage was worse than I'd ever expected. I wondered what Luci thought? But she sounded like she was treating him horribly! No wife should ever say she doesn't want to be with him. And who was she kidding in not taking Crystal to get testing? Any moron could see the poor girl did not function properly. But many parents were in denial about their children. I saw that first hand in my practice. That was how come most disorders weren't diagnosed until much later in life.

Paxton was a doctor. Why wouldn't Luci listen to her husband? This infuriated me.

It was time I took my former minion on. She couldn't get away with treating her husband like this.

"Do you want me to talk to her for you, Pax? Maybe there's something she's not sharing with you. Sounds like you need counseling."
​ 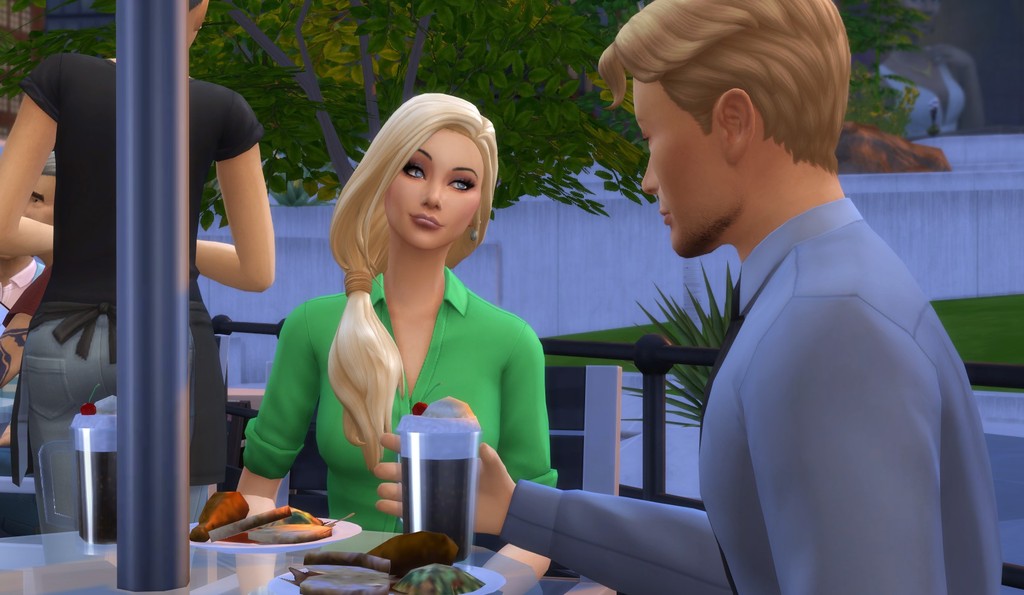 He shook his head. "She won't go to counseling. I've already broached the subject. She thinks I'll make her out to be the bad guy since I'm a doctor."

I bit my lip. The Luci he talked about seemed like a totally different person from the one I knew. I was determined to get to the bottom of it.
Powered by