I didn’t know how long I’d stayed there, reeling from the drugs and the images that haunted me.
​ 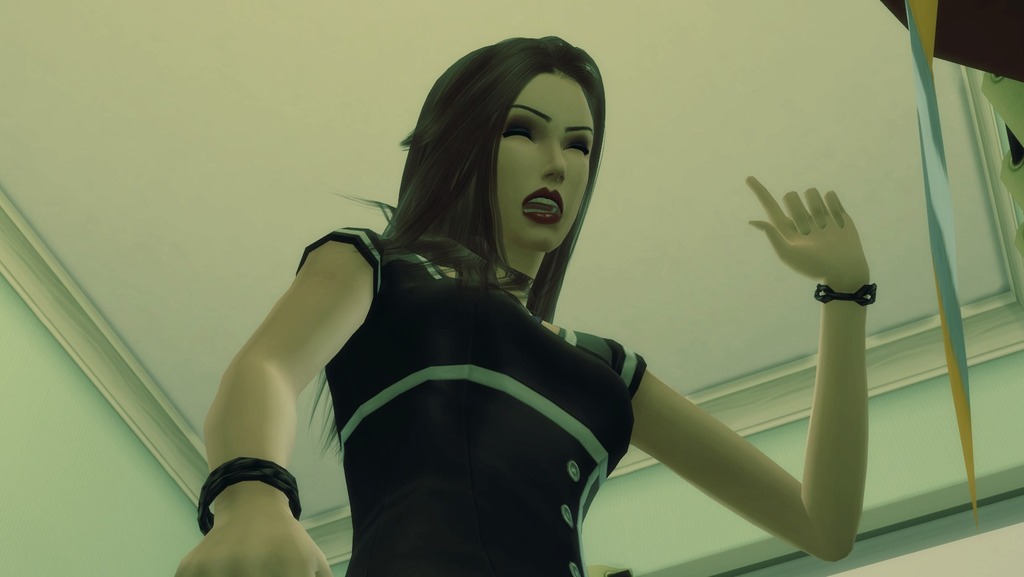 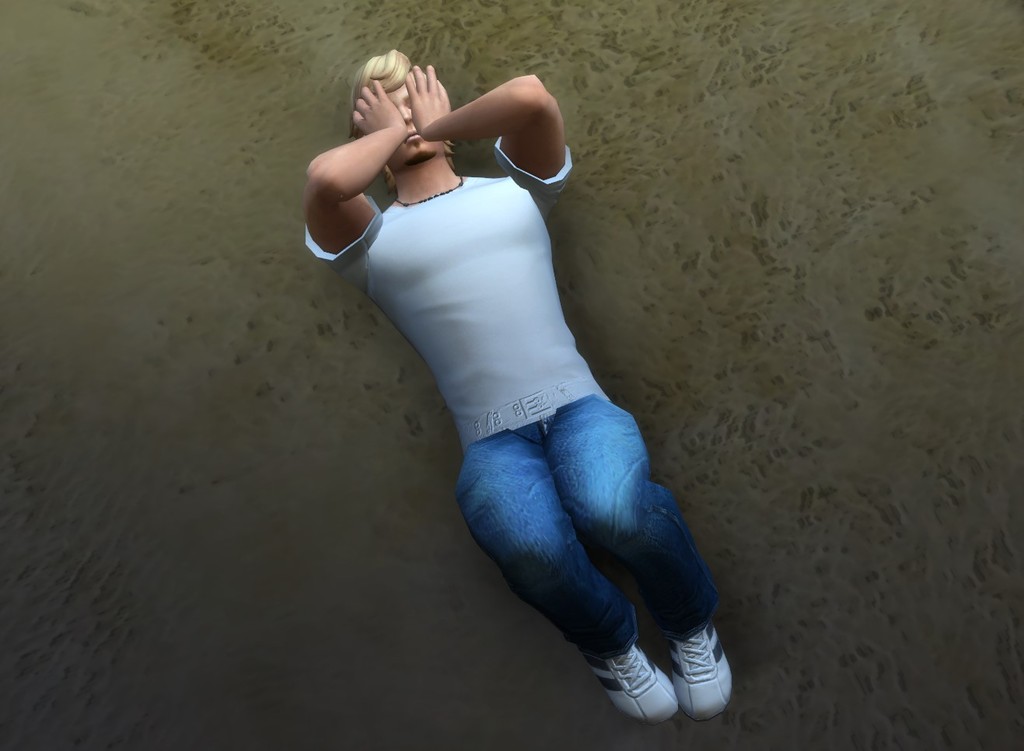 But then he cursed and ran up the stairs.

Trying to shake off the dizziness, I sluggishly pulled out my tools, trying to focus. But it was so fucking hard. Everything seemed to move on its own. I was so disoriented.

Awkwardly, I used the pick and easily unlocked the door.

Finding a knife by pulling out drawers, I sped up the steps, into the darkness.

But all was hazy. I couldn’t see very well. It was as if the air was shrouded in mist.

And then I saw her.

My mother. She was here. She’d found me.

“No!” I shouted, lunging at her with my knife. I wasn’t going to let her ruin things. Take everything away from me now that I finally figured out who I was inside. She would never abuse me again. Gritting my teeth, I hissed, “You’re never going to hurt anyone ever again!”
​ 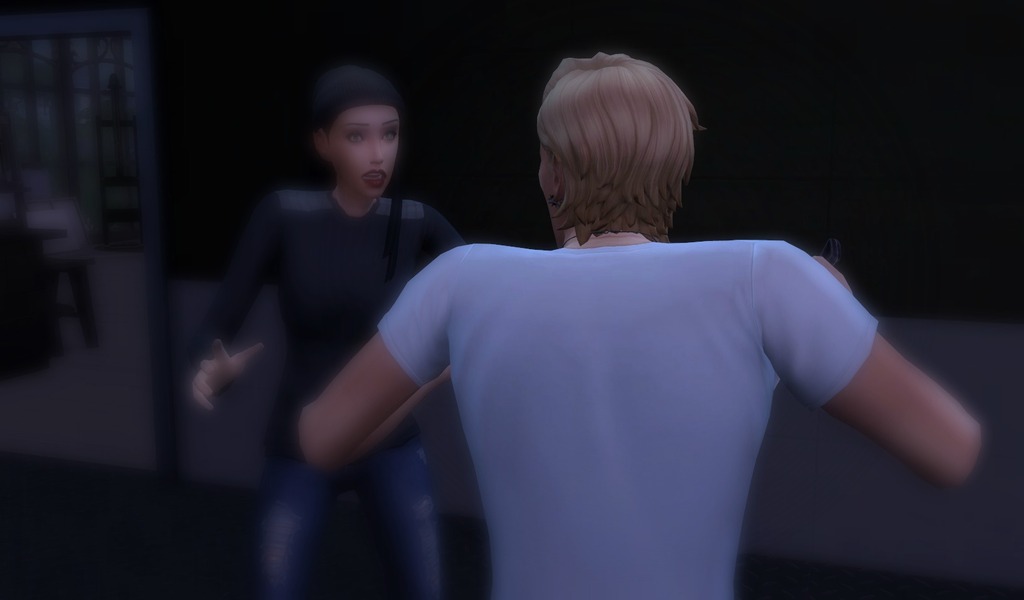 Taking her to the ground, I couldn’t help but feel my hand tighten around her neck. I didn’t know if it was the drugs or just plain fury bursting from me, but I was going to do it. I was going to kill her.
​ 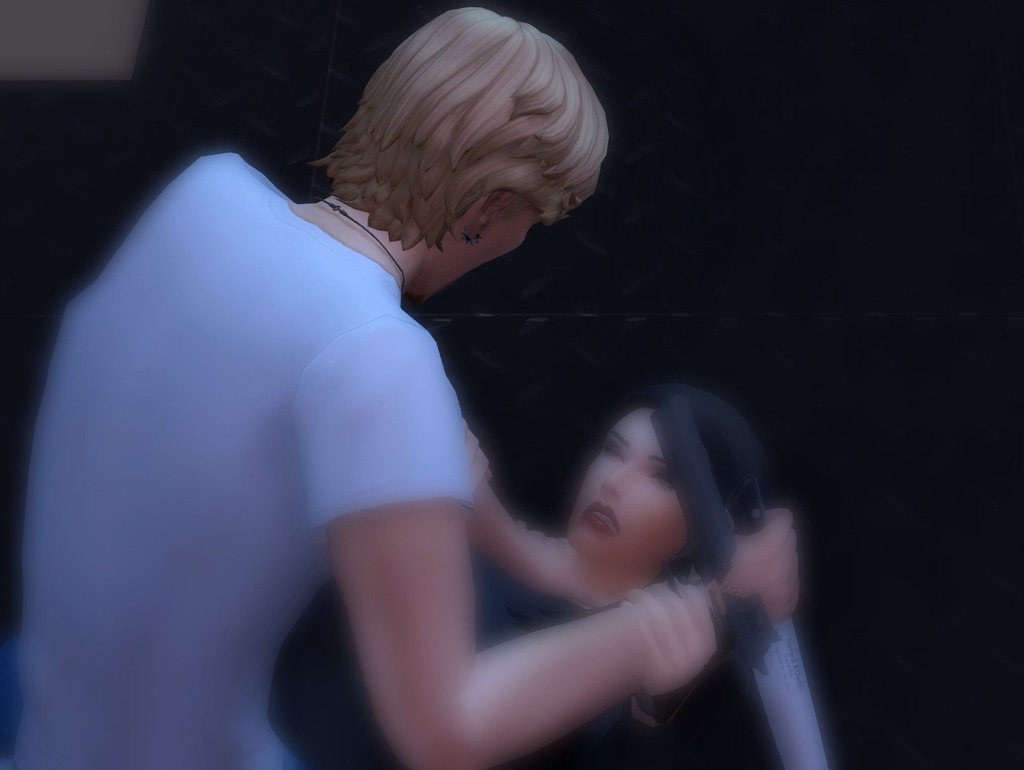 When we got to that fucking bastard’s house, I kicked open the door and shot him twice. He crumpled as I jumped over him to find Alex. Oh, God, I prayed he was alive.

In the darkness, I saw Alex and rushed to him, but his eyes held a mania I’d never seen before.
​ 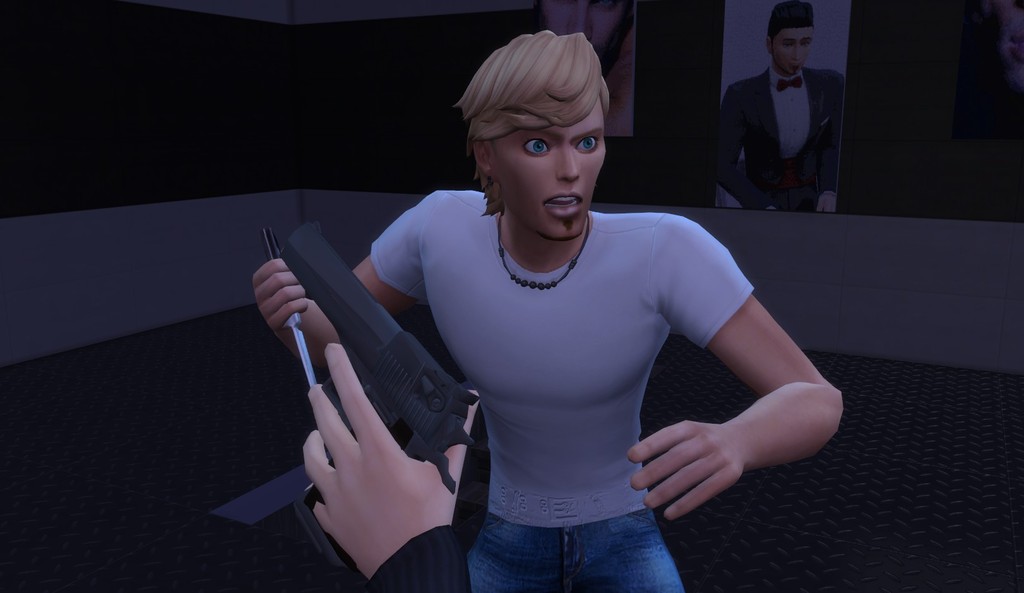 He charged at me with a knife, mumbling something, taking me to the floor.

As he tightened his fingers around my neck, I gasped, “No, Alex, don’t!”

Raising a knife, I blocked it before it could plunge into my face. “Alex! It’s me! It’s Knight!”
​ 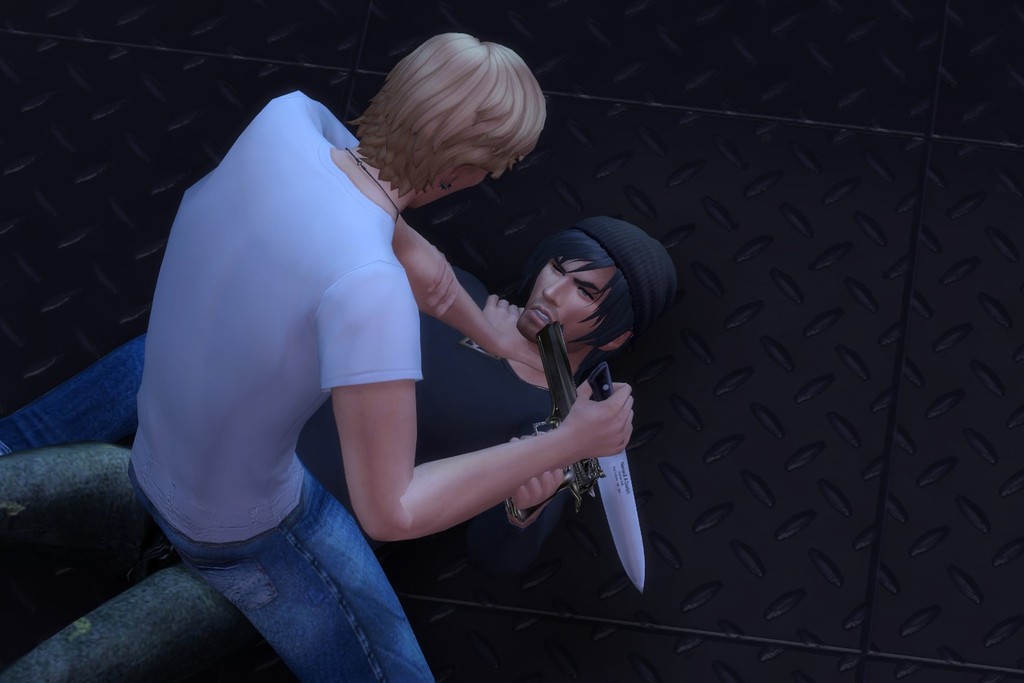 I took another breath, all the blood rushing out of my body. “Alex! STOP! I’m Knight! KNIGHT!”

Suddenly, he relaxed, cocking his head in confusion. “Knight?” he whispered. It was as if a veil had been lifted from his eyes. “Oh, God!”
​ 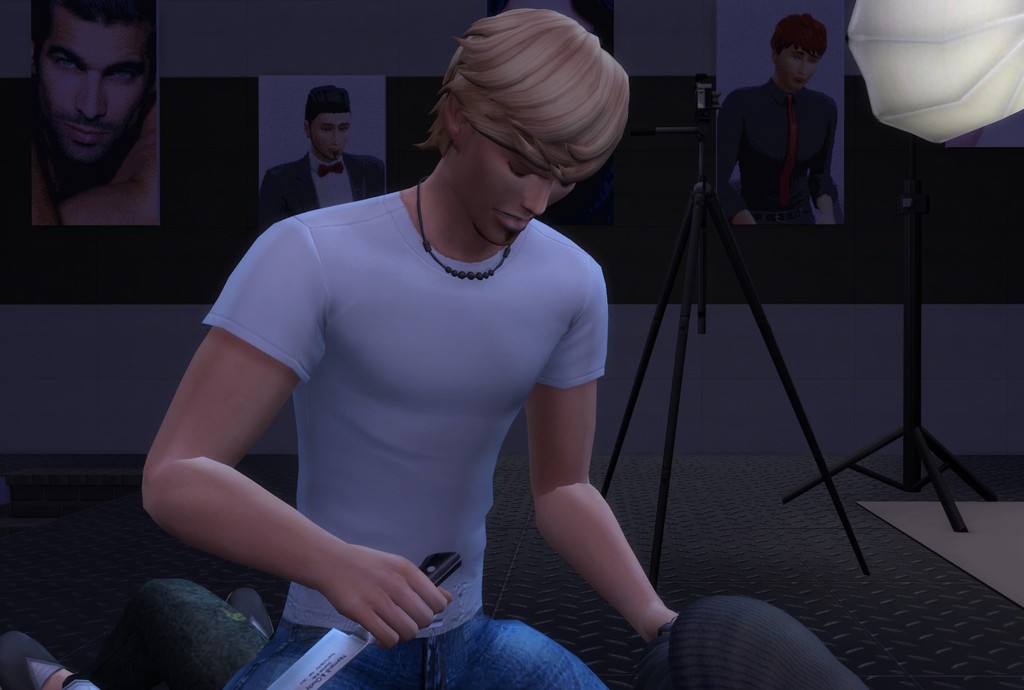 I didn’t know what to do. My whole body shivered from seeing Alex try to kill me. I was in shock
​ 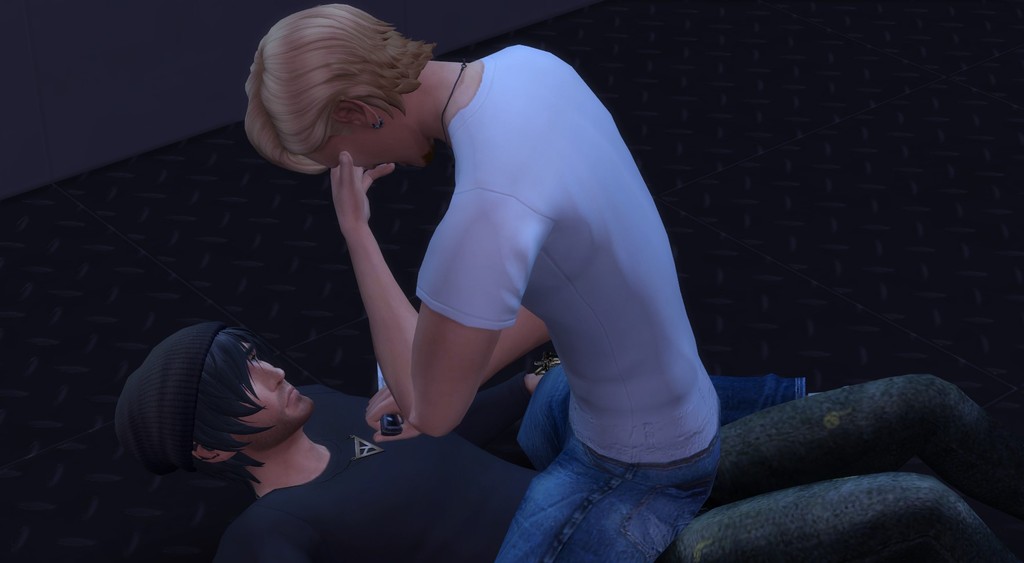 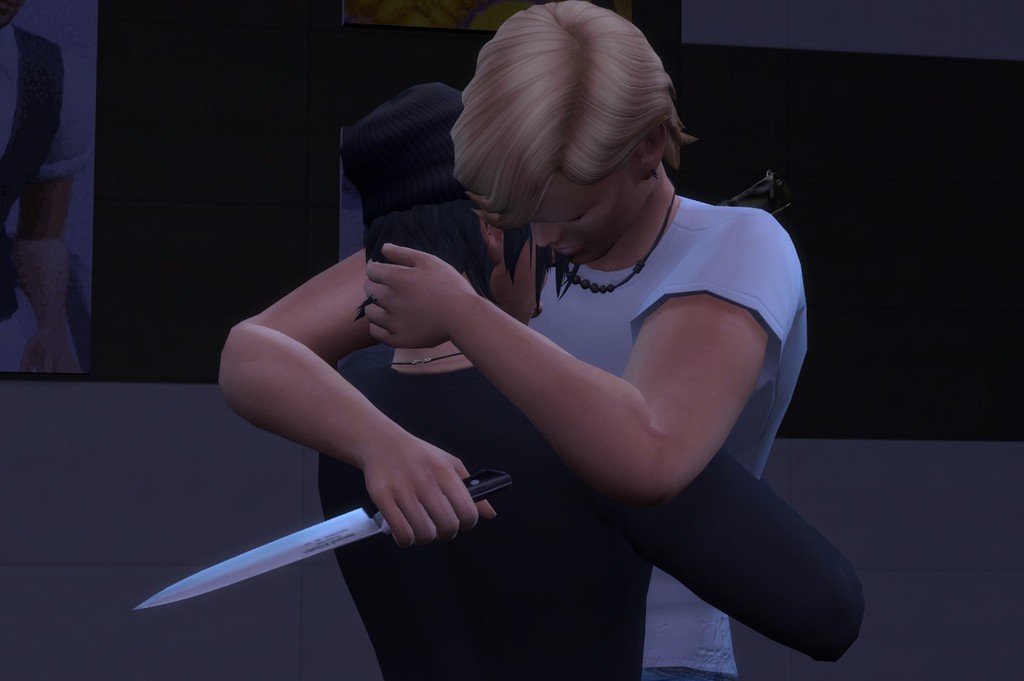 Heart pounding, I held onto him, smelling the sweet scent of his t-shirt and so thankful he was alive. “It’s okay, baby,” I soothed, rubbing his back. “It’s going to be okay.”
​ 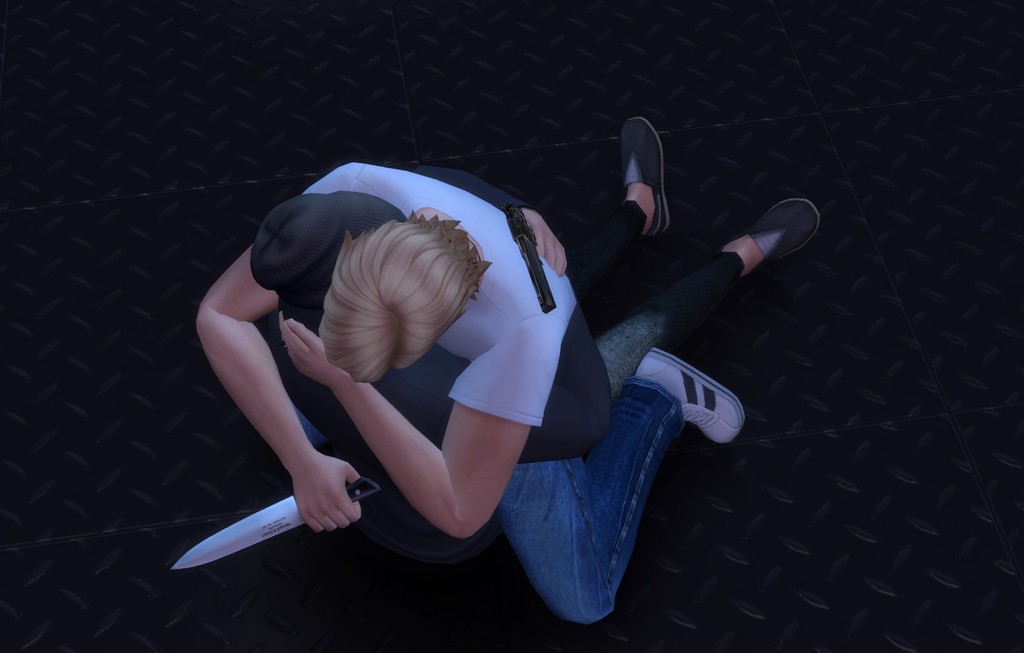 After a few minutes, I kissed Alex’s cheek and pulled him to his feet. He was so unstable, wobbling. I had to hold him as we slowly walked to the next room. I thought I’d see the guy’s corpse on the floor, but I’d only grazed his shoulder. Marco had already put him in cuffs.
​ 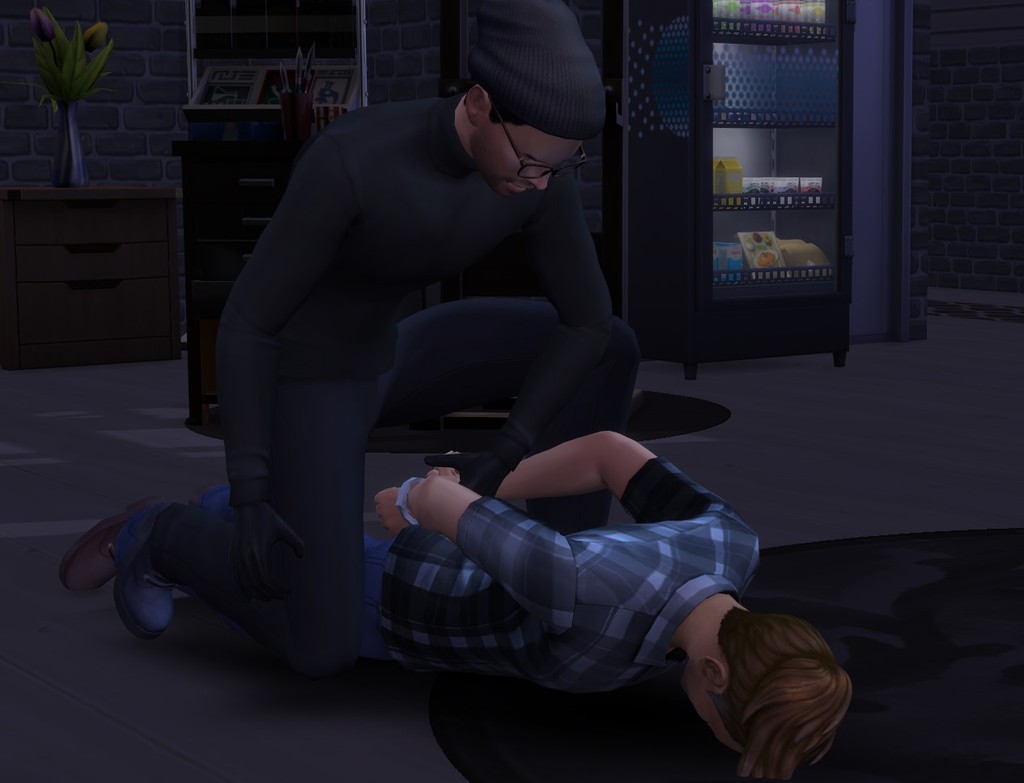 When Alex looked at the man, he grabbed me and buried his head in my shoulder, trembling like a frightened rabbit. “Alex, it’s okay. He can’t hurt you anymore. He’s going to jail for a long time.”
​ 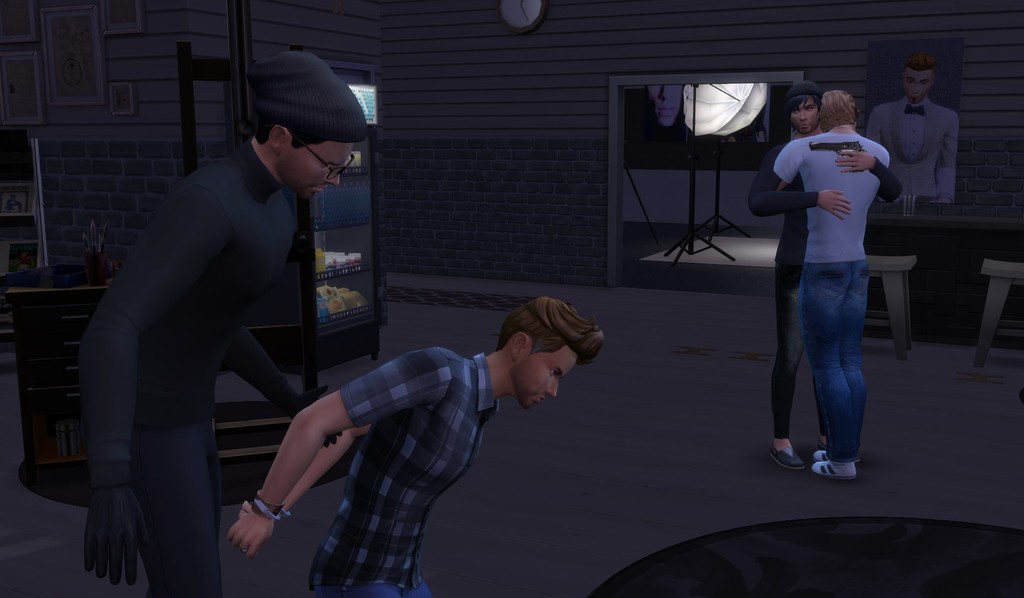 But he just squeezed me tighter, still shaking. I eyed the creep wondering what sick things he’d done to Alex. I wanted to kill him. Make him suffer for hurting Alex so badly.

Unfortunately, I was a lousy shot.
​ 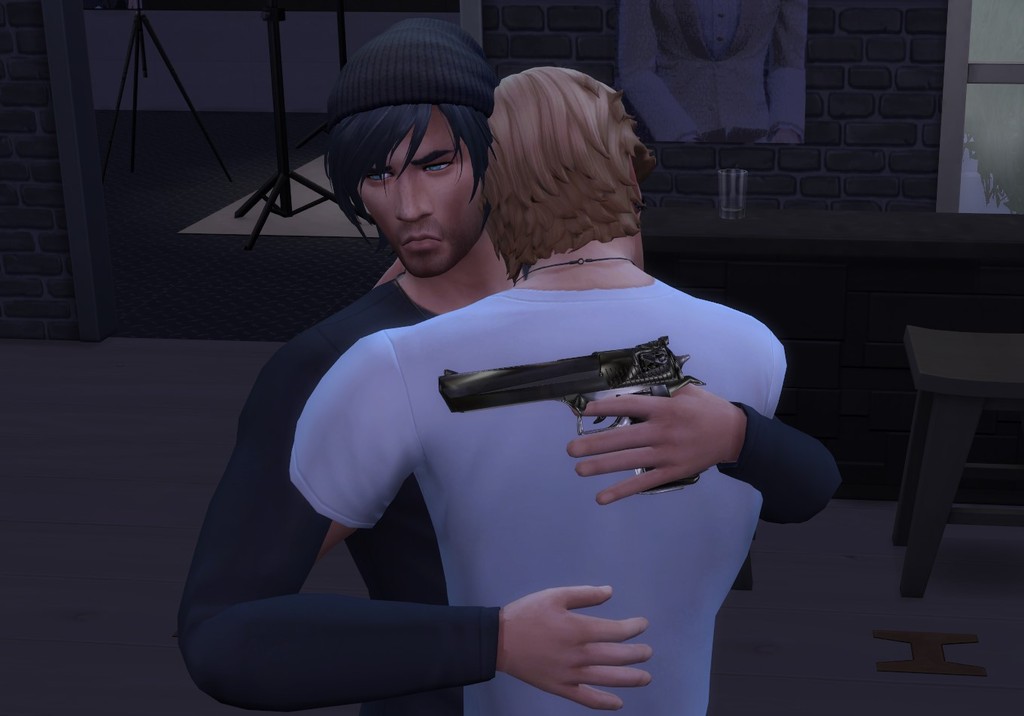 On the way to my place, Alex wouldn’t look at me or answer any of my questions. He only cried, tears streaming down his face as he wiped his eyes. I’d never been so worried about anyone in my entire life. What had happened to him? What was going on inside his head?

Once we got to my room, I encouraged him to get dressed for bed. As we lay there, I held him tight, caressing his arms. He sobbed for a long time but finally quieted down, and I heard his breathing start to deepen and slow. He was asleep.
​ 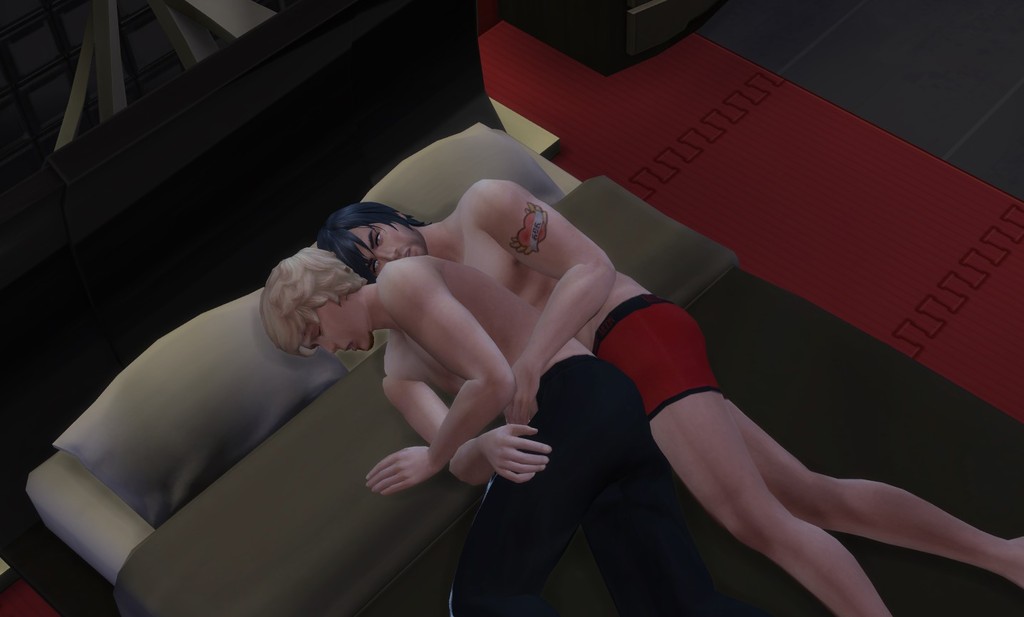 I’d never witnessed someone have a nervous breakdown before, but as I lay there, I felt as if that had definitely happened to Alex. I worried he wasn’t going to be the same after that night. That something might happen to him if I didn’t intervene. But what could I do? Get him to see a shrink? I definitely could insist on it. I’d heard of PTSD (post traumatic stress disorder) and worried this might be occurring. I knew he’d suffered as a child from his mother’s abuse and now this.

Kissing his shoulder, I prayed we’d get through it all. That everything would go back to normal soon. And that Alex would be okay. He had to be. After all, he was tough. The bravest person I knew. Wasn’t he?
​ 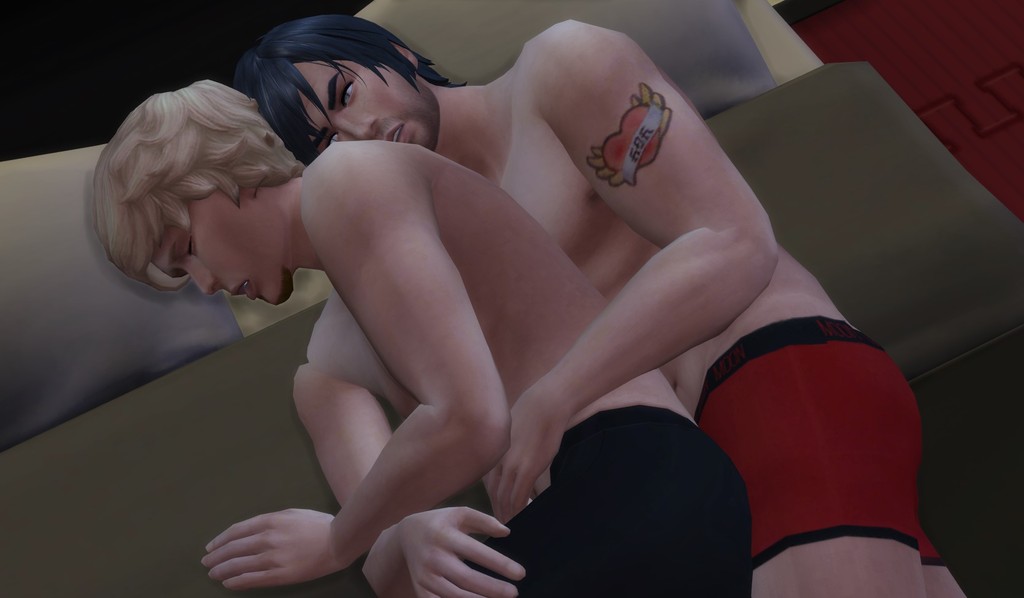 I woke up with a start and saw Alex packing my things in a suitcase. Groggy, I asked, “What are you doing, Alex?”

Without looking up, he said, “We’re leaving. Get your things. Now.”

Shooting out of bed, I got in his face and snapped, “What the hell? What happened?” 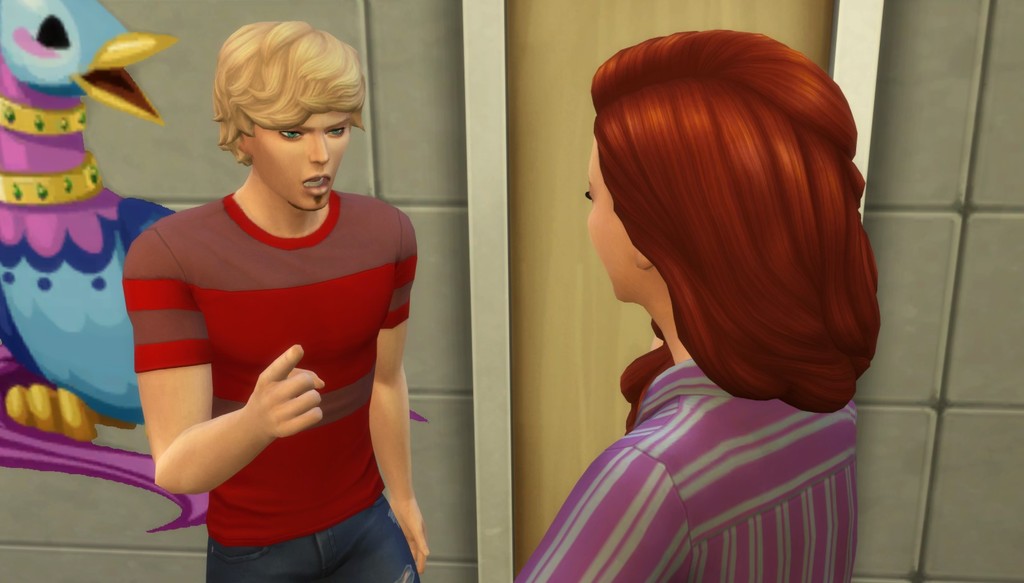 His face scared me. Some stuff must have gone down. I had no idea. Alex never acted like this. Putting my hands together, I tried to calm down. “Okay, God, Alex, give me some fucking reason we have to go. I mean, where are we going? On a little trip? To the ocean? What?”
​ 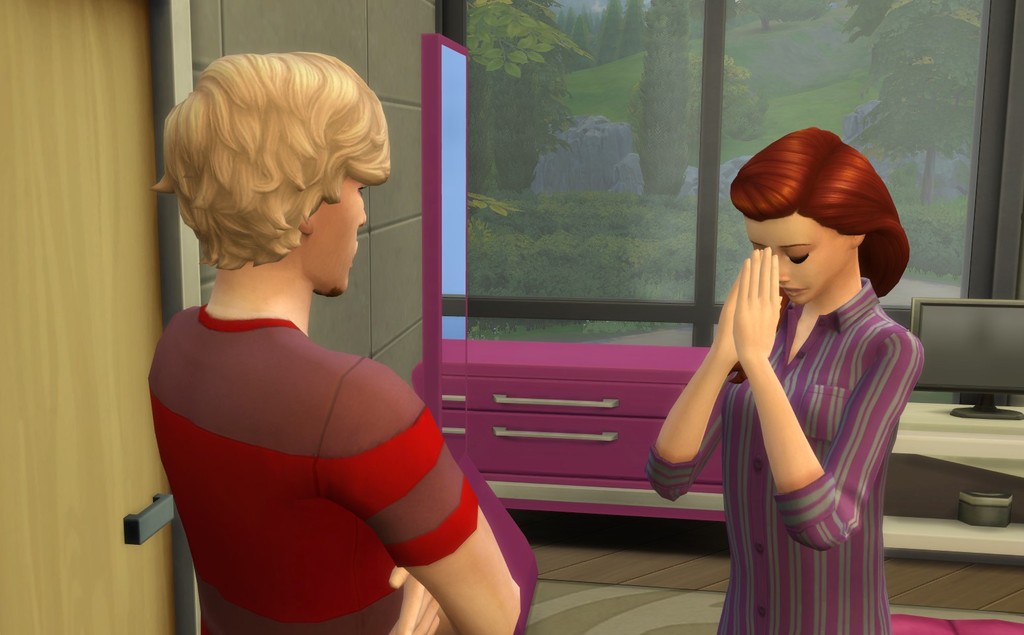 “We’re getting the hell out of here. We don’t belong in this world, Bri. We’re going to the city. I’ve got a job there. We’ve got to go now or Knight...” Biting his lip, he looked down.

I marched away from him, not believing he was pulling me into his fight with Knight. “I don’t want to hear it, Alex. You know you guys will be kissing later on today once you make up. You’re being a drama queen.”

His voice turned low and scary, “Pack the rest of your stuff, Bri. When I get back, we’re leaving and whatever you have is it. Got it?”

Pointing at me, he said, “Oh yes you are and you know it. You have fifteen minutes.”
​ 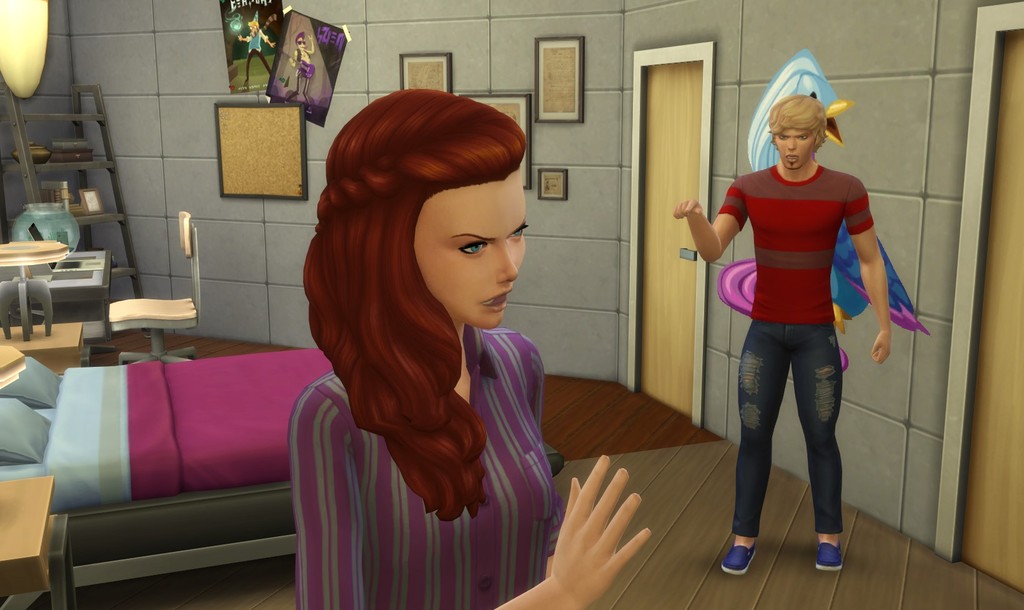 He flung open the door and left.

My throat tightened, knowing he was right. I put my hand on my forehead. Oh, God, what was happening?
​ 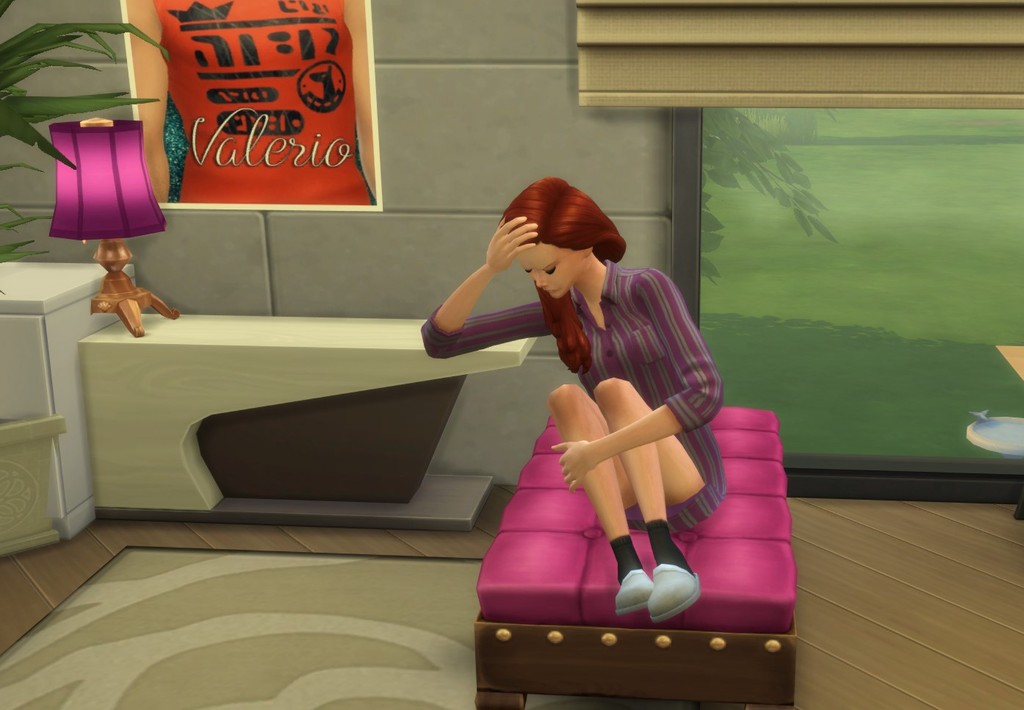