I flinched when I heard how hard I’d slammed the gate. “Damn, Knight, why do you have to be such a dick?” Shaking my head at myself, I decided I’d make it up to the kid the next day. A hundred bucks should put a smile on his pretty boy face. 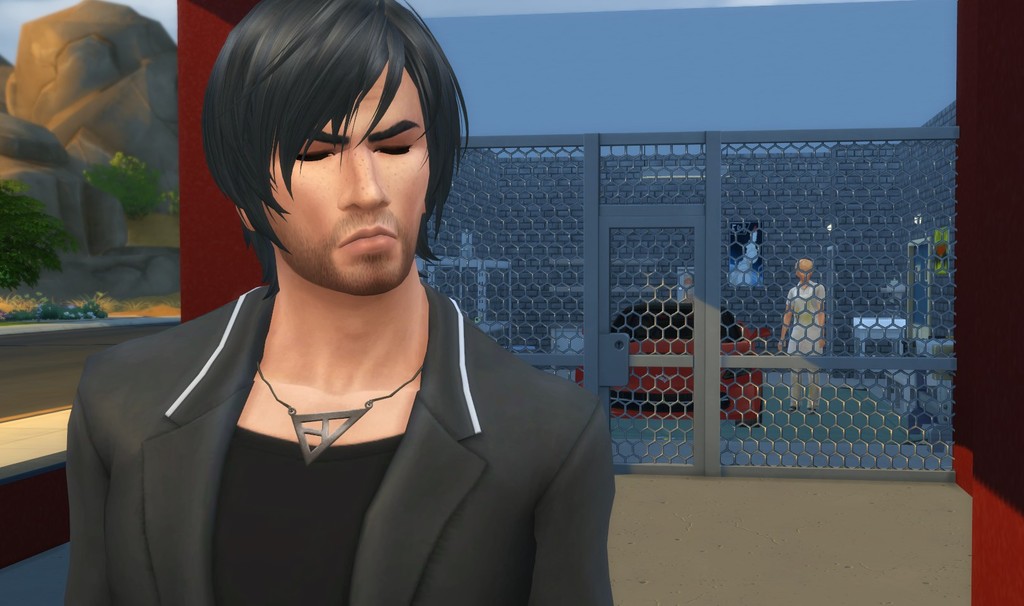 I didn’t want to end up like my father—number one asshole. I’ll never forget how he’d yell at our maids or his assistants or anyone he’d hired. One by one they’d quit or get fired. He’d throw gigantic tirades if he didn’t get his way. I remember one time, he made his driver go around the block because he didn’t park the car exactly five inches from the curb. And look at me. I’ve just done the same thing to some poor teenager.

Sighing, I pulled out my phone.
​

​“Marco? Yeah, I need a ride. My car is still out of commission. Should be fixed tomorrow.”
Brianna

I studied Benton’s face. Red glossy hair. Dark eyes. Gorgeous tan skin. So, why am I invisible to him?

“Hey, Bri!” Kyle Richardson waved awkwardly. How could the second boy in line to all the money in the Richardson Legacy be so goofy? I tried not to roll my eyes.
​ 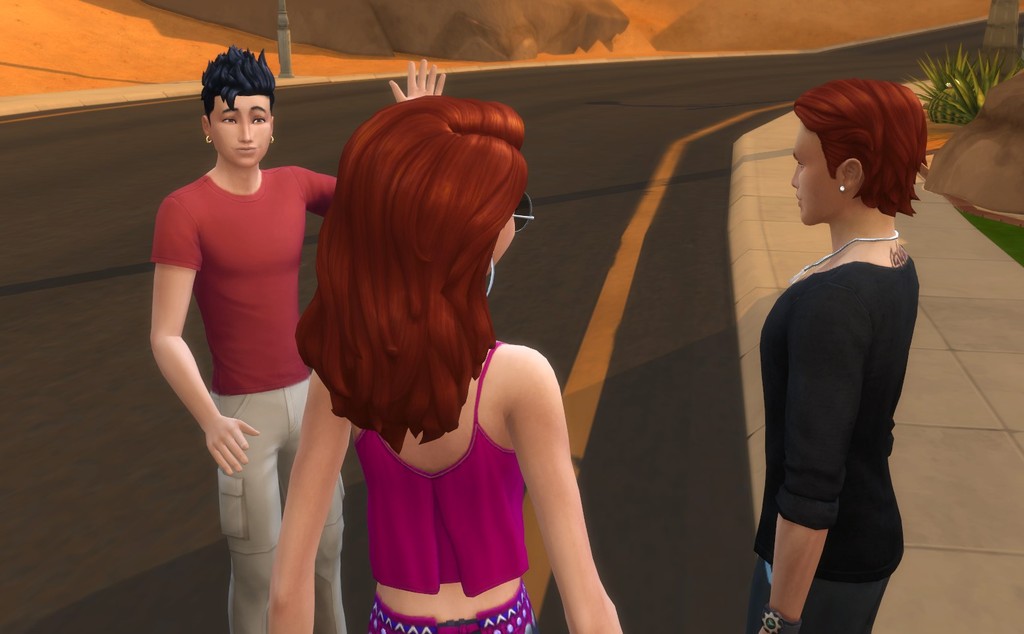 He put his hands in his pockets. “You’re coming tonight, right?”

Shrugging, I picked at my nail polish. It was time to get a manicure again. I did that on the sly. Alex would kill me. I spend way too much money. “Sure...if I can get away from my boyfriend.”

“You have a boyfriend?”

Now I did roll my eyes. “Duh...but I’m not married, so pizza sounds good.” I sidled up to Benton. “Are you coming, too?”

He brushed his fingers through his crimson, silky locks. “Uh, sure. Sounds fun.”

A few hours later, we all met up at Dinny’s Diner. It’s a cute place and their pizza is good. Problem for me was that Alex wouldn’t give me any spending money. Said I’d already gone through my allowance for two months. I was so mad, I’d slammed the door when I left.

Benton wasn’t giving me the time of day, so I decided to swallow my pride and talk Kyle into paying. He’s rich. Surely, he wouldn’t mind. 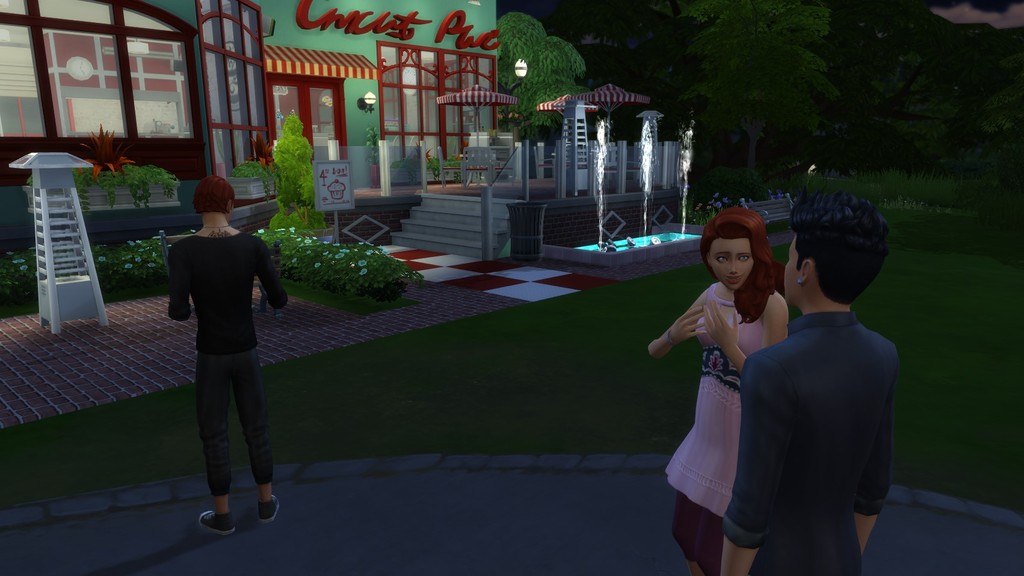 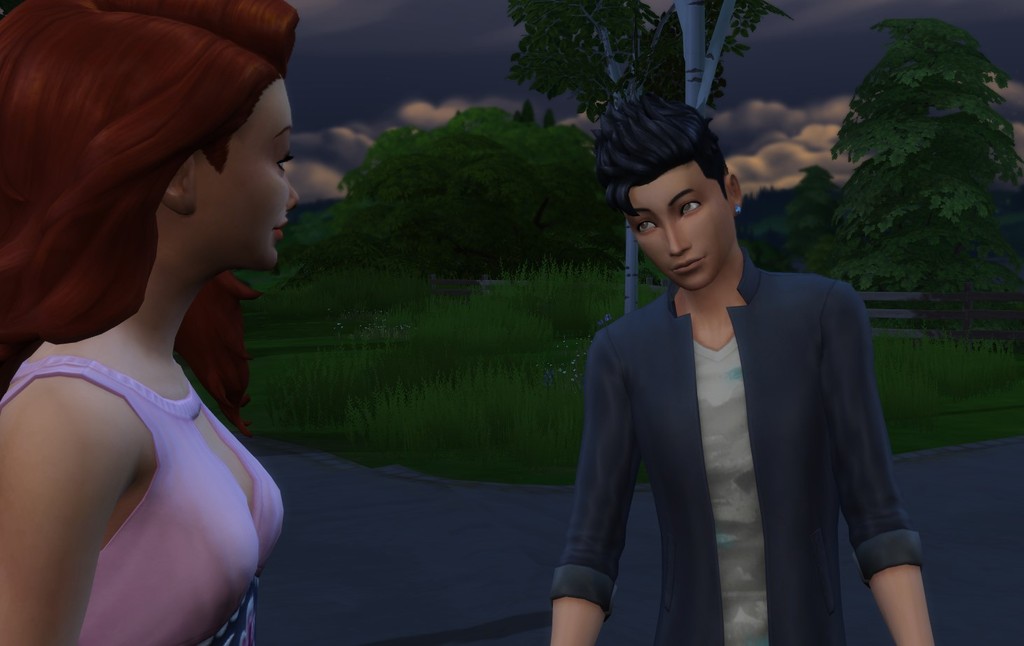 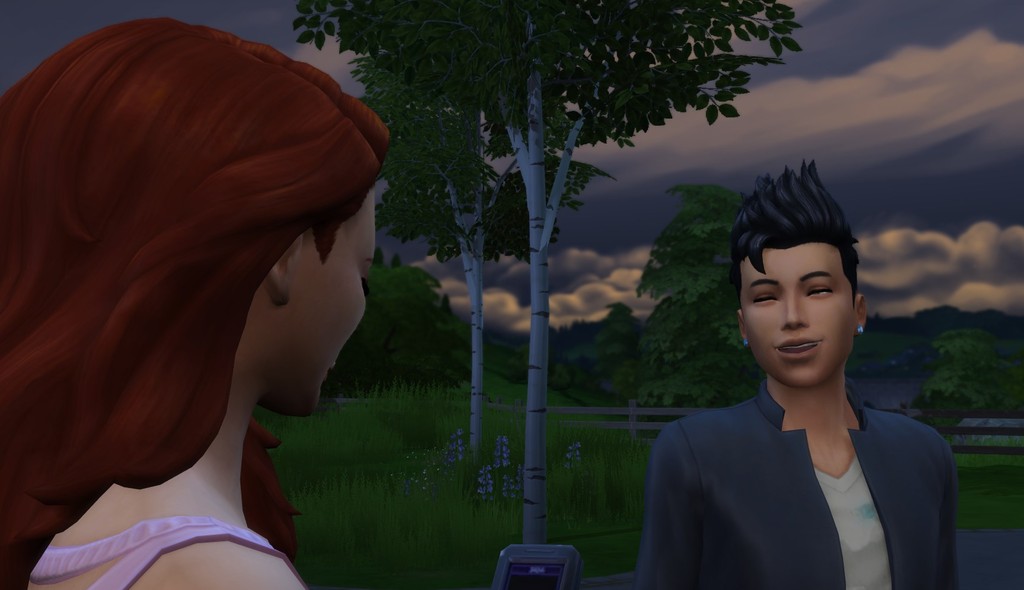 My stomach sank. “What?” 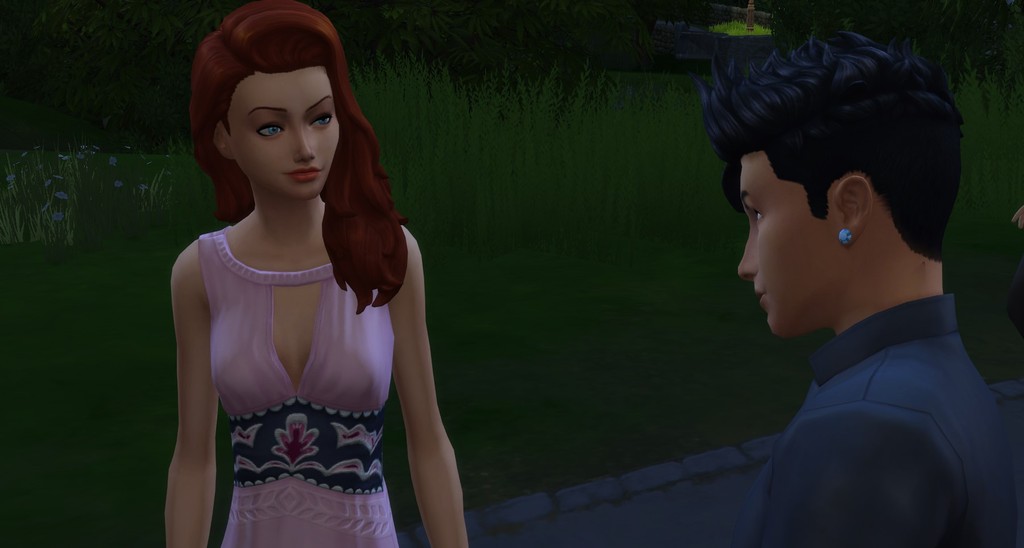 No, no, no! This couldn’t be happening. How would I ever snag Benton if his best friend was mooning over me? This was not going how I’d planned. Knitting my eyebrows, I said, “I can’t. I’ve got a boyfriend or did you forget that fact?”
​ 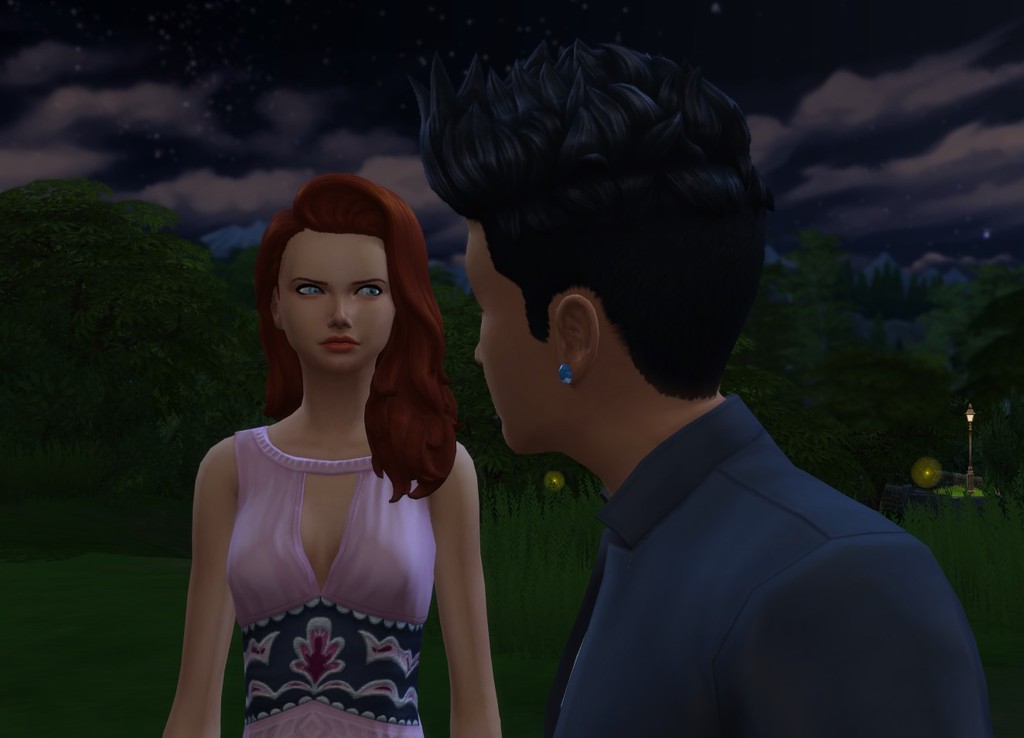 “Boyfriend? Really? How come I’ve never seen him? Does he go to our school?”
​ 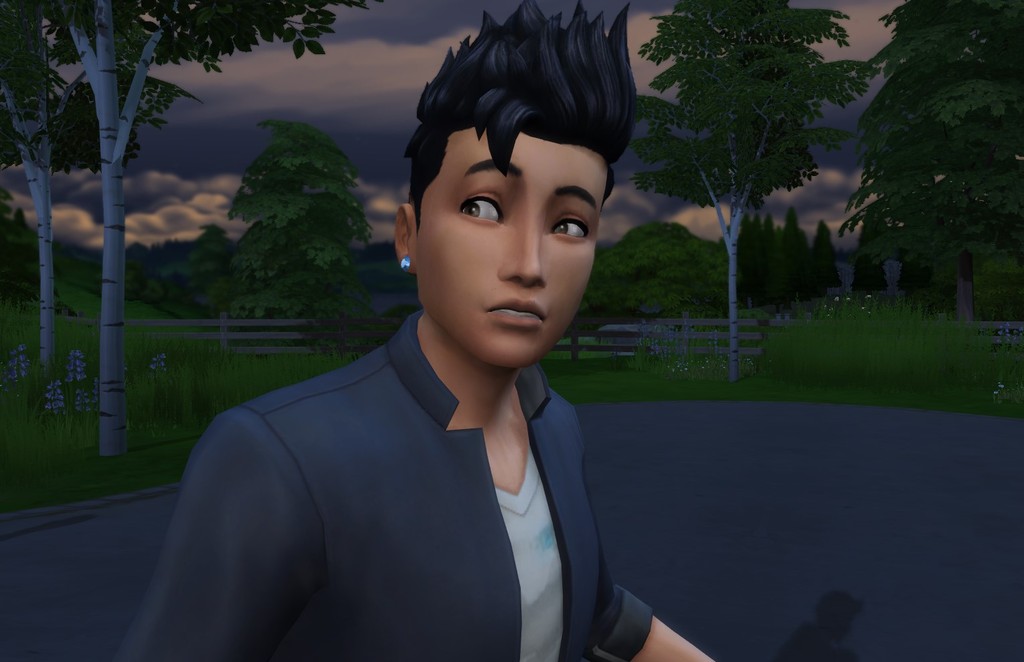 I searched my brain for an excuse. Of course I didn’t have a boyfriend. That was just a cover to ward off Kyle. Unfortunately, it wasn’t working. I was hoping to get close to Benton, but Kyle was like sticky glue that wouldn’t come off.

Then I thought of Alex.

“Um, yeah, like...he’s....older. Twenty-five to be exact. And he’s really into martial arts and boxing. So, if he even senses I’m dating around, he’d come after you. Seriously, I’m just thinking about your health, Kyle. You really don’t want to mess with him.”
​ 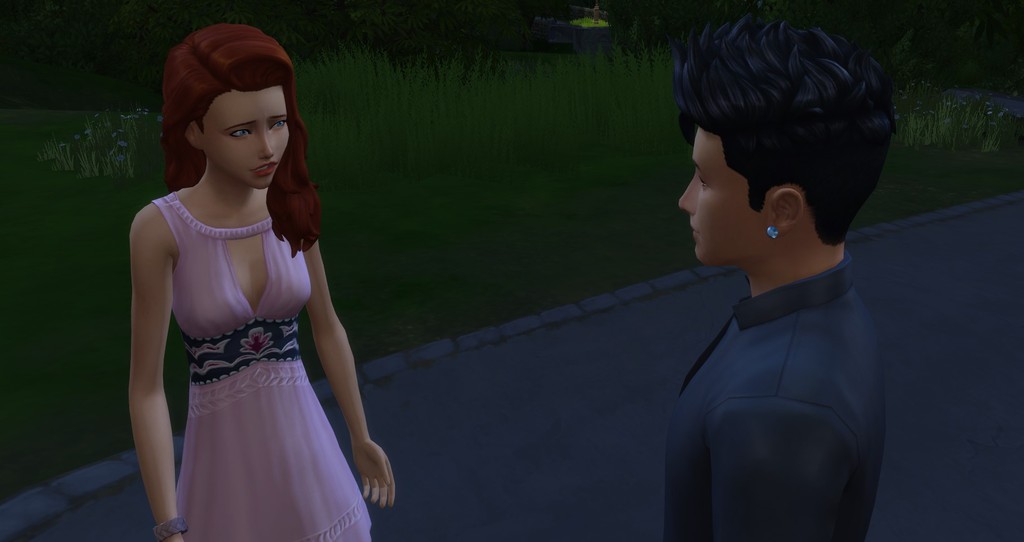 Benton got in the middle of us. “Hey, guys. Are we going in or not? I’m starving.”

Kyle pointed at me and said, “Yeah, we’re going and I’m buying.” He whispered in my ear, “And you’re going out with me. I don’t care what your boyfriend says.”

Putting his arm around me, he hustled me inside.

If I had been a cartoon character, steam would have been coming out of my ears. Shrugging off his arm, I pushed past Kyle and sat next to Benton, looking over the menu and hoping Kyle wouldn’t sit next to me.

Benton watched me. I could feel his eyes. My face heated up 1000 degrees. “What kind of pizza do you like?” he asked.

“Anything with loads of cheese.”

He shrugged. “Sensible. Cheese won’t burn your tongue. Hey, Bri...do you really have a boyfriend?”
​ 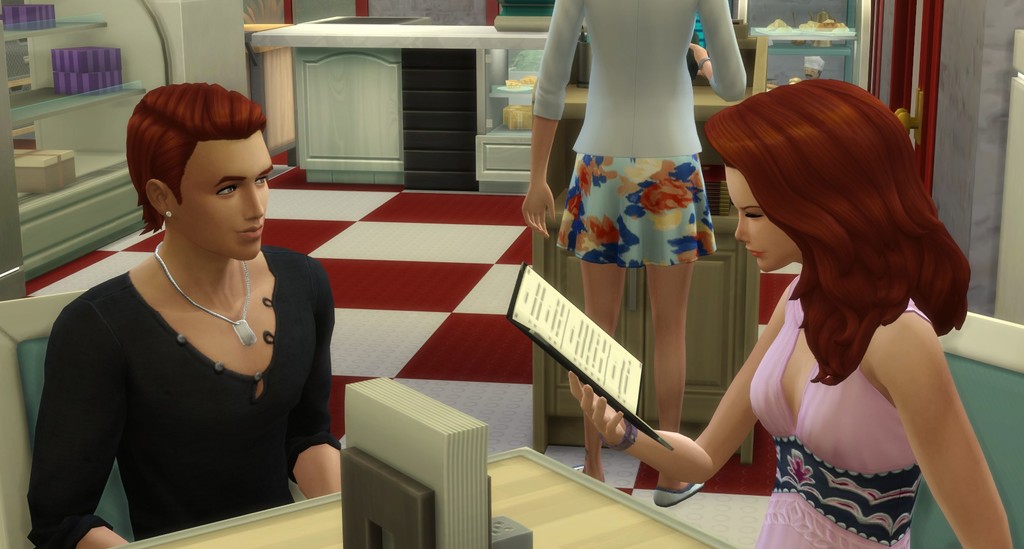 ​My stomach did a twirlywhirl. My lie was now getting me into trouble. I wanted to say, “NO! Of course not! I’m free to go out with you, gorgeous hunk of man-boy.” But I had just told Kyle that lie and I couldn’t get out of it. I grimaced and didn’t answer.

Just then, Kyle swooped down on us. “Hey, dude, you’re not hitting on my girl are you?”
​ 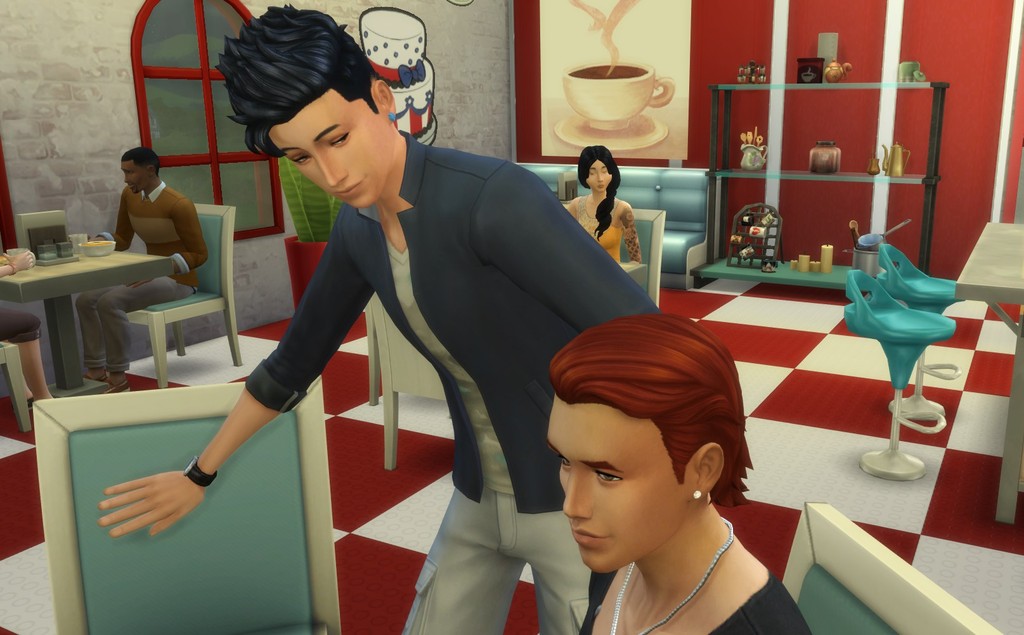 I folded my arms. “I’m NOT your girl. How many times do I have to say it, Kyle?”

He arched an eyebrow. He wasn’t buying my lie. “Produce this boyfriend and I’ll leave you alone.”
​ 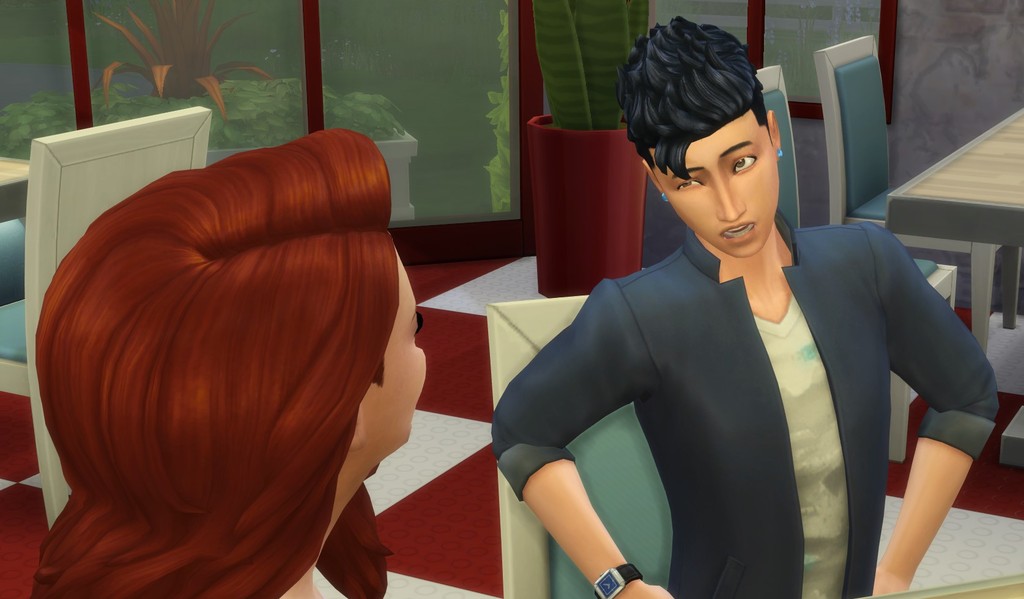 I could feel my eyes pop out of their sockets.
​ 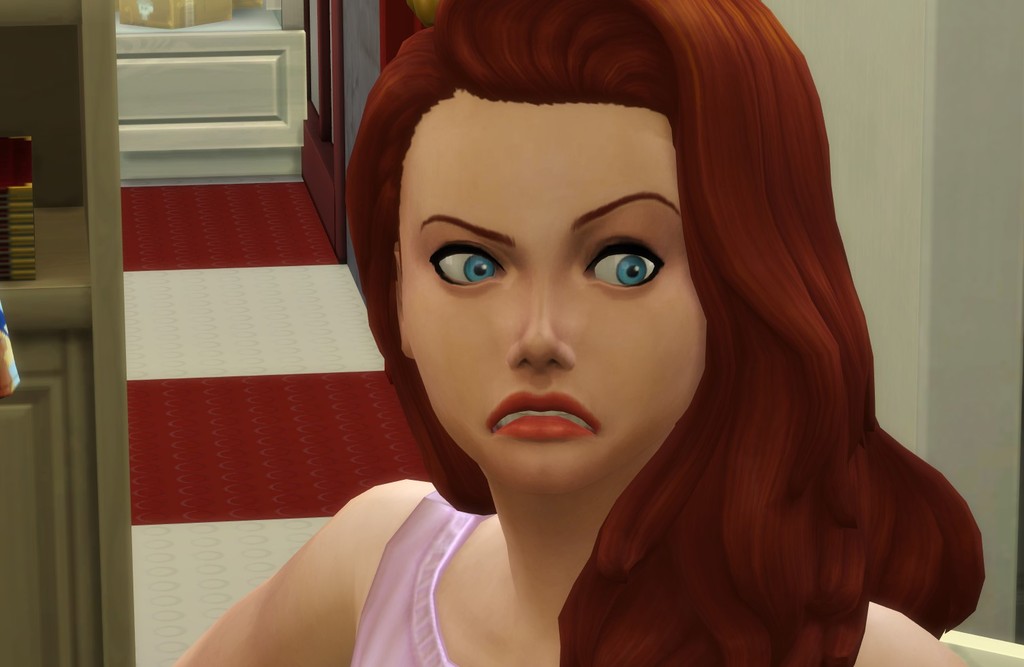 Without thinking, I dialed Alex’s phone. “Um...hey...I’ve got a problem. Could you come to Dinny’s Diner and help me out?”
​ 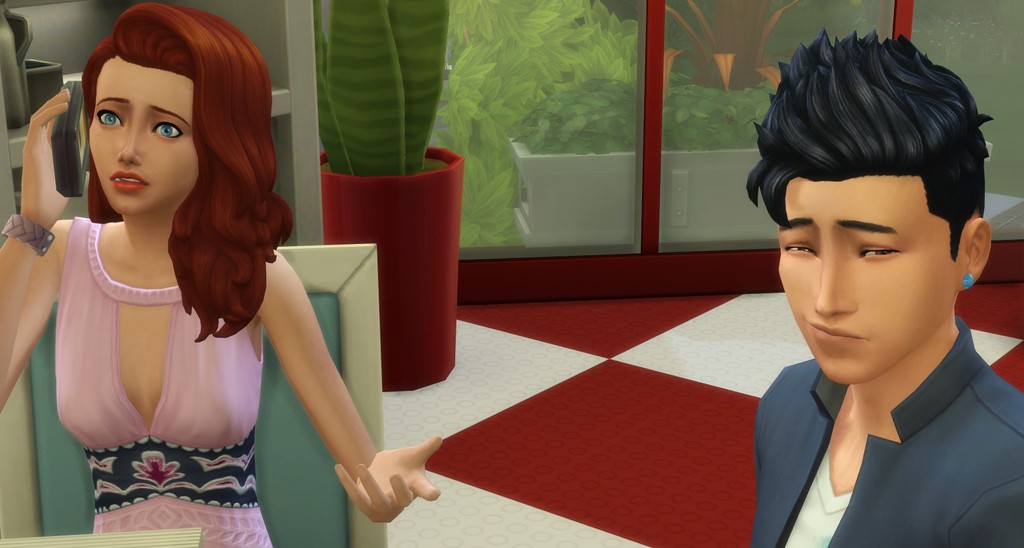 “I know it’s late, but please. Just come over. I really need your help. I’ll explain when you get here.”
​ 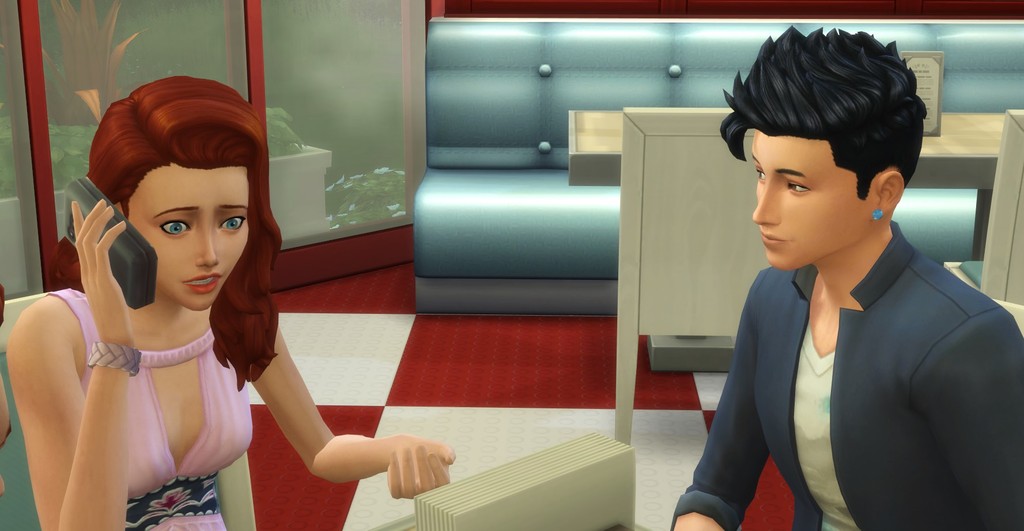 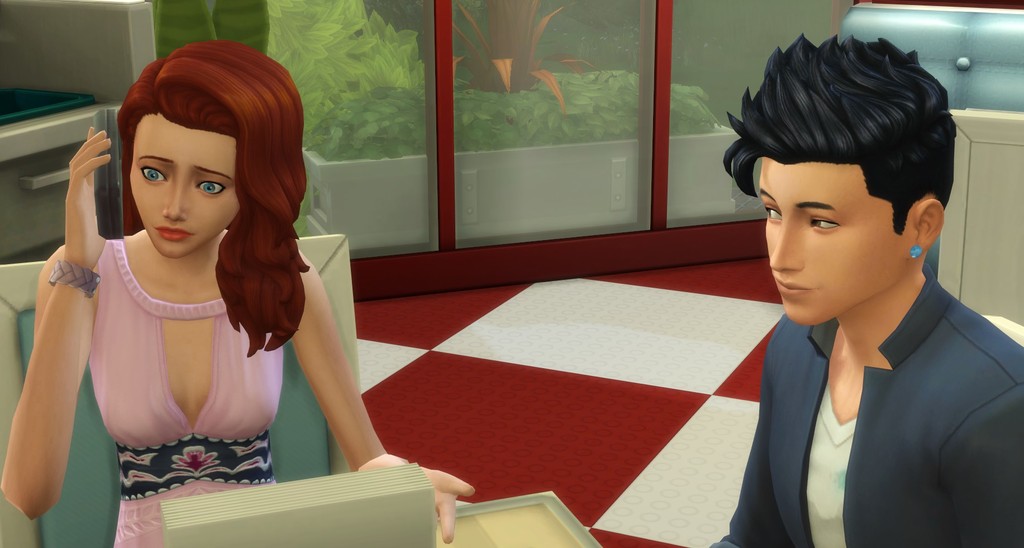 Kyle shot me a look. “That didn’t sound like a deep, loving relationship. You had to beg him to come to the pizza joint? And you didn’t tell him you were having trouble with a guy? Hmm, Bri...sounds like a wonderful boyfriend.”

“Never you mind. He’s coming. And you’d better hope he doesn’t get mad.”
​ 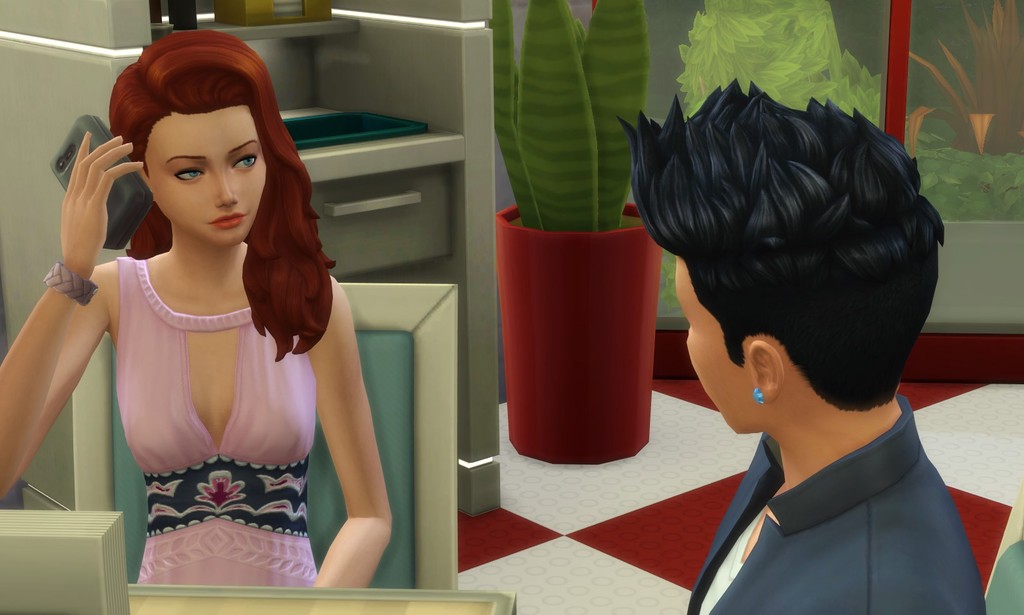 After we ate, we all tromped down the steps, waiting for Alex. My stomach churned.
​ 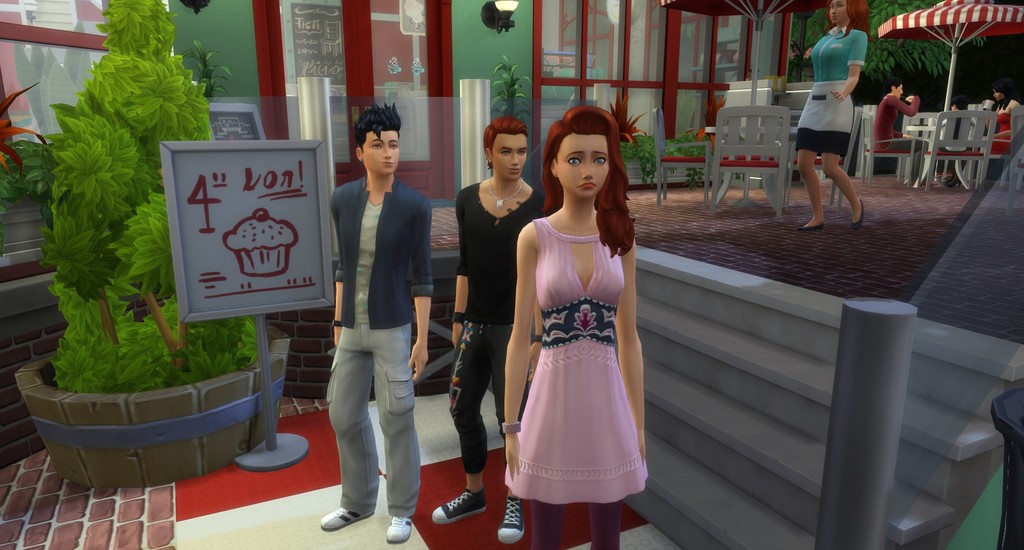 Minutes ticked and no Alex.

“Where is this lover boy, Bri? Looks like he’s not showing up.”

“He promised,” I said. And then I saw a dark figure in a red hoodie. 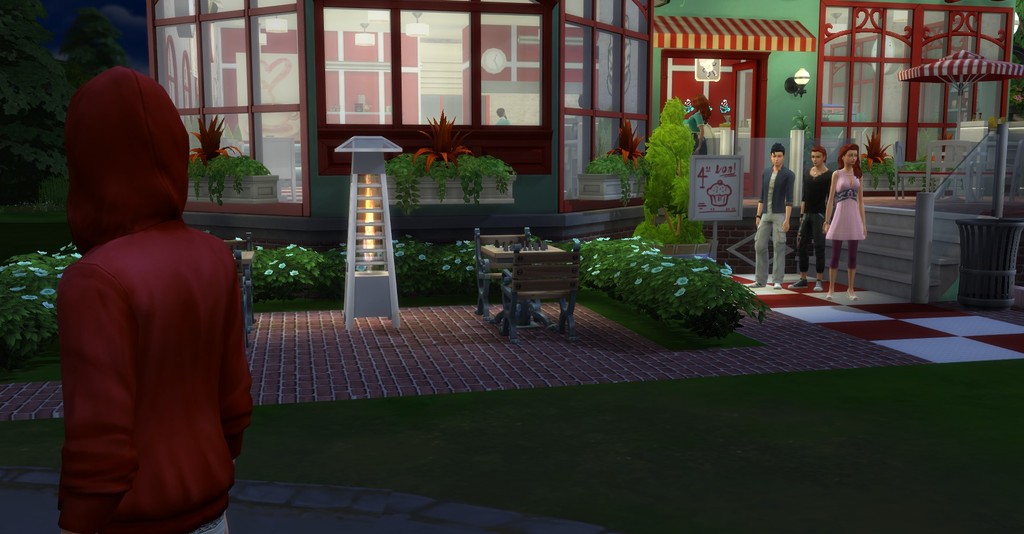