Seth just texted that his plane would arrive at 3:35 this afternoon and he'd come by on his way home. I thought that was so sweet of him because I knew he'd be exhausted. Going East is a nightmare on sleep.

I was so thankful his parents survived although his dad had a long road of rehabilitation ahead of him. His mother went through a few surgeries on her ankles, but otherwise was fine. Seth's calls had been sporadic at best because of the time change. I just couldn't wait to see him. I didn't realize being away from him for a few weeks could be so agonizing. 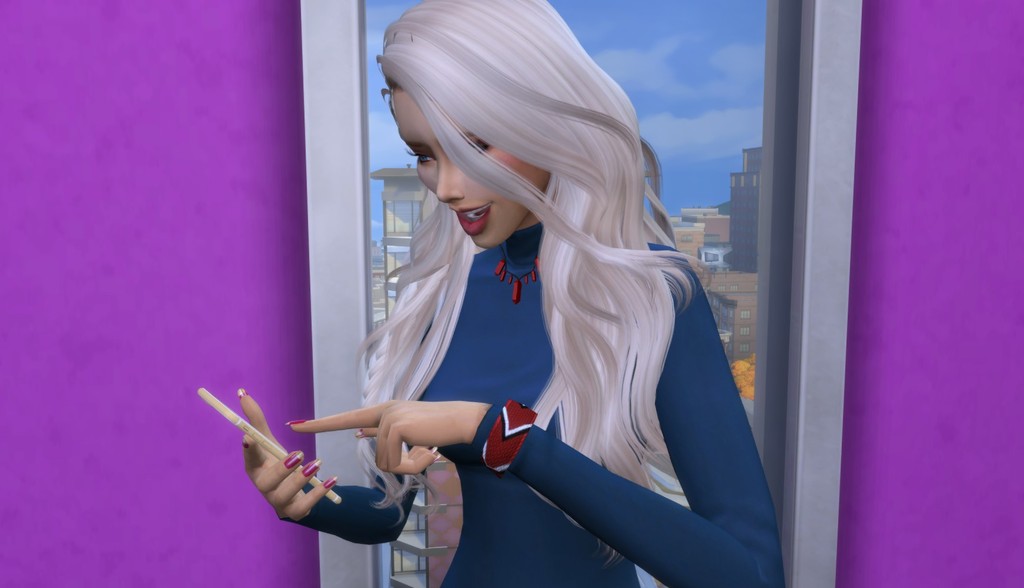 "Is that Seth, love?" Naomi asked.

​"I was wondering if Julien could spend the night then. He's got to pull a double shift and his job is close by. Since you wouldn't be home..."
​ 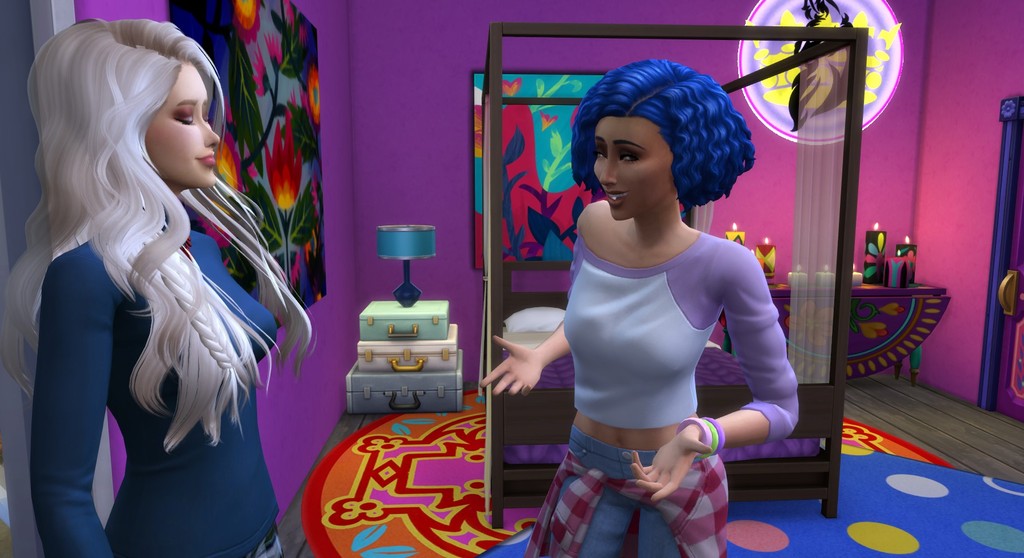 "In about an hour. He'll stay for a few then go to his next job. It's really been a nightmare for him. Thanks for being so lovely about him coming from time to time."

Then I thought about it. Seth might come over at the same time. I wasn't sure if Seth would want Julien sleeping in my bed even if I wasn't here. And with him just getting home, I didn't want a fight. "Can you hold him off for a while until Seth picks me up?"

"Okay, sure...but I've got an even better idea," Naomi said with a twinkle in her eye. 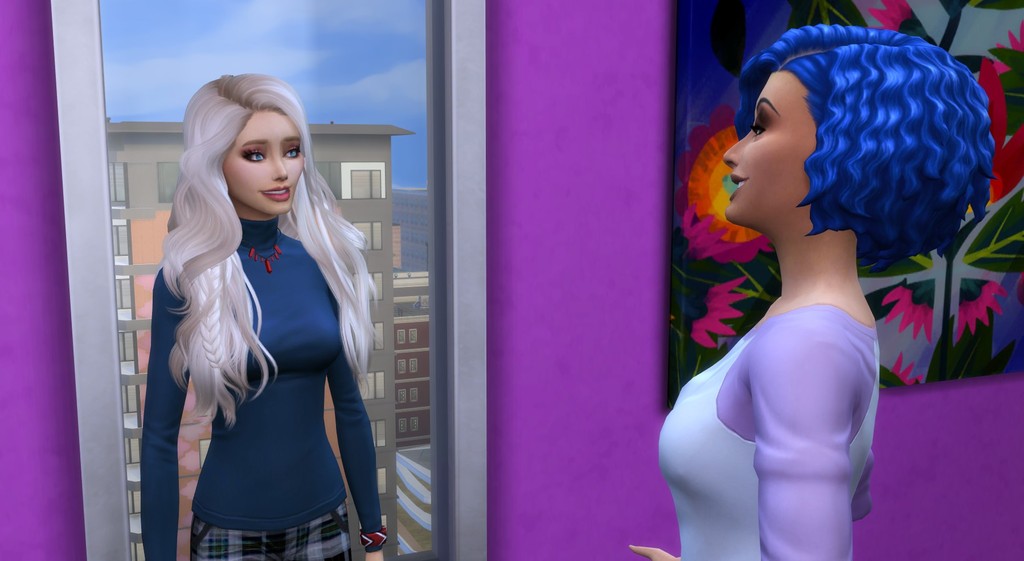 "Why don't you surprise him at the airport? I'm sure he's dying to see you, too. And then there won't be any awkward meetings." She winked.
​ 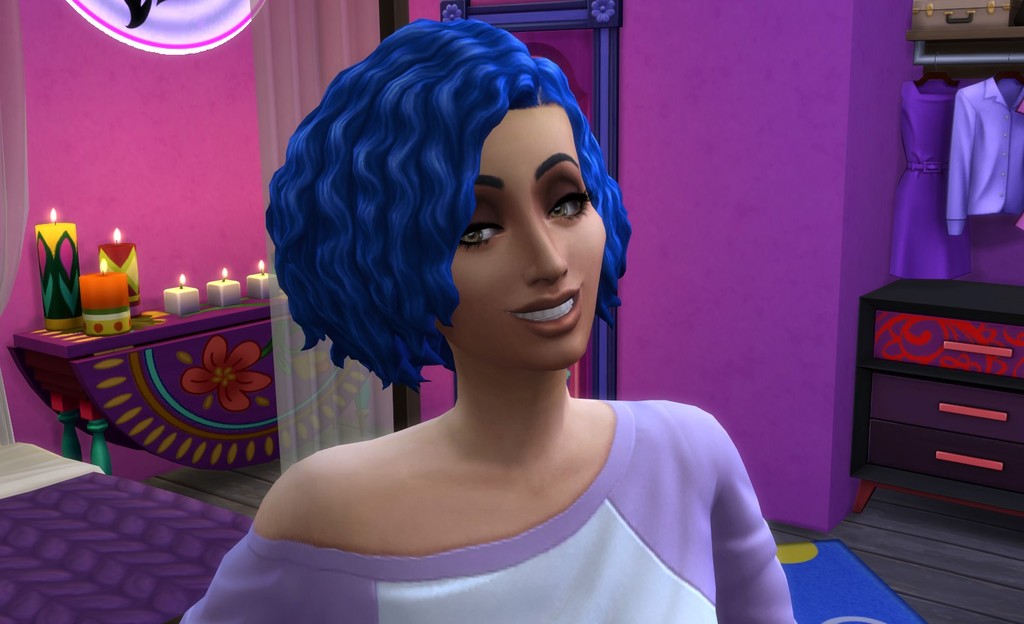 "That's a great idea, Naomi! I have just enough time to head over to the airport. You're a genius!"

"Splendid, darling," Naomi said. "Give Seth a kiss for me, will you?"

"Of course." My insides felt as if they were going to explode with anticipation. I couldn't wait for his arms to wrap around me and I could show him how much I'd missed him. 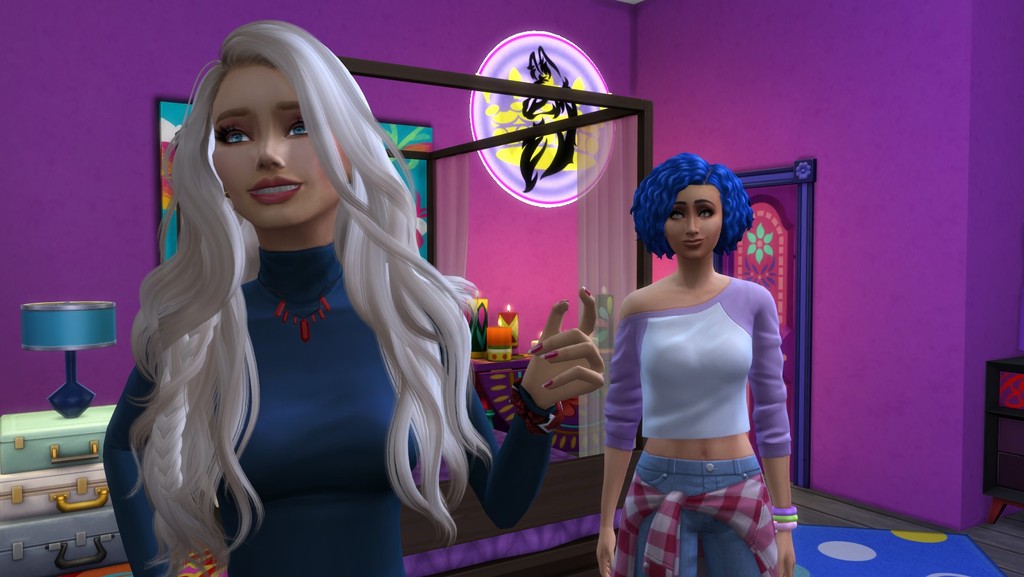 The airport was almost an hour away, but I'd made it just in time.
​ 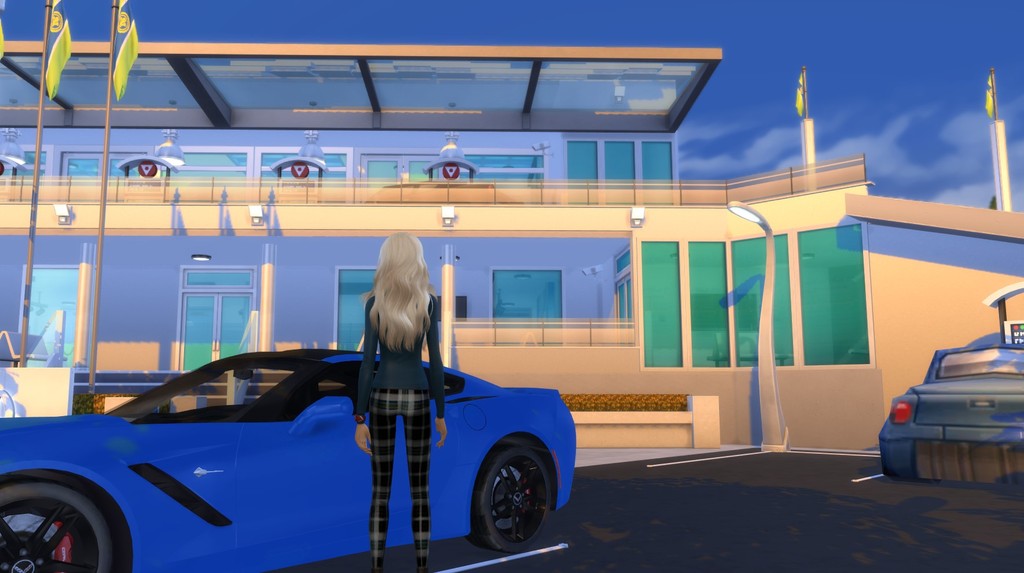 I hoped he didn't come in early. I'd forgotten to check the arrival times. 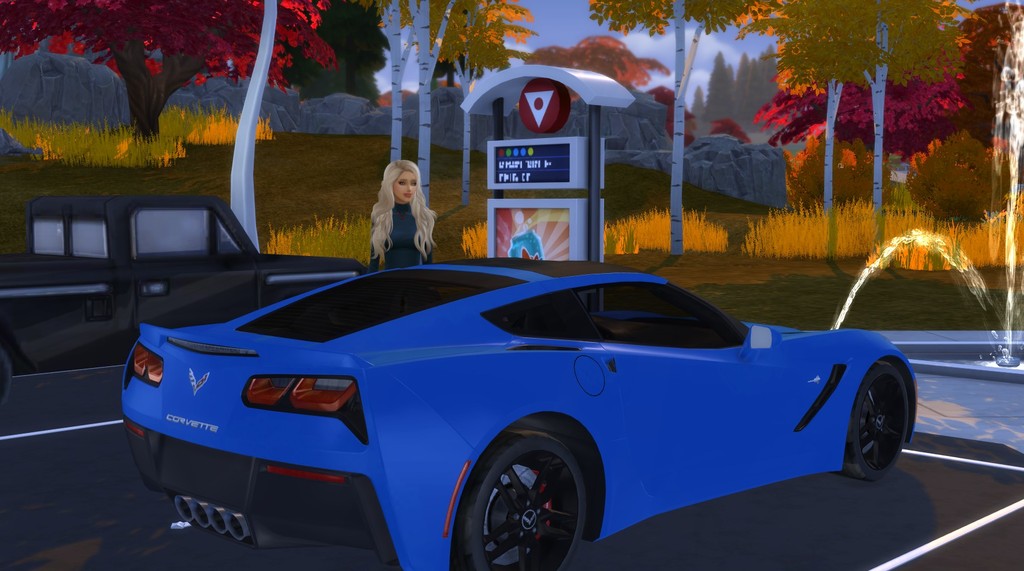 Minutes passed that seemed like hours. Then a bunch of people streamed down the stairs as passengers made their way to baggage claim where I stood.

My heart leaped into my throat when I spied my 6 foot 5 hunk of gorgeous walking down the steps.

And then it was like a splash of freezing ice water hit my face. 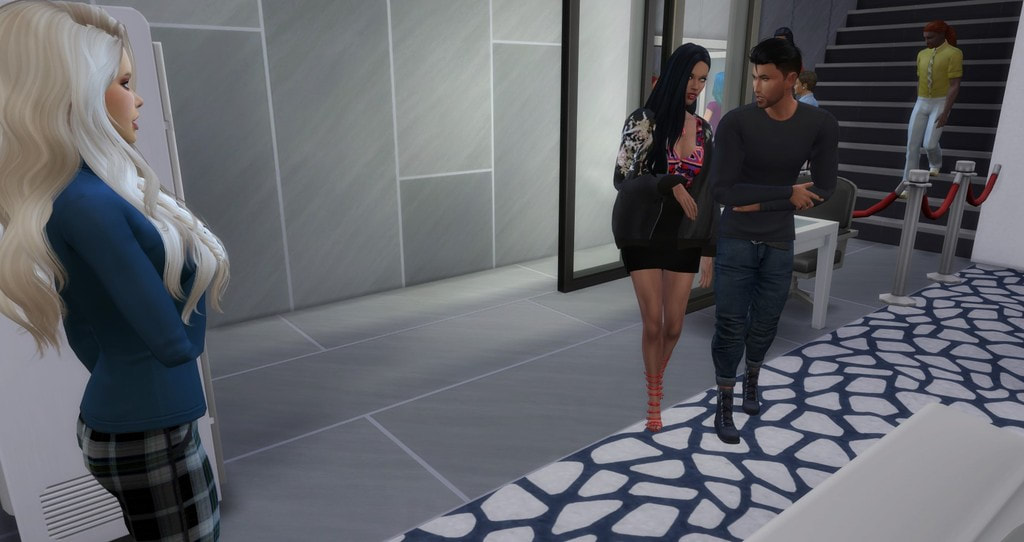 Jealous feelings flashed through me but I put them out. Why was I getting defensive? She was a family friend, after all. Maybe she wanted to see the states and happened to be on the same airplane. No matter what, there had to be a good reason for them chatting together all lovey dovey like this. 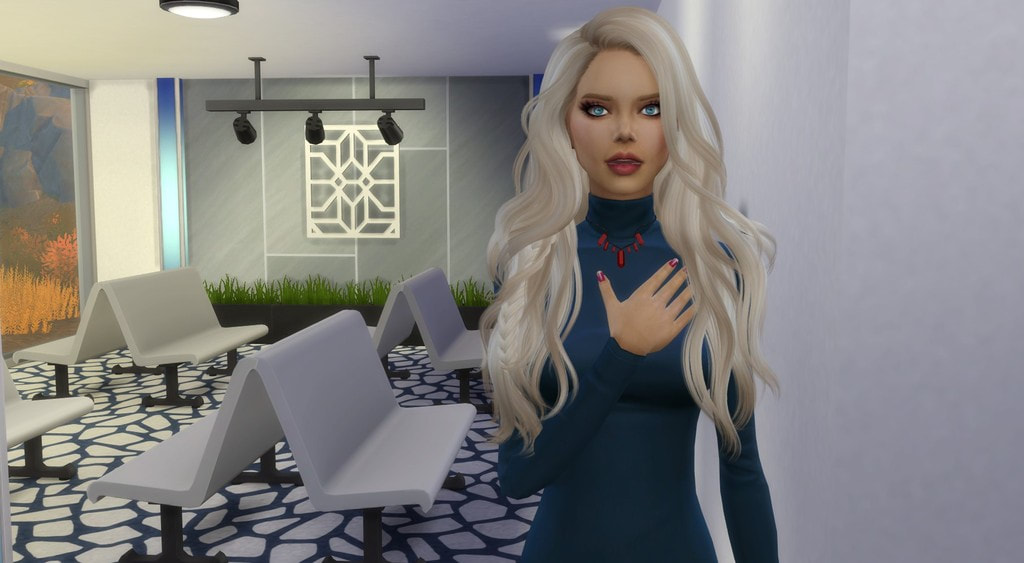 Pulling away from her as if he was a teen who'd just been caught necking, he gasped, "Siobhan...w-what are you doing here?"

I countered, "What is SHE doing here?" 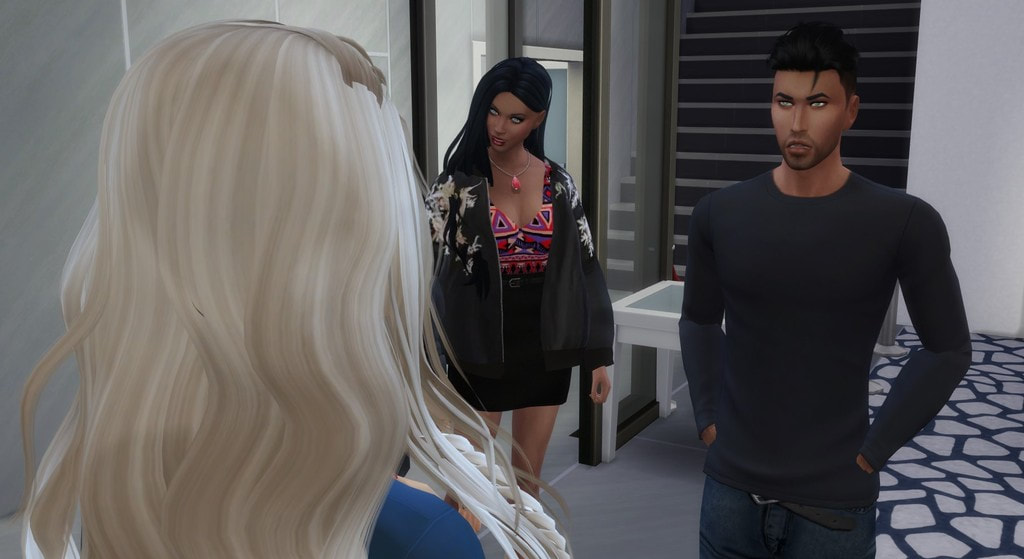 Glaring, I folded my arms.  "Is that true?" I almost screeched.

Putting his hands over his face, he said, "Shut the hell up, Io, and fucking go sit down. I need to talk to Siobhan." 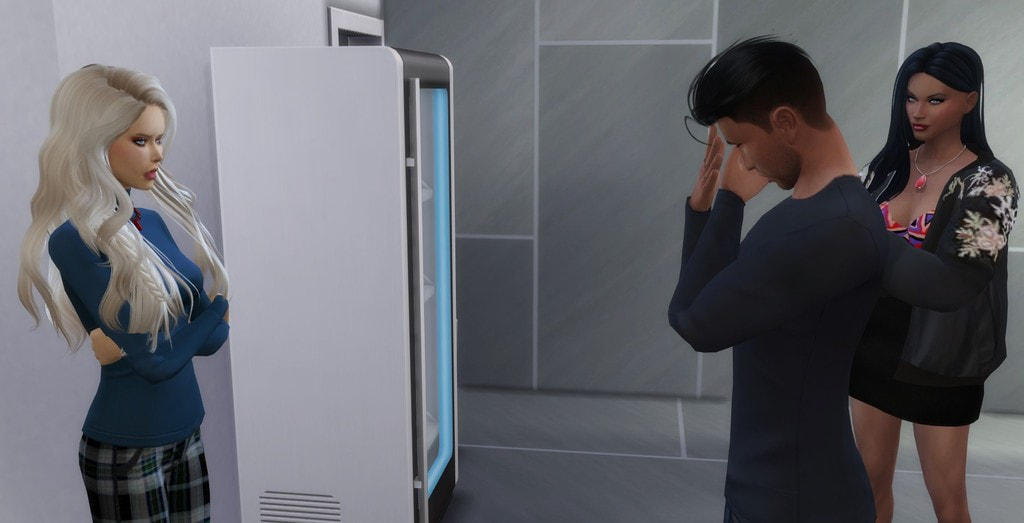 "It is true," I whispered. "You fucking asshole." 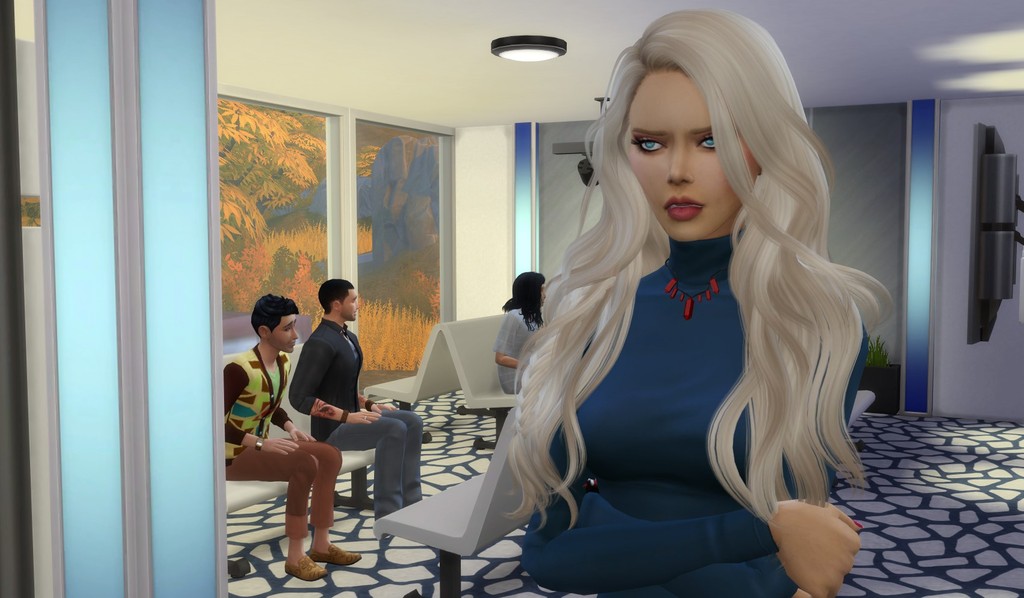 ​But I wasn't about to listen to him. Bolting out the door, hot tears stung my eyes as my throat pinched painfully. How could he do this to us? Lie to me this whole time? Tell me I was his whole world then turn around and marry Io? This was a total fucking nightmare. I had to get away.

His heavy boots clapped over the sidewalk as he pounded behind me, shouting, "Wait, Siobhan! Let me talk to you!"
​ 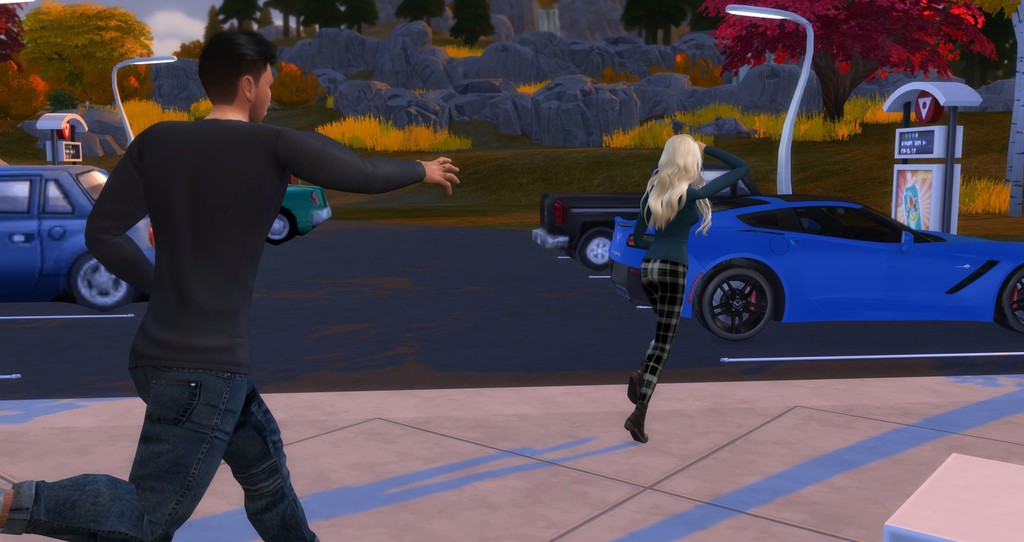 Fumbling for the keys to my car, Seth jerked my arm, spinning me around before I could get inside. "If you would just listen to me," he cried, out of breath from running. 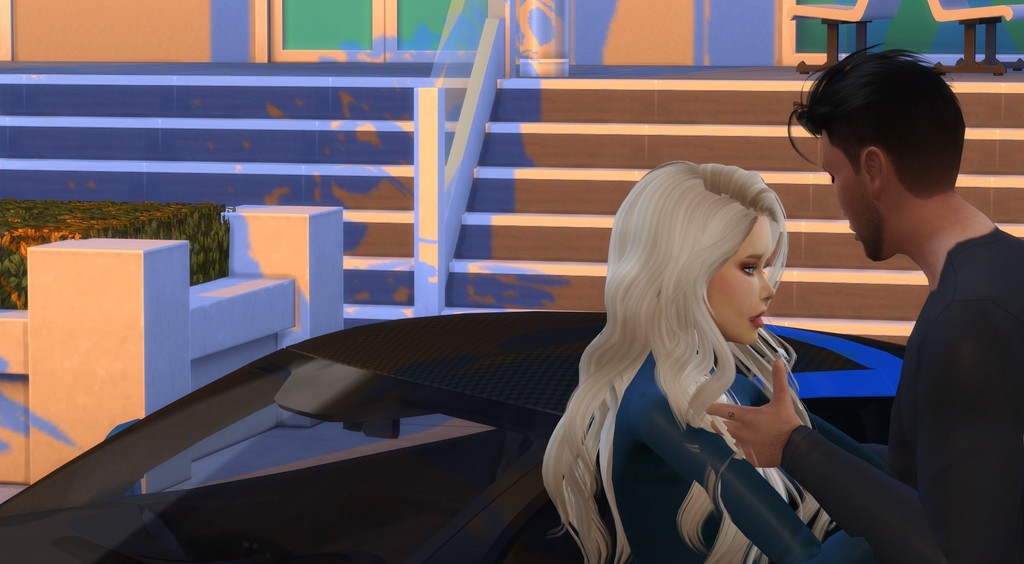 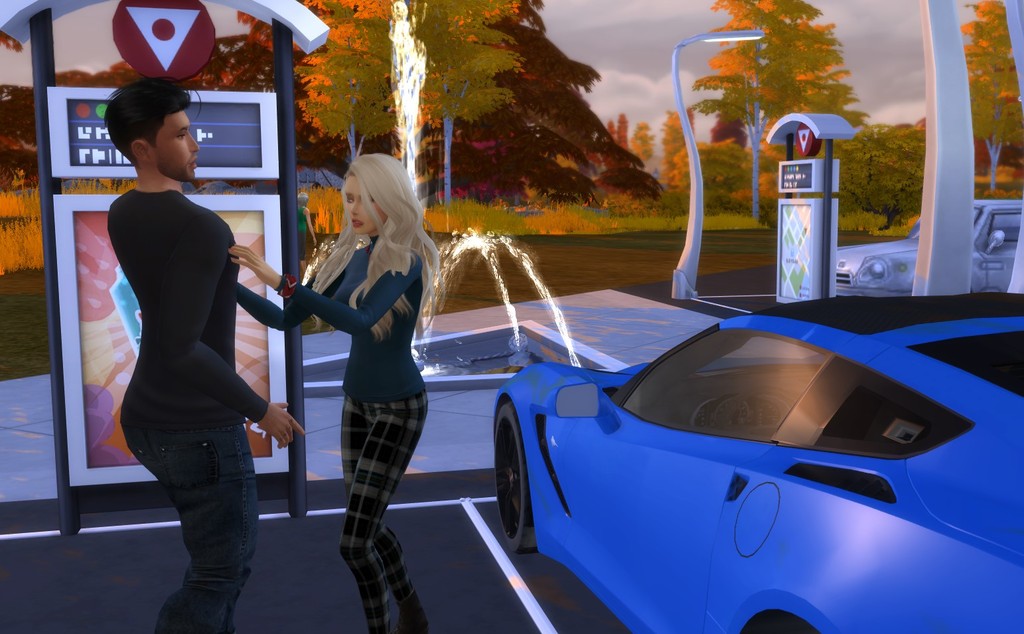 "Siobhan, please. Won't you let me explain myself? I didn't marry Io. She just said that to hurt you."

Rubbing my eyes, I asked, "Are you with her?" I couldn't believe I actually sunk so low as to even harbor any thoughts of talking to him. It was obvious he was with her. She was all over him and he had been laughing with her. 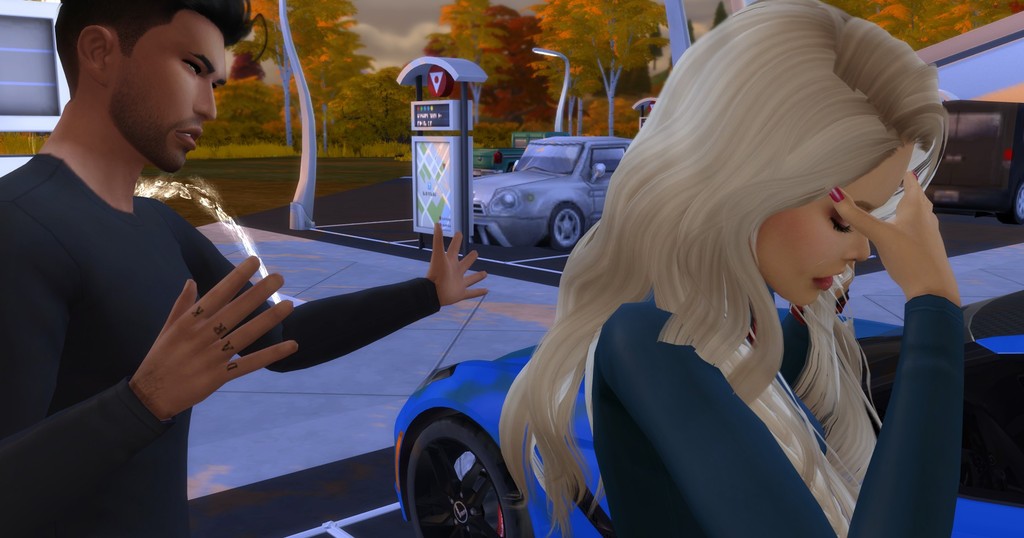 "I...well...it's complicated. I wanted to wait to talk to you about this in person. Some things changed when I went back and..."

I put my hand up, I couldn't hear anymore. "Just stop," my voice was hoarse with tears. "I can't do this." 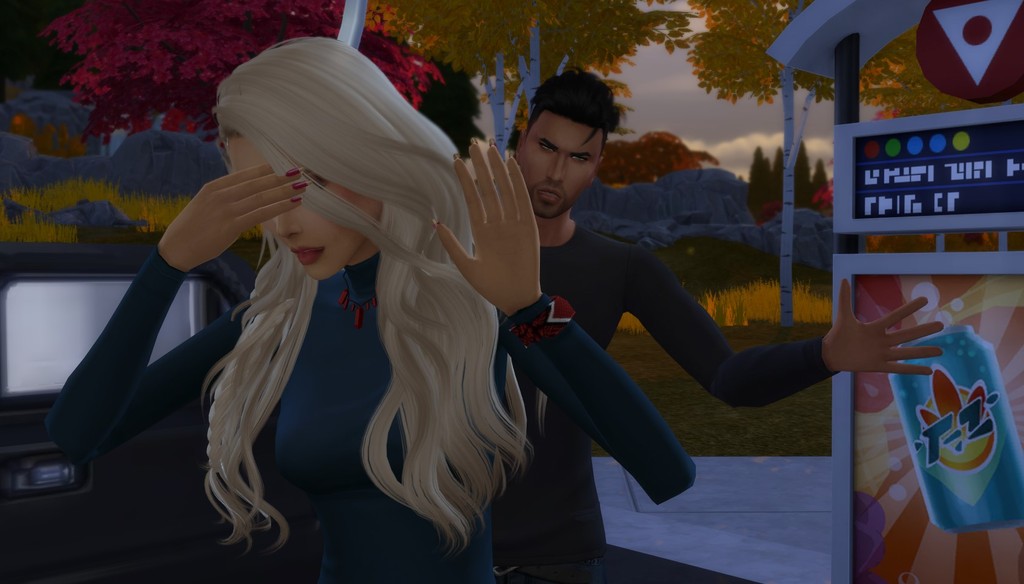 Throwing myself in my car, I rammed in the keys, revving the engine, then put it in reverse and squealed out of the parking lot.

​I cried the whole way home, barely able to make out the signs through the water in my eyes.

Stumbling into my apartment, I noticed Julien watching t.v. in the living room. I didn't want him to see me like this. 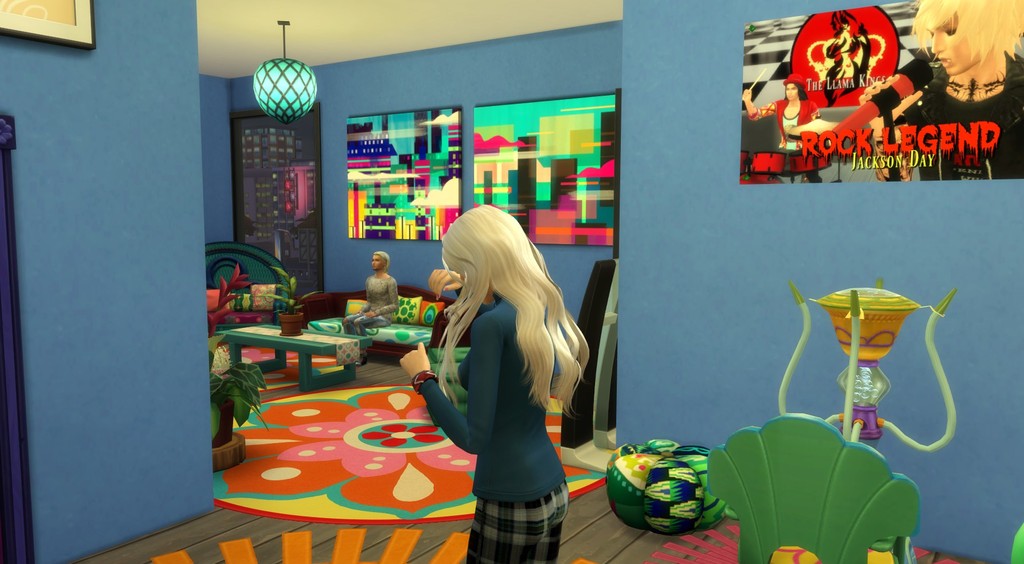 I tried to wipe my eyes, but I couldn't control my sobs.
​ 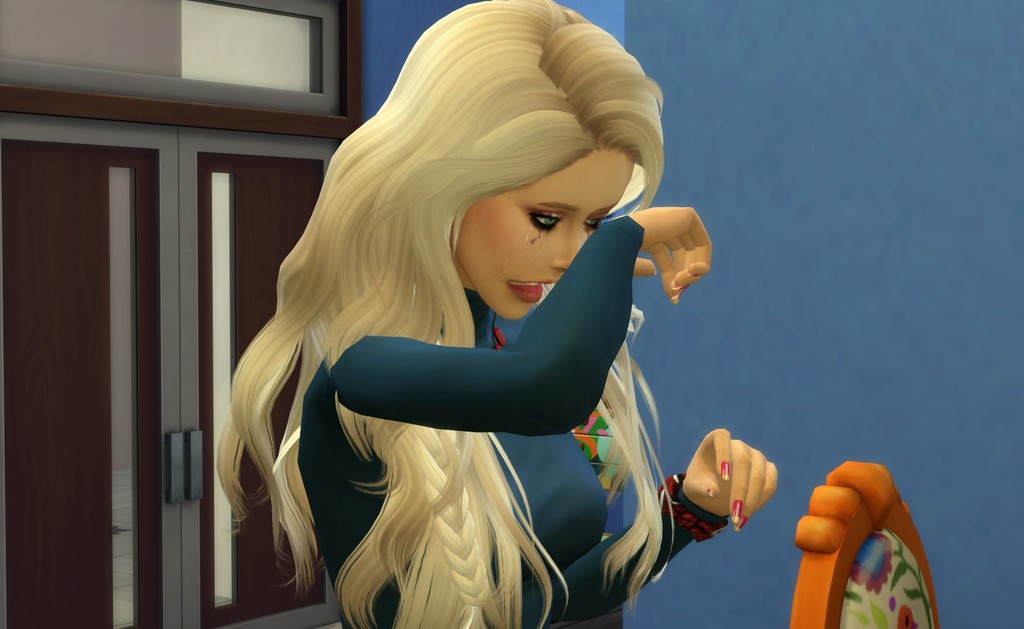 When I heard the door slam, I was shocked to see Shivvy in tears, mascara running down her face. Instantly, I jumped up, dashing to her side. "What is it, darling? What's wrong?" 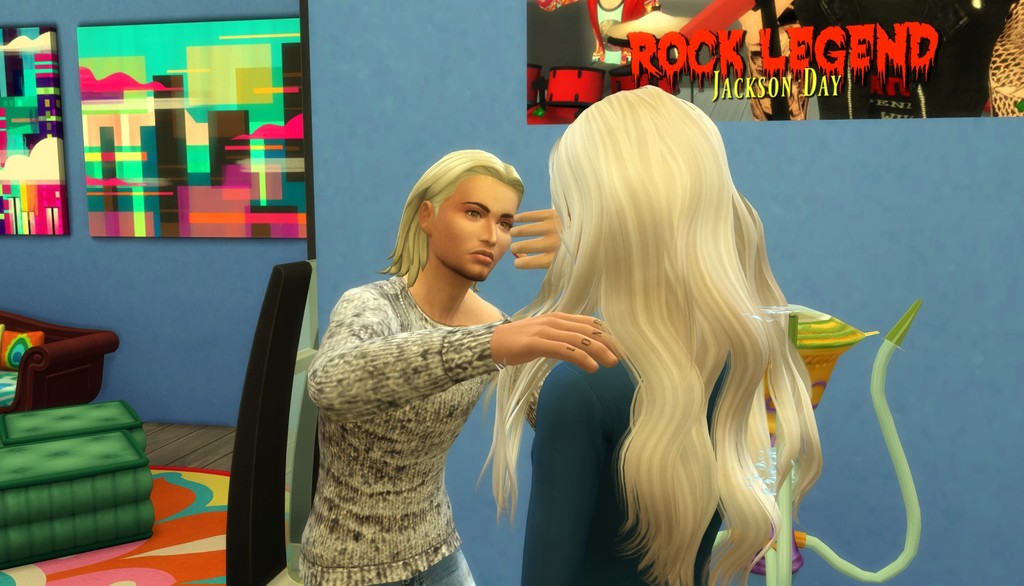 I could barely understand a word, she was going on so hard, but I put it together that she caught Seth bang to rights with his ex at the airport. What a bloody blighter.
​ 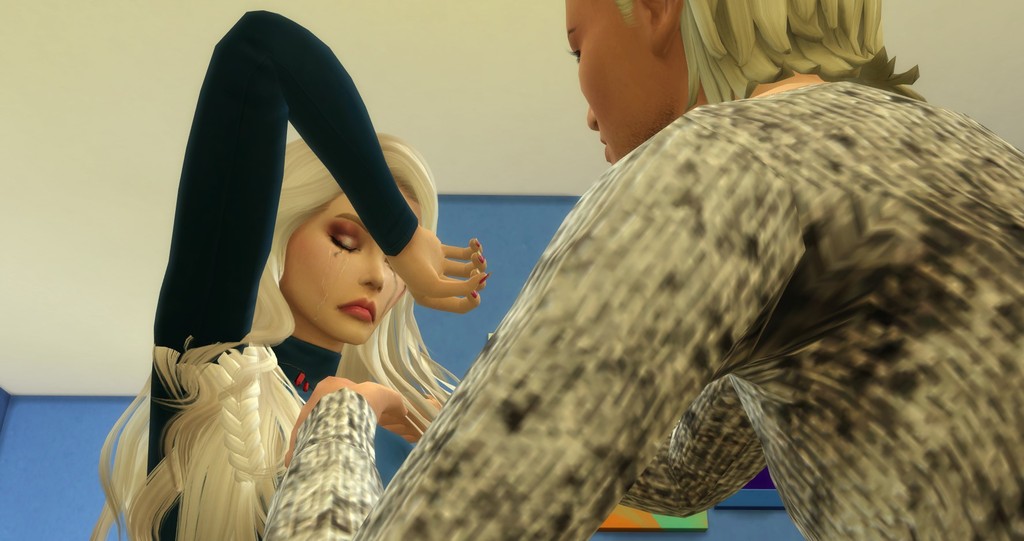 "Hush now, darling," I said, trying my best to console her. "He's not worth all that if he could do that to you."
​ 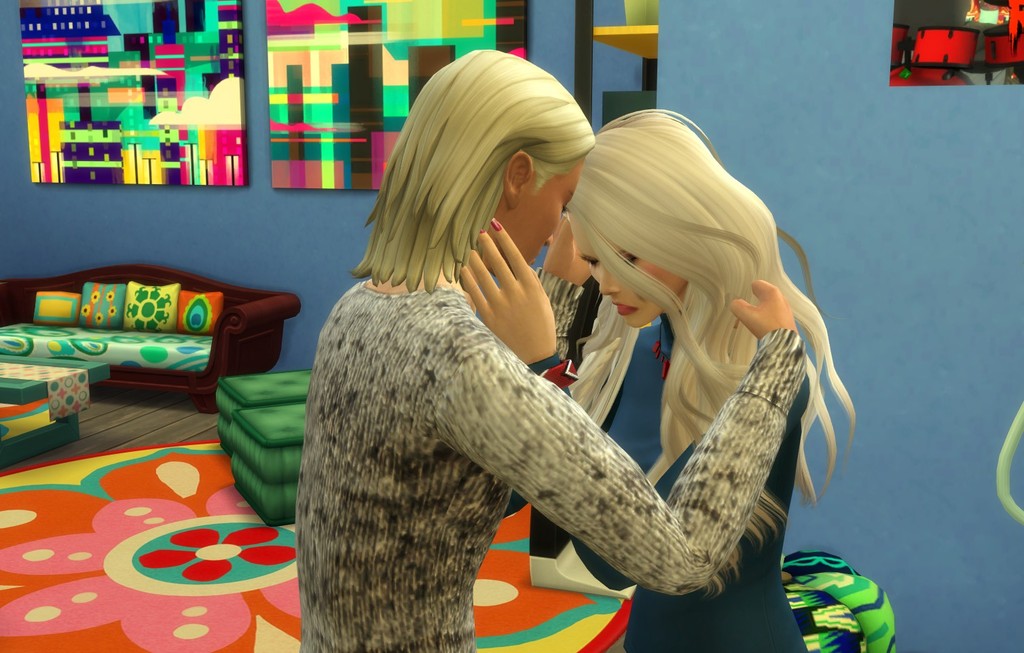 I hated seeing her like this. Shivvy did not bode well with pain, and I worried for her mental state. I was beyond glad to be there for her, although my own girlfriend wouldn't be keen on my knight in shining armor gig at the moment. But how could I abandon her right now? 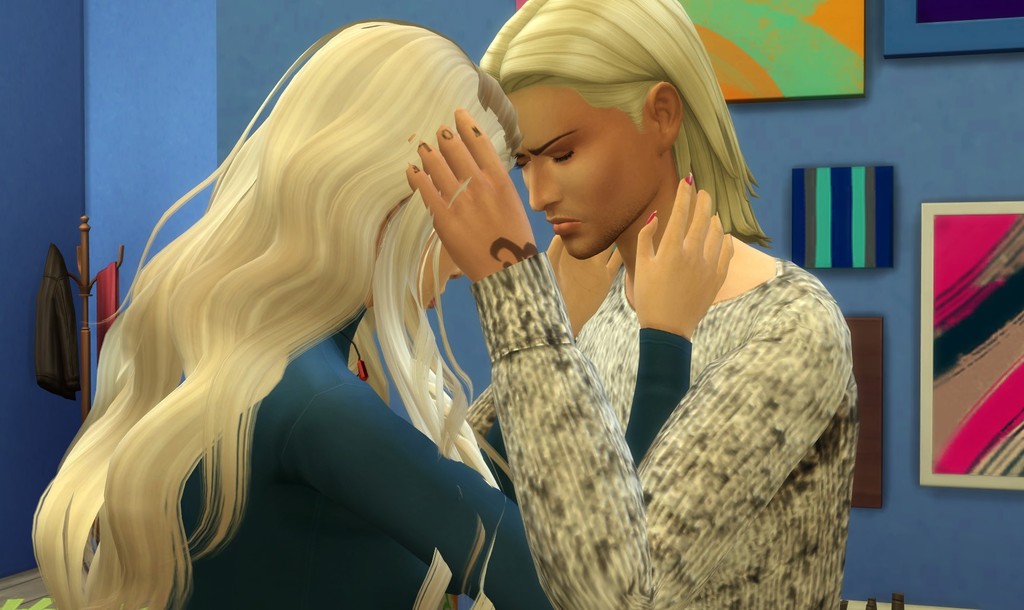 Just then, the man in question burst through the door. "Get the bloody fuck out of here!" I roared, ready to go to blows if I had to. He was not going to hurt her anymore. 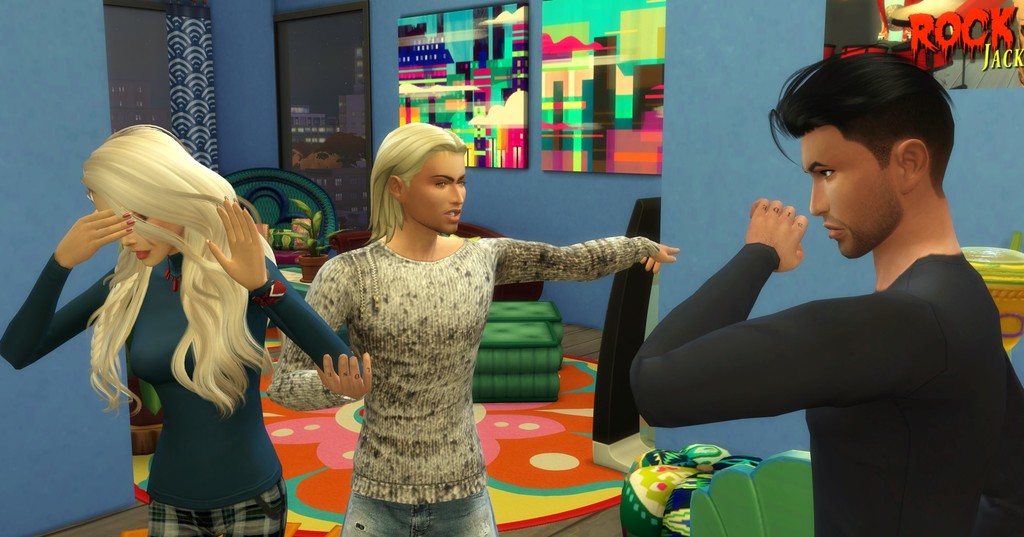 "I just want to..." he started but I wasn't about to let him finish.

Jabbing him with a left hook, my fist smacked the side of his jaw. 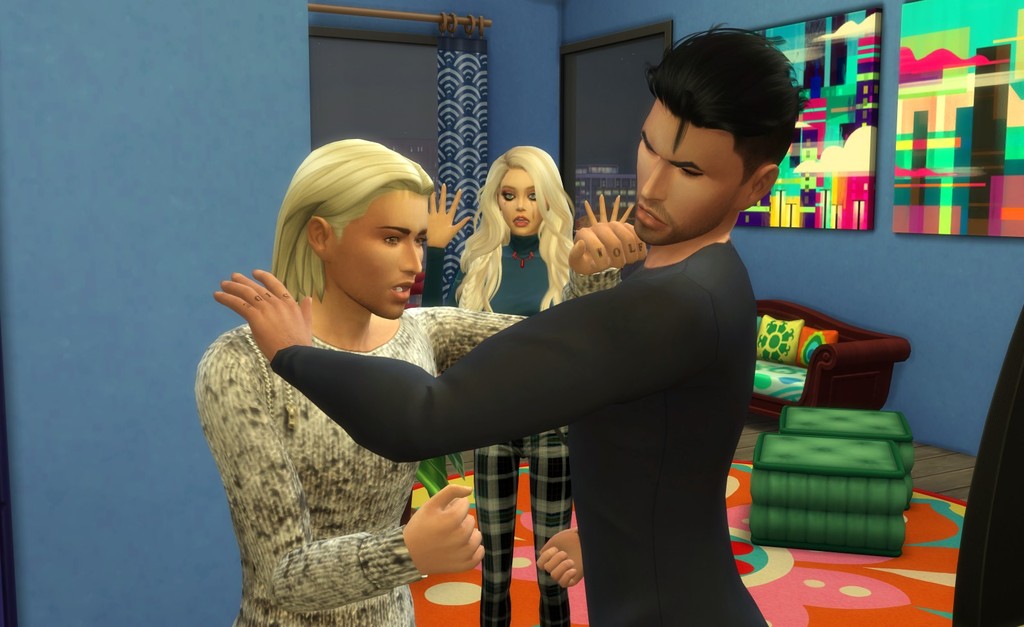 But he was such a huge bugger that it didn't phase him and he countered, hitting me painfully on the cheek. 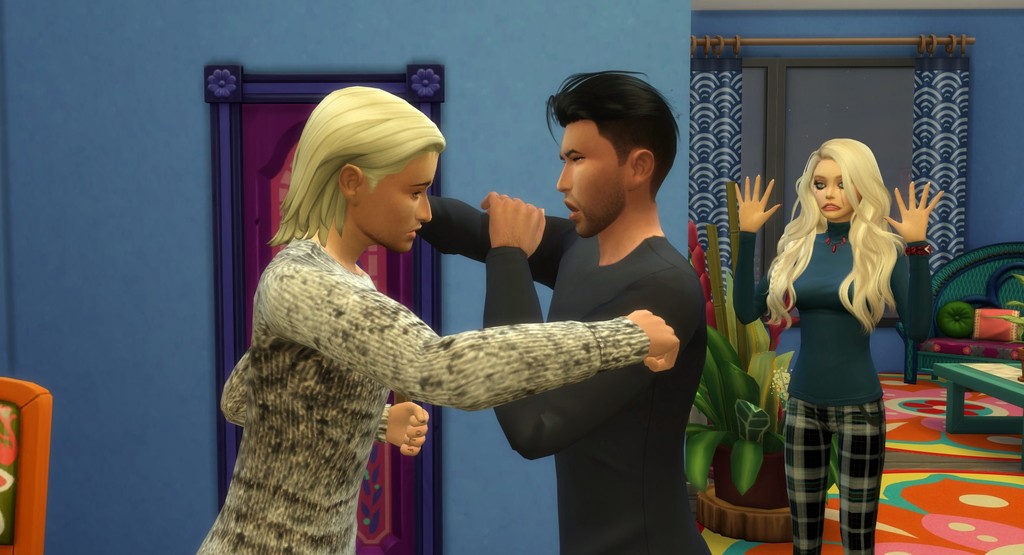 Sparks flew before my eyes as I fell to the ground with his massive fists raining blows on me. Pain pounded my face with my cheek and eye already throbbing. I tried as best I could to stave him off but he was such a behemoth. 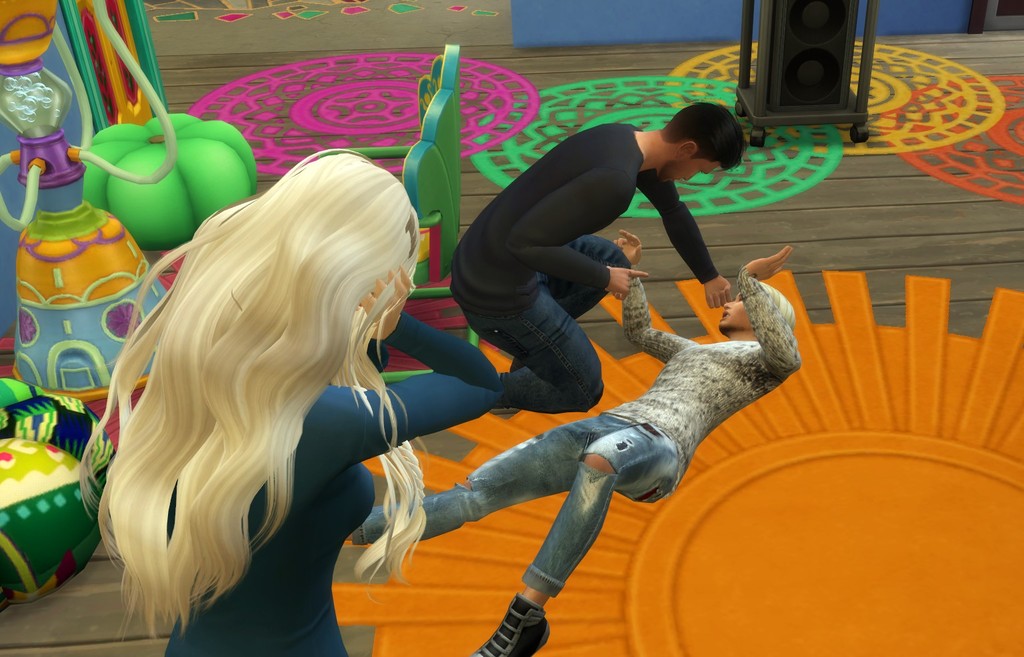 Panting, he raised himself to his feet as Shivvy pulled me upright.

I growled low and mean, trying to catch my breath, "Get the bloody hell out of here or I'll call the police."
​ 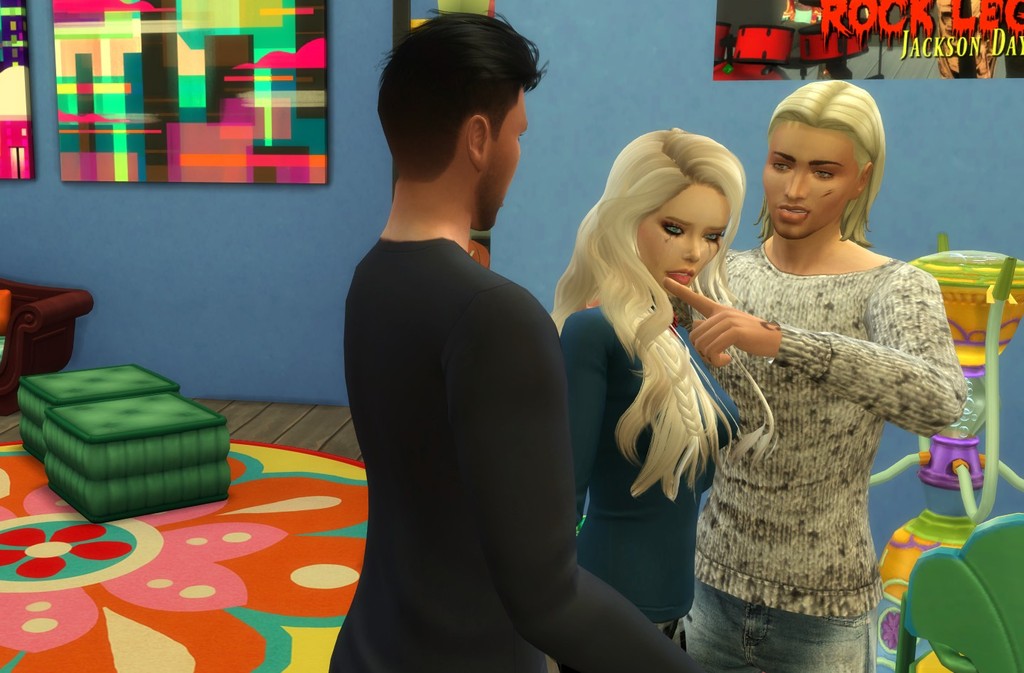 The git had no course but to do as we said. Hanging his head low, he turned away and muttered, defeated, "I'm sorry, Siobhan. I'm so sorry."

"She doesn't care," I retorted. I just wanted the bastard gone. 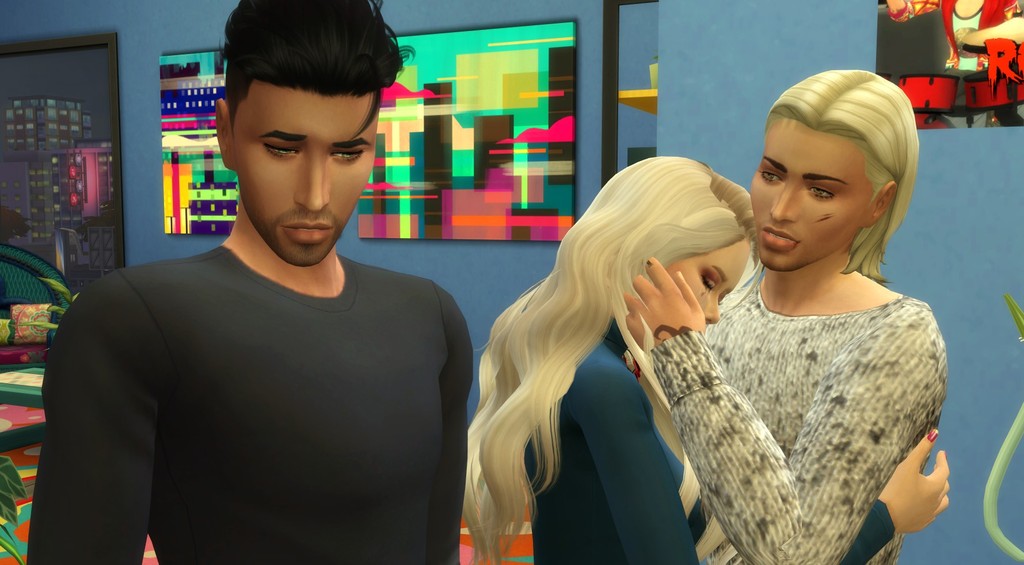 I held her as she cried, letting out all of her anguish. 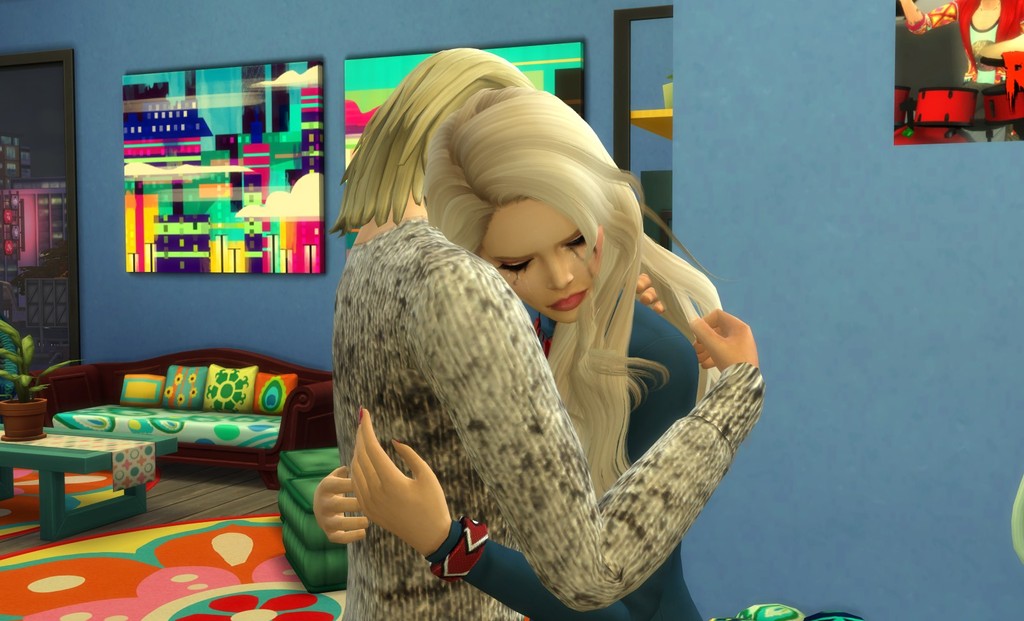 Special thanks to xjojox who made the fight scene poses especially for Julien and Seth (with the height differences, too!) Go check out all her poses! They are phenomenal! Joanne Bernice Poses