“You’re being unreasonable, Grayson. They’re our family friends. How can I not show up?”

I couldn’t believe Grayson was acting like this. Sure, I knew he didn’t want to be around Alex, but I couldn’t shun Benton and his family just because he’s marrying Alex’s sister.

Crossing his arms, he said, “You can go without me then. They’re not my family friends.”

“But you’re with me. We’re a couple. You really want me to see Alex alone? Because I will.”
​ 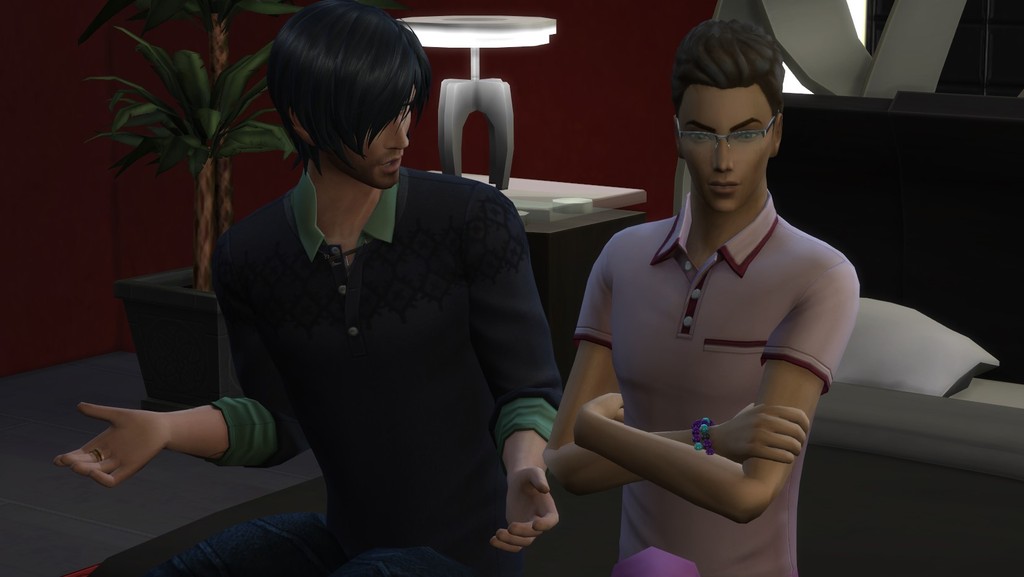 He pointed at me. “Don’t you dare threaten me, Knight. You know how I feel and you don’t care.”

“Because you’re not making sense! He’s got a boyfriend now, so why does it matter so fricking much to you? Why do you have to be jealous?”
​ 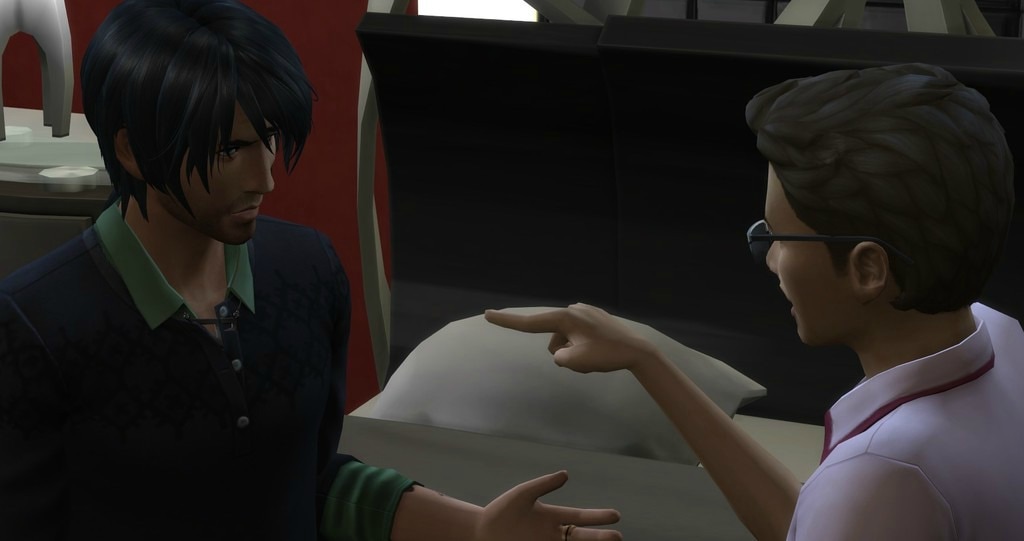 Flipping his head away from me, he said, “I’m not talking to you. Leave me alone.”

“God, stop acting like this! You don’t have to be around Alex, okay? We won’t even talk to him. I promise.”
​ 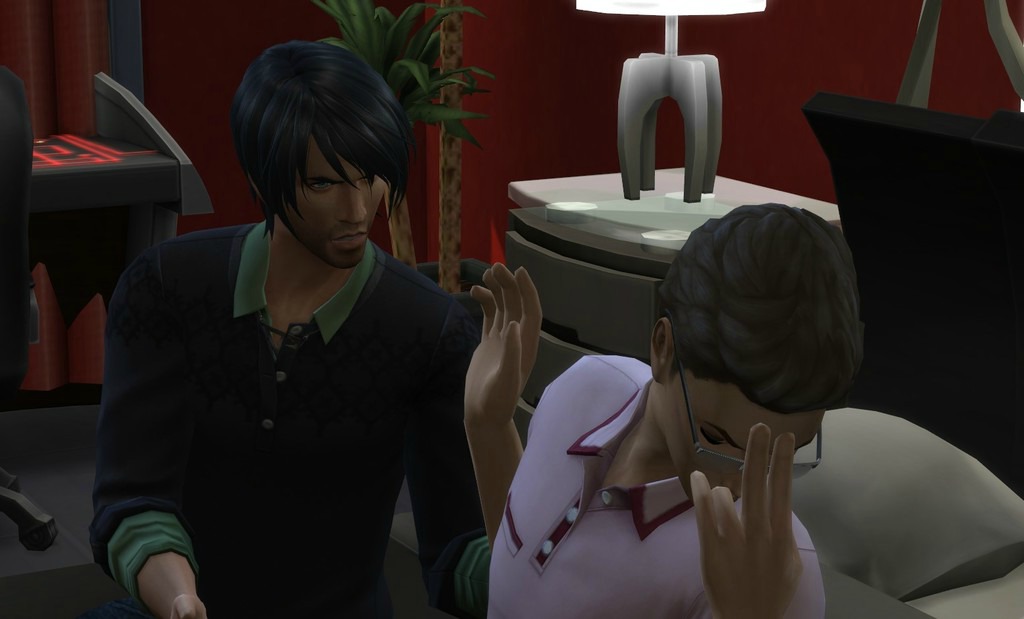 I felt like strangling him. I loved being around him except when he got jealous over Alex. Last time I’d had a hard time talking him out of his depression over Alex wanting to get back together. He’d made me tell him why Alex had been there. I wasn’t going to tell him details, but he needled me until I spilled the whole conversation. And I’d dreaded even asking him about this wedding, but I wanted to take him. There were people that were going to be there that I hadn’t seen in years and I wanted to show how happy I was. He just didn’t get it.

Leaning into his ear, I whispered, “You know I only care about you, right?” I kissed his neck. He resisted at first but then softened. Pulling him close to me on the bed, I wrapped my arms around him. “It’ll be fine. You’ll see. We’ll have fun.”
​ 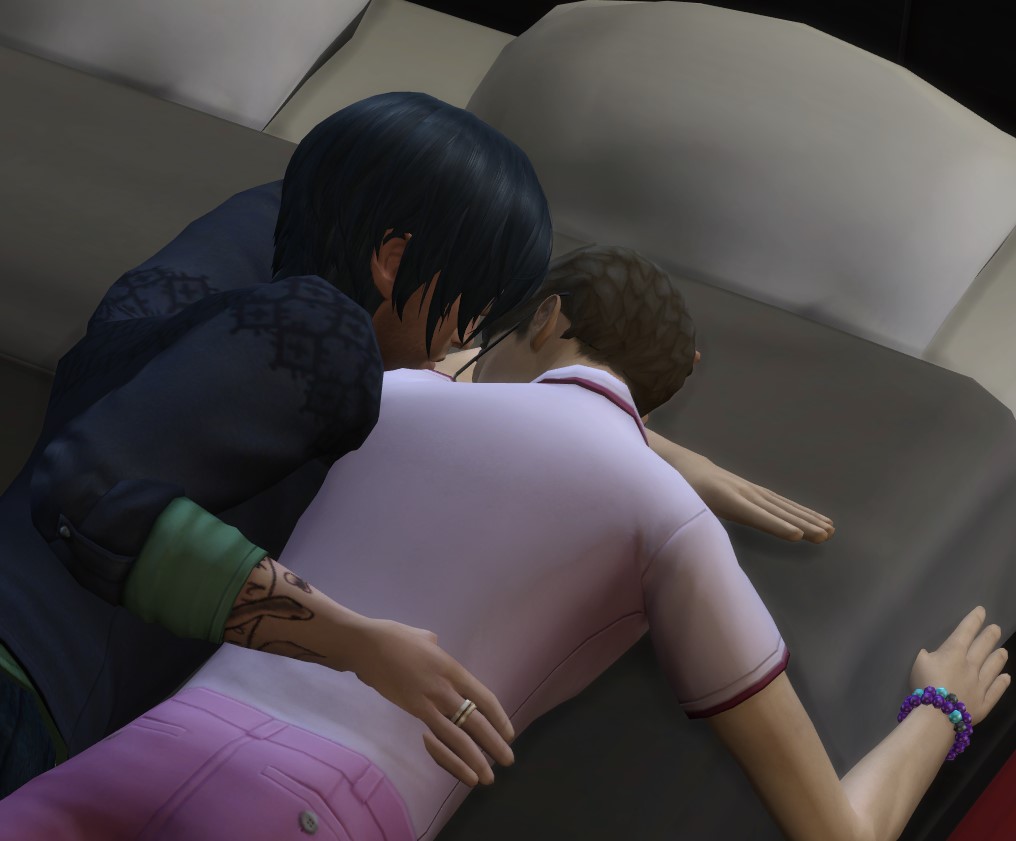 After all that fighting with Grayson, the wedding itself was a non-event. At least with Alex and Grayson.

Everything was standard wedding stuff. Brianna looked beautiful and Benton was beaming. I was really glad for them. They’d have a great marriage. It gave me a pang just thinking I should have already been married by now, but my life just never went that way. I still didn’t think I was ready. Grayson and I had a long way to go before I’d commit. Seeing some of his insecurities really made me uneasy at times.
​ 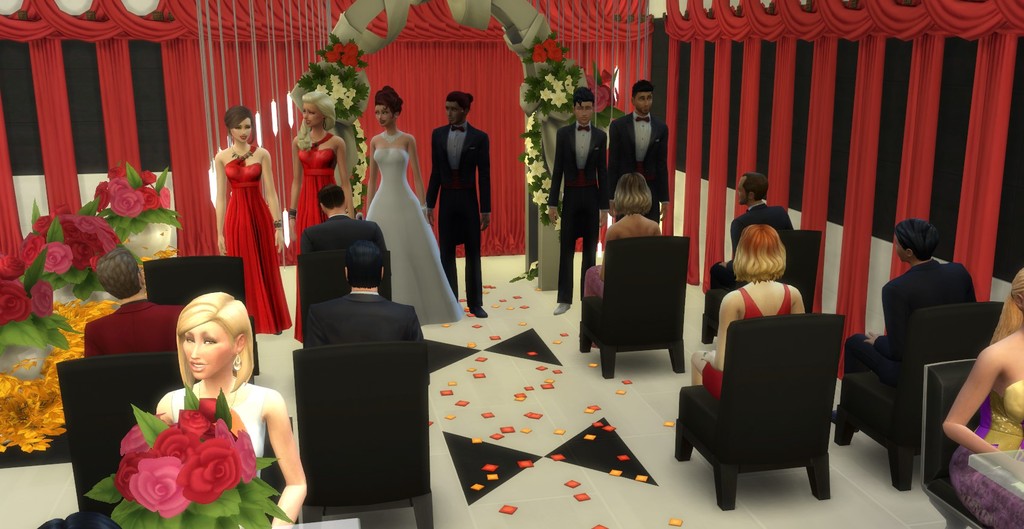 I steered Grayson away from Alex a few times, but I never saw his boyfriend. I had no clue who he was, although Jianna told me he had one and he would be there. I had to admit. I was curious as to whom Alex would date. But I certainly wasn’t going to go searching. Grayson would flip out on me.

I found Pops and Jianna sitting together at the reception. “You’re looking gorgeous tonight, Jianna!” I said. Pops really hit the jackpot with her. She was about fifteen years younger than him and seemed to only get prettier year after year.
​ 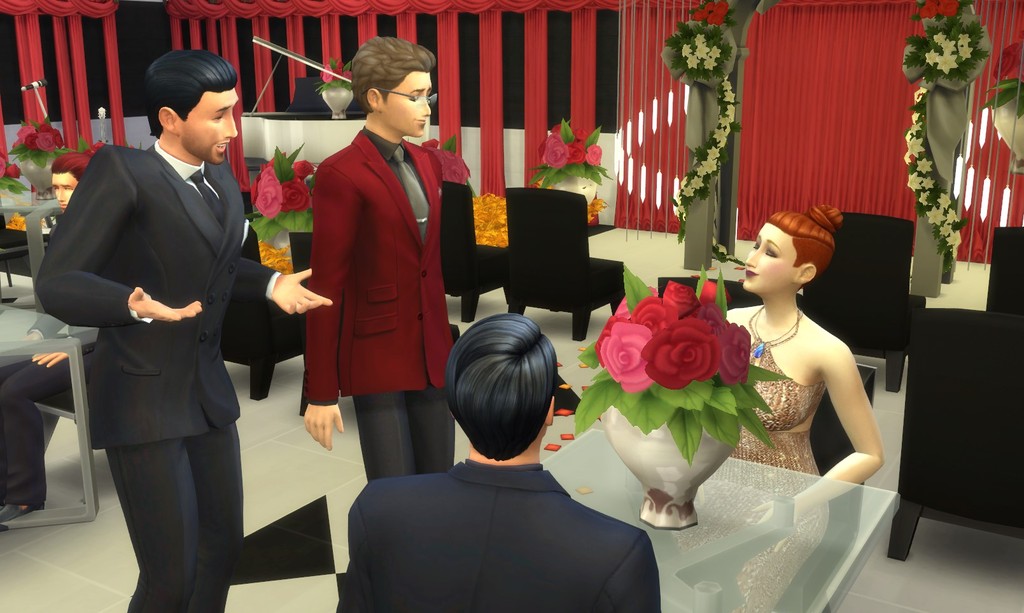 “She should look gorgeous. Haven’t you heard that pregnant women glow?”
​ 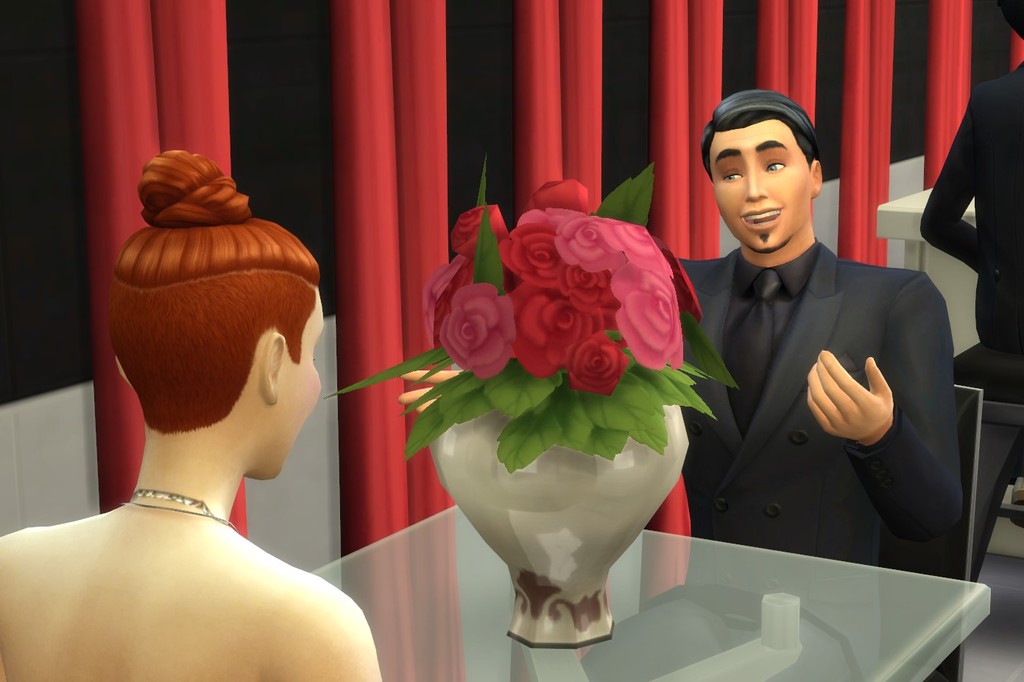 I hit Pops on the back. “You dog! You shouldn’t keep that kind of news from me! Congratulations!”

“I only found out myself,” Pops said. His smile couldn’t get any larger. That was the perks of having a young wife.

A little pang of jealousy poked me, but I ignored it. Pops’ was going to have a child even at his age--and I wasn't even close to having one. That threw me. This thought only made me miserable, so I went in search of the spiked punch. A buzz should put me in better spirits.

Pulling Grayson along, suddenly, we were face to face with Alex.

Seeing him still stirred something inside me. Alex looked too damned good in a tuxedo. Grayson tensed.

I didn’t say anything for fear Grayson might take it wrong. I was about to bolt when a guy flung his arm around Alex. “Dallas Flint,” I said, incredulously.

“Look what the cat dragged in. Knight Fucking Asshole Richardson. Alex, your taste in guys got infinitely better, thank God.” 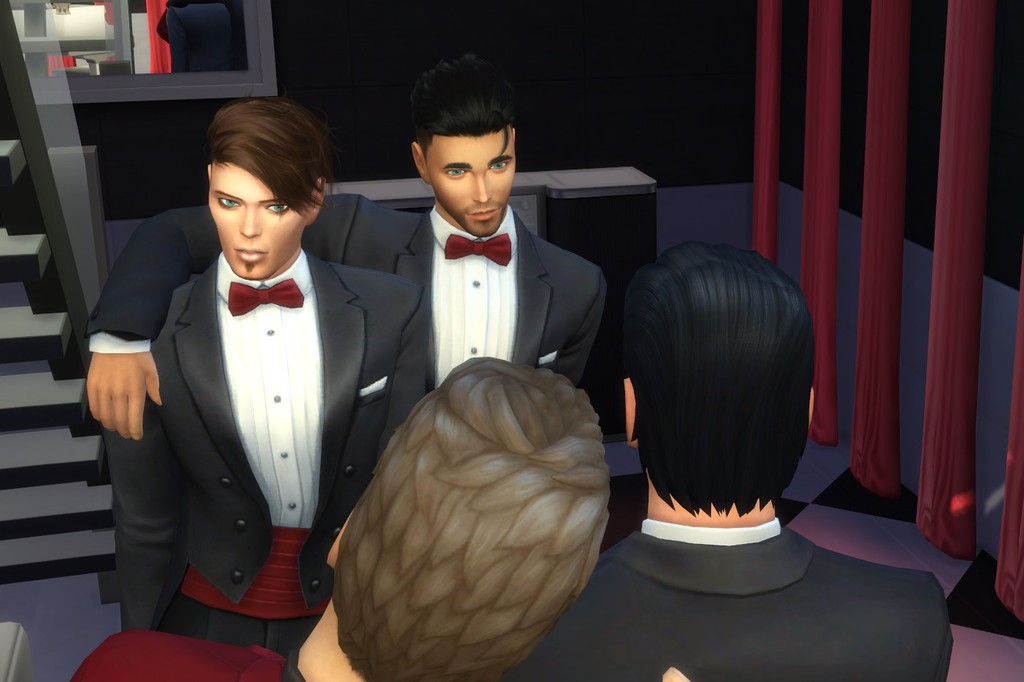 Before I could make a snide comment back, he pulled Alex with him, bumping me in the shoulder. I wanted to deck him, but wouldn’t do that at Ben’s wedding.

“That’s Alex’s boyfriend?” Grayson asked. “Funny...he sort of looks like you except he’s a total douche. How do you know him?” 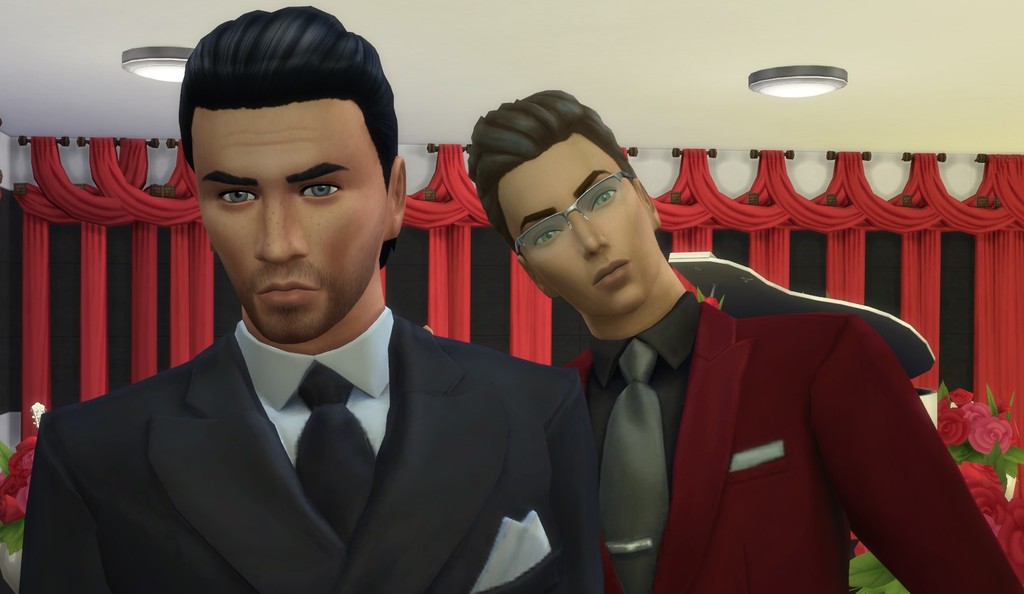 I wasn’t about to tell Grayson I’d gone out with his sister in college who’d cheated on me. And Dallas was just like her. When I knew him, he was already out and went from guy to guy. We’d got into a fight one night because he was punching the hell out of one of his many boyfriends at the time. “My God,” I whispered. “What the fuck is Alex doing with him?” 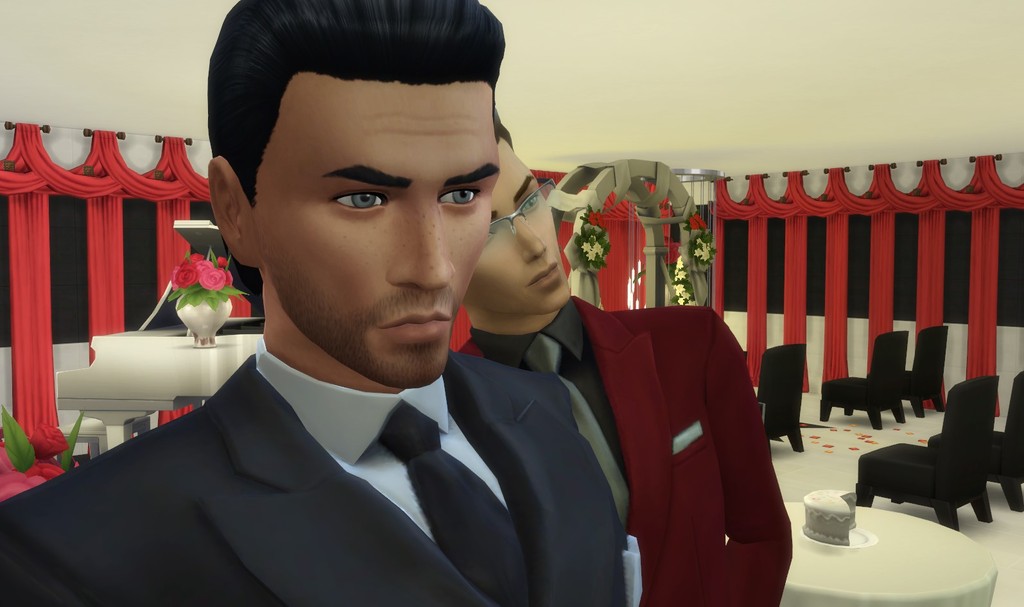 The wedding was a whirlwind event. I was so proud walking Bri down the aisle, so wishing Dad could have been there. Ben would be a great husband for Bri. I was really stoked about the whole thing.

I loved seeing how happy they were at the reception. Too bad it was over in the blink of an eye.
​ 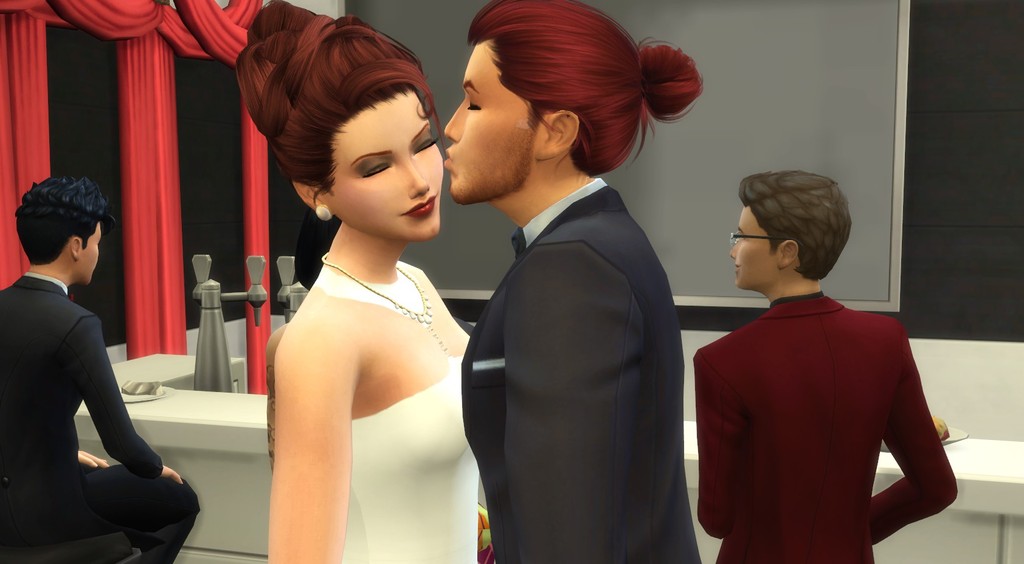 And seeing Knight there with his boyfriend only made me mad. I couldn’t stand Grayson. He was such a wimp. How could Knight be attracted to him? And when we came upon them, I was happy to have Dallas tell Knight off. I mean, Knight cheated on his sister. I knew that happened when Knight wasn’t that good of a guy. Even he’d admit that, but still. I couldn’t blame Dallas one bit for calling him out. And he didn’t escalate it. He just ushered me away from them. He’s such a thoughtful boyfriend. I was so happy being with him.
​ 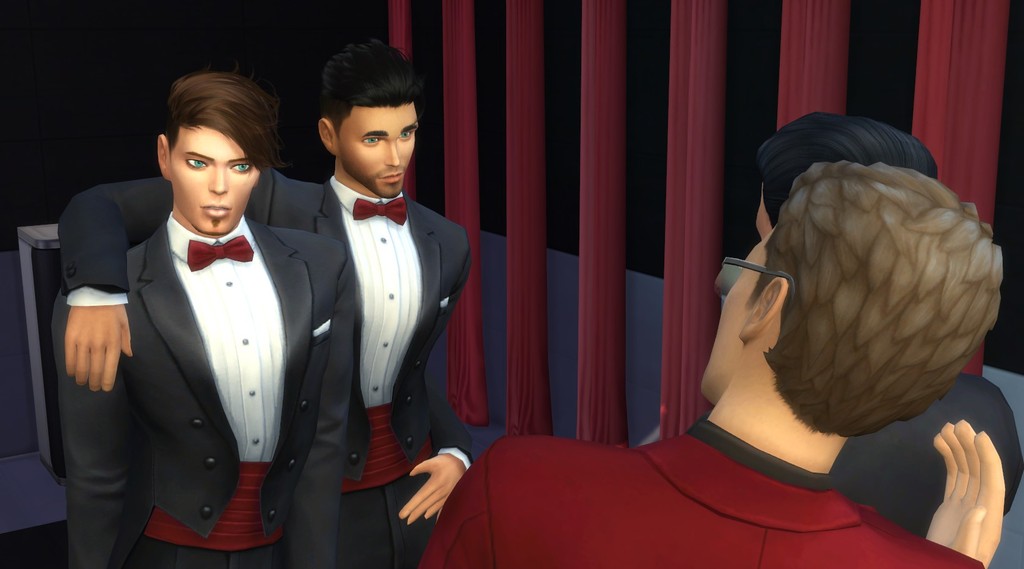 The next day, Dallas came over. We were about to go motorcycle riding together. I found him looking at Chiandra’s picture and he grew angry. “I really wish I didn’t have to look at her face whenever I come over, Alex. Why do you have them everywhere?”

“Technically, this place will be hers once I get enough money to buy a place. That’s why I let her decorate how she wanted.”
​ 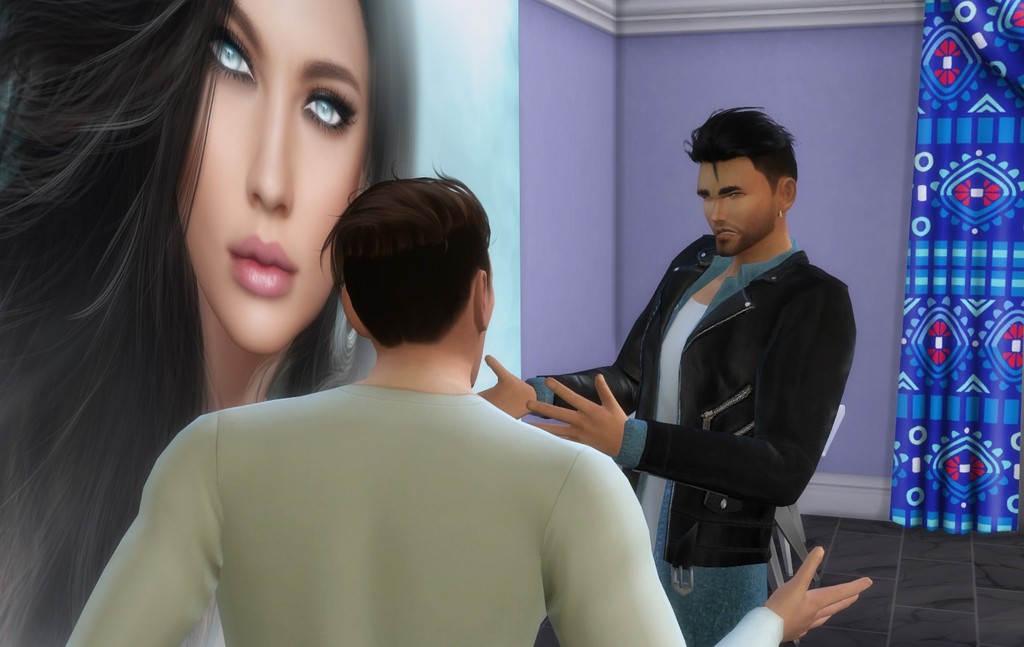 “And how long until you have enough to leave? It’s hard to be here. Sorry. Don’t want to be mean, but yeah, I’m kind of over her staring at us.”

I couldn’t help but laugh. He made a great point. “Um, well, you know San Myshuno is crazy expensive. My novel is up for an option at Simamount so it could get a movie deal. If that happens, I’m set and I’ll move then.”

A mischievous gleam sparkled in his eye. “Why don’t you move in with me? I live out a bit right now, but I’m about to buy a penthouse at Torendi Tower. You could help me decorate it.”
​ 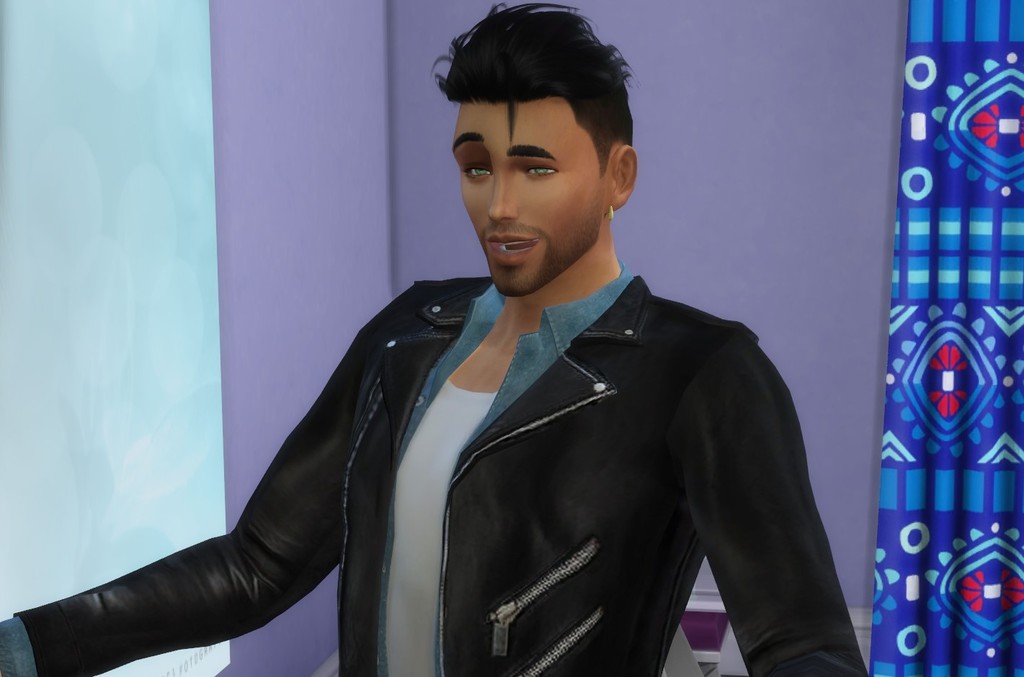 Wow. Things were moving at light speed with us, but I was all for it. Dallas was my fit. We liked to do the same things, we laughed all the time, and he even liked to spar with me at the gym, something I loved to do. And with each passing day, I fell more and more in love with him.

“You really mean that, Dallas? You don’t think it’s too soon?”
​ 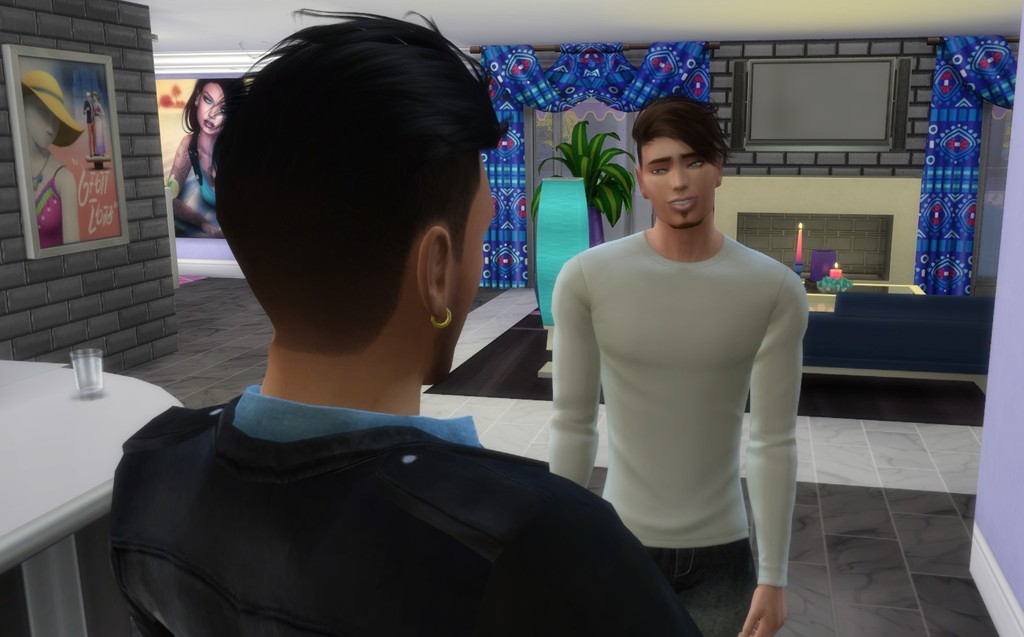 He took my hand and said, “Babe, I’m serious. Come here.” Leading me to the couch, we sat together. “Look, I’ve never felt like this about anyone before. And you’ll like the place I’m in now. It’s a little ways out from the city but why would you care? You can do your writing anywhere. And it’s only a taxi ride back to meet with your agent or publisher. I think you’ll like it better. It’s way quieter than this place.”

It sounded great. Why shouldn’t we move in together? It was the next step.
​ 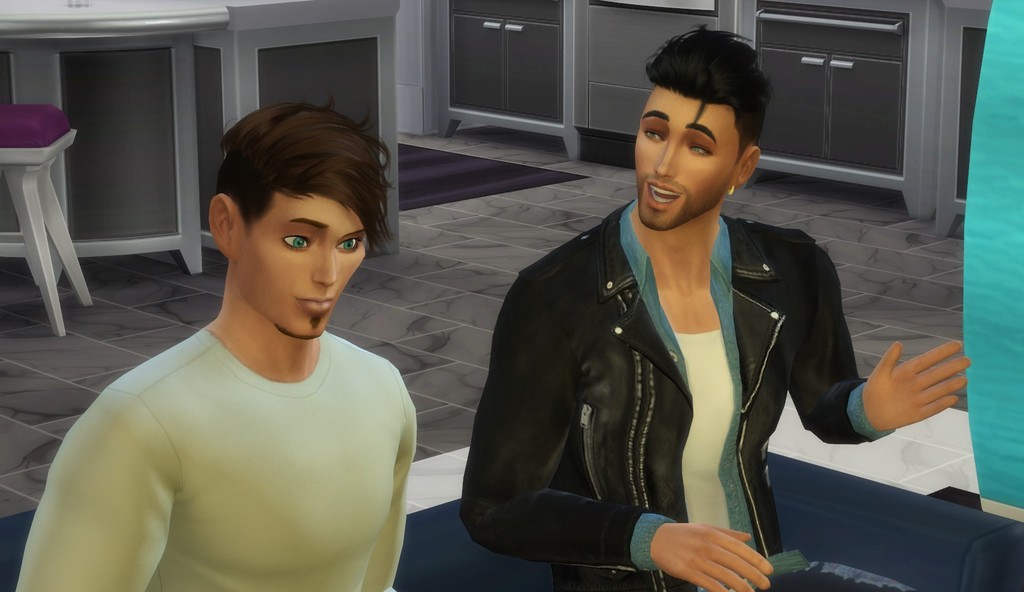 I was about to answer when he started tickling me. “Say yes or you’ll be sorry, Alex,” he sang.

“Or what will you do?” I said, cringing because I knew he was going to tickle me. I hated being ticklish.
​ 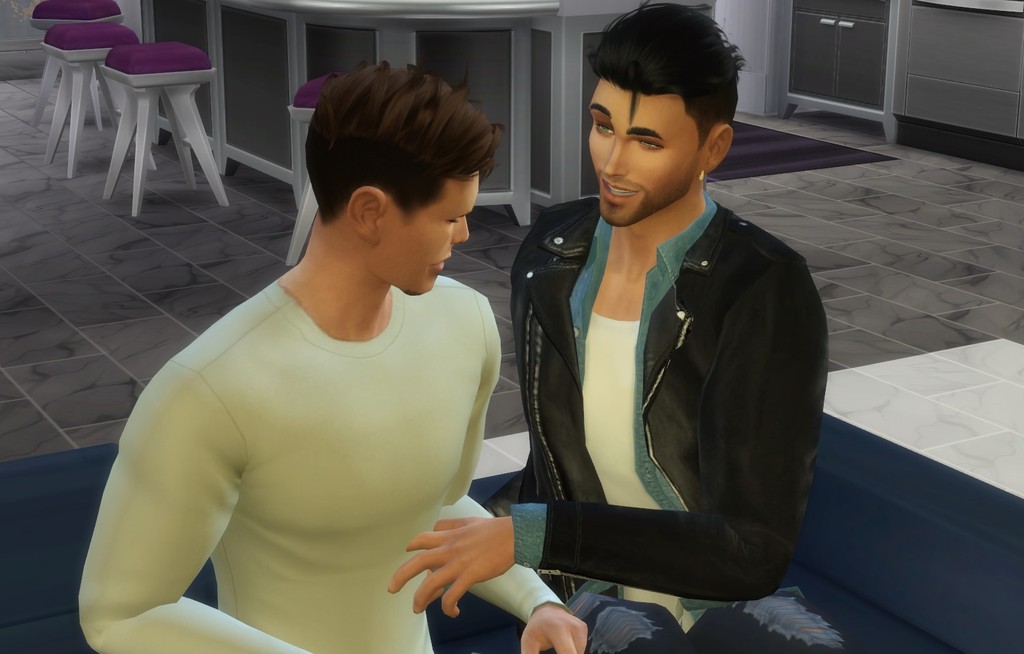 “I will have you under my spell...now!” Digging his fingers into my stomach, I howled, trying to make him stop.
​ 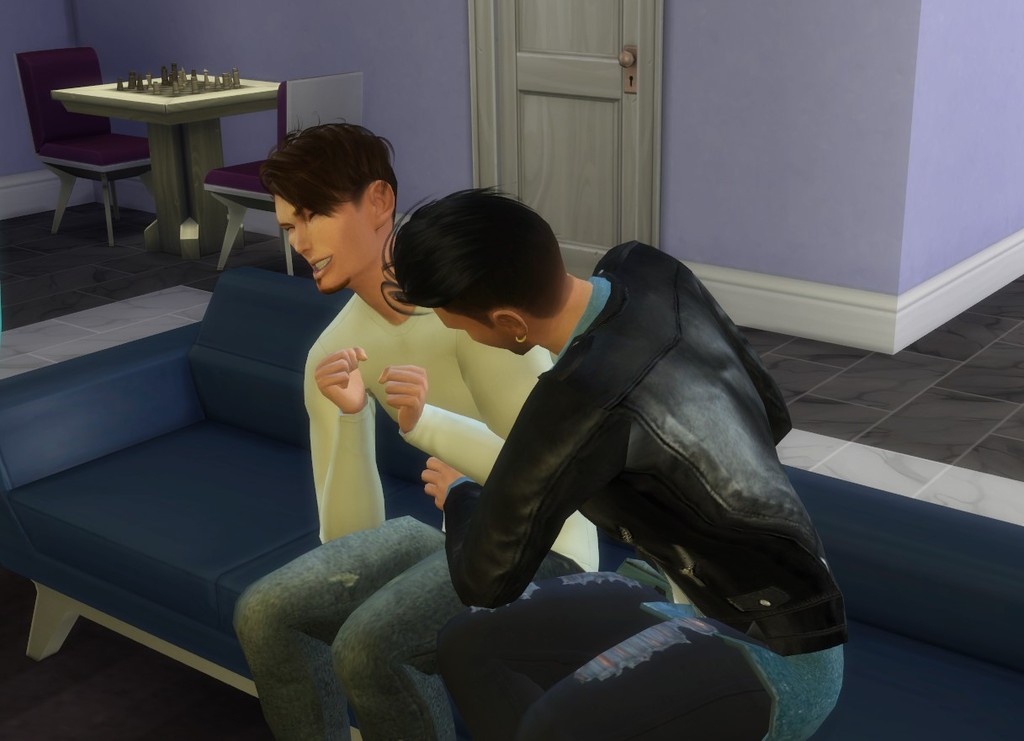 “Okay, okay! I’ll move! Just stop it already!” I clamped down on his wrist, forcing his hand away.
​ 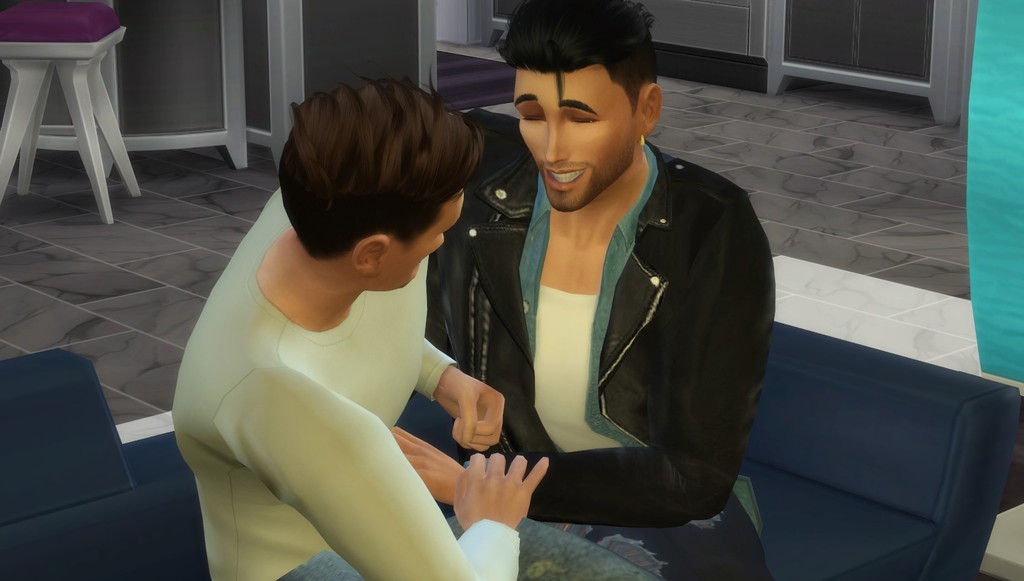 He pulled back and asked, tenderly, “You will, babe?”

Looking into his gorgeous green eyes, I said, “Yes.”​
​ 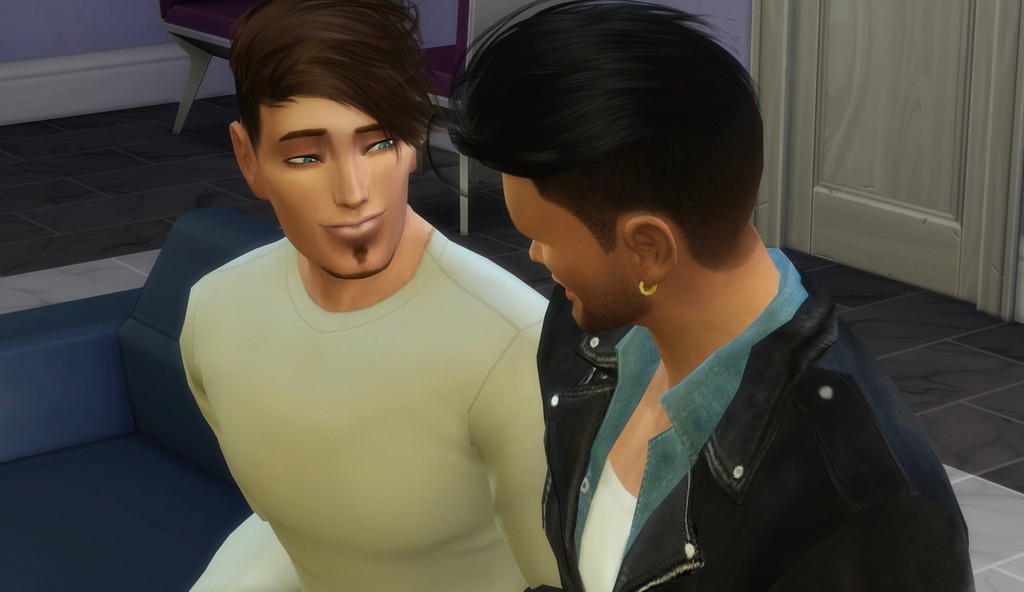 He leaned toward me, giving me a sweet, soft kiss.
​ 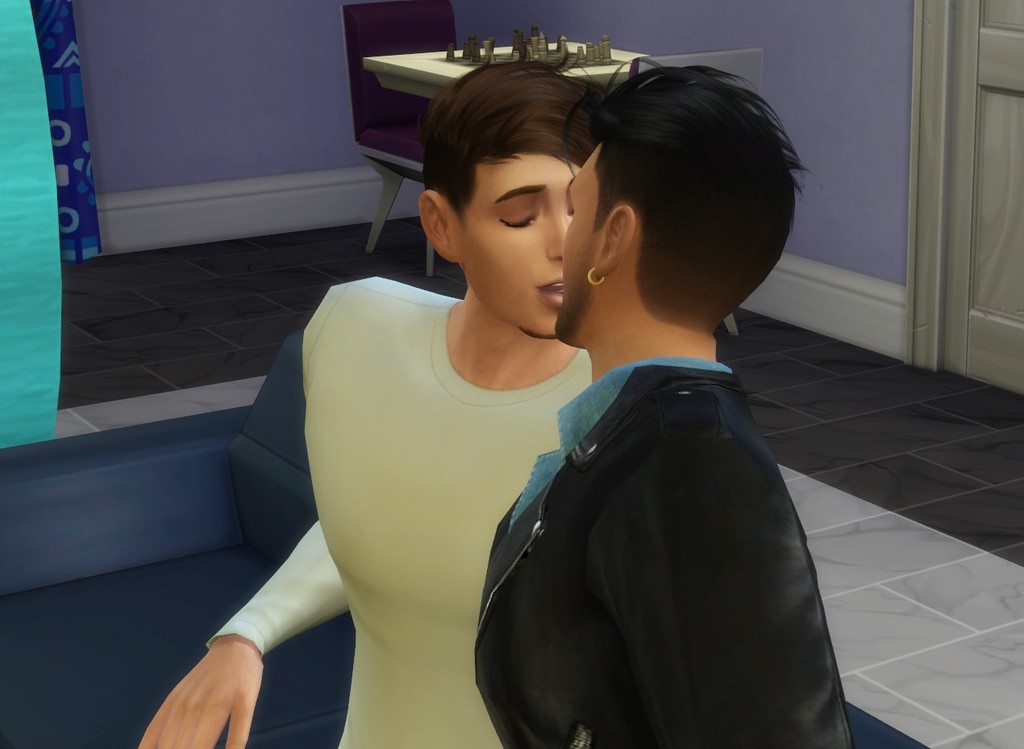