As we strolled down the street to the movie theater, I tried not to make eye contact with Chiandra. First of all, she was ridiculously gorgeous, but second of all, I didn’t feel comfortable. At all. I’d never been on a date with a woman. And the only reason I was here with her now was to get back at Knight. But he didn’t care. I decided to end the date right there.
​

Suddenly, I heard Chiandra say, “Oh, crap. What the hell is he doing here?”

Glancing over to where she looked, my muscles tensed.
​ 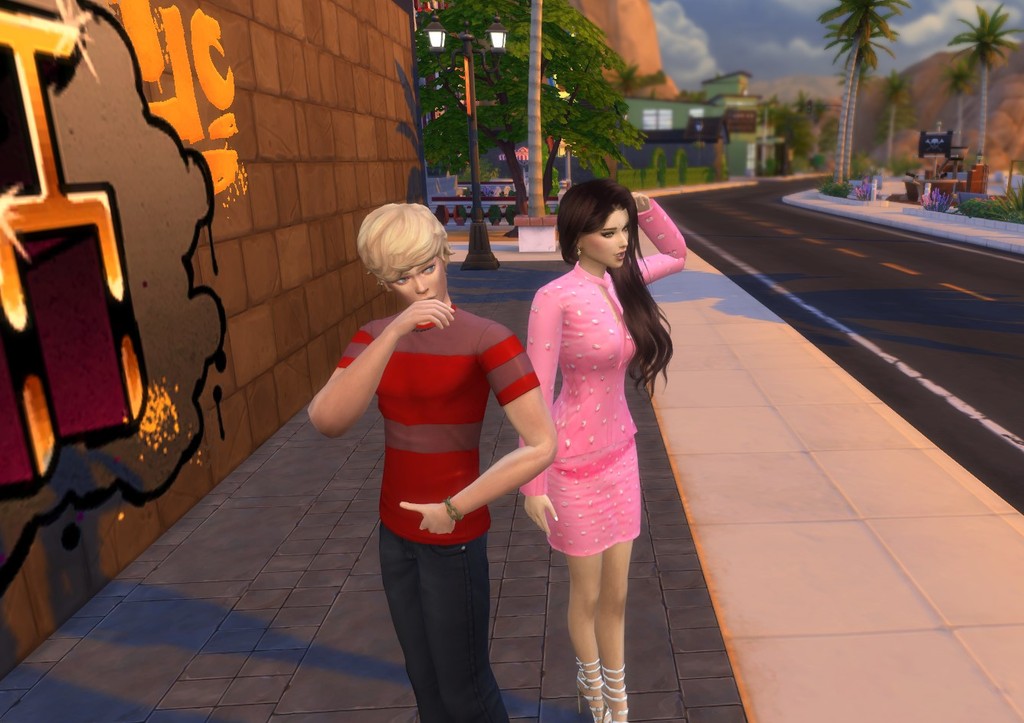 About 50 yards away, Knight stopped in the middle of the street, watching us.
​ 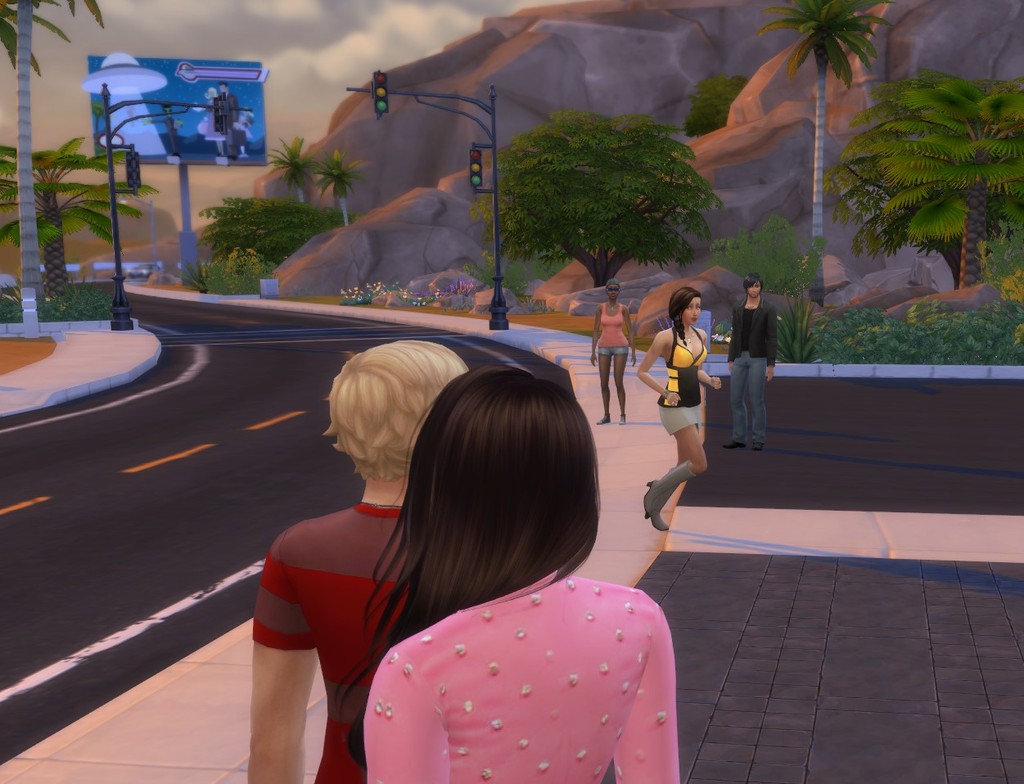 His eyes locked on mine, making me feel like I’d just got caught cheating. But why should I feel that way? We had one date and it didn’t end well. I was allowed to go out with whomever I wanted.
​ 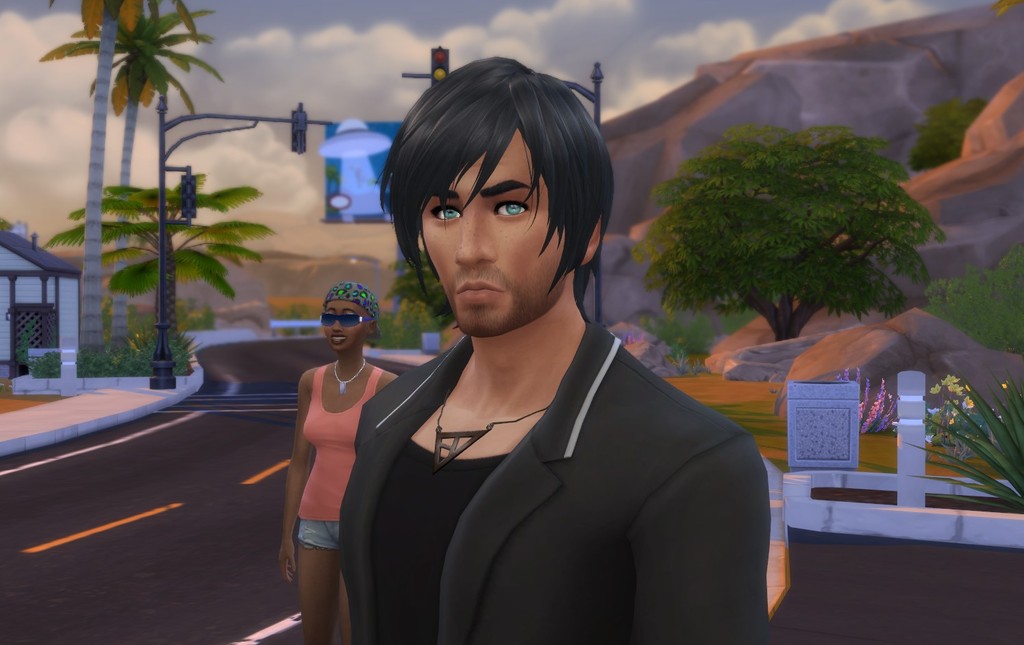 “Come on, Alex,” Chiandra said, pulling my arm. “Don’t give that asshole the time of day. Let’s go.” 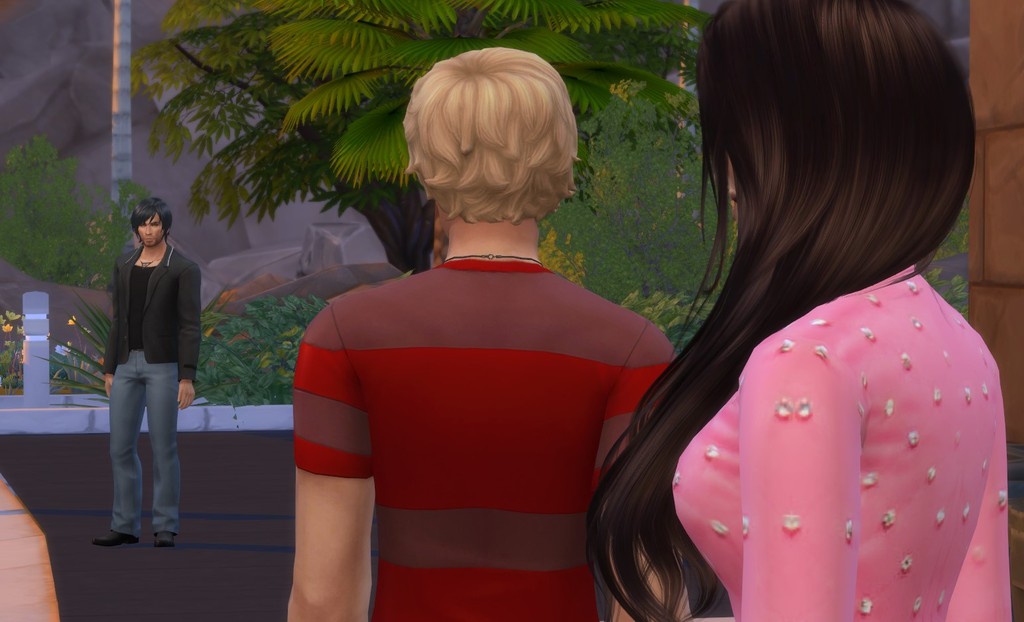 Marching over to me, Knight dragged me away from Chiandra. “What the hell, Alex? Why did you walk out on our date last night? And now you’re here with Chiandra?” 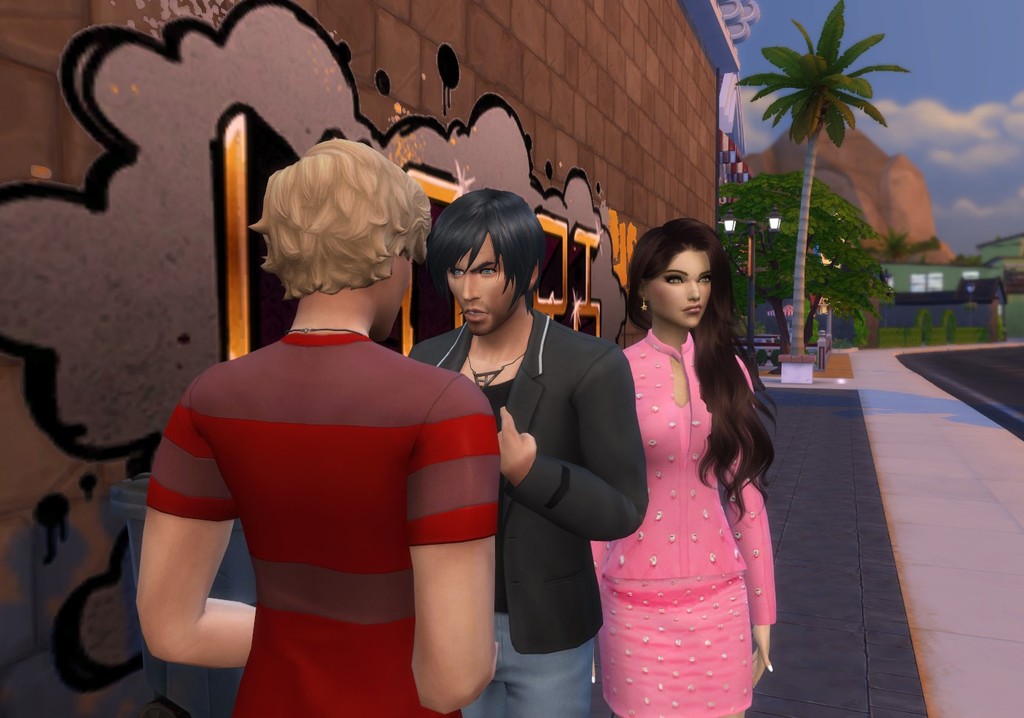 I could tell from his face he was hurt. Maybe I’d made a huge mistake. “I-I thought you were playing me. It looked that way with Chiandra staring at us.”

Knight squeezed my arm. “You’re so wrong. I wanted to kiss you. I had no idea Chiandra was even there. Why can’t you believe that?”

Sincerity was written all over his face. I felt like such an idiot. “I-I’m sorry.”
​ 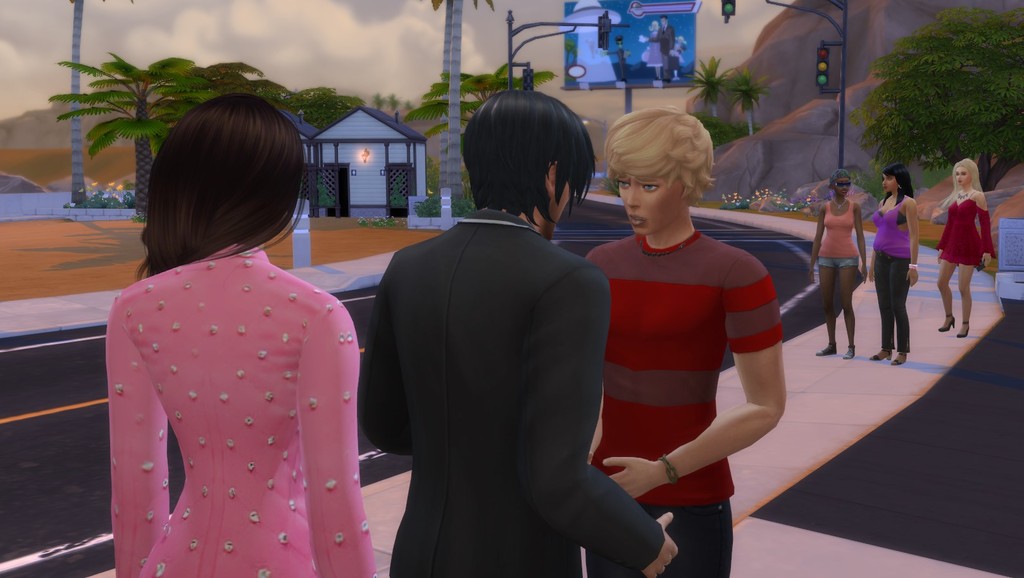 “You can make it up to me tonight.” Putting his arm around me, he started to walk away.

“Wait, you asshole,” Chiandra cried. “What do you think you’re doing with my date?”

“He’s my boyfriend, Chiandra,” Knight said, not looking at her. “Leave Alex alone.”

Shocked, I looked away, not knowing what to do, but happy to hear what Knight had said. I’d been called someone’s boyfriend a lot lately, but this time, I liked it.
​ 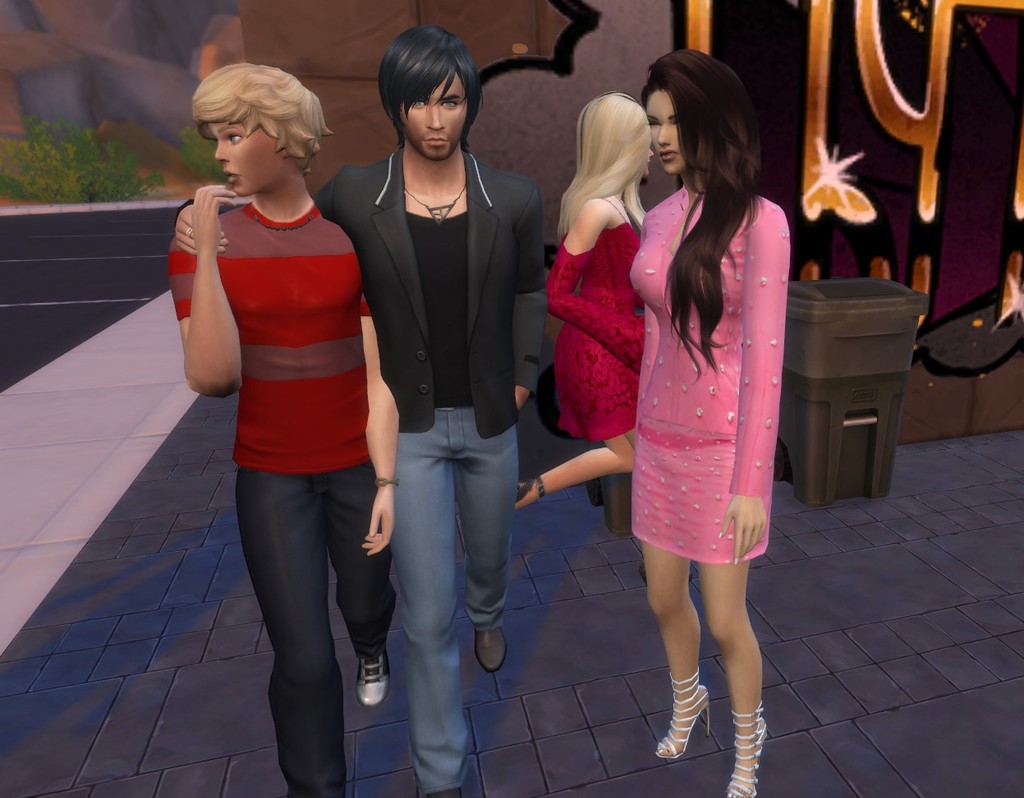 I’d wrestled with my feelings for Alex all day, and I came to one conclusion. I didn’t care if he was a guy.

I needed to be with him.

When he wasn’t at his garage, his sister told me he was out with Chiandra. I couldn’t believe that skank tried to steal him from me. But I knew what she didn’t. He wasn’t like me. He didn’t like women so I figured if I found him, I might be able to get him back. And thankfully, he wasn’t too mad at me.

“Do you want to walk around here? I’ve always liked this place.” I stared into Alex’s blue eyes, melting into them. When I was with him it was like we were the only people around. 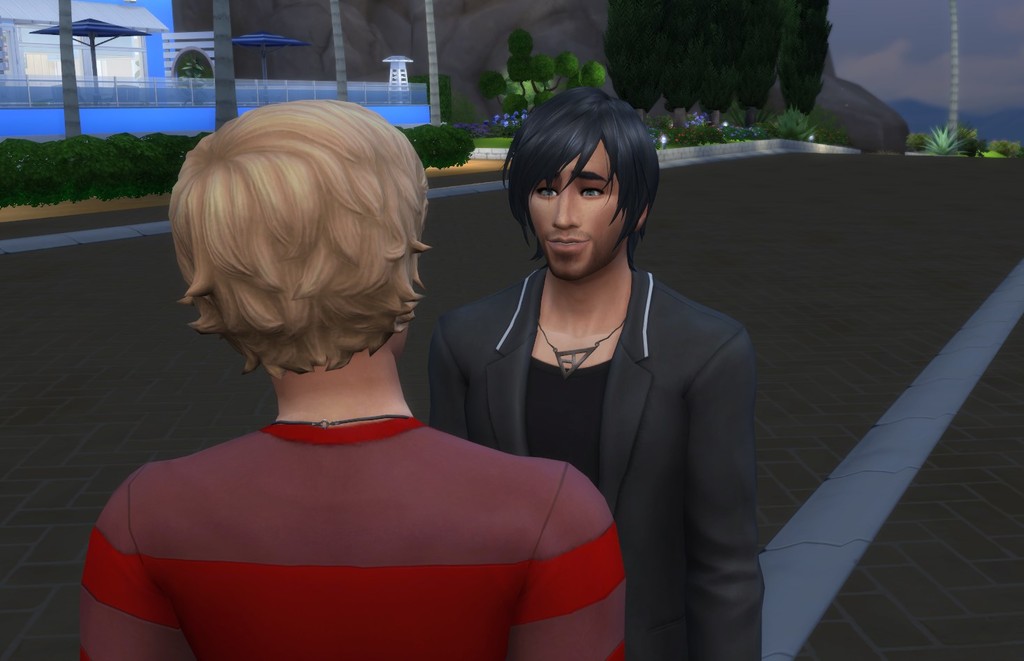 “Are you sure you don’t want to go to the skate park? My garage is down the street and I could pick up my board. I’ve got an extra one, too.”

Was he kidding? It was a full moon and this park was for lovers. I laughed. He was so shy now. I didn’t get it, but I thought I’d tease him.
​ 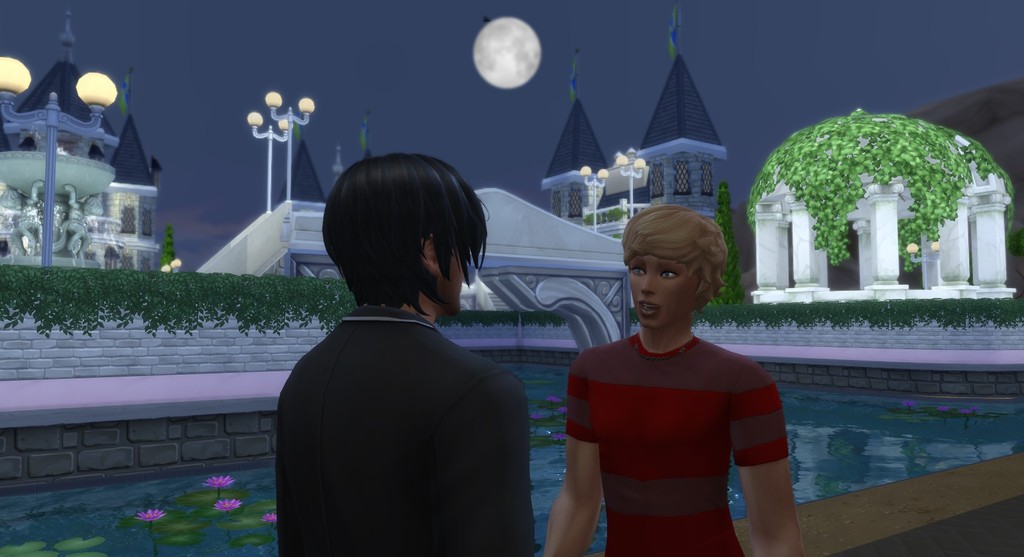 ​Grabbing him hard, I went in for a kiss, but he pulled back from me. He was so strong. I liked that. Dating a man was so different. “What?” I asked. “You don’t want me to kiss you?”
​ 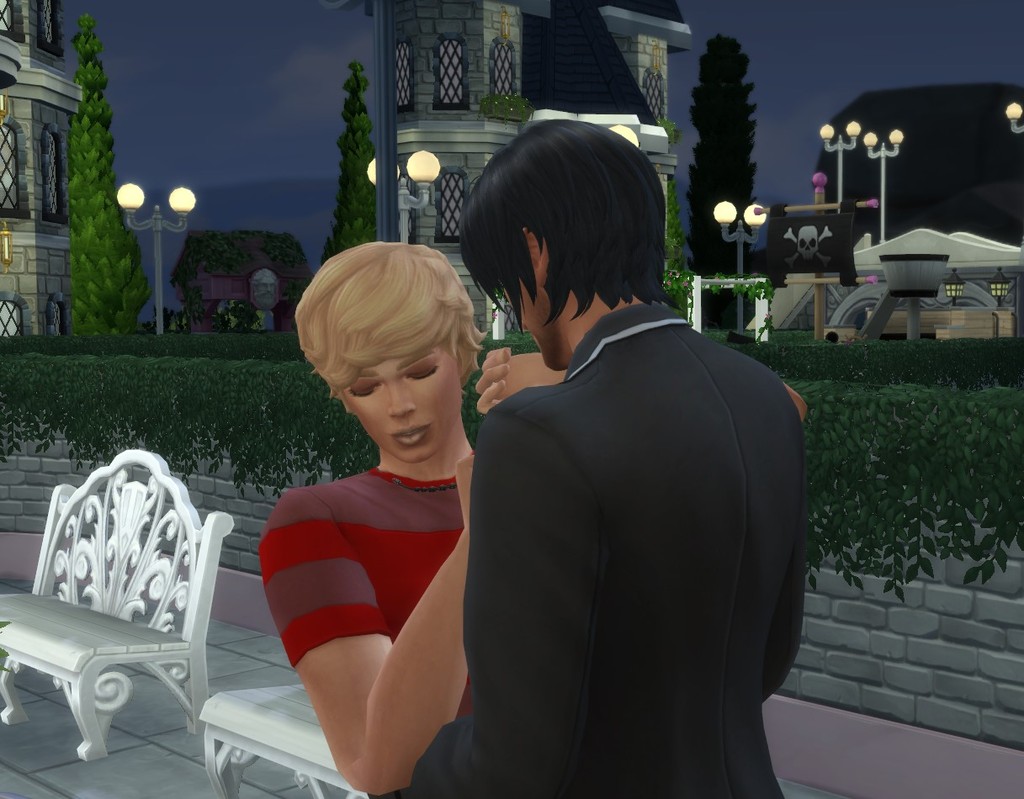 “Not like that, Knight.” His eyebrows furrowed as he stormed away, but I wouldn’t let him go.

Wrapping my arms around him, I used all my weight to stop him. “Hey...I was kidding. Don’t be like that.”
​ 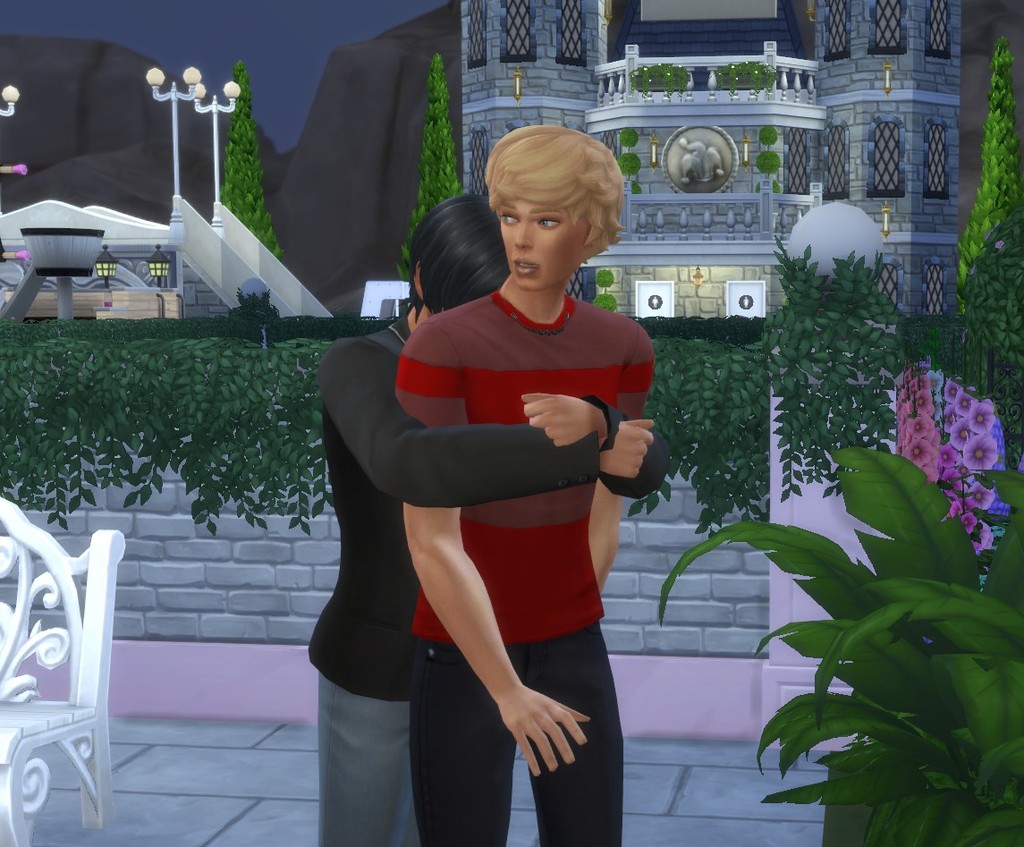 “Come on,” I whispered into his ear, then I kissed his neck. His muscles relaxed and he turned around.

As he inched his face closer to mine, my heart sped up in anticipation. I took in his beautiful features. His long eyelashes, pretty upturned nose, full lips. Our kiss was gentle, soft and warm then it deepened. I got lost in him at that moment.
​ 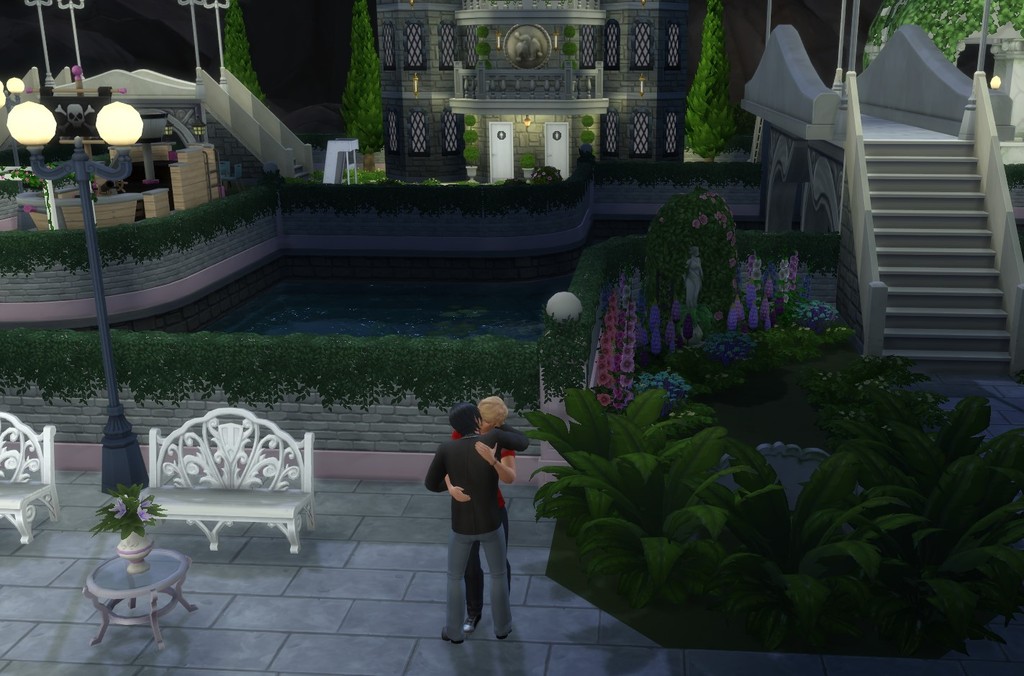 After we kissed for a while, I ushered him to one of the benches. I needed to talk about our relationship. It was so new to me, but I also wanted to make sure Alex understood me.

Taking his hand, I said, “You know back at the movie theater when you were with Chiandra, I said you were my boyfriend. Is that okay with you?”

“Is that what you really want, Knight? I’m different from what you usually date.”
​ 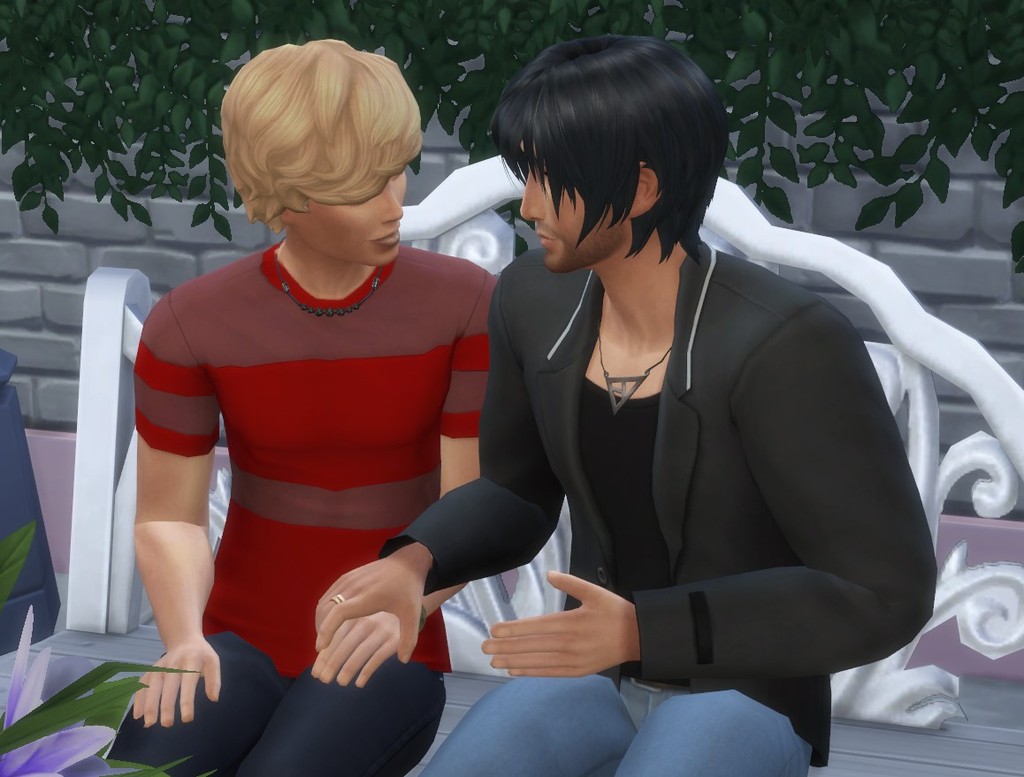 He was referring to Chiandra. And that is exactly why I liked Alex so much. But not just because he was different but because he was the best person I’d ever met. I could trust him. “I’ve never been more sure, Alex. But you’re going to have to help me. I’m not used to this kind of relationship. I might step on your toes. I’m used to leading.”

Placing his other hand on mine, he searched for my eyes. “I don’t mind if you lead.”
​ 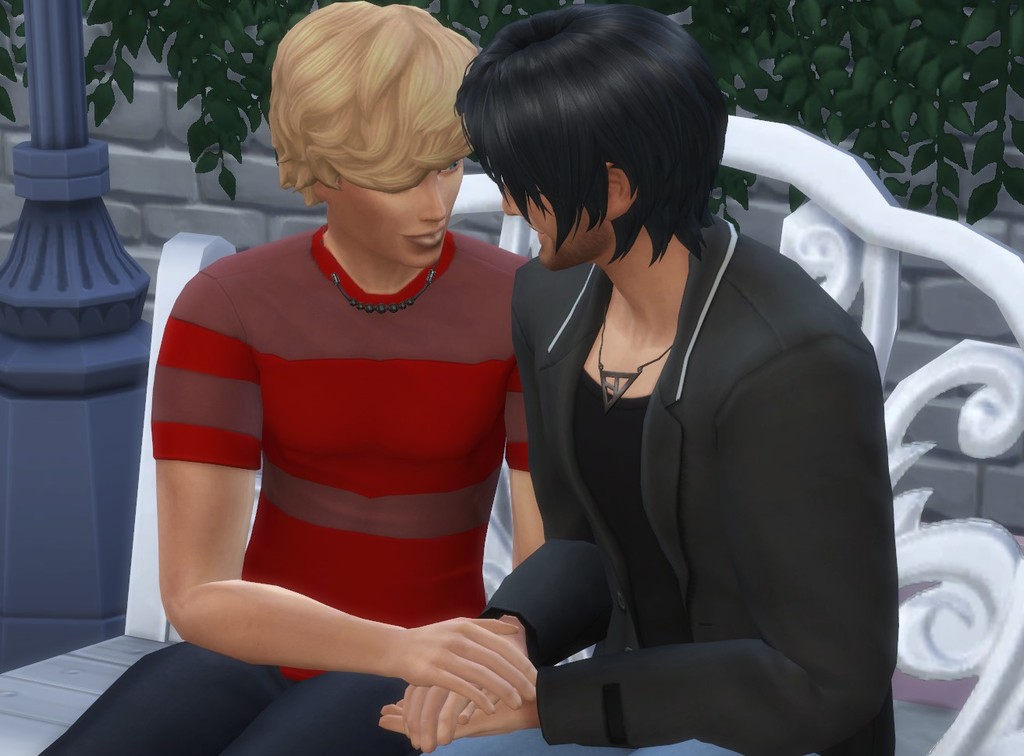 Feeling him shake under my hands, I moved closer and kissed him. I could feel the hard muscles in his back as I pulled him even nearer to me. Delighting in the warm urgency of his tongue, I knew with all my heart that I needed Alex. We kissed like that beneath a blanket of stars and a full moon.
​ 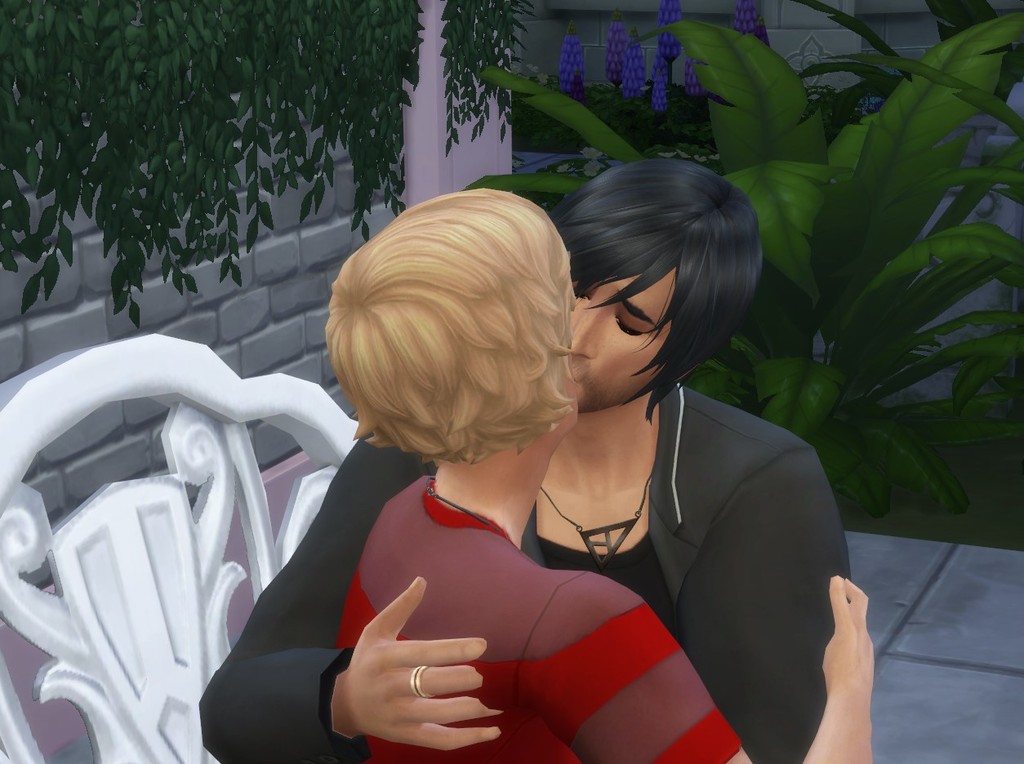 I couldn’t believe Knight and I were together. Making out in the most romantic setting. 24 hours ago, I would have bet all the money I had something like this would never happen.

Knight sat between my legs, looking up at me. “How come you’re so beautiful? I can’t stop staring at you.”

His words made me blush. No boyfriend had ever complimented me the way he did. I didn’t know what to say.

“Does that make you feel embarrassed?” he asked. 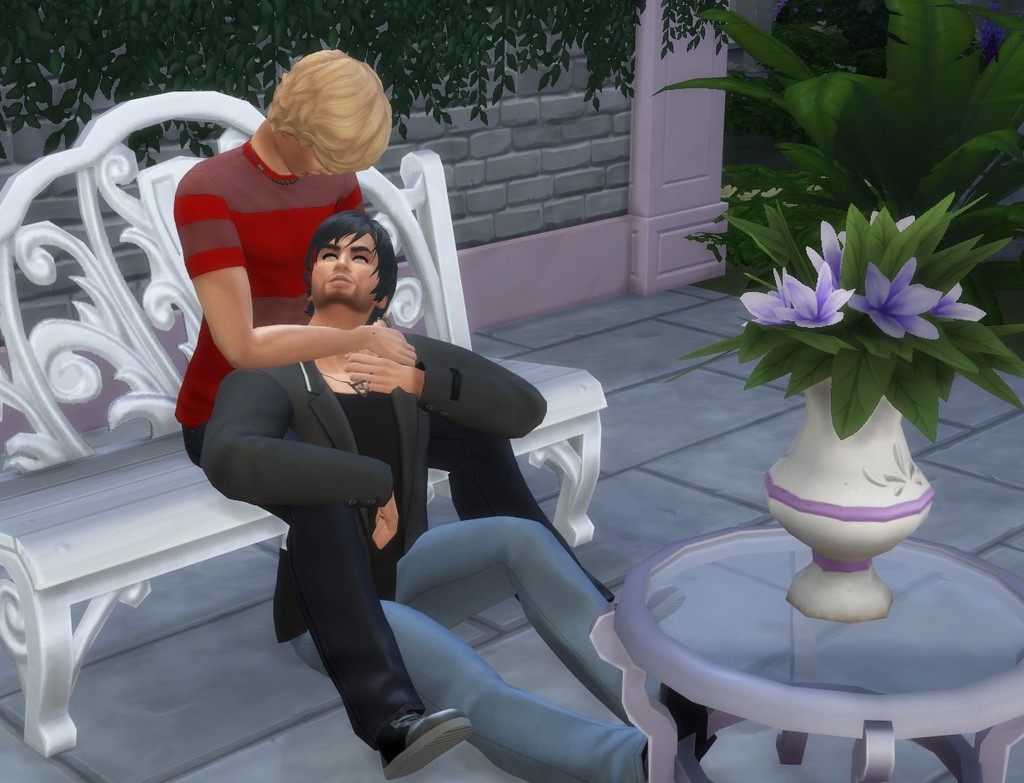 We walked around the park as a gentle breeze swirled around us. Strolling over a bridge, Knight stopped and wrapped his hands around my waist. I bent my knees and sank into him. He felt so good to me. I didn’t want the night to end.

“Where do you see yourself in five years?” he asked. It was an out of the blue question and caught me off guard.

He kissed my ear, sending shivers down my neck and I snuggled closer. His deep voice rumbled in my ear. “I see myself with you in five years. Does that sound scary to you?”

I closed my eyes then opened them, staring at the glowing full moon. “No. I see the same thing. I have a connection with you I’ve never had before. It’s crazy.”

He squeezed my arms. “I’m glad. We’ll need to talk about things then. I don’t want to mislead you. Getting mixed up with me could cause problems because of my legacy. I have to produce an heir.”
​ 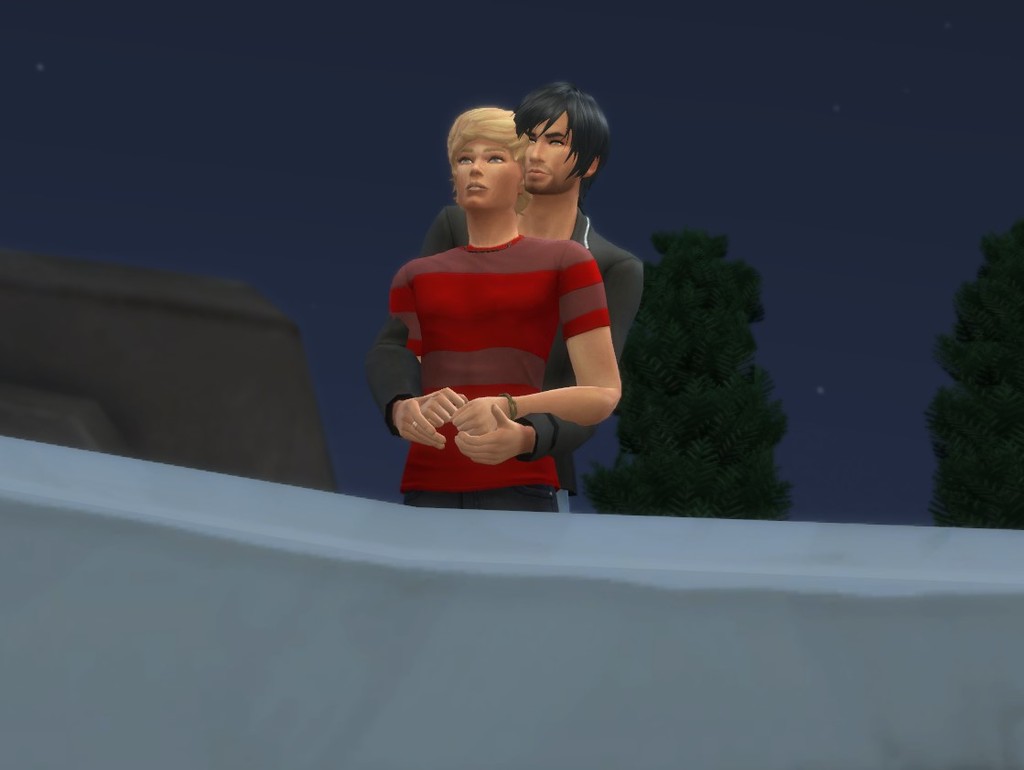 ​My stomach plunged making me feel sick.
Powered by