It took me an hour just to figure out what to wear. I was going to a heavy metal concert so I didn’t want to dress up too much but I also didn’t want to look like a slob.

I arrived a bit late. The concert had already started, and I had the immense task of finding Alex. He said he’d be on the front row, so, I just had to mill between all the screaming fans. Starlight Park was amazing. I’d never been here before. 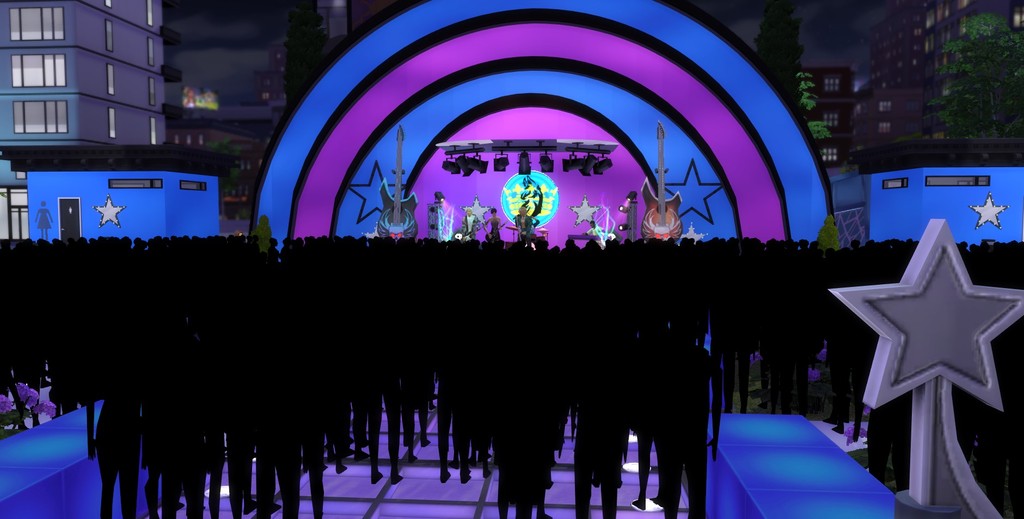 Once I found Alex, he gave me a hug and tried to talk to me, but I couldn’t hear anything. We both laughed and just listened to the raw, emotional music that sent shivers down my spine and sometimes tears in my eyes. When I spied Jackson, I just couldn’t believe how he’d changed since I saw him in high school. Sure I had his posters, but seeing him up close was different. Watching him gave me chills. He knew how to work the crowd. He was so talented. 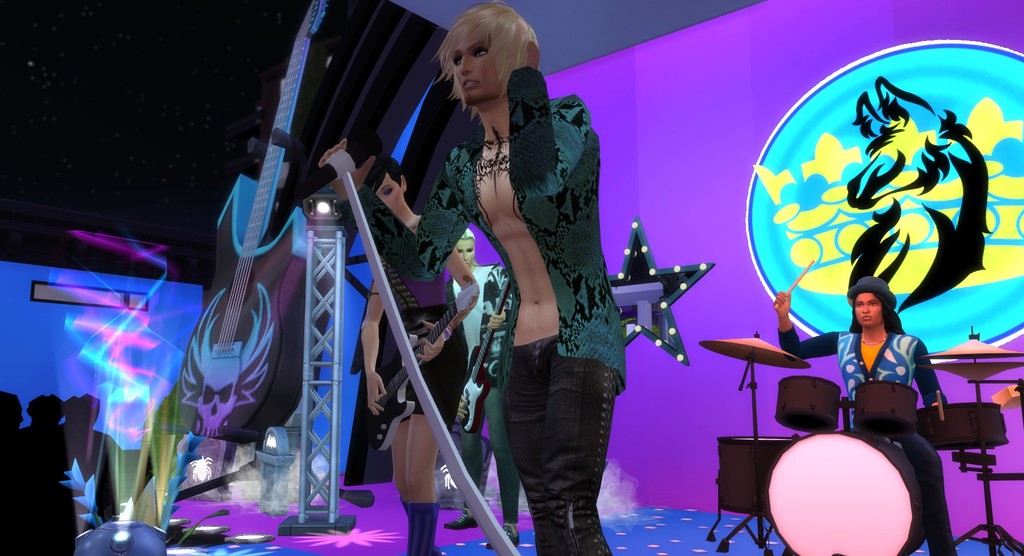 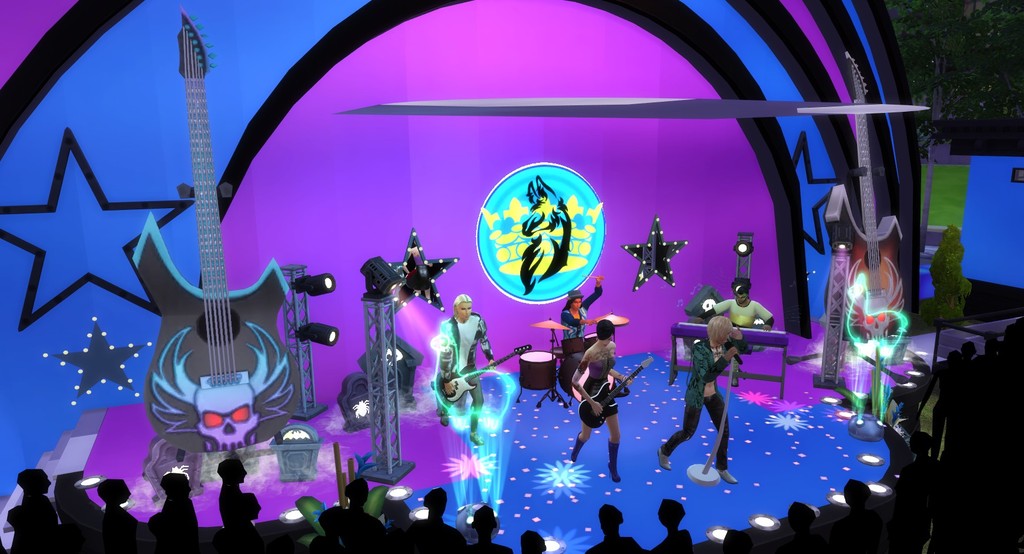 After the concert was over, Alex ushered me down to the basement where the band took their breaks and changed. My heart sped up. I’d never been backstage before. I wondered what Jackson was going to think about seeing me after all these years.

When Alex brought me into the room, everyone said hey and popped up to give me a hug. I felt so welcome. It was good to see Manu, Clarke and Mako, too. I didn’t know Lane very well since he went to a different high school but he seemed to remember me. He introduced me to his wife, Petra. I couldn’t believe someone was already married in the band.

“What brings you here, Luci?” Jackson asked. “What a great surprise.” 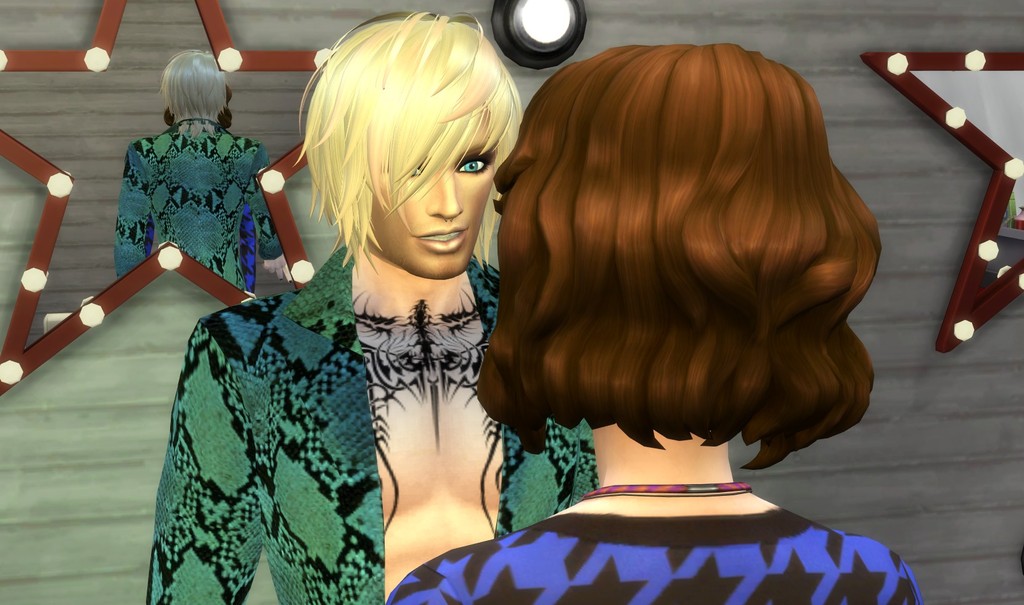 Face heating up just being near him again, I said, “I’m here reporting for a magazine. I was wondering if I could ask a favor of you, Jackson.”

“Sure. Anything for an old friend,” he said, beaming.

I was so happy. He was the same old Jackson. He might have had a bunch of tattoos and make up, but underneath it all, he was as humble as ever.

“I need an exclusive interview from you. Would you be up for that?”

Smiling, he said, “I’ll do better than that. Why don’t I get changed and we can go to Starbucks like we used to? It’ll be just like old times.” 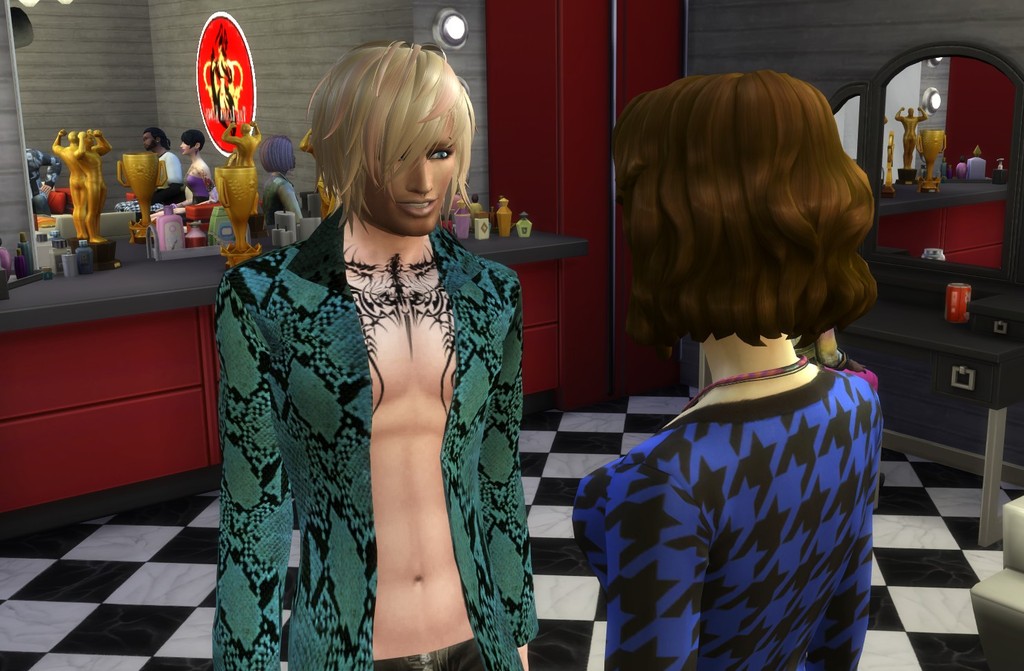 “Okay,” I said, not believing all of this was happening.

“Oh, wait.” He snapped his fingers, chuckling. “I haven’t been able to go to Starbucks in years. We’ll get mobbed. But I do know an old park that not many people go to. I think you’ll like it. It has an outdoor theater, too. Maybe we can watch cheesy movies like we used to back in the day.”

At this, Mako interjected, “But Jackson. What about the after parties we’re supposed to attend? Our sponsors expect us.” 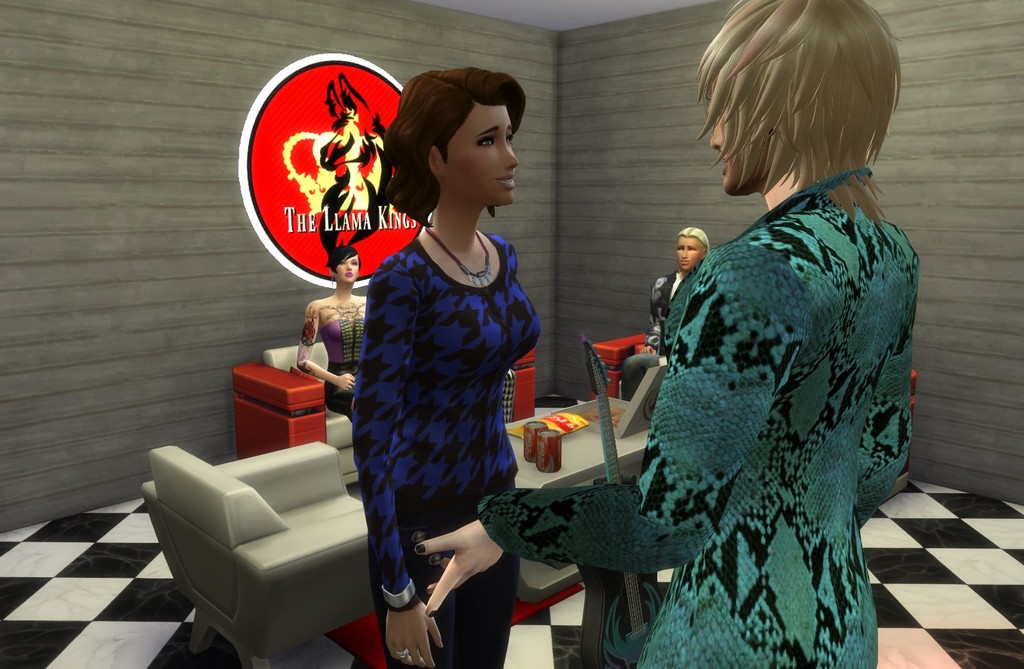 I could hear the edge in her voice. Was she jealous? Of me? That didn’t make sense.

Taking me by the hand, Jackson squeezed it sending flutters inside. “Could you wait out in the lobby for a minute? I need to talk to my band.”

I smiled. “Okay. Take all the time you need.”

I walked out the door, looking at the pictures on the wall. The bodyguard smiled at me. I still couldn’t believe all was working out better than I’d expected. I should have known Jackson wouldn’t have changed. 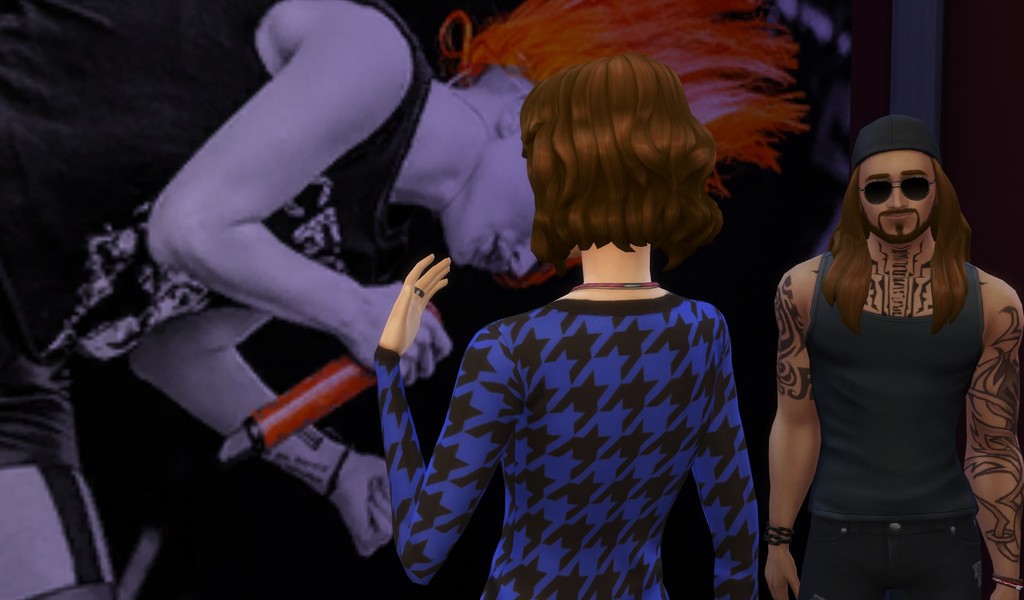 Luci Mueller. I couldn’t believe she was here. Seeing her sent me back to the days when I tried to win her heart. And she was as beautiful as ever. I was excited to catch up with her. I’d always wondered whatever happened to her in Windenburg. And now her pretty face was smiling up at me. 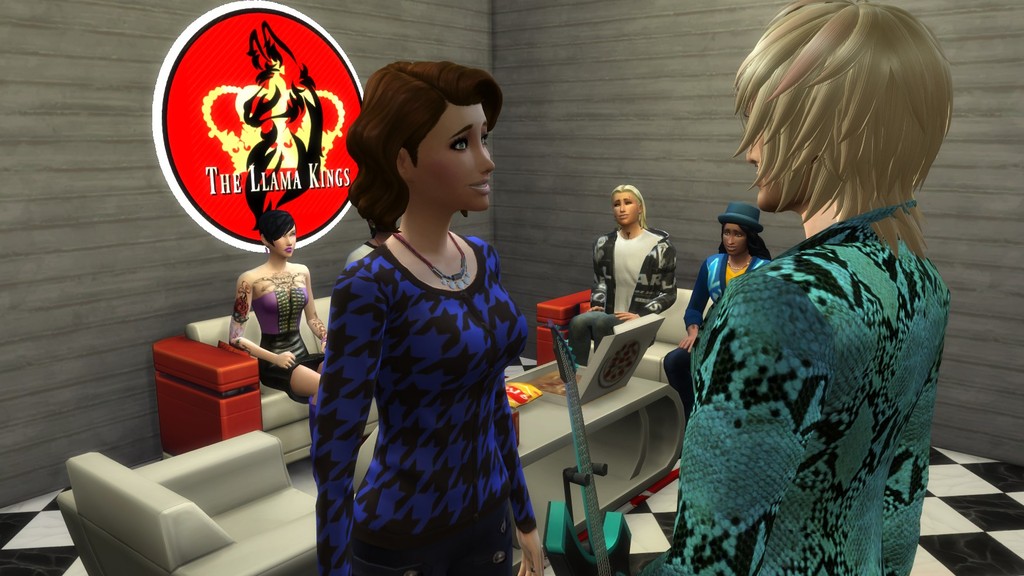 When she left the room, Mako was on me in a second.

“What do you think you’re doing? You can’t fly off with Luci and leave us holding the bag with the sponsors.” 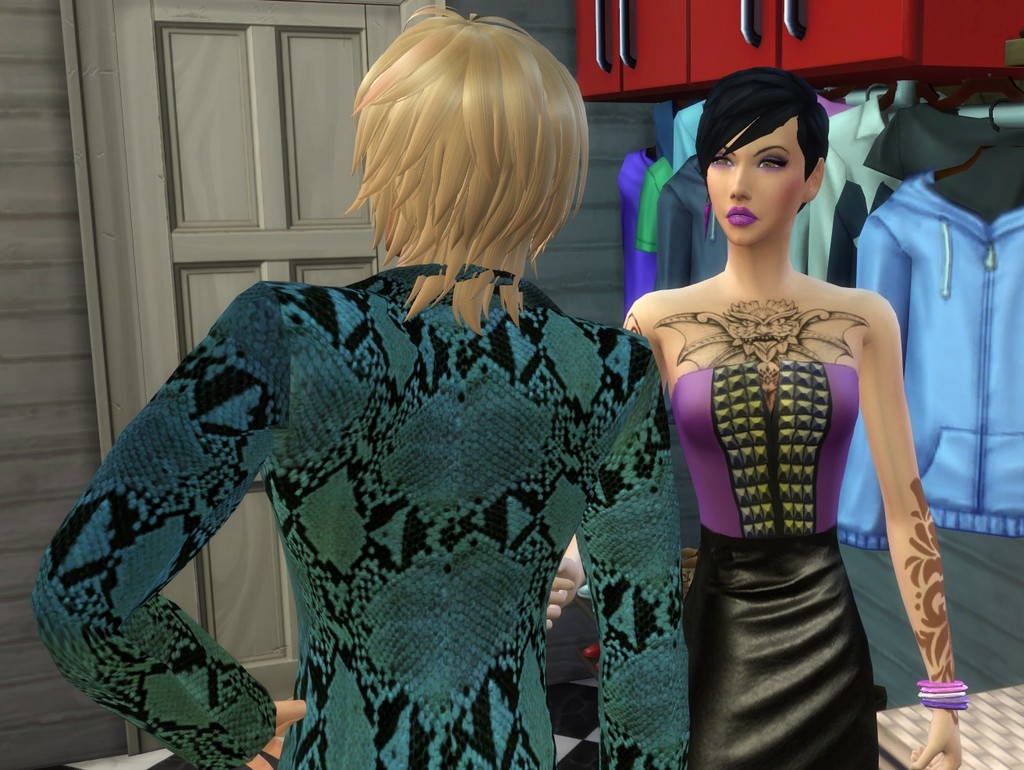 “Why don’t you get Noah? He’s your partner in bed. I’m sure he could fill in for me.”

“What are you talking about?”

I crossed my arms. “Oh, stop playing Miss Innocent. I saw all of you in my bed this morning. It’s over, Mako. If you want to mess around, you’ll do it without me.”

“We weren’t doing anything wrong. Just sleeping. We had a few friends over. It was no big deal.” 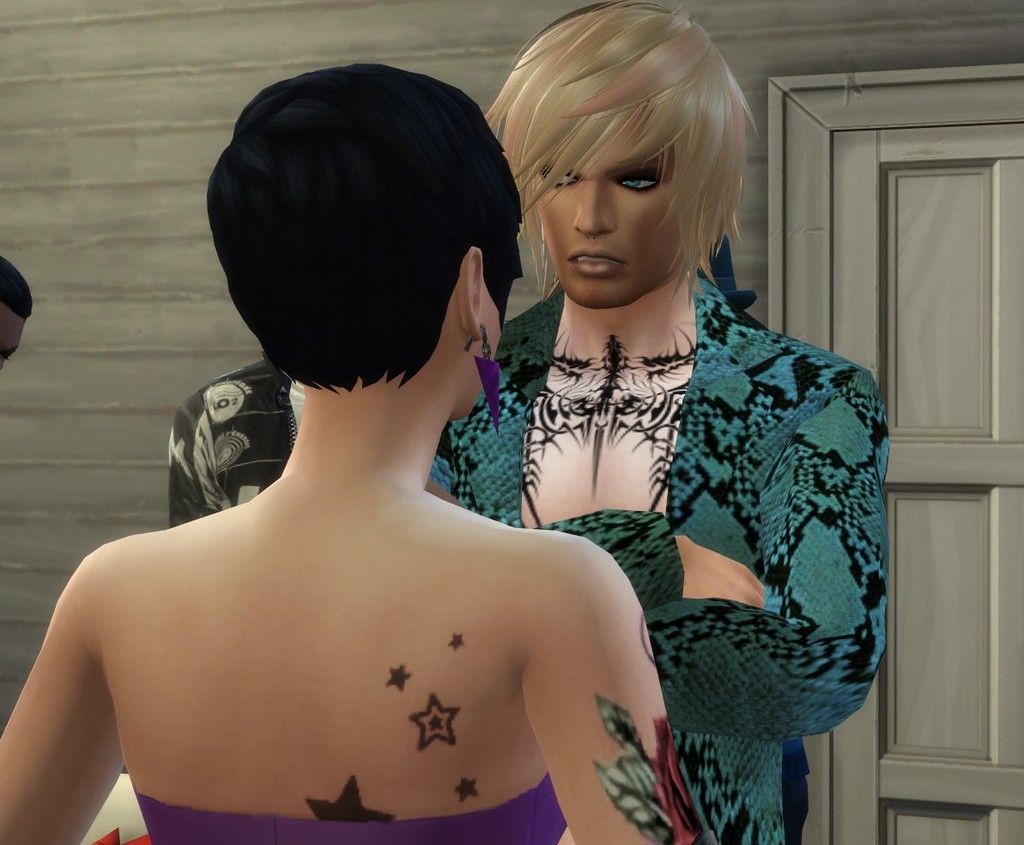 “Noah is a big deal. You were snuggling with him in your underwear! Whatever. I’m done with us. So over it.”

“I can’t believe you’re acting like such a jealous prick. I didn’t do anything wrong. Ask Manu. Ask Clarke.”

“You invited Noah to our house. That’s telling enough. You know how I feel.” 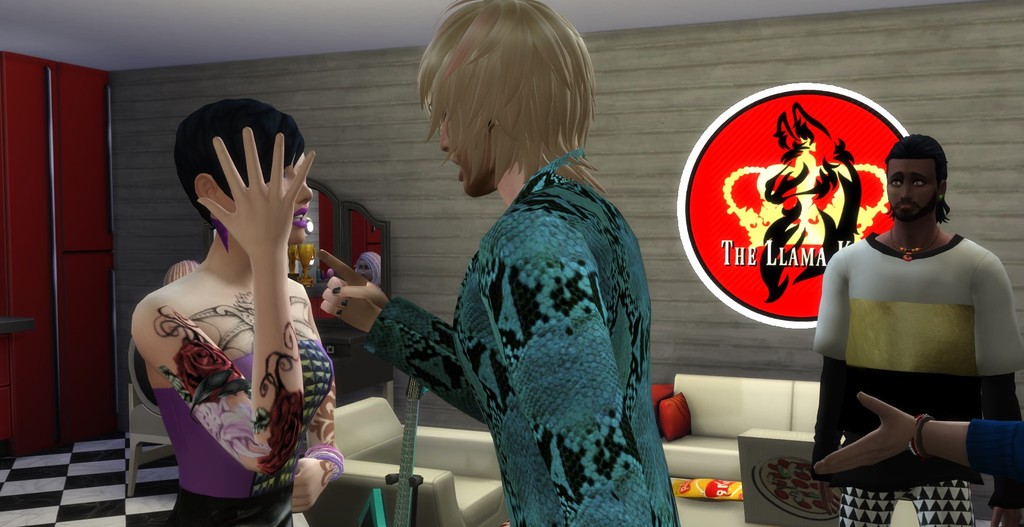 I turned to go to our private bathrooms. I needed to wash off this makeup and put on a shirt. Mako grabbed me from behind and said, “Please, Jackson. I love you. I wouldn’t do anything to hurt us. I wouldn’t.” 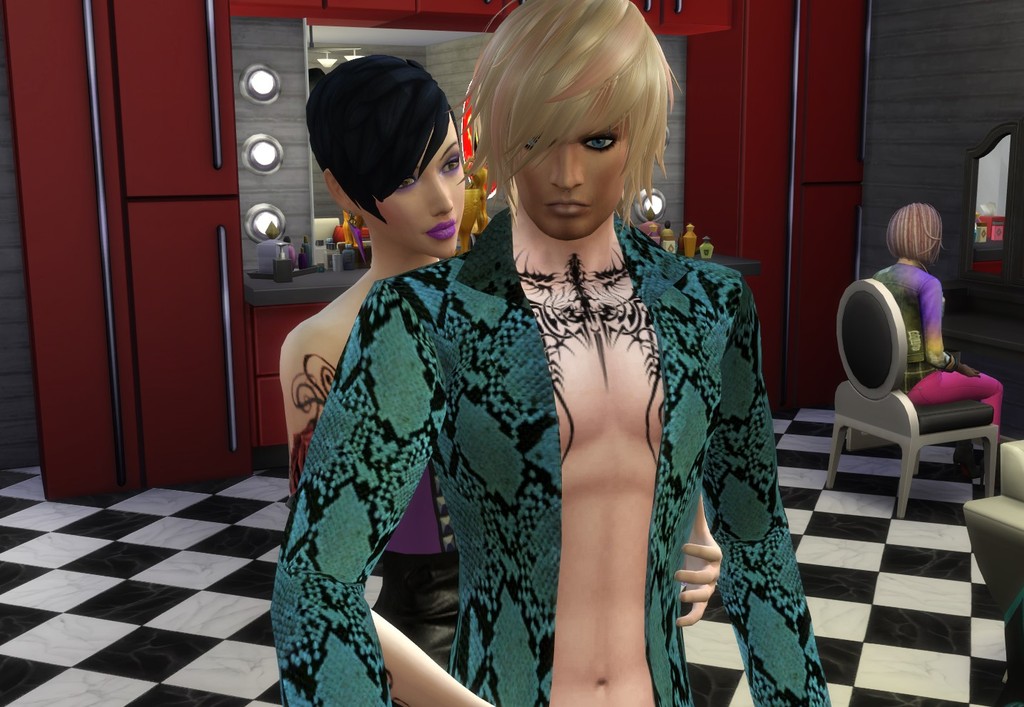 But I was finished listening to her. I shook her off and said, “You sure have a sick way of showing love.” I stalked out of the room.

At the park, Luci told me all about how she got a journalist degree from Windenburg University and was now working for a tabloid in the heart of that city. She lived in a small flat, barely making ends meet. She felt funny even asking me for the interview.

I laughed. “Luci, you don’t ever have to feel embarrassed to talk to me. We’re old friends. How could you ever doubt that?” 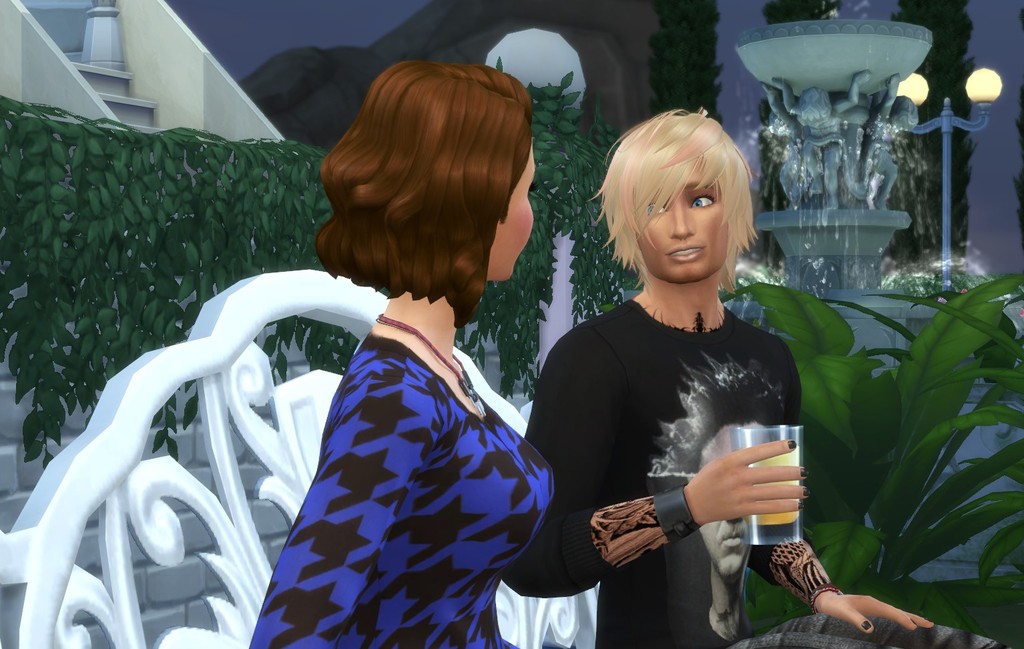 She stared at me, grinning. “You’re right. I should never have doubted you. It’s just...you know...you’re...annoyingly famous. I guess that made me nervous.” 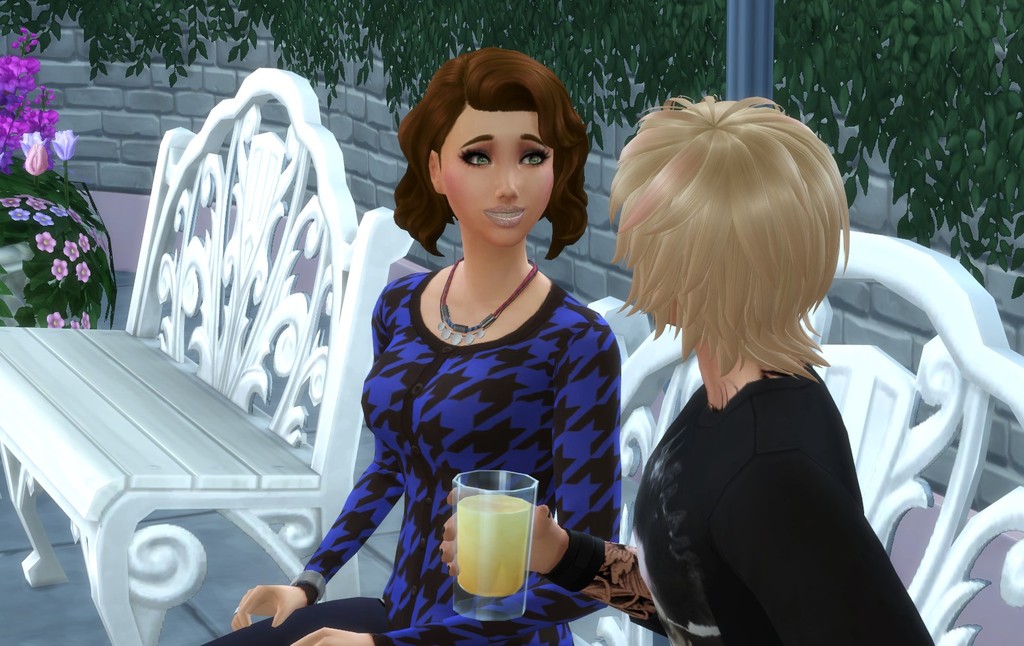 “Well...you haven’t changed since high school. What makes you think I would have? There’s no difference between a famous person and someone else. We live and breathe and eat and love.” 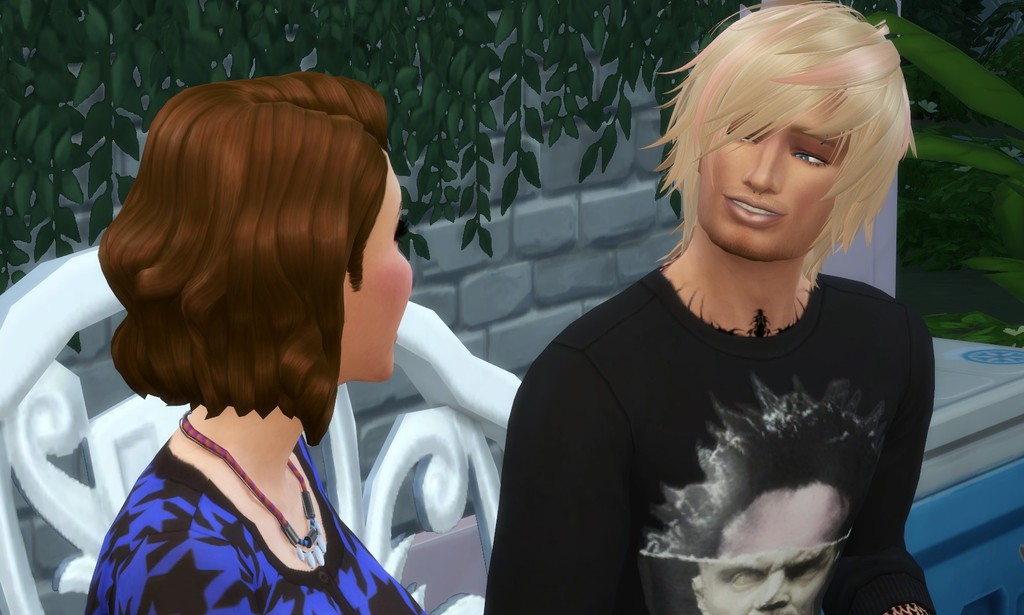 Giggling, she said, “You’re such a poet. Is that going to be the lyrics of your next song?”

“Are you asking me as a journalist or as yourself?”

“What does it matter?”

I shrugged. “Well, I’ll tell you anything, but a journalist...”

She stared at me with her gorgeous crystal green eyes. I remember the first time I really noticed those eyes. When she was yelling at me for not asking her to the Snow Ball.

She nodded. “I am a journalist. You’re not going to change that. You’ll just have to take me as I am. If I have to put up with you being so famous, then...” 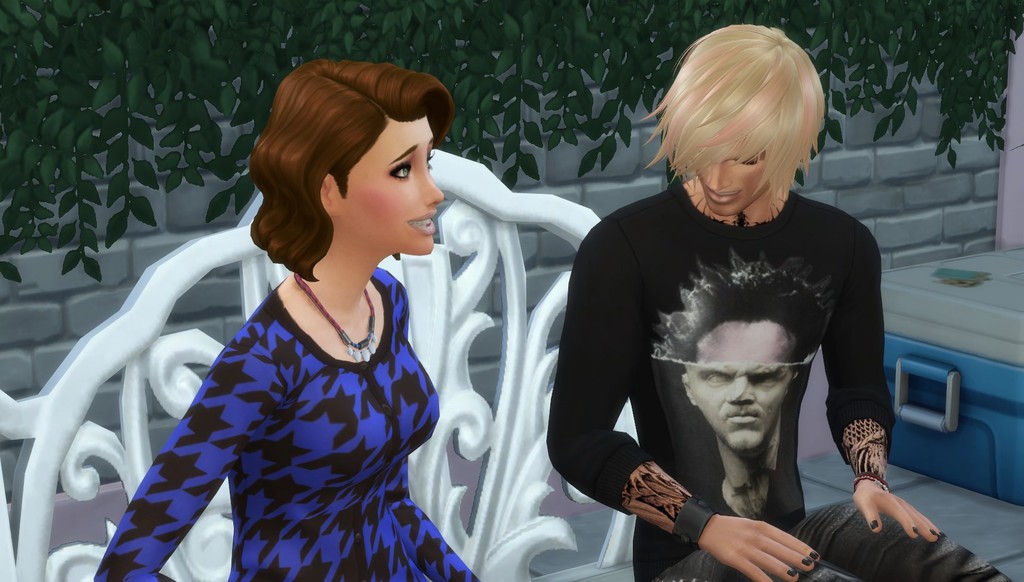 When I said that, our eyes met, holding each other as we did all those years ago when we’d go out together. So many times I’d wanted to kiss her back then, but I wouldn’t let myself since I’d just broken up with Celia. And now, I’ve just broken up with Mako and here she was, charming me with her strong personality and funny wit. Was I going to lose this chance again?

I knew my answer.

No longer was I going to second guess someone like Luci. She was a diamond that I’d found so long ago and lost. 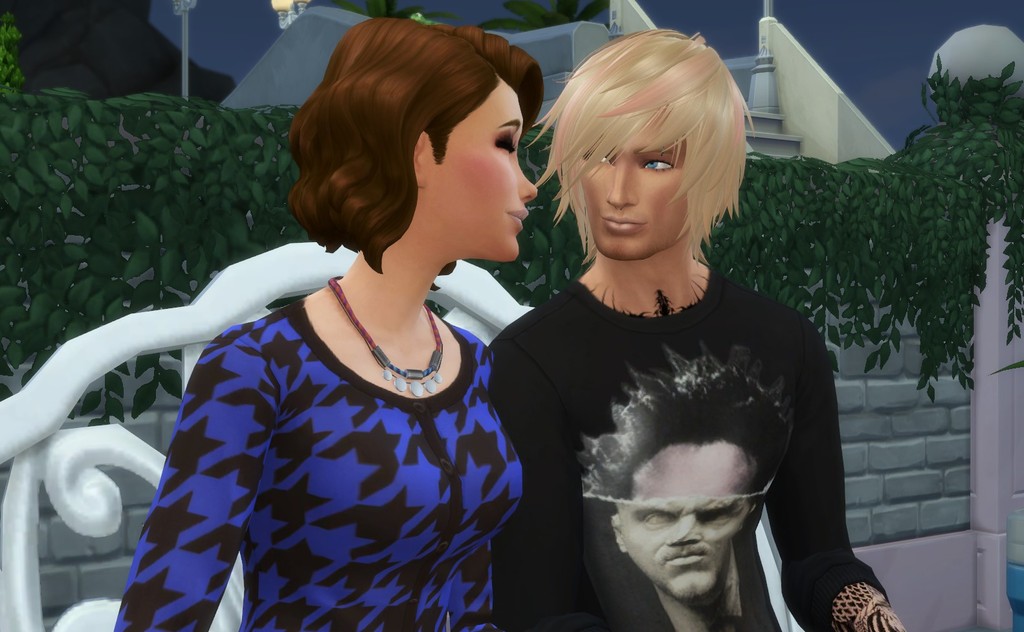 She nudged me, playfully. “I never understood why you didn’t make a move all those times we went out. I all but sent out flashing signs encouraging you to whenever we’d watch a movie.”

“You did.” I nudged her back. “I was such a fool. But then you didn’t let me that day I found you in Lana’s basement.”

She fiddled with her hands, looking down. “I know. But...I saw you...at Winter’s party. There was something between the two of you. This chemistry...I didn’t want to get in the way.” She lifted the side of her mouth and looked at me. “And besides, I’d made a pact with myself I wouldn’t date until after college.” She laughed and shrugged one shoulder. “That’s what I told myself anyway.”

I wrapped my arm around her. “You’re not in college now...”

Looking at my hand, she blushed. “No...but I live in Windenburg.” 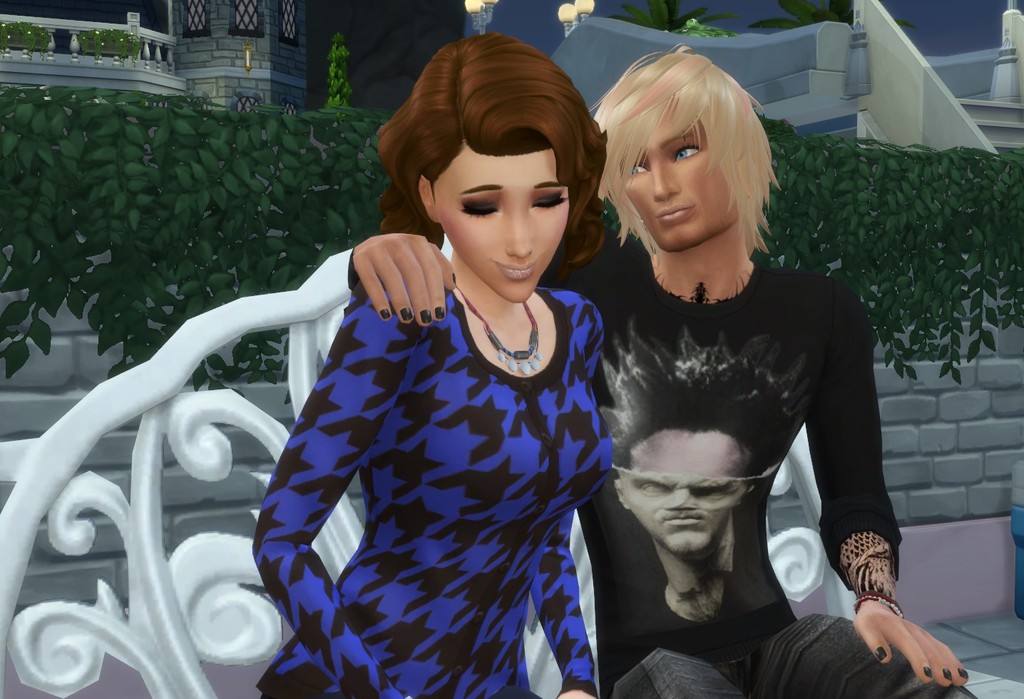 “I own a jet airplane,” I countered.

“You travel months at a time.”

“I make my own schedule.” 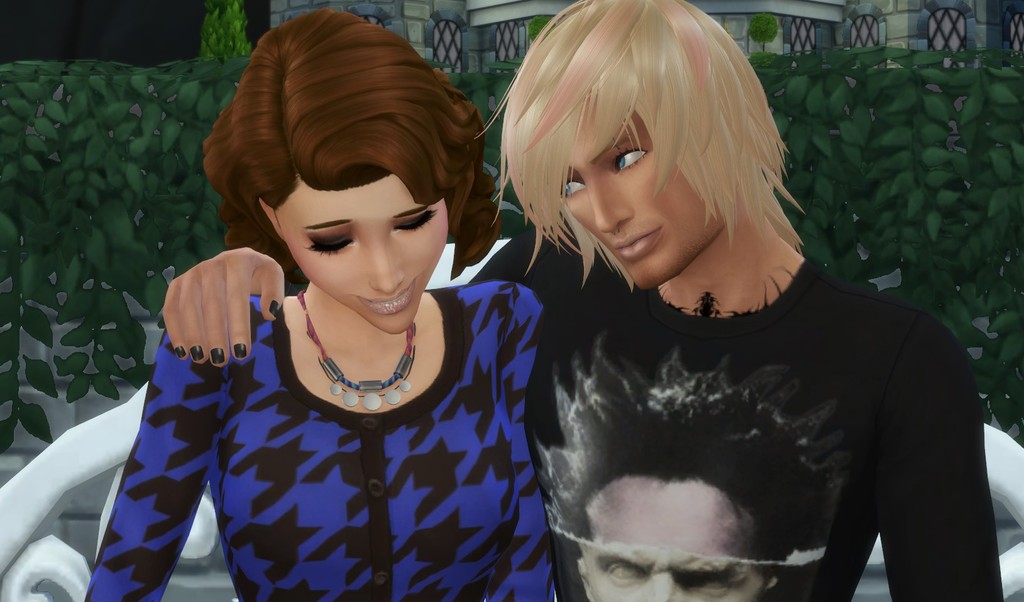 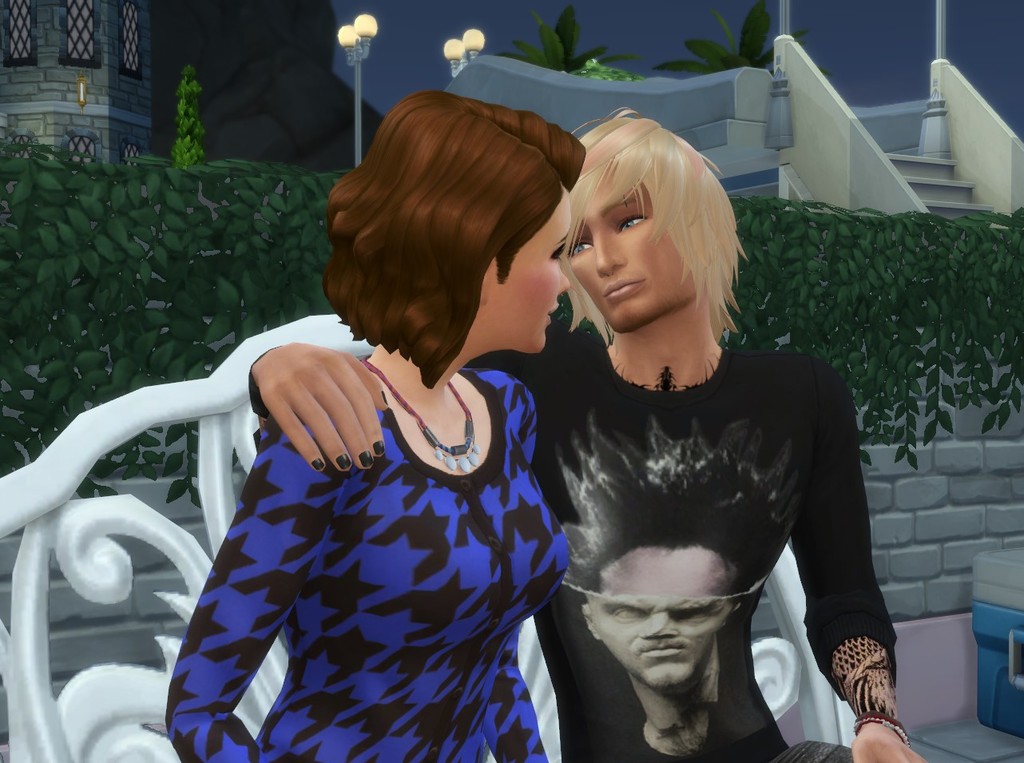 “When did you break up? I just read about your perfect romance in Rollingstone.”

“First rule of thumb when dating a famous guy is never believe anything you read in print.”

She giggled. “Oh really...what about the pictures?”

Shaking her head, she said, “It would never work, Jackson.”

Rubbing her face, I said, “I’m not going to leave you alone until you say yes. Luci, I would regret it for the rest of my life if we never gave us a chance. I know you feel it just like I do. A connection that doesn’t happen very often. Maybe I’m just making this up, but for me, it feels like something I don’t want to let go ever again.”

When she didn’t say anything, I said, “Will you give it some thought at least?”

Gazing into my eyes, she smiled, shyly. “Okay...I promise. I’ll think about it.”

“Yes!” I cheered, pulling her to her feet.

Walking arm and arm, I took her to the bridge. Before we'd left for the park, I'd ordered fireworks to be set off at 10 PM, and I wanted to surprise her.

“It’s a gorgeous night,” she said.

Nodding, I agreed, “It is, but not as gorgeous as you.” 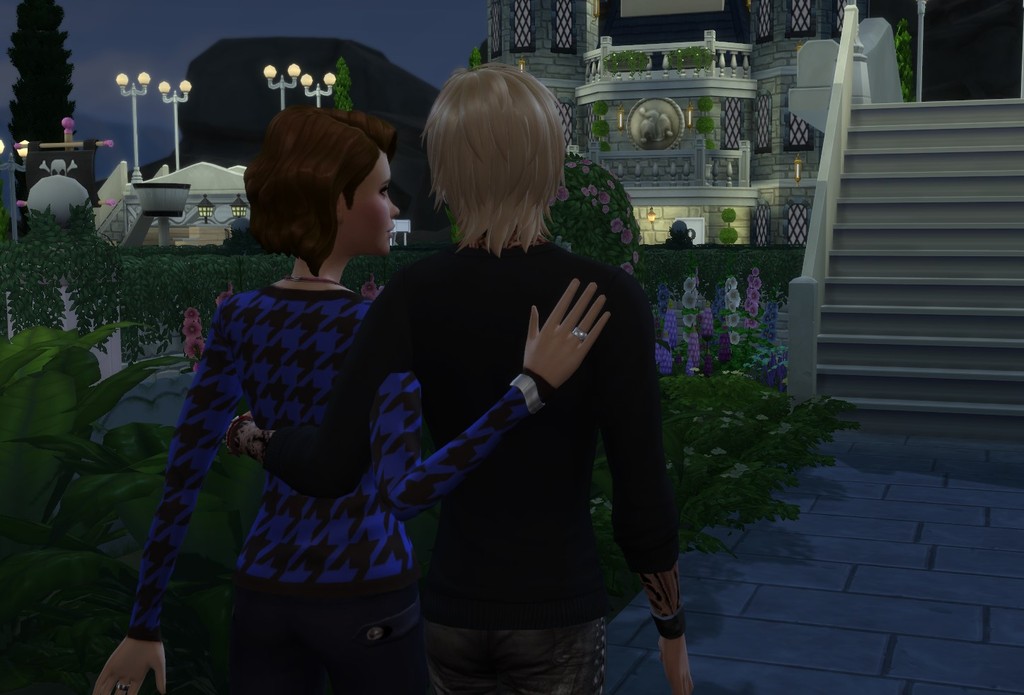 She pushed me and said, “Jackson...I bet you say that to all the girls you’re with.”

Reaching the top, I gathered her into my arms as the fireworks went off. We snuggled not saying anything, just enjoying each other for the moments we had on this night. I didn't want to think about the future because in the back of my mind, I worried I couldn't convince her to take a chance on me. And a part of me couldn't blame her. 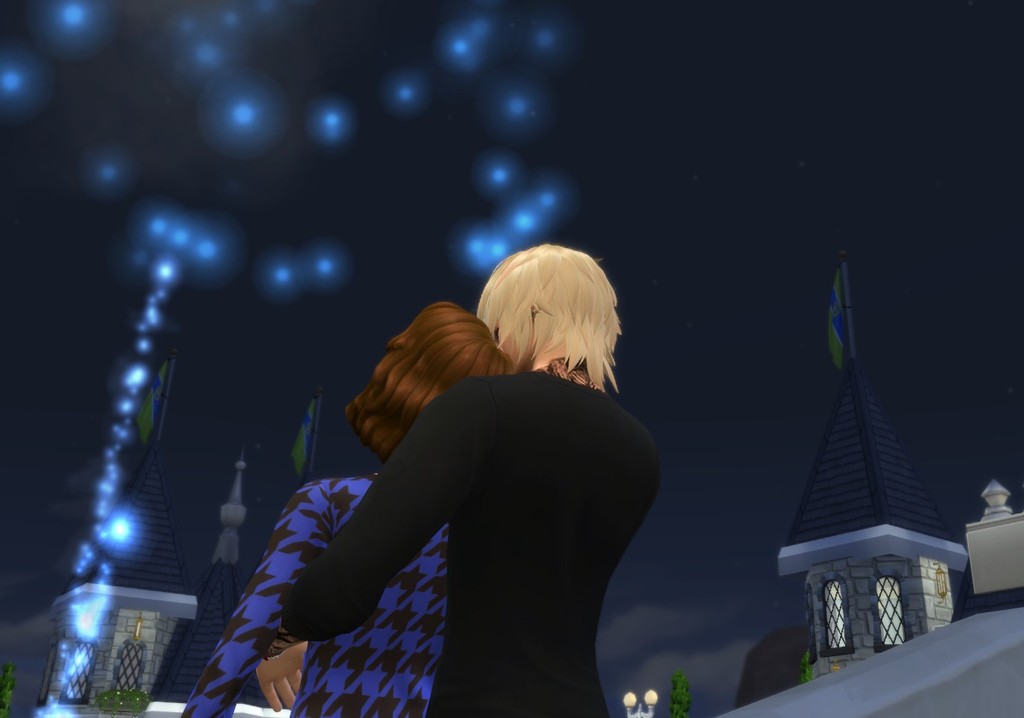 My life was definitely not an easy choice to make for a strong relationship. But if anyone could handle it, it would be Luci. 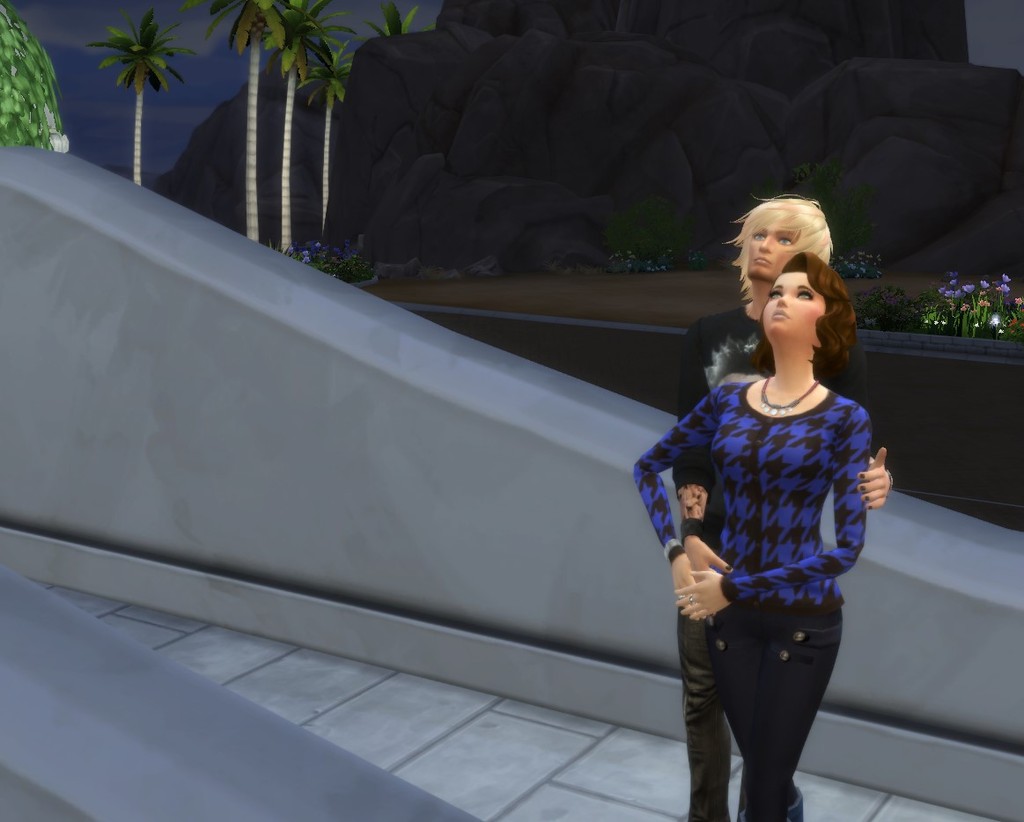 Note: Many thanks and a shout out to designer, RABOOSKI for creating this FABULOUS park: A STAR IS BORN PARK Please show your appreciation by hitting the favorite button! It's so beautiful! Jackson couldn't be such a superstar without her!

And so, it's officially spring break for me. Unless something changes, I will be out of pocket for a week. See you next weekend!
Powered by